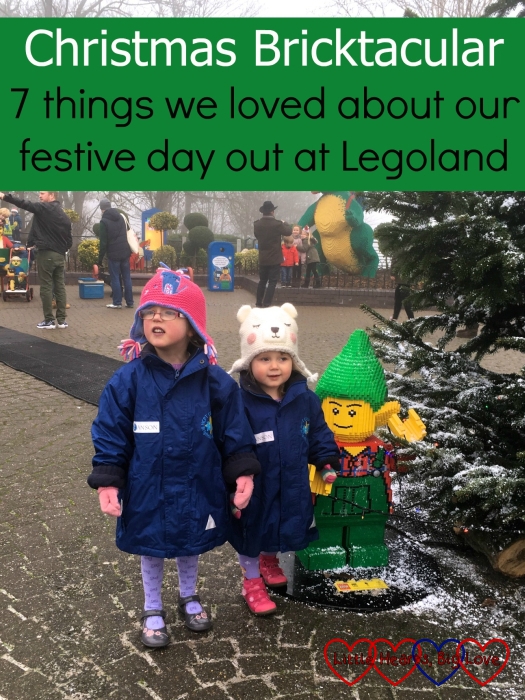 Seeing Father Christmas at Legoland was a magical experience. The girls loved being led by an elf through a maze of pretty Christmas trees to Santa’s cabin, where they were greeted and asked what they’d put on their Christmas list. I loved the cosiness of the interior of the cabin and the clever set-up of the maze. From a grown-up height, you can see several cabins around the edges of the maze, but the children can’t see over the trees. As far as they are concerned, there is just one Santa and they are going to see him. 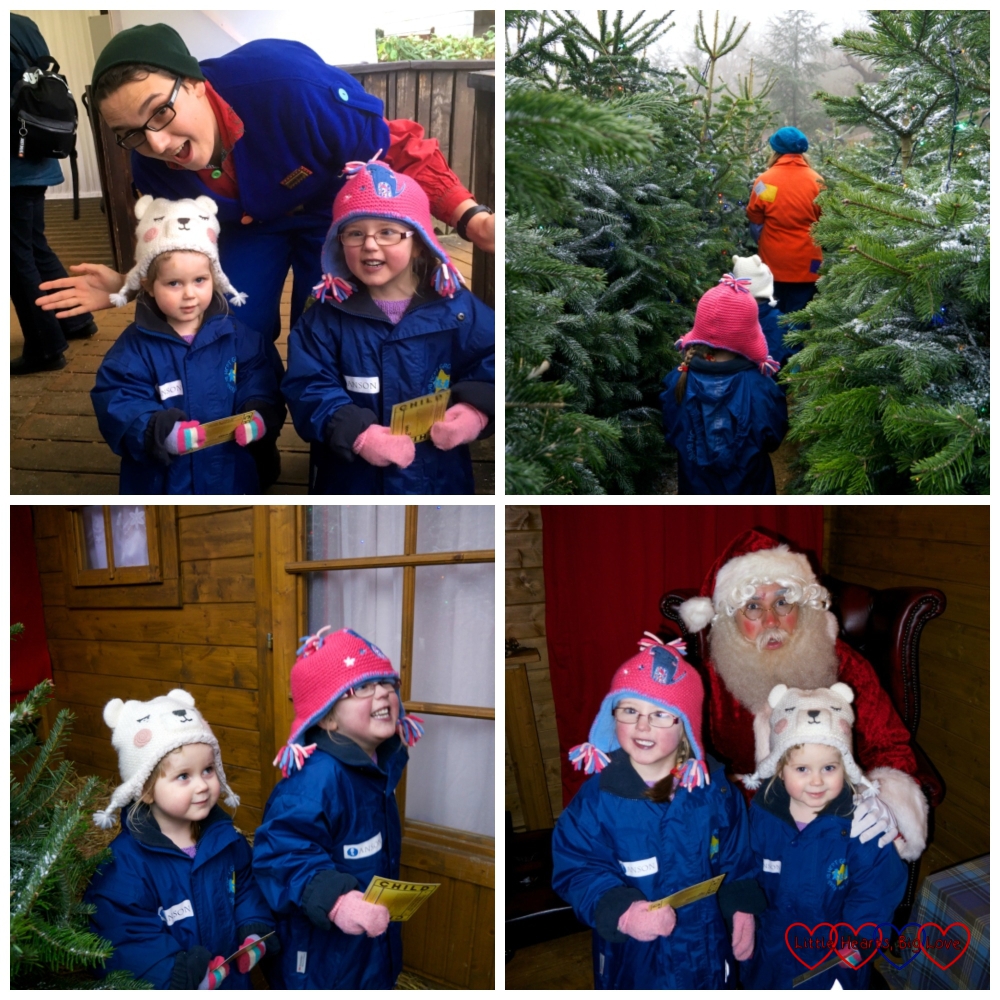 Last year we booked our visit for late afternoon. It was more magical in the dark as the cabins around the maze were less visible. However, we were glad we saw Father Christmas earlier in the day this year as there was only a short queue when we arrived for our timed slot. Later in the day, the queue was very long which hadn’t been the case the previous year. It’s a shame that a photo with Father Christmas isn’t included in the ticket price. We were able to take our own too though instead of having to pay another £10 for a photo of the girls with Father Christmas.

The girls got a present each from Father Christmas in a colour-coded printed sack. Jessica had a cuddly toy penguin which she was thrilled with and Sophie had a starter set of Duplo which made her very happy too!

There are Christmas trees and lots of pretty light displays everywhere. I loved the lights in the harbour which changed to produce different pictures – such as a Christmas tree or the message “Happy Christmas” – and the lights around the castle in the Christmas Kingdom. Once it got dark, the lights made the park look very magical. 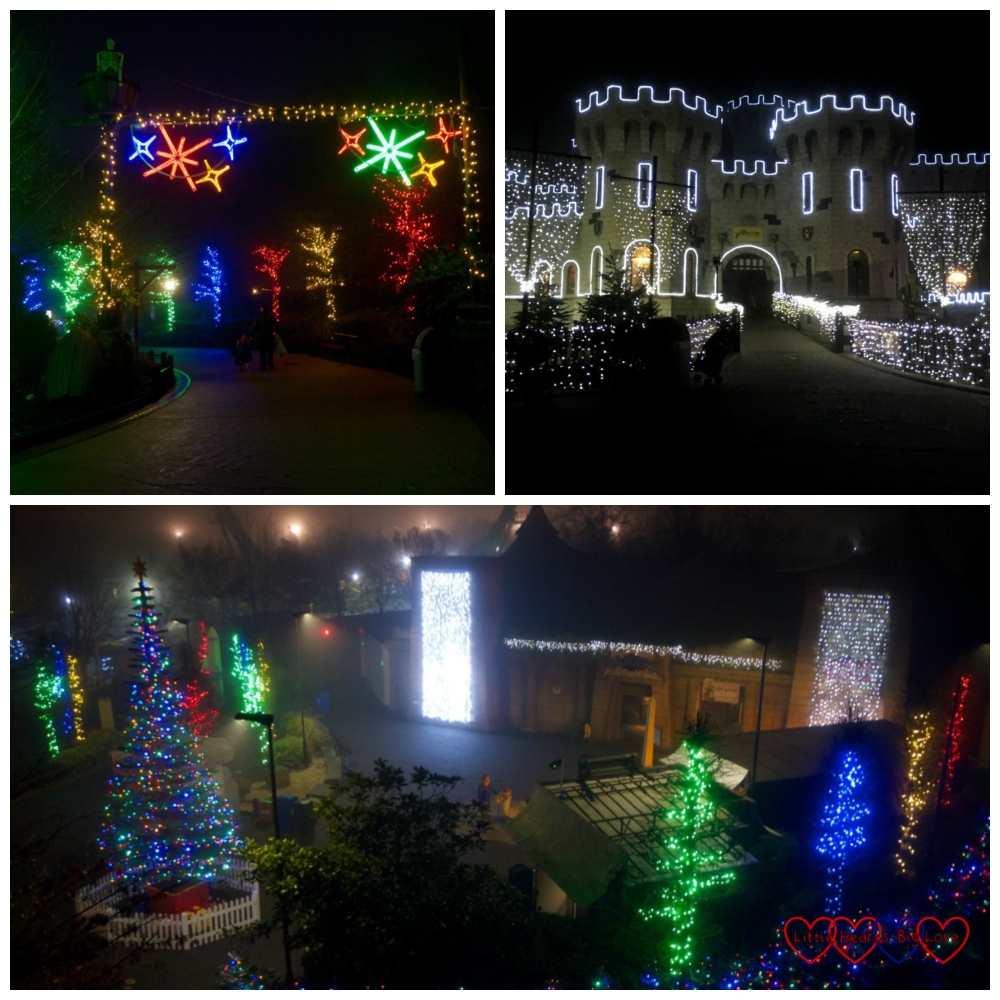 The girls enjoyed getting creative with Lego and helping Mrs Christmas to make snowflake decorations for all the good girls and boys, after she fell asleep in her kitchen and overslept.  Jessica managed to make a snowflake with a bit of help from Daddy. Sophie was happily engrossed in making her own creation using the white Lego blocks we were given. 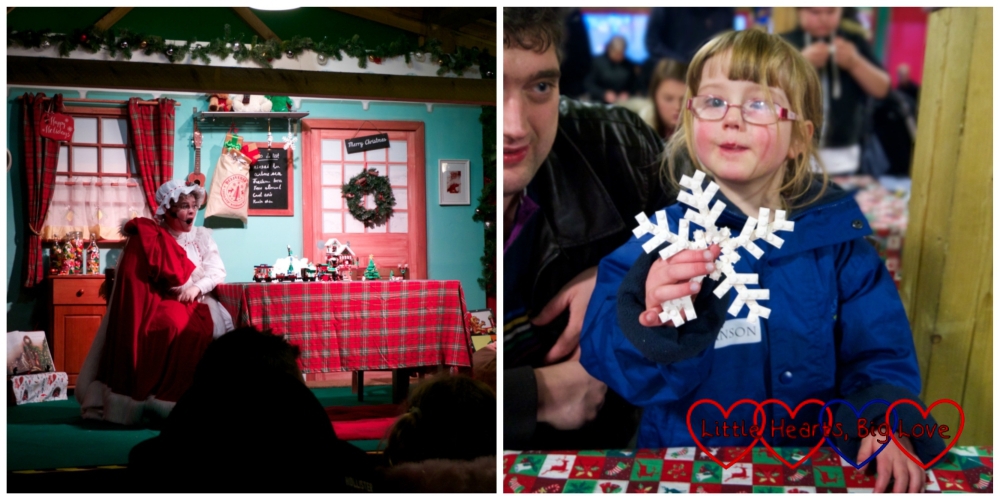 The Elves’ Workshop was another chance for the children to get creative with Lego. We helped make some blocks to form a big Lego snowman. The girls then had fun doing some colouring and making their own creations with the trays of Lego bricks which were set out on all the tables. I couldn’t resist getting creative myself and making a little Lego Christmas tree. 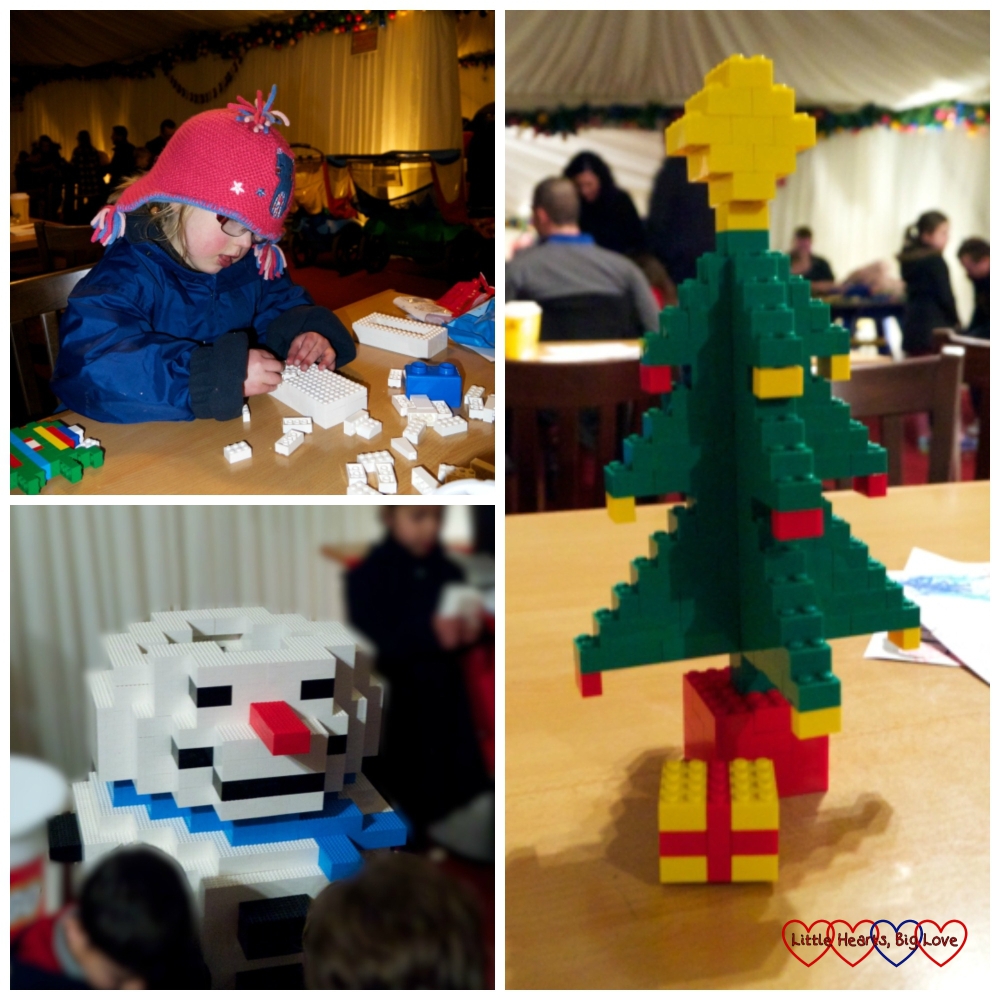 Last year, I was quite disappointed that Miniland wasn’t open for the Christmas Bricktacular. I was glad to see that had been changed for 2016. Most of Miniland was still closed. However, we did get to see what my friend dubbed a “post-Brexit” Miniland consisting of just England and Scotland. I loved all the little festive touches – the Christmas markets, Lego figures playing in the snow and Father Christmas himself flying his sleigh across Big Ben. 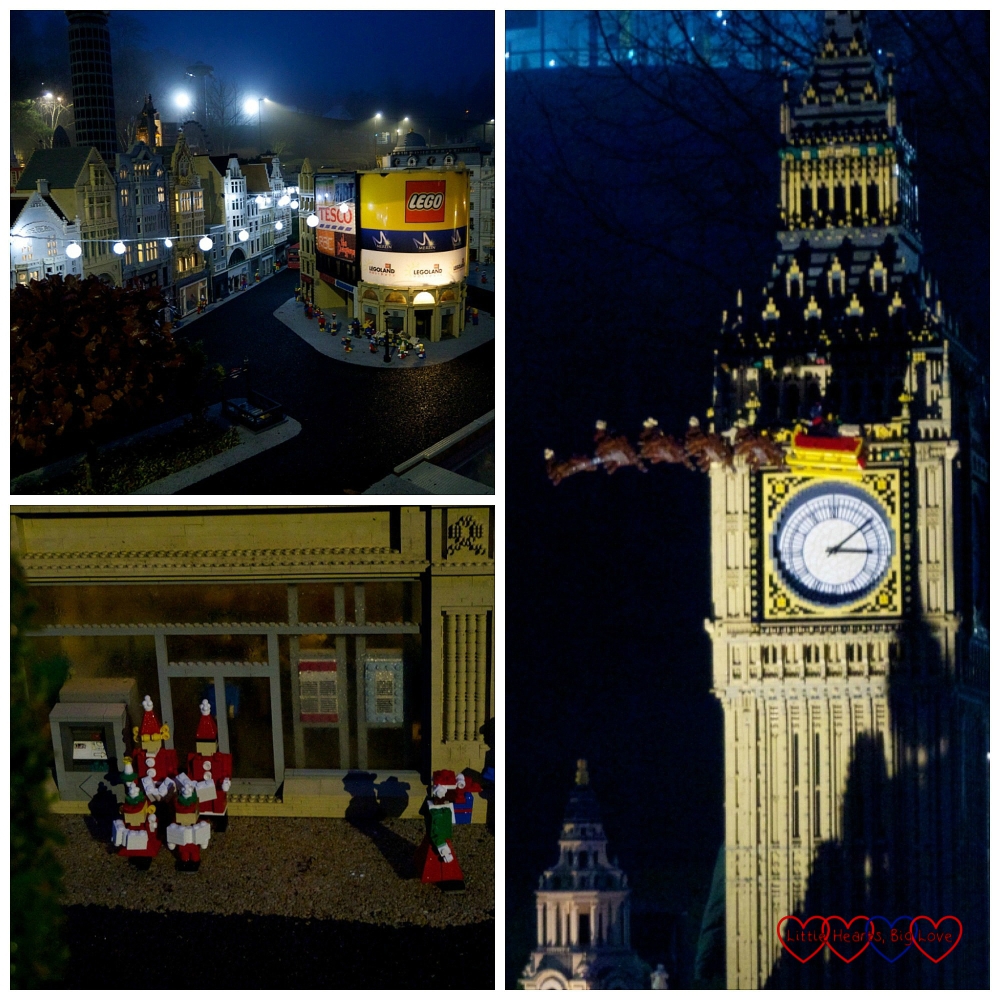 Some areas of the park were closed but there were plenty of rides open. Our favourites at Duplo Valley were closed, but Jessica enjoyed going on the Spinning Spider, Scarab Bouncers (three times in a row), Knight’s Quest (twice) and Thunder Blazer. Both girls loved the L-Drivers, Aero Nomad and Desert Chase. Best of all, the queues were much, much shorter than usual – and non-existent for several of the rides. 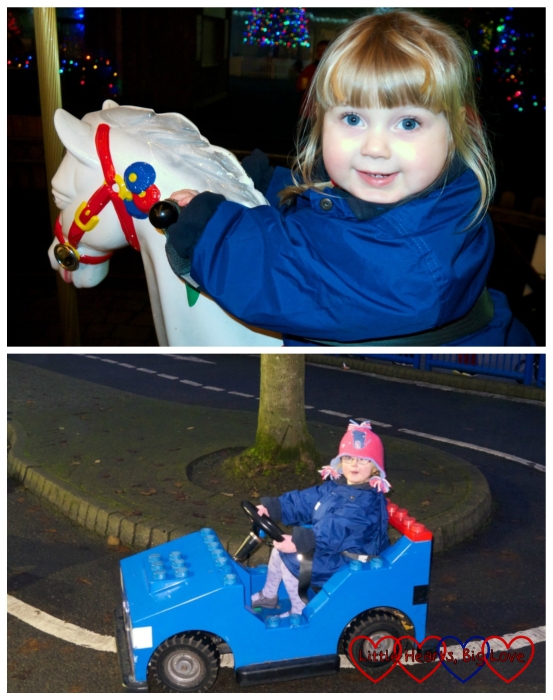 From getting ready to board the Brickmas Express right through to our arrival at the Christmas Kingdom, the atmosphere was magical. We were given golden tickets for our Father Christmas visit by the elf at the entrance to Brickmas Express. The girls also had a passport booklet each with a map, list of open attractions and things to look out for. There were snow-covered Christmas trees everywhere. Jessica and Sophie were amazed when it started to snow in the Christmas Kingdom. I am sure they believed me when I told them that the elves made magic snow fall just in Legoland! 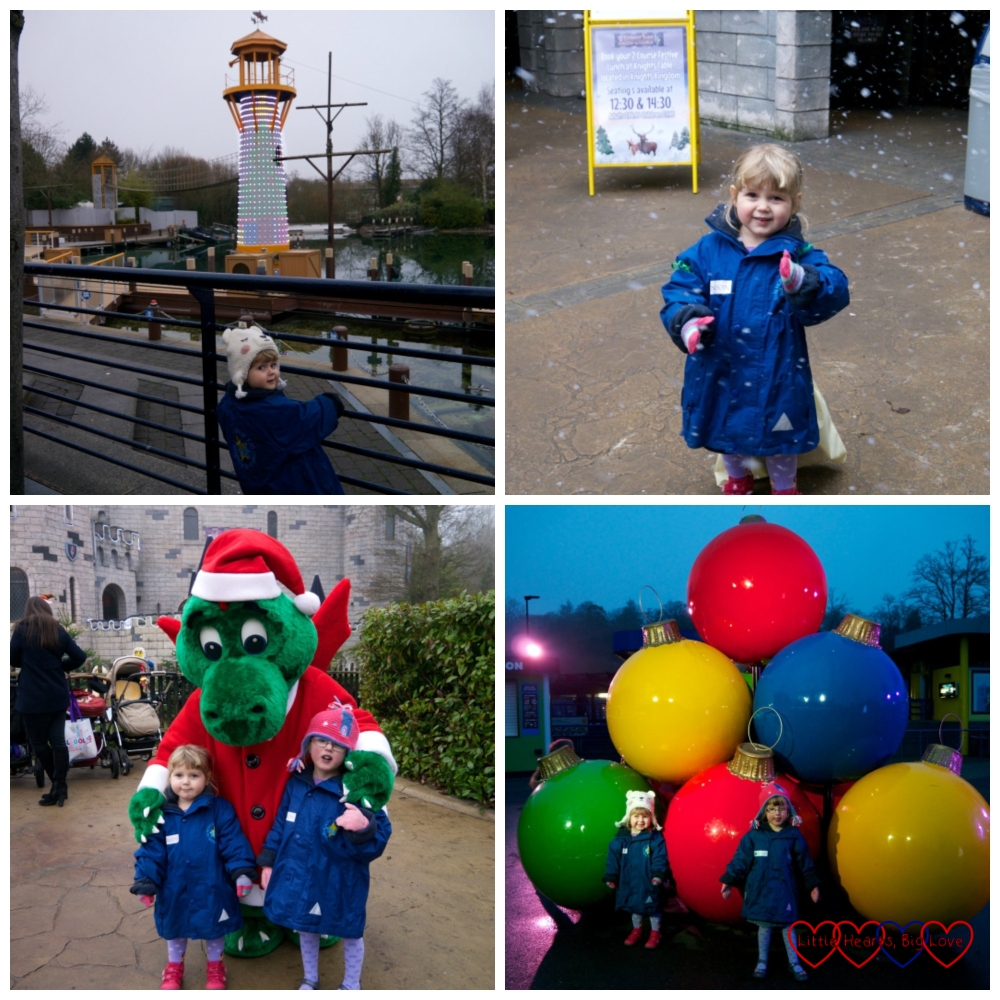 There was a giant Lego Christmas tree, Lego elves, a big Lego model of Father Christmas (which we could have a free photo taken with) and Ollie the dragon also made an appearance.  We had a fabulous festive day out. It was the perfect way to round-up a lovely year of memories at our “favourite Legoland ever.”

8 thoughts on “Christmas Bricktacular: 7 things we loved about our festive day out at Legoland”