We hadn’t told the girls that we were going to see Father Christmas at Legoland ahead of time. Jessica, I think, would have guessed as soon as she realised we were heading in that direction, had I not made it so clear that Legoland was closed over the winter. It wasn’t until we took the exit off the roundabout that led up the hill to Legoland itself that she finally twigged. Sophie had fallen asleep en route but the look on her face when she woke up and realised where we were was just a delight: 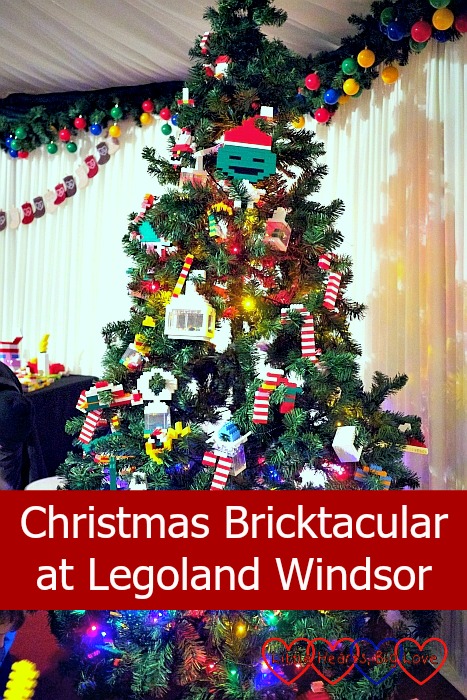 The entrance to the park was decked out in Christmas lights and the sweet shop had been transformed with miniature Christmas trees and toy soldiers to form the ticket station for the Brickmas Express. Our tickets were checked; we were given tickets for the children to see Father Christmas and for us to have a hot drink and then we were greeted by a jolly conductor as we boarded the train that would take us down the hill into Legoland. 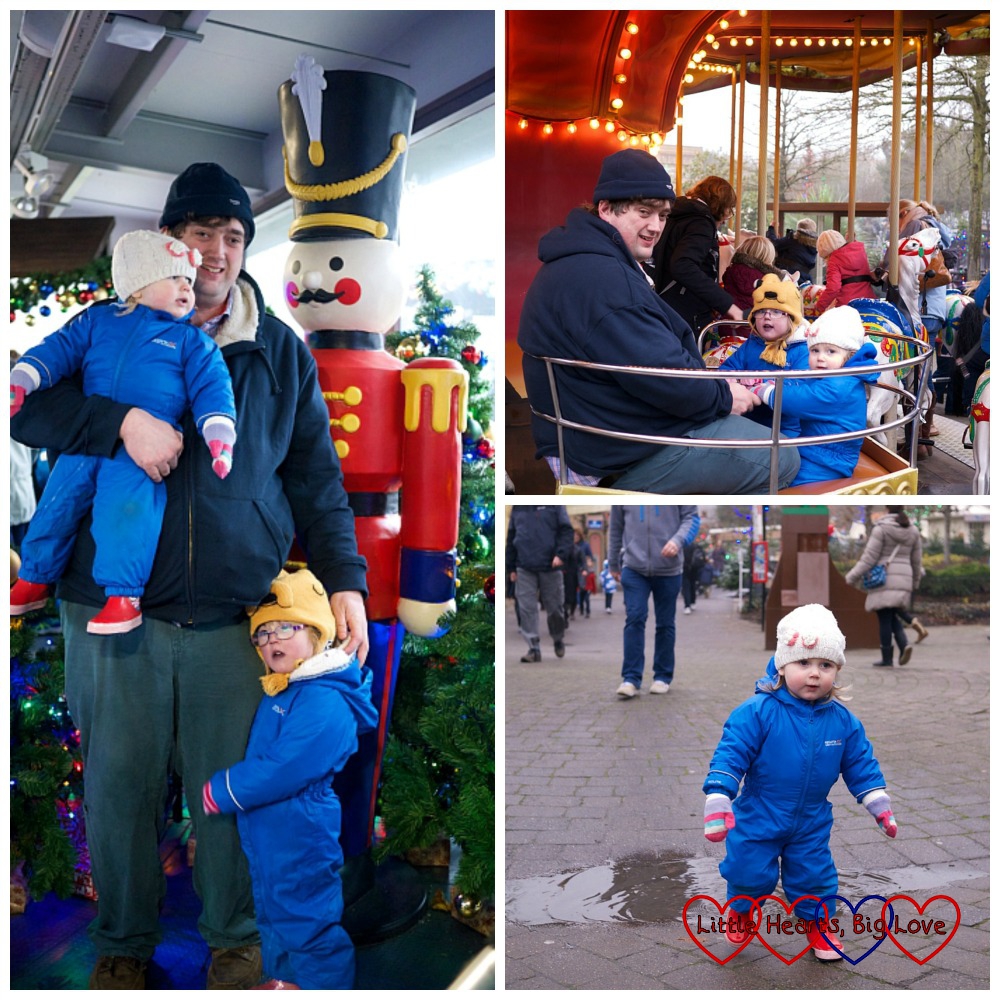 As regular readers of my blog will know, Legoland is one of our favourite places to visit, and we have made full use of our annual passes over the last couple of years. This was the first time we had been here for the Christmas special event though and I was looking forward to seeing how Legoland had been transformed. I wasn’t disappointed by the changes. There were lights and miniature Christmas trees, dusted with snow, everywhere. The only slight disappointment was that our favourite area, Miniland, wasn’t open but there were plenty of other rides and attractions to explore instead. 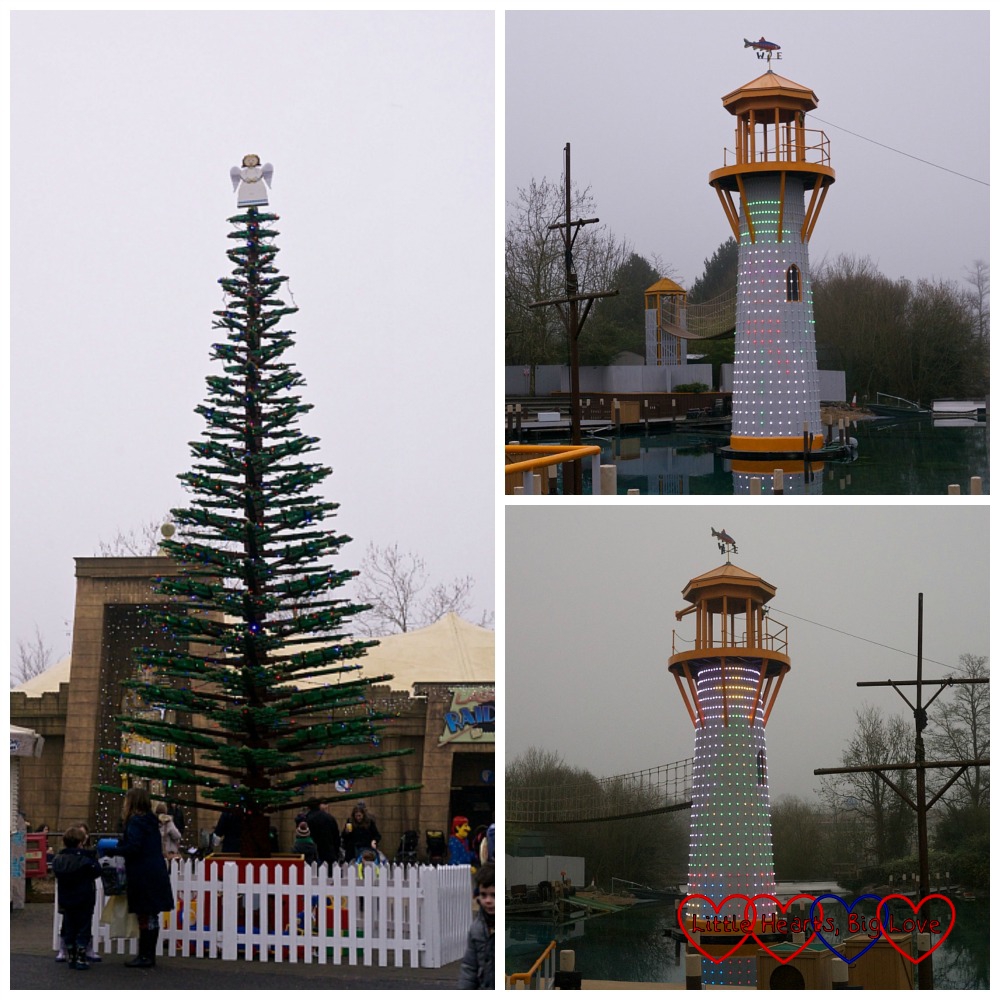 First stop was one of our favourites – Desert Chase. With hardly any queue, the girls made a beeline for the spinning cup, their favourite.  We loved the Christmas tree built from Lego which we saw nearby and the way the lights on the Heartlake City lighthouse made festive pictures.

We then headed over to Mrs Christmas’ Kitchen where we discovered Mrs Christmas fast asleep and running out of time to make biscuits for Father Christmas and the reindeer. Could we help her out by decorating a gingerbread snowman? Well, the girls were quite keen but trying to squeeze the icing out of the tubes was a little tricky for small hands and so a lot of help was needed from Mummy and Daddy. The tables were also a little bit too high and it was very uncomfortable kneeling on the floor with a small child propped on a knee, but the girls throroughly enjoyed it (especially eating the snowmen afterwards) and that was really all that mattered! 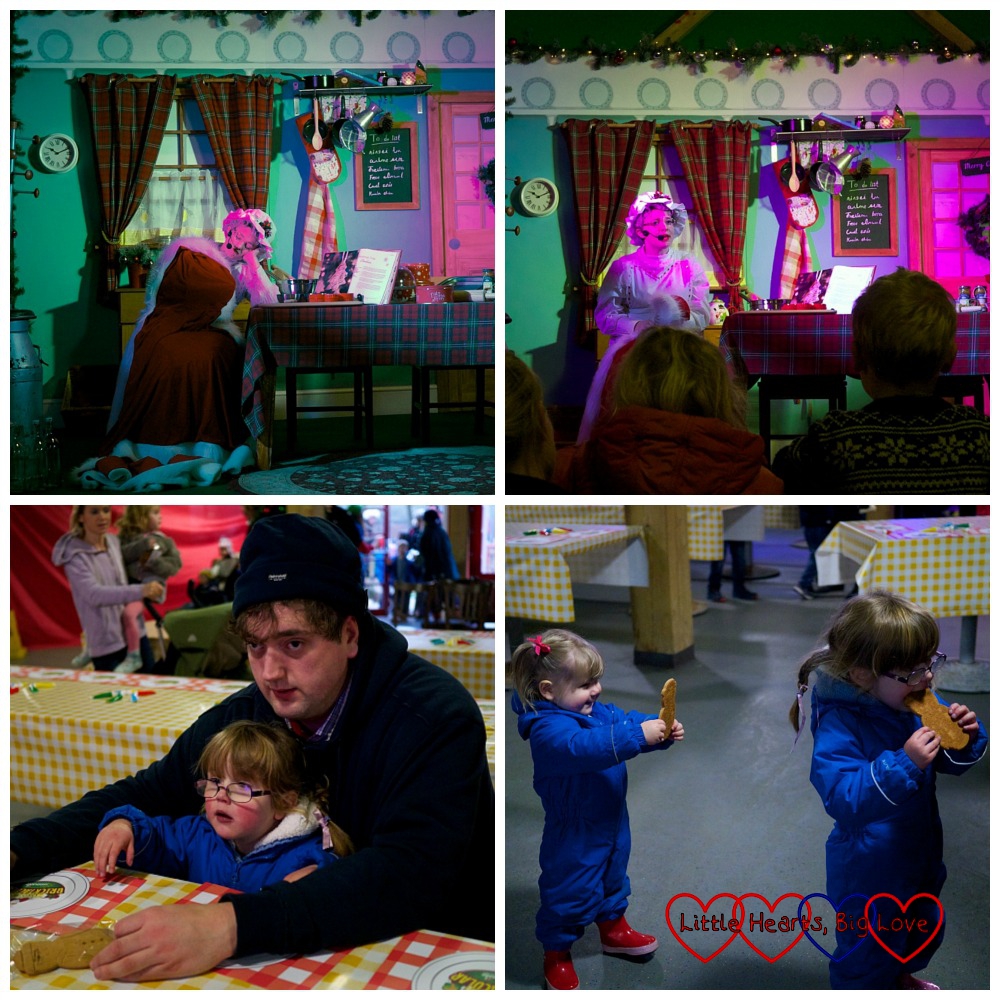 Jessica wanted to go and watch some Lego Friends videos in Olivia’s House next. She loves seeing “the fairies” and was slightly disappointed that there was no Lego Friends show on! Sophie loves Olivia’s House too as there are lots of giant Lego bricks to build houses for the Lego Friends’ pets and with Daddy helping (and having more fun than the girls), she managed to build quite an impressive house which she then tested out by going inside! In the meantime, I took advantage of Daddy being there to watch the girls and finally got to try out the Mia’s Riding Adventure ride which was a lot of fun (and best of all, there was hardly any queue!) 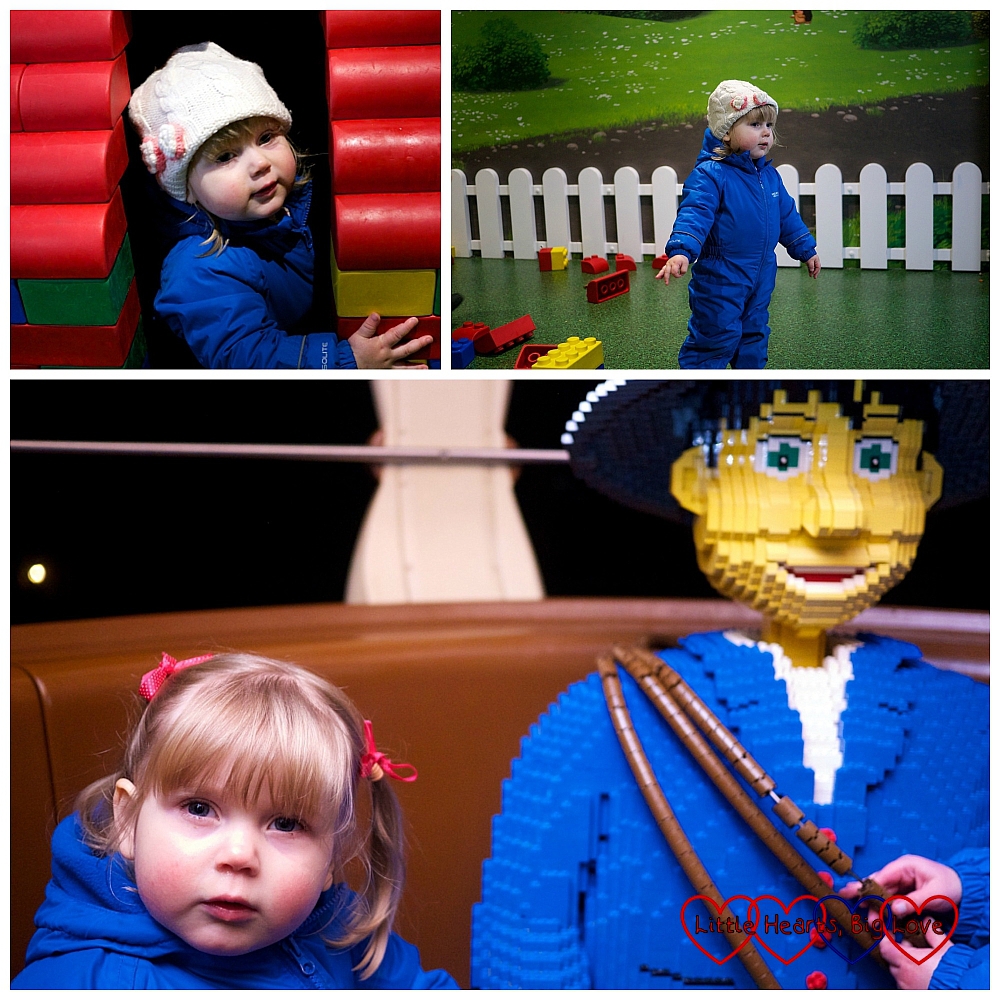 It was getting dark by this point and our slot to see Father Christmas was coming up so we headed over to the Christmas Kingdom. We stopped off at the Elves’ Workshop on the way where the girls had the opportunity to colour in a Christmas card, write a letter to Father Christmas or make a Lego ornament for the tree, but it was fairly busy and they weren’t too keen. 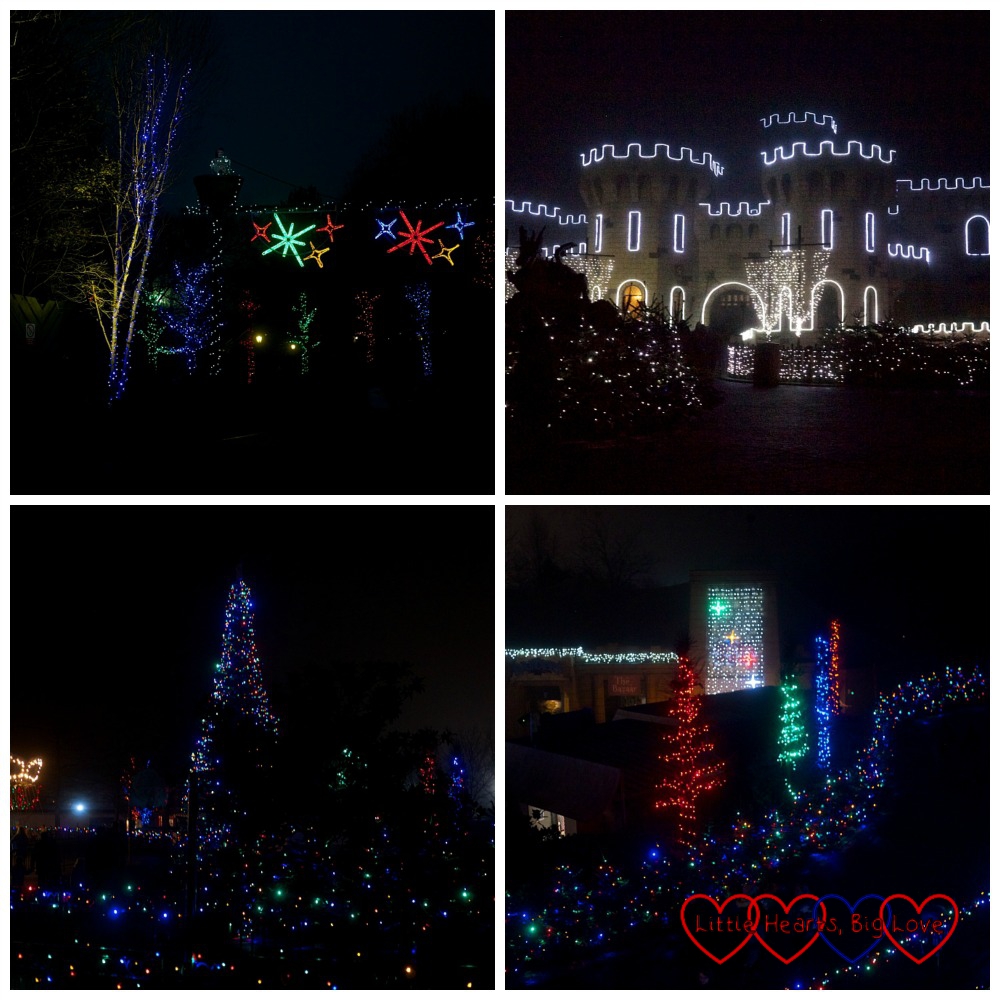 The Christmas Kingdom looked magical – the castle was all lit up and the route that led to Father Christmas’s cabin was lined with Christmas trees. We didn’t have to queue for too long, thankfully, although Sophie did get a little bit upset as we got towards the front of the queue but the Head Elf was there to give her a cuddle, pose for an “elfie” and cheer her up again. We were then met by elf Tootsie who led us through the maze of Christmas trees (very cleverly done) to Father Christmas’s cabin where we were greeted by another elf who asked the girls their names and ages and then popped in to see if Father Christmas had finished his mince pie before letting us in. 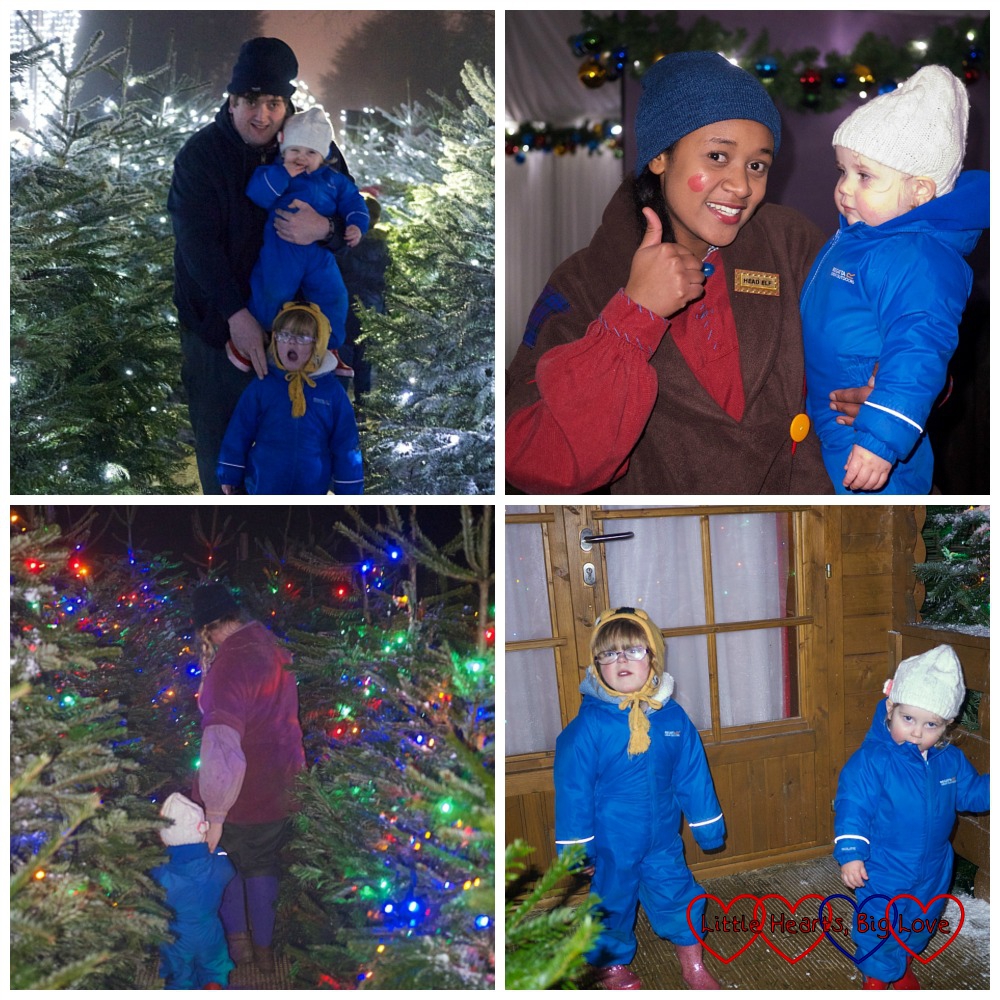 The girls’ faces just lit up when they saw Father Christmas sitting there in his armchair by the fire, all jolly and friendly – calling them by name and remarking on how much they’d grown since he’d seen them both last year. Sophie rushed straight over for a cuddle whereas Jessica was a little more reticent. When asked by Father Christmas what she wanted, she just said “a present, please!” which made life very easy!   The presents were great – a Duplo starter kit for Sophie and a Lego Friends kit for Jessica and the girls were both thrilled with them. The elf was happy to take a photo with my camera as well as the official one. I was quite pleased that the photo taken with my camera was the better one of the two – it saved me from spending £10 to buy the official one! 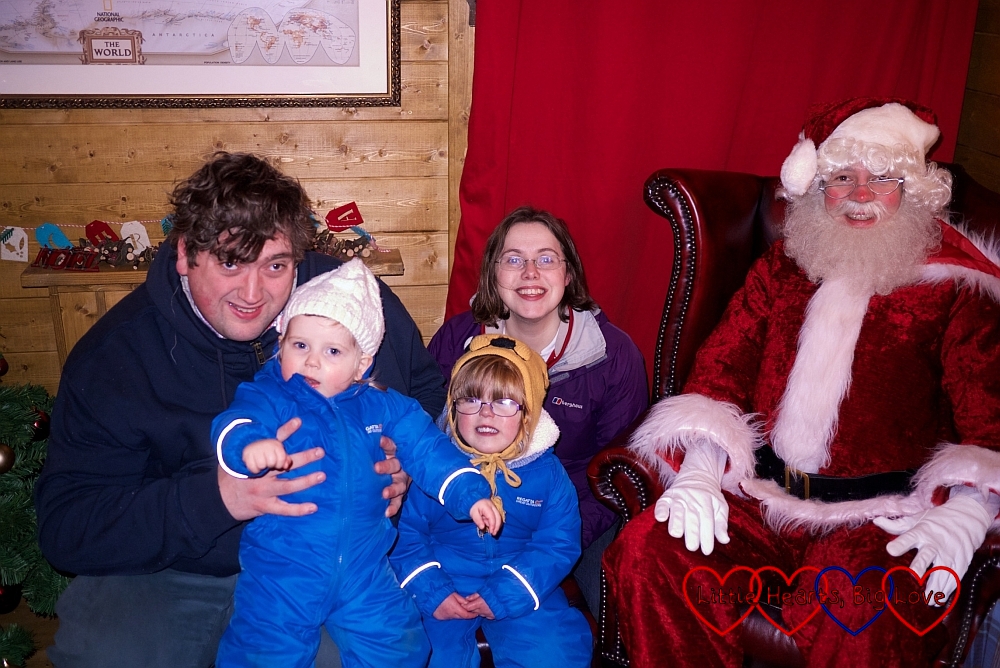 We finished off our day with a ride on Aero Nomad, where we got to see all the beautiful lights from up high and another ride on Desert Chase. As there was no queue at all for Laser Raiders, we gave this a try too. We’ve been on it once before, over a year ago and Jessica found it scary. I thought it was worth trying again to see if being a year older had made her less fearful but she still didn’t like it.

Overall, we had a wonderful day. The park looked amazing with all the Christmas lights and the elves were all so friendly and helpful. Hubby and I were so impressed by Father Christmas and the whole set-up to meet him – the maze of trees was such a clever touch and they were so dense that I couldn’t see any cabins other than the one we visited (although hubby being quite a lot taller did spot a few others!).

The ticket prices were £15 each with the annual pass (£25 without). Last year, we had found the ticket prices a little too much especially as the girls were so young, but we decided to treat them this year. I have to say it was well worth the money – even with half the park closed, there were still plenty of rides to enjoy (with hardly any queues) and seeing Father Christmas was truly magical. The hot drinks included in the adult ticket were quite nice (I had mulled wine and hubby had spiced apple) and we both enjoyed the biscuits that went with them (even if we had to share most of them with the girls!). It was a wonderful day out and such a lovely way to get in the Christmas mood.