Sometimes when I watch Jessica and Sophie playing, I realise just how much things have changed since I was a little girl.  Jessica is already able to use a iPod, turn the TV on and off and change channels and operate the DVD player.  When I was her age, I could probably operate the TV but that was because the buttons were on the front!  We didn’t have iPods or mobile phones. If we were out playing then Mum had to go and find us or wait for us to come home!  Now my sister phones my nieces to tell them it’s dinner time.

I thought it would be interesting to compare some points about childhood for my mum, myself and for Jessica. 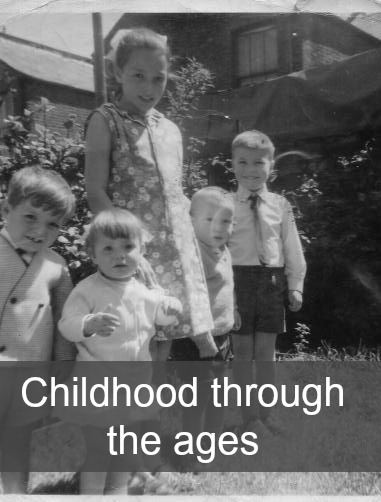 Being in an air-raid shelter in the garden with the gas masks and sitting on a bunk bed.

My brothers had toy guns, whereas we girls had china tea-sets, a dolls’ house, cardboard dress up dolls and also tiny rubber dolls that we used to make clothes for.

Snakes and ladders, ludo and tiddlywinks,football games with buttons on the table and card games like Old Maid.

No TV, but there were some children’s programmes on the radio – I used to love Dick Barton Special Agent.

There was a grass area at the bottom of the road with a tree where we used to play. We also used to play marbles and rounders in the street. Back in those days you could play in the roads safely as there were hardly any cars.  We did a lot of walking and would go out to the woods and pick handfuls of bluebells or try to catch tadpoles with a net in the stream. On Sundays we would go out with our parents in the afternoon after Sunday school and there would be a band playing in the bandstand at the park.

We occasionally went to the seaside, or to the circus if it was in town.  My parents also took us to the zoo or we would have a day out at a fair.

I remember having toffee that you used to break with a little hammer, barley sugars, jelly babies and lollipops.

The Beano and the Dandy plus the Rupert Bear annuals.

I shared a bedroom with my three sisters – we shared a double bed and slept top and tail. 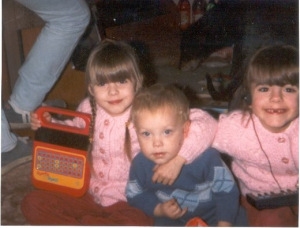 I can remember standing by the orange toilet in the pub where we lived and playing with a ball which had knobbly bits sticking out of it.

We had lots of toys: dolls, Barbies, Sylvanian Families, Baby Talk, Teddy Ruxpin were the ones I can particularly remember. My favourite toy was a rag doll called Susie.

Lots of classics like snakes and ladders and ludo but we also loved Kerplunk, Ghost Castle and Hungry Hippos.

There were a  couple of hours of children’s TV on each day in the afternoons or at lunchtime. Favourite programmes were Bagpuss, Rainbow, Super Ted, Knightmare, Fraggle Rock and Teddy Ruxpin.

We played tennis in front of the garages and kerbsies in a quiet side road. The park was great fun – there was a big climbing frame that we loved to climb (I can still remember the sense of achievement when I managed to get to the top!) and a big slide.  It was all concrete back then – I can remember the council changing it all and making it much safer when I was about ten or so but when I was little it must have been quite dangerous. We also went wandering around the fields locally collecting frogspawn and swinging on tyre swings across the stream.

In the summer holidays, Mum and Dad would take us to Thorpe Park, Chessington, Marwell Zoo and the beach where we would play on the 2p machines or go to the funfair.

Penny sweets were the best – and I can just about remember halfpenny sweets too when I was really little!

Twinkle and Care Bear comics were my favourites as a little girl and then later on The Beano and The Dandy.

My twin sister and I shared a room and had bunk beds. One of my older sisters shared a room with us for a while before she moved out. 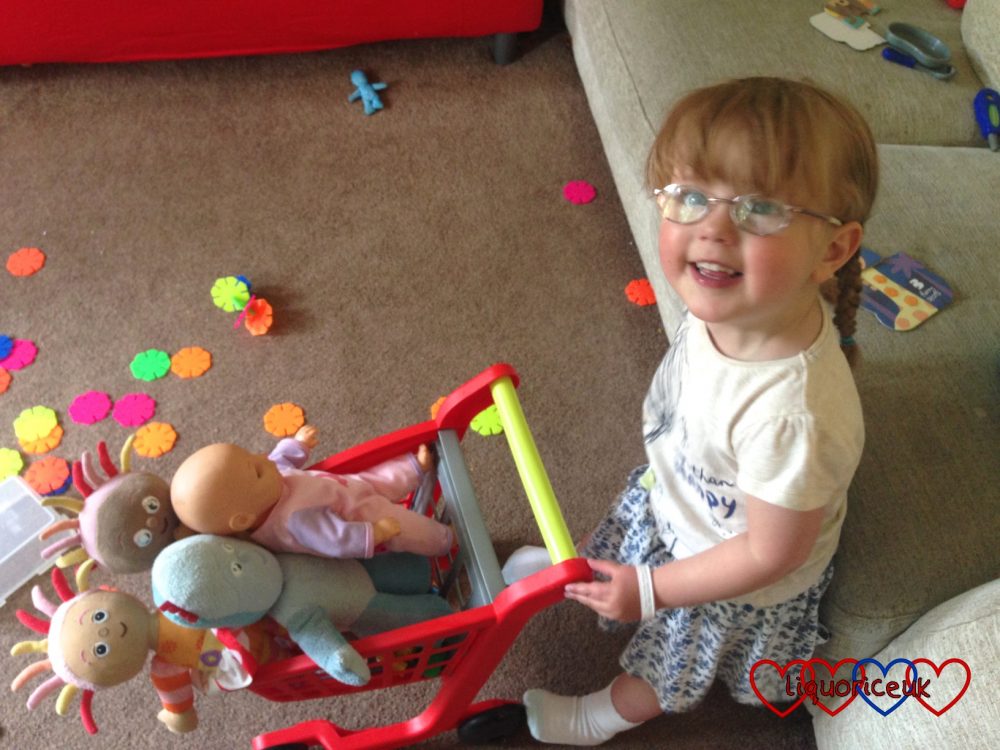 Hopefully will be a good one!

Duplo, pram, baby dolls, Playmobil zoo and In the Night Garden figures are all favourites.

Jessica is a little young for board games just yet but she loves jigsaws.

CBeebies is available from 6am to 7pm but I think some of the other kids TV channels might be available 24/7.  I like the fact that CBeebies goes to bed! Jessica also loves using iPod to play games on.

We have a play house in the garden (similar to the one I had as a little girl) and Jessica loves her trike and going to the park.  Everything is much safer in the park than it was when I was Jessica’s age – less danger of her falling and hurting herself.  It was quite a shock when we took her to a play area in France and she wanted to go on the slide which was about 5ft high with open sides at the top and gravel all around it!

Jessica doesn’t eat many sweets yet (has yet to discover most of the sweets that are out there!) but she does love chocolate buttons!

So many to choose from!  Jessica loves the CBeebies comics, especially the In the Night Garden one and also likes Peppa Pig.

At the moment Jessica has her own room but she will be sharing with Sophie once Sophie moves out of our room.

Linking in with Sara at mumturnedmom for this week’s Prompt: “The highlight of my childhood was making my brother laugh so hard that food came out of his nose.” (Garrison Keillor)

10 thoughts on “Childhood through the ages”