The last few months have been a struggle for me on the mood front. With hubby being away so much over the last few weeks, everything came to a head. I was feeling exhausted, tearful, overwhelmed and isolated. I finally realised that I needed to seek help from my GP, who diagnosed me with postnatal depression. She felt that I would benefit from being on anti-depressants. However, she told me that I would have to stop breastfeeding as the medication would pass into my breast milk.

To be honest, I have been hoping to avoid mediation and would prefer to go down the talking therapies route. Those low feelings had been so overwhelming though, that I wondered whether anti-depressants would help take the edge off and give other therapies a better chance of success. Breastfeeding is something I feel so passionate about. I couldn’t bear the thought of having to stop before Sophie or I were ready to. Did I really have to give up breastfeeding?

I posed the question on Twitter using the #PNDFamily hashtag, I soon got a very clear answer. My GP was misinformed. Being on medication would not necessarily mean having to stop breastfeeding. 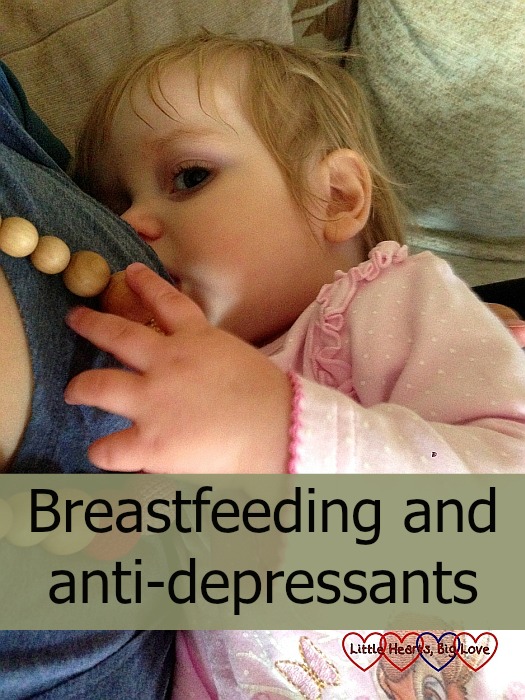 One of the pieces of information I was directed to was a Breastfeeding Network leaflet. I have printed this off to pass on to my GP.   This leaflet lists various tri-cyclic anti-depressants and selective serotonin re-uptake inhibitors (SSRIs). It summarises some of the research on side effects in babies of nursing mothers and the amounts of anti-depressants found to be present in breast milk where this has been studied. It was clear from this leaflet that there were several options of medication potentially available. One of this is sertraline. The leaflet states that this is normally “the SSRI of choice for a breastfeeding mother”.

Since that initial appointment with my GP, I’ve now got extra support from my lovely health visitor in place. I will also be starting cognitive behaviour therapy (CBT). I feel a lot better for having admitted to struggling and am trying to focus on the positives. I’d rather not have meds unless I really feel I need them. However it’s reassuring to know I don’t have to give up breastfeeding should I need to go down the medication route.

12 thoughts on “Breastfeeding and anti-depressants”