Having completed the City trail and almost completed the Greenwich trail – it was time to set off on the Riverside Trail and find the book benches situated along the banks of the River Thames. 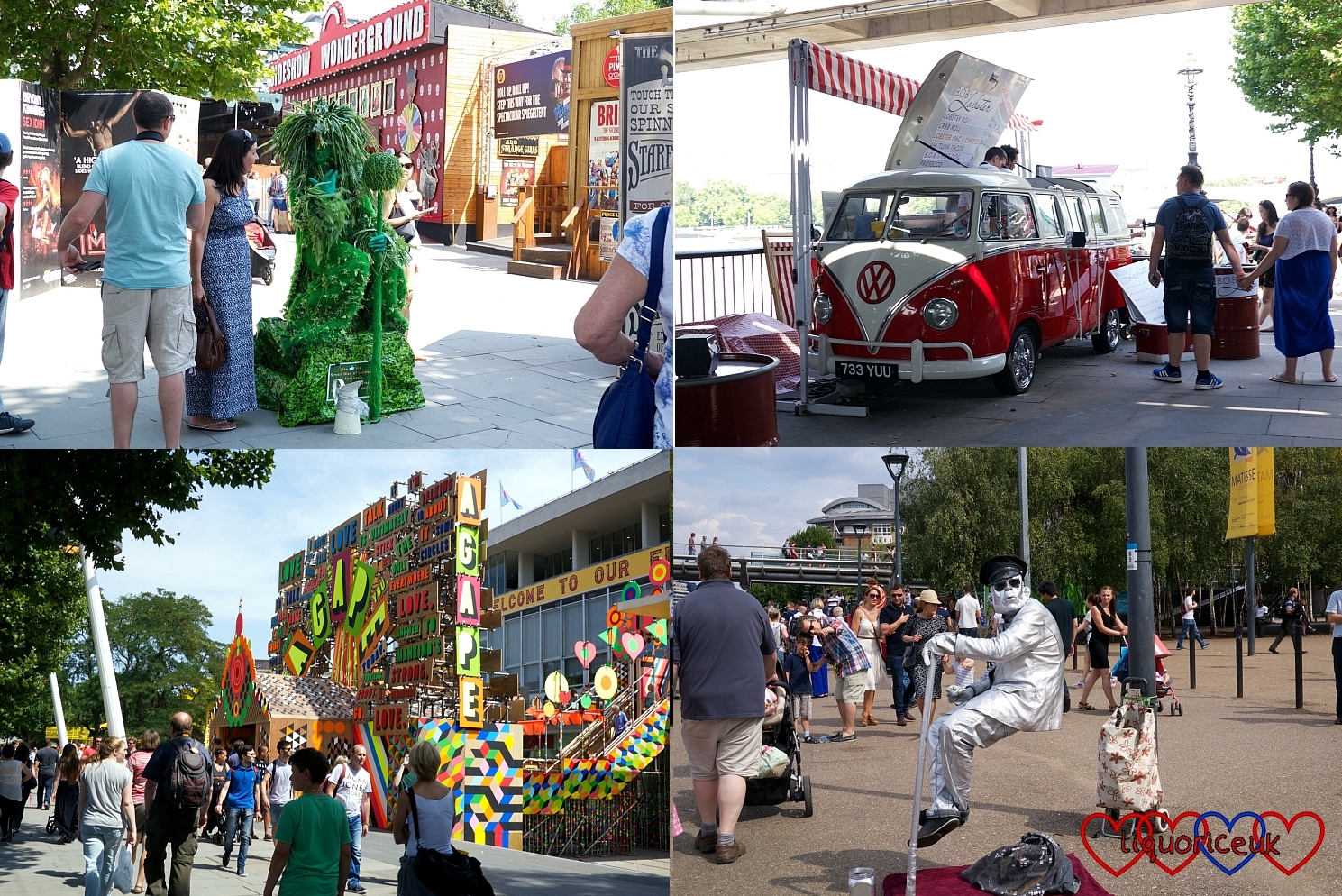 We started off at Southbank just near the London Eye as I’d thought there was a bench near Waterloo but when I consulted the printed out map from the Books About Town website, it seemed the first bench on our hunt was much further down the river than we’d anticipated. With the Festival of Love going on at the Southbank Centre, it still made for a very interesting walk along the river before we found our first book bench, the Shakespeare one, just outside the Globe theatre. 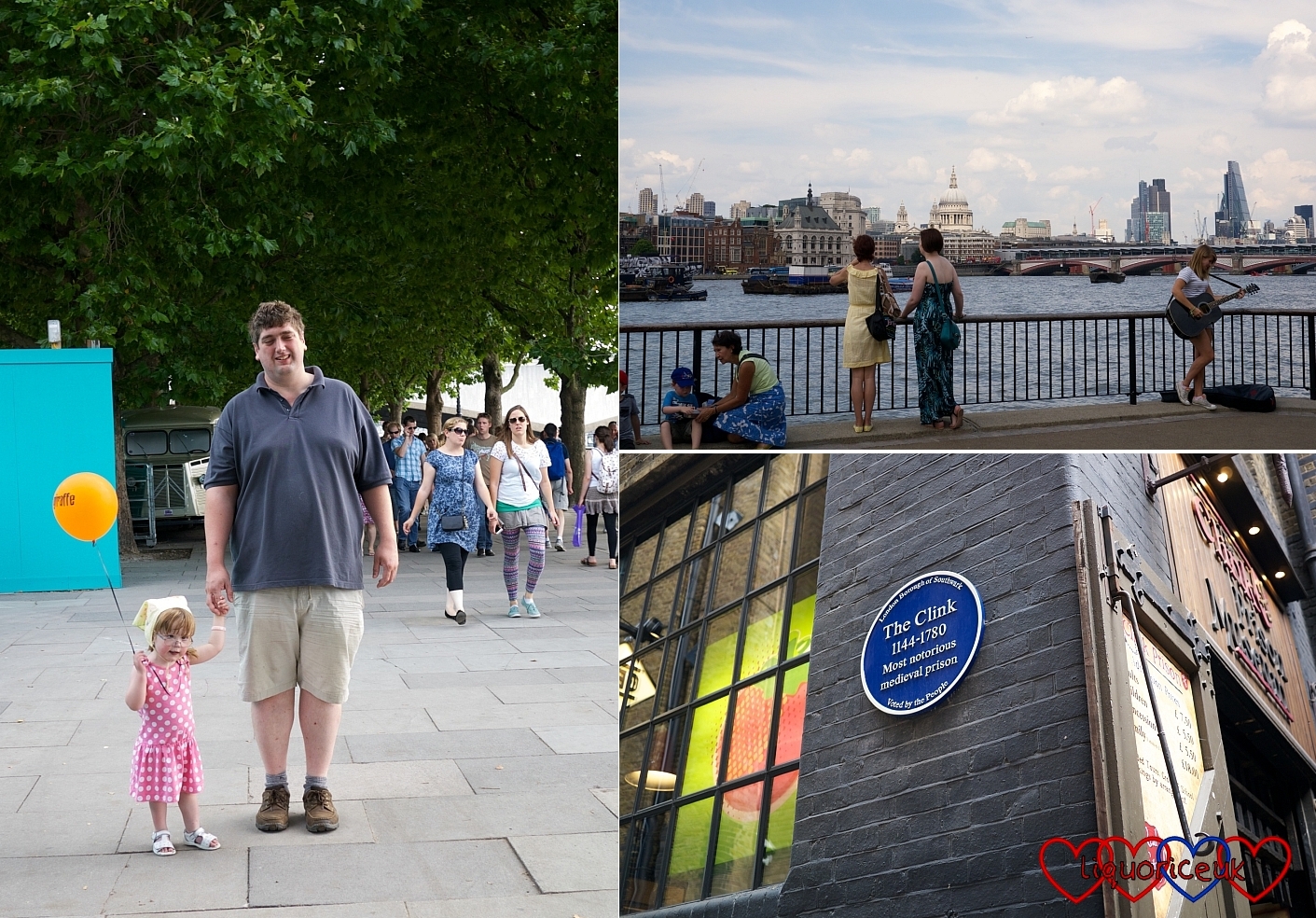 Continuing along the river, we passed the Golden Hinde II, a reconstruction of Sir Francis Drake’s ship in which he travelled around the world, and the site of The Clink prison (where there is now a museum). 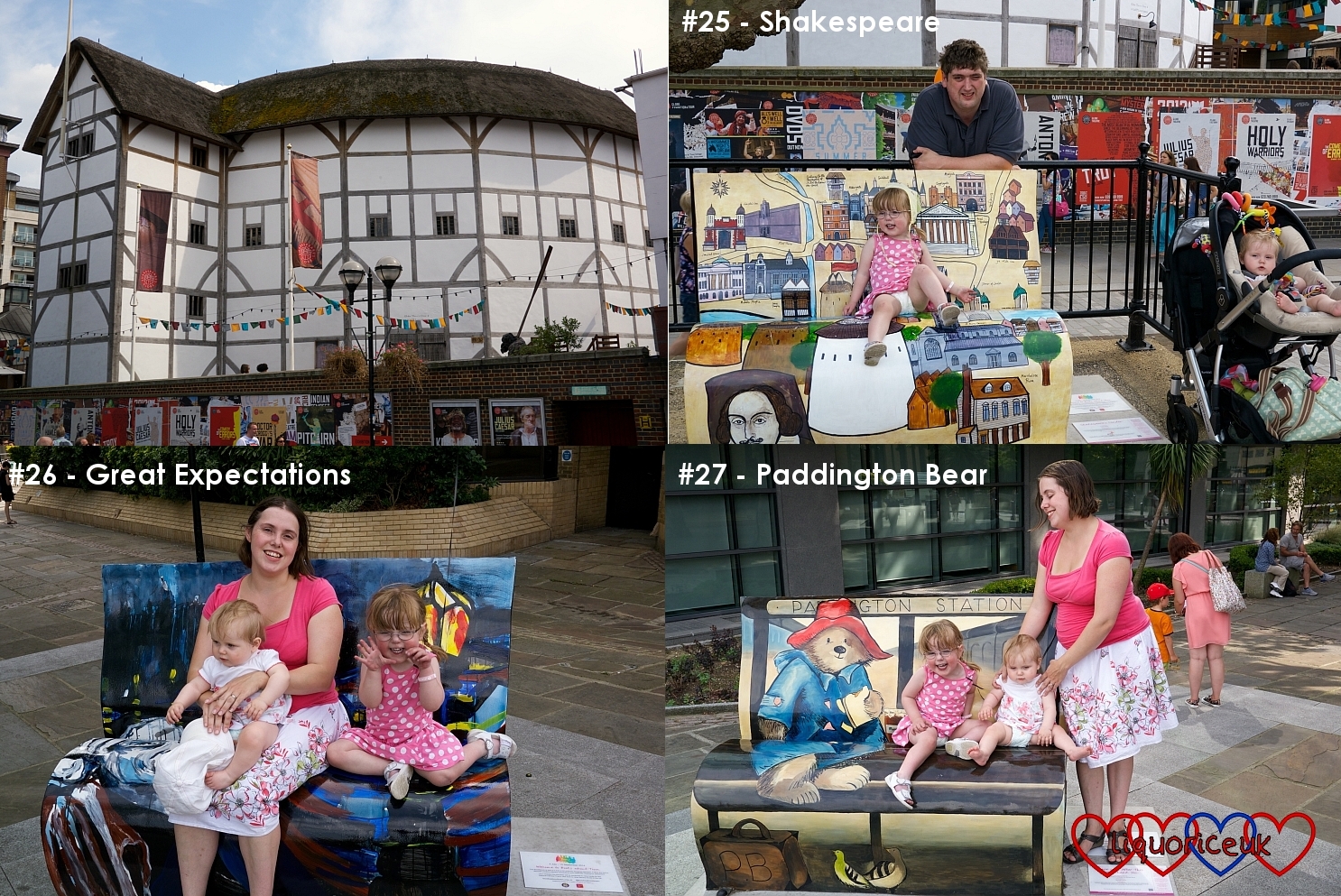 Our next two benches, Great Expectations and Paddington Bear, were found very close together, near to Southwark Cathedral. We had to wait a little while to be able to take our photos as both benches were occupied by people relaxing and eating lunch. This was something that became a bit of a feature on this trail – the benches actually being mostly used as places to sit rather than as artworks to discover on a trail. We only came across a few other people who were trying to take photos of the benches rather than just wanting to sit down! I have to confess it got a bit frustrating at times, especially in areas where there were plenty of other seating options available! 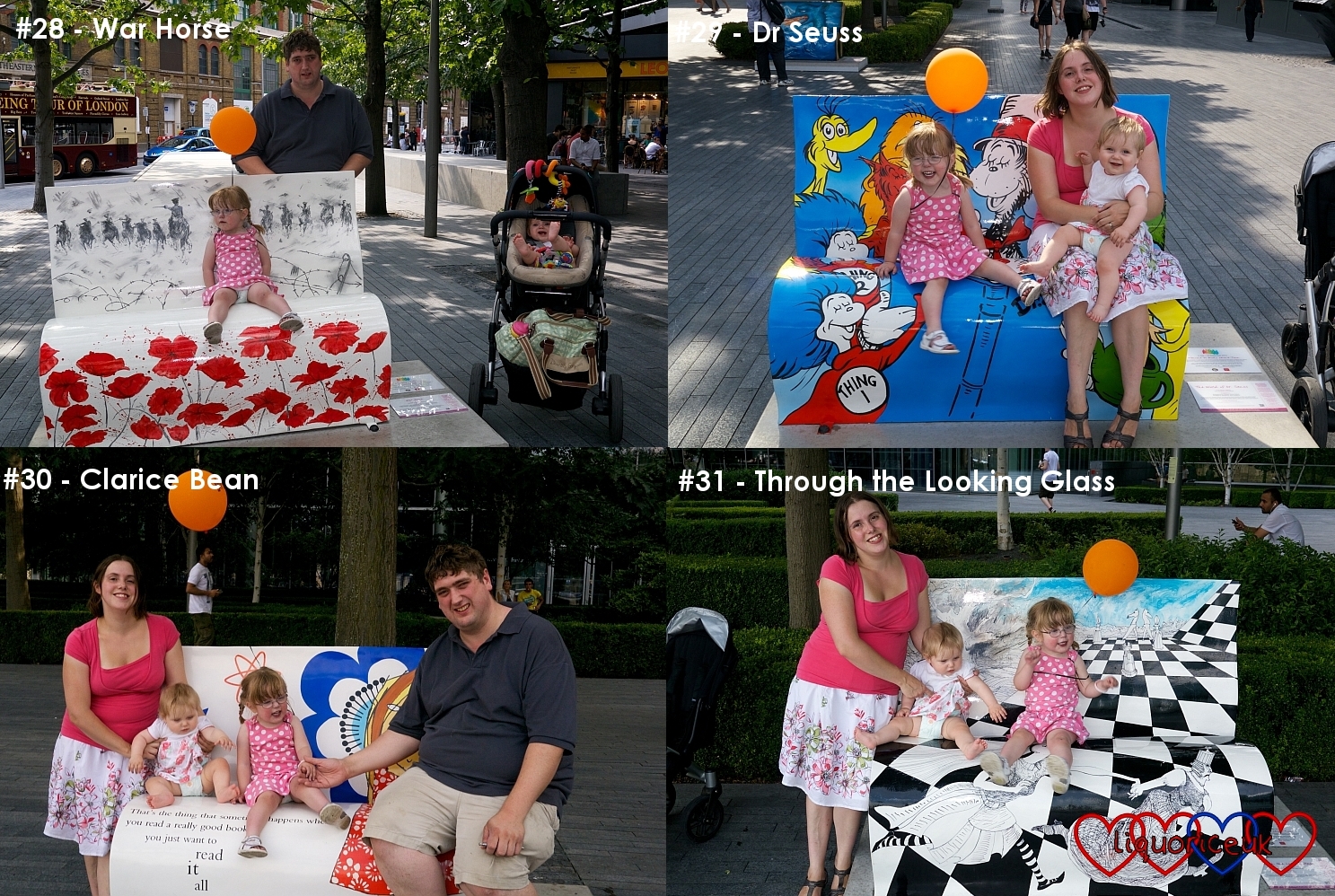 On past London Bridge and to our next bench, War Horse. This was one of my favourites on the trail so far and the vivid red poppies against the black and white imagery of barbed wire and horses in battle was very striking and particularly moving with the centenary of the start of World War I being earlier this week.   The next five benches were very close together near Tower Bridge – the lovely bright and colourful Dr Seuss bench; Clarice Bean (which Jessica got very excited about – “Lola!” she kept saying, being more familiar with “Charlie and Lola” by the same author, Lauren Child); Through the Looking Glass; How to Train Your Dragon; and Discworld. 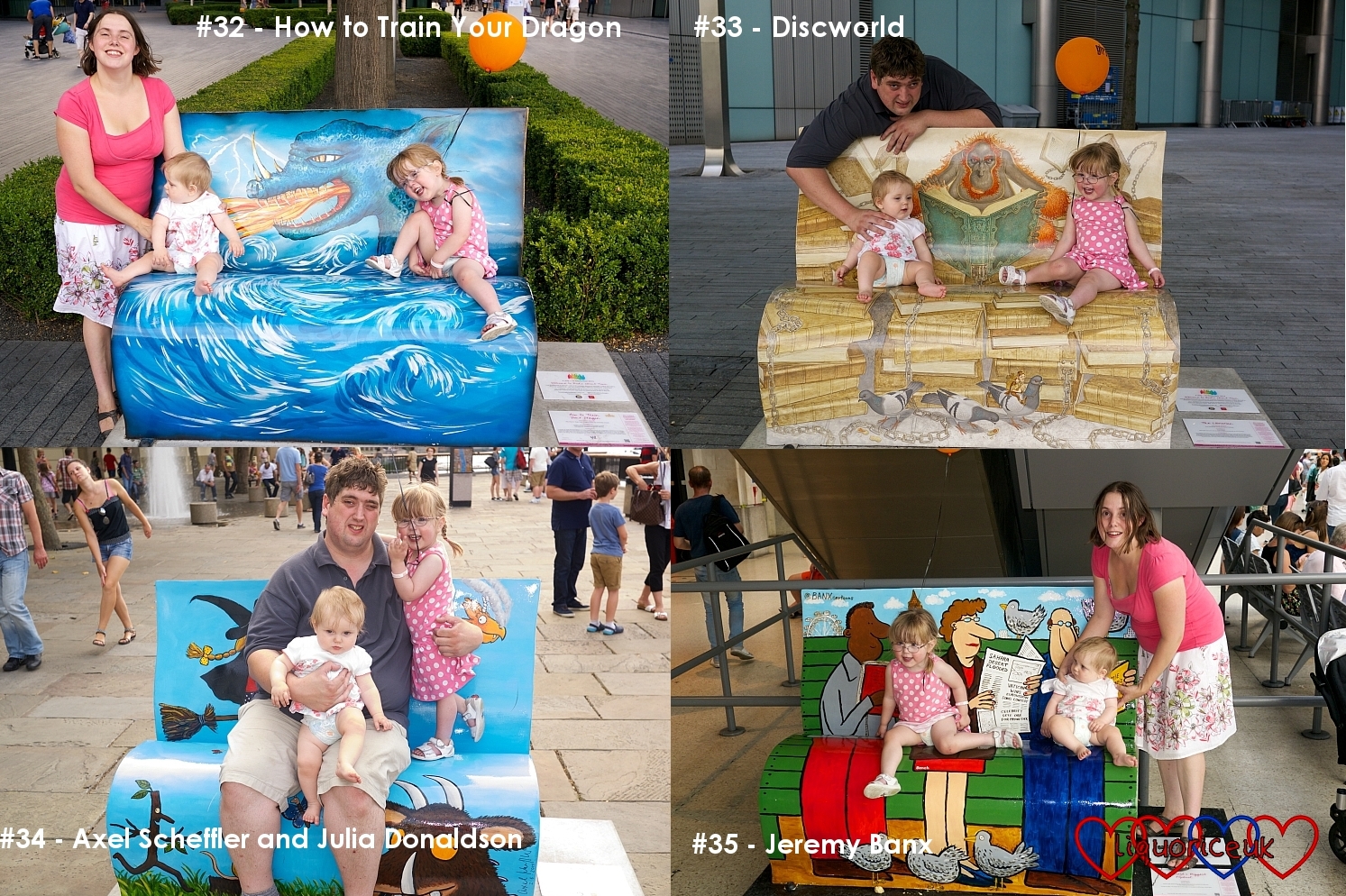 Our final bench in this area was the Axel Scheffler and Julia Donaldson bench near the London Bridge pier with its familiar images of the Gruffalo and the witch from Room on the Broom – characters that Jessica recognised from her bedtime stories. We took the river boat back to the London Eye, having realised that there was an extra bench on this trail not marked on the map downloaded from the website – the Jeremy Banx bench situated in Waterloo station which hubby noticed whilst checking the map on his phone. I knew there was a reason we had tried to park around that area! One last bench found before heading back to the car with two tired little girls who seemed to have both enjoyed their day out. 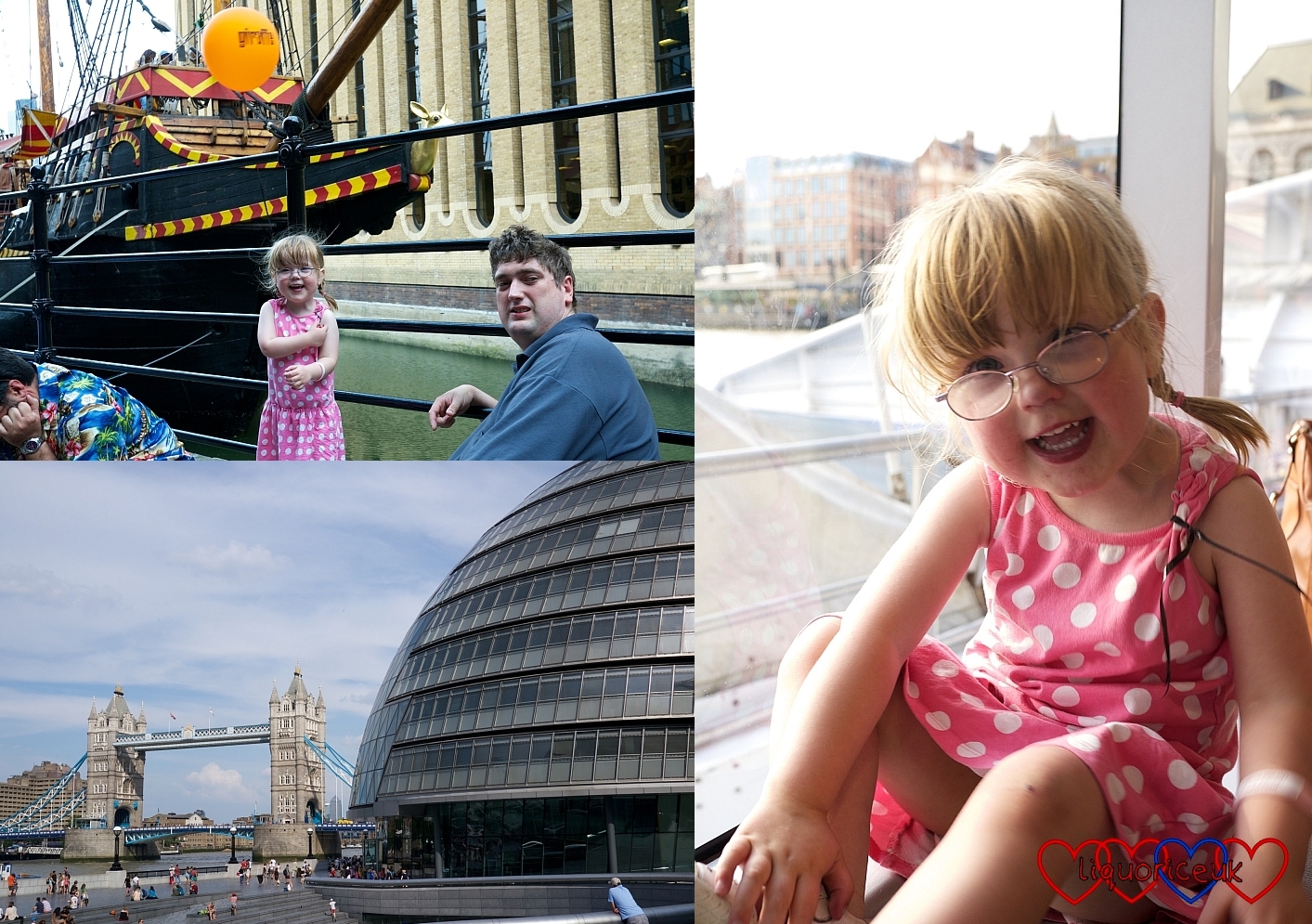 This trail takes the total number of book benches visited so far to 35 – just 15 left to go plus there is a 51st bench due to be unveiled somewhere in London at the end of August which we’ll hopefully manage to visit too.