One of the nice things about meeting up ‘somewhere in the middle’ with friends who live some way away is the opportunity to visit new places that we wouldn’t normally visit. We recently enjoyed a day out with a friend at Bocketts Farm Park, near Leatherhead. Given how much Sophie loved our stay at Coombe Mill, I knew it would be somewhere she would enjoy. 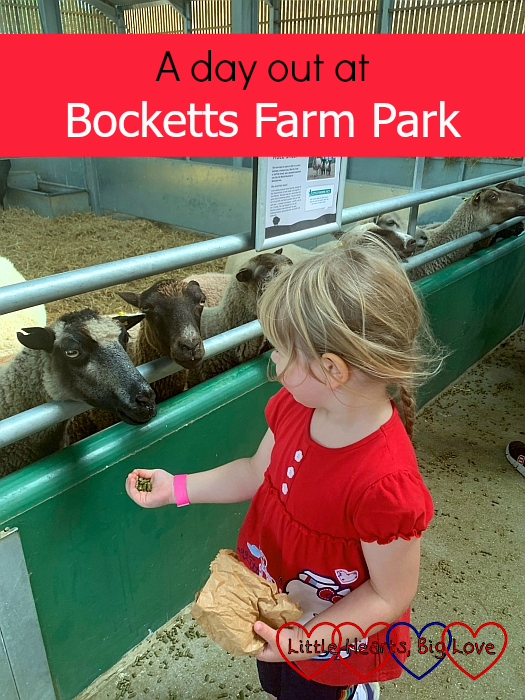 It took us a little longer to get there than I’d anticipated due to roadworks causing some very long traffic jams. We were late – but my friend was also stuck in the traffic and running even later than we were. While we waited for her to arrive, Sophie had to decide which team she was going to be on for the magical adventure trail. There were two sets of wings on the wall – dragon wings for Team Dragon and fairy wings for Team Fairy – plus a guide to choosing your magical fairy or dragon name.  Sophie decided that she was going to be on Team Fairy. Her magical fairy name (based on her initial and birth month) was Peaches Twilight. Jessica’s would have been Cherry Sunbeam. We decided that Thomas was on Team Dragon and his magical name was Glowing Fire Dragon. 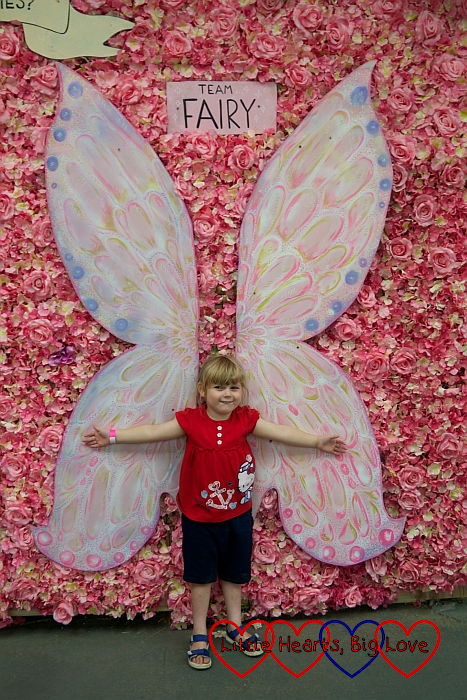 There were five different areas to find across the park, each with a stamp to collect. We found the unicorn area just inside the entrance, near the play barn. Sophie loved posing for a photo with Sparkles the unicorn. I could just imagine Jessica’s squeals of delight had she been with us still. She loved unicorns too. 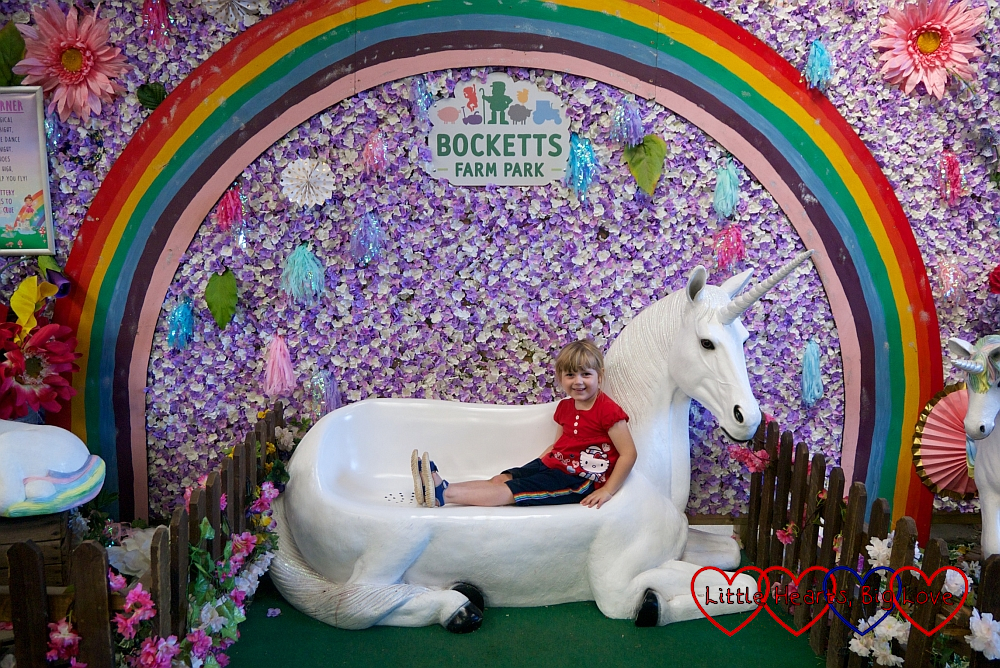 With the first stamp on the trail sheet, Sophie turned her attention to the mini tractors. She had great fun riding one around the tractor garage track until my friend arrived. Thomas had a little go on one of the ride-on bikes, although he was a little bit too small for it. 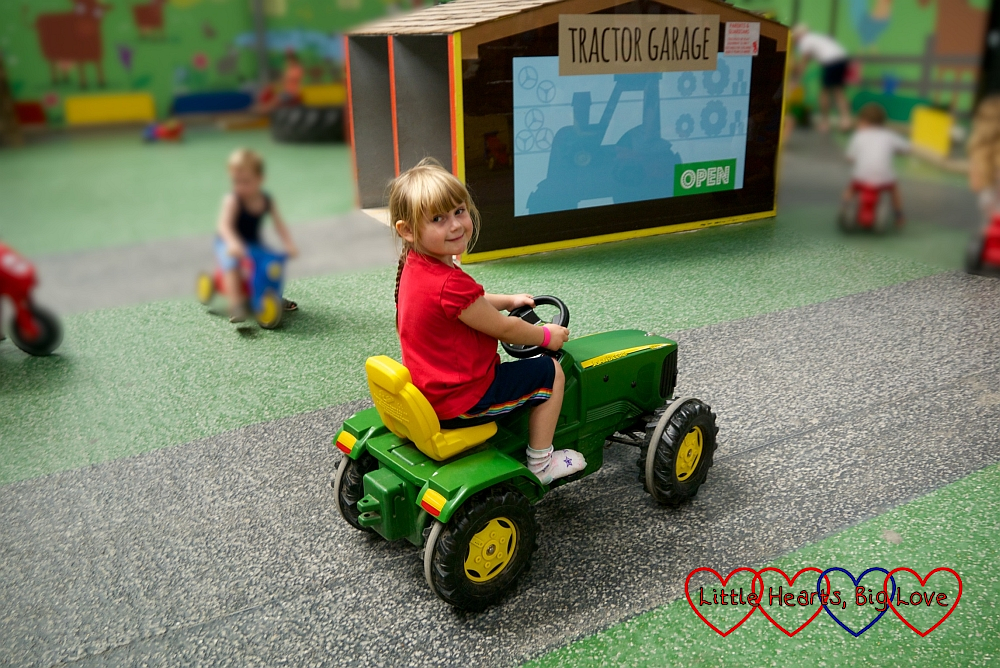 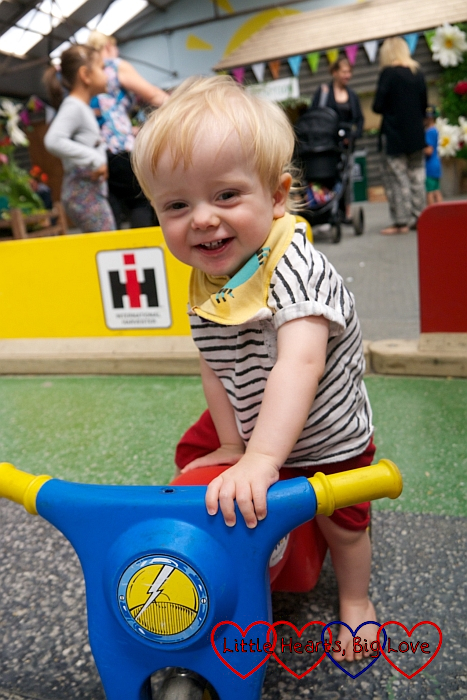 Sophie was keen to head to the play barn before feeding the animals. This was a good opportunity for me and my friend to catch up while the children played. It was Thomas’s first time exploring soft play. He loved pulling himself up to stand and cruising around the toddler area while Sophie had fun climbing around the older children’s area and sliding down the big slide. 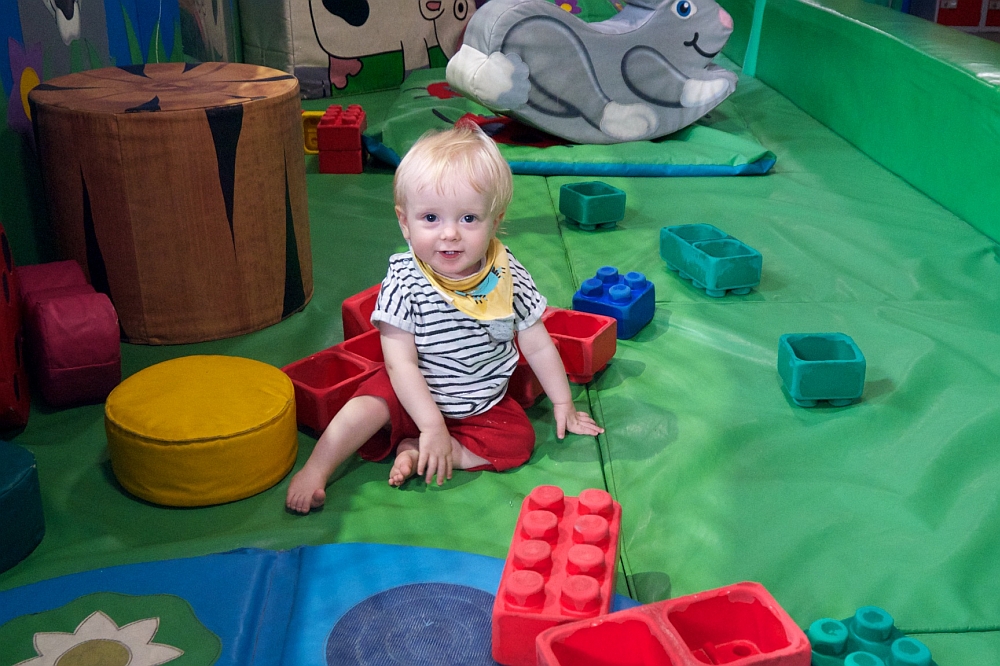 We’d bought a bag of animal food at the entrance for £1. We weren’t allowed to feed the pigs, horses or donkeys, but otherwise Sophie was able to feed whichever animals she wanted with it. We started off with the goats just outside the play barn before heading towards the Animal Discovery Barn where there were lots of different animals to see. 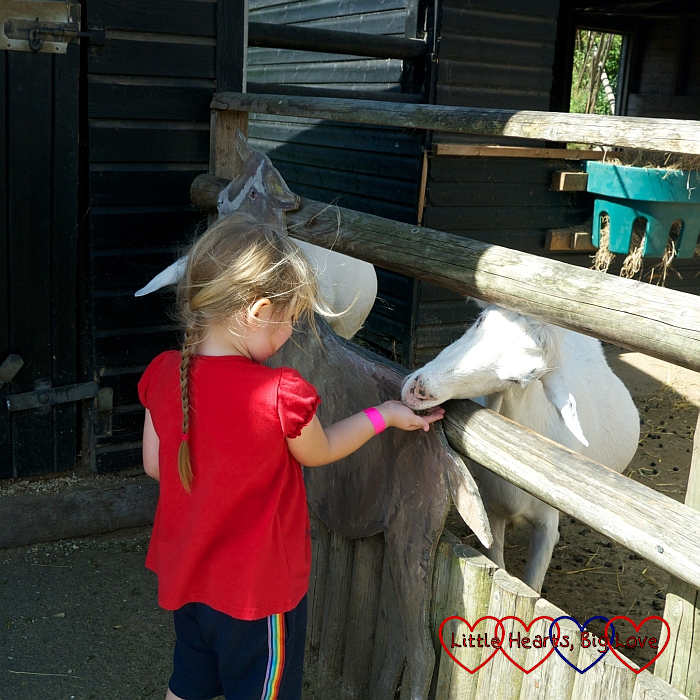 Thomas was absolutely fascinated by all the animals, reaching out to stroke the sheep when my friend lifted him out of the buggy to get a closer look. It was lovely to see some baby animals in the barn too. My favourites were the piglets. 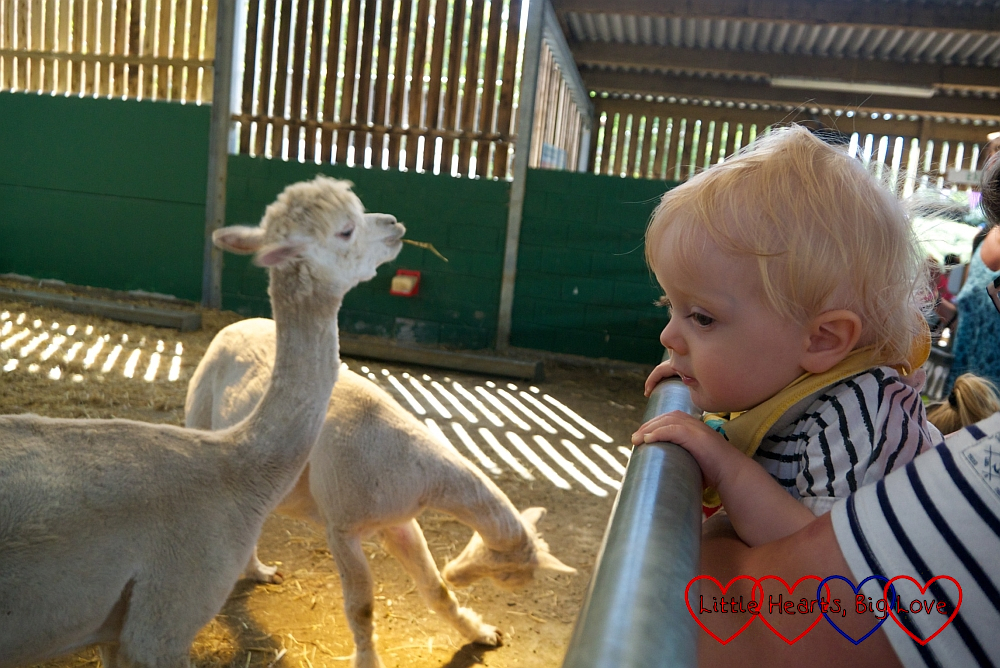 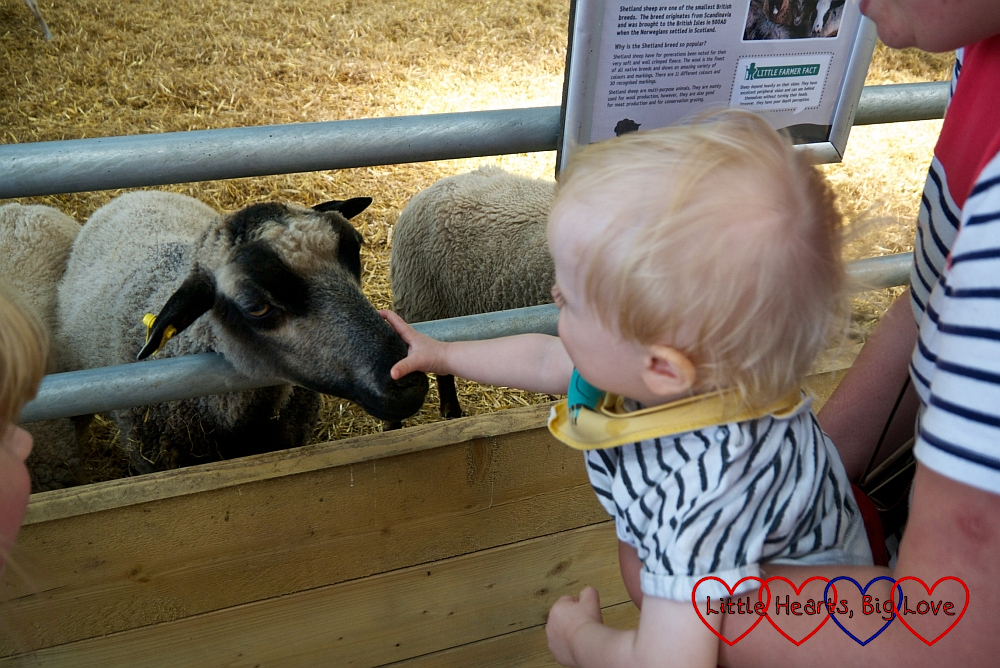 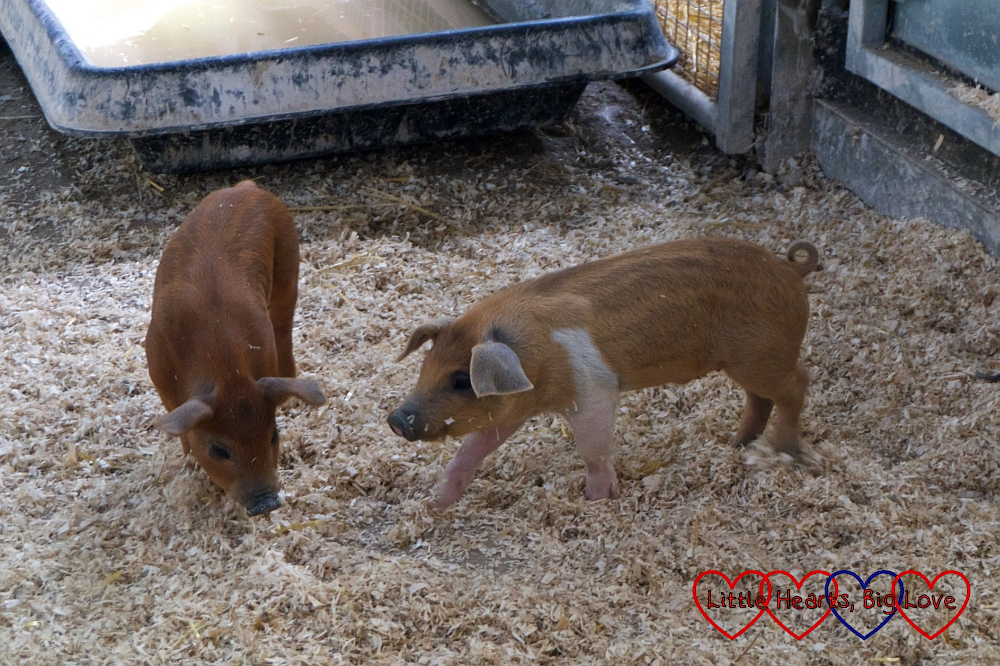 We finished feeding the animals just in time to go and see the racing pigs. I loved the names of the pigs who were running in the race. They were Uswine Bolt, Voldesnort, Lewis Hamilton, Justin Bieboar, Piggy Stardust and Beyoinkcé. Sophie had a prime view right in front of the finish line. The team handed out different coloured flags for the children to go with each of the pigs who had a coloured mark on their backs. I think our race might have been won by the green one, Justin Bieboar. It was hard to keep track of the colours though as the pigs raced to the finish line towards their feeding trough. 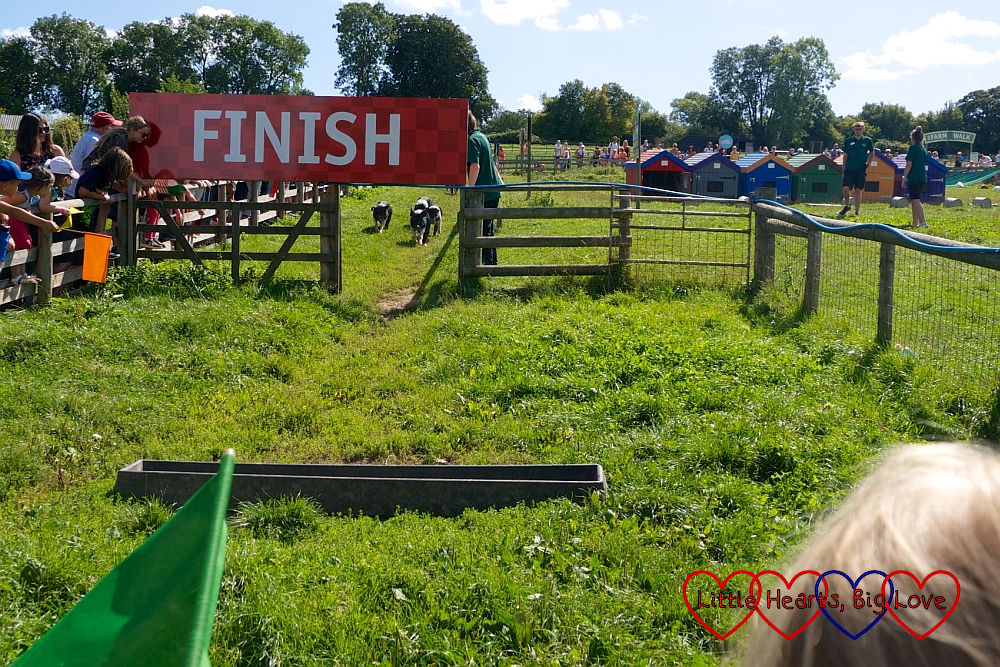 We found the second stamp in the dragon’s lair, near the sandpit. This was a good place to stop for some lunch as there were picnic benches next to the sandpit. Sophie had fun in the sand – filling up buckets, lifting them up with pulleys and emptying them out. It reminded me of watching her and Jessica playing together in the sand play area at Trentham Gardens almost exactly two years earlier. 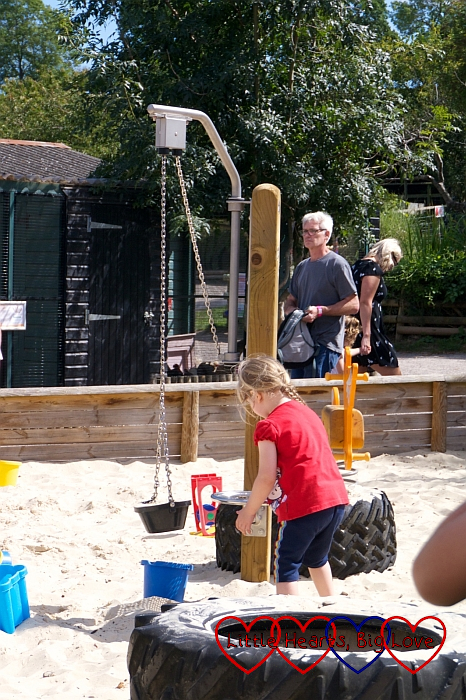 Stamp number three was a monster shaped one. We found this one inside the woodland maze. Sophie then headed for the dress-up scarecrows. She spent quite a while hunting for the perfect outfit for her scarecrow. 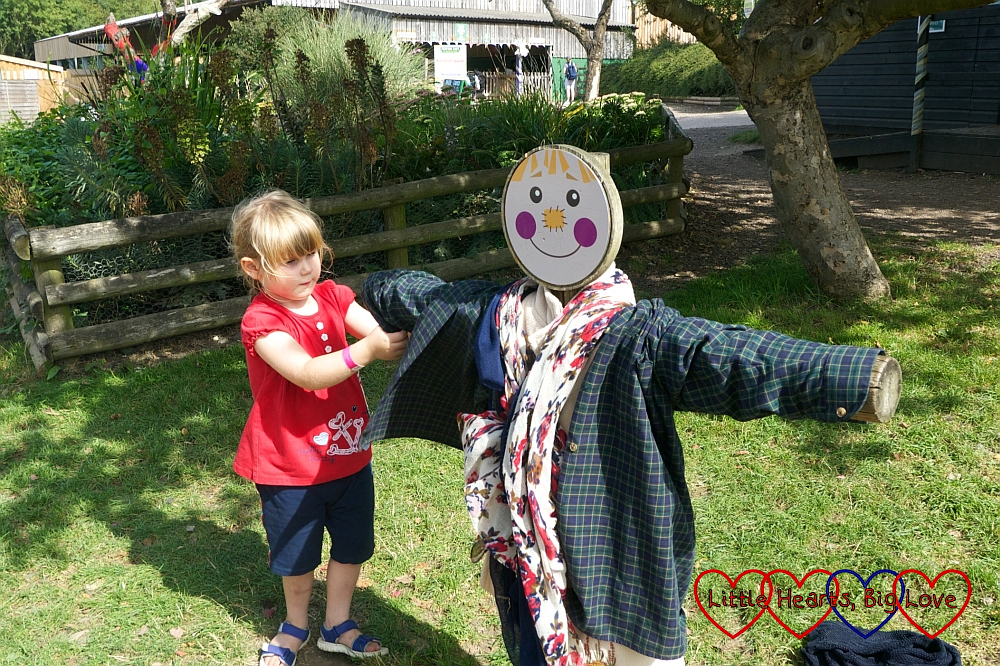 At the nearby wishing well, Sophie stopped to throw in a coin and make a wish. She stood there for a while looking down, lost in her own thoughts. I wonder if she was making the one wish that she tells me she’s made lots of times – the wish that we all keep wishing, but one that can never come true. 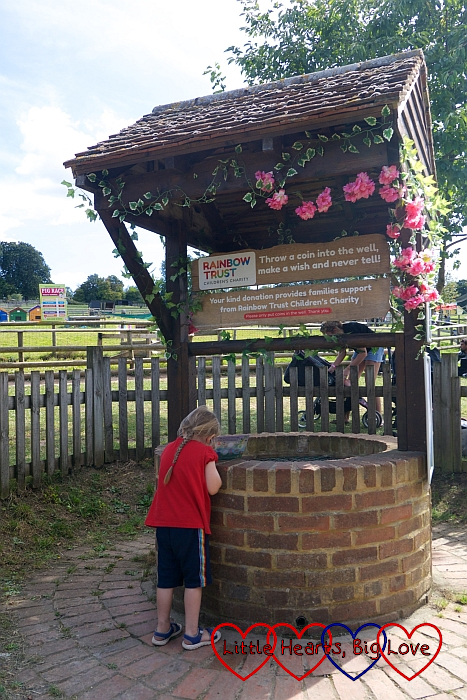 During the day, there are small animal encounters and goat milking sessions in the small animal village. We went to both sessions. Sophie loved being able to stroke a rabbit and a chicken, and watch a couple of the goats being milked. 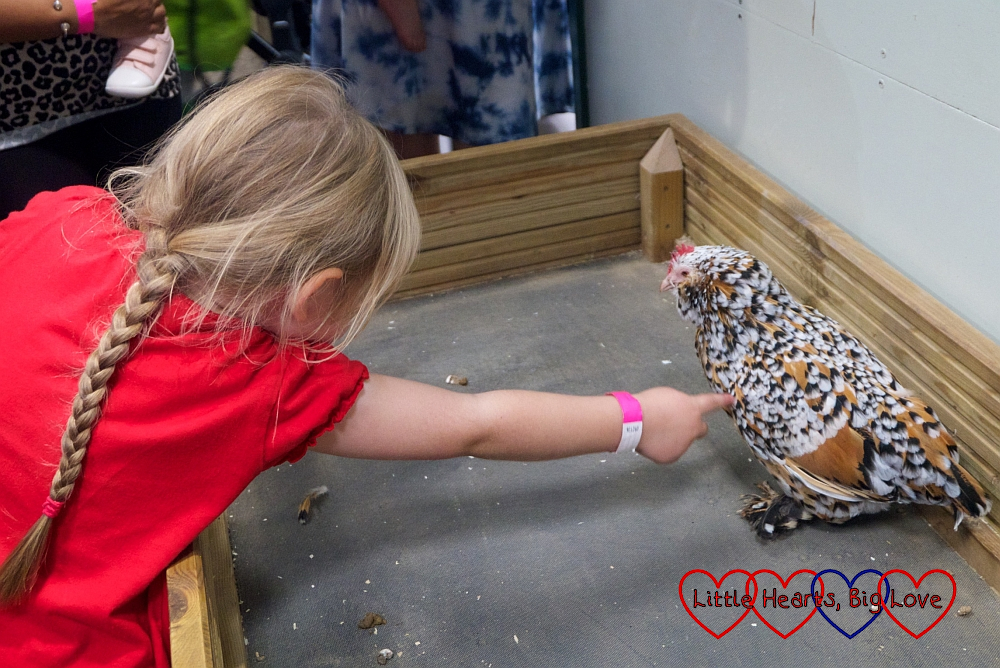 Back out in the play area, we found stamp number four – a mermaid – near the pirate lookout. This was another fun place for Sophie to play. It was great for encouraging a little imagination too. 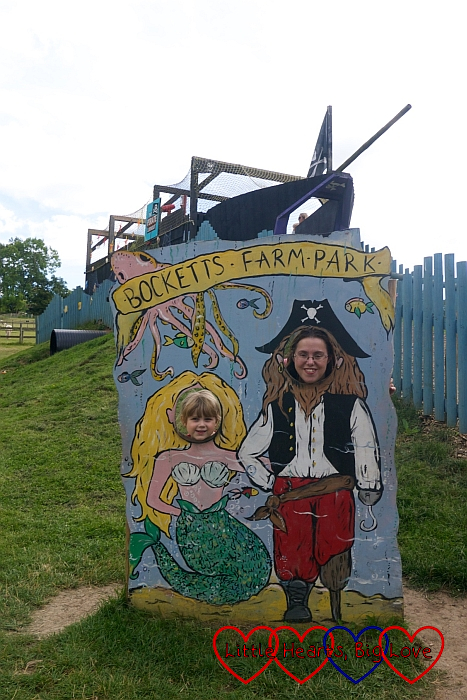 The pony rides were tempting, but the queue for these was very long. Instead, we headed for the jumping pillows and the go-karts. There are two go-kart tracks – one for younger children (5 and under) and one for older children. Needless to say, Sophie wanted to go on the bigger go-karts. She was the smallest child in the queue. Thankfully the go-karts were adjustable. I wasn’t sure if she’d manage to drive them, but she had no problems getting around the track, even if she wasn’t quite as speedy as some of the older children. 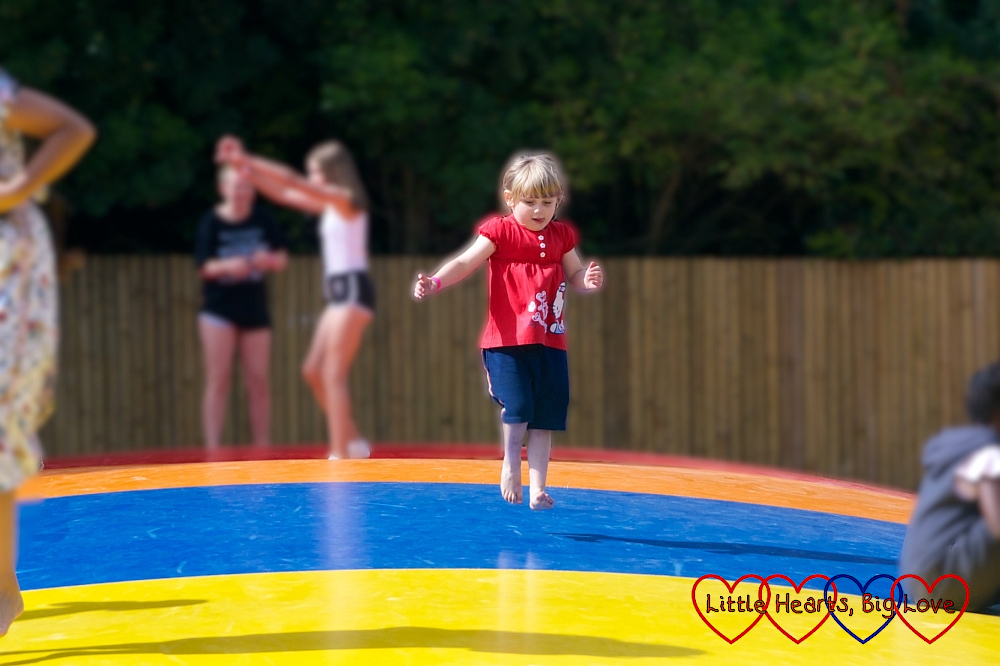 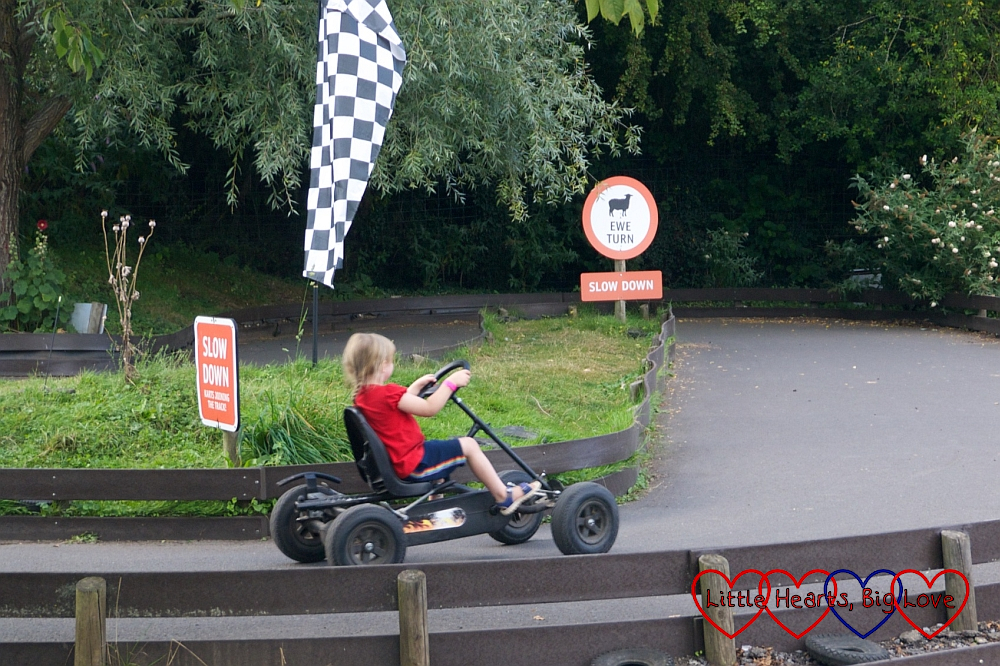 We found our final stamp near the fairies playground in one of the play areas. Our trail sheet complete, we headed back inside to the craft area, and received a sticker for completing it. Sophie also had fun making herself a fairy wand. 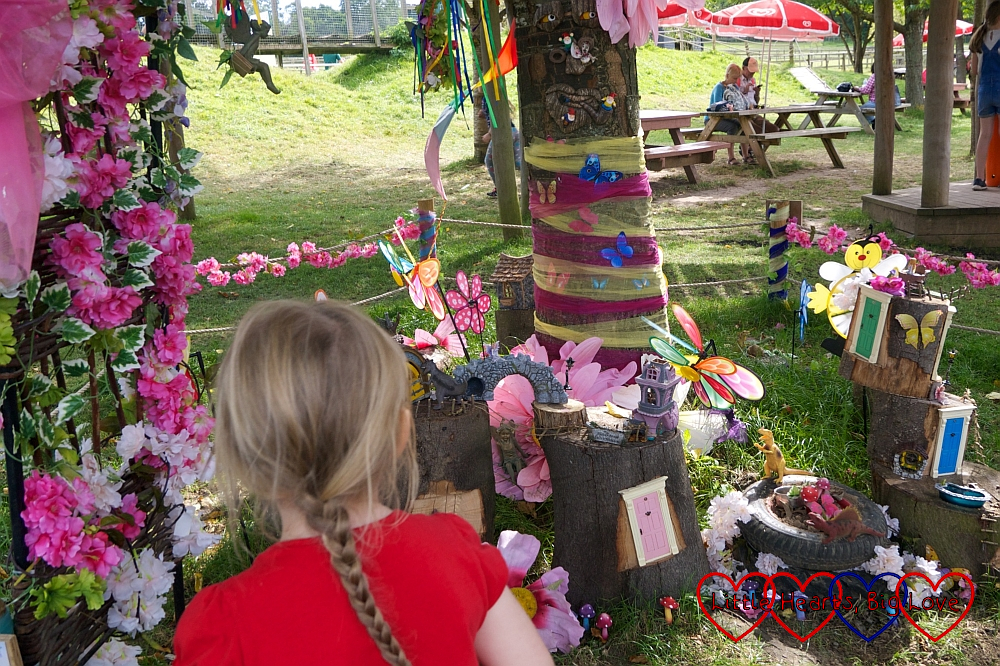 We finished off our day with a quick explore around the farm walk to see a few more animals and enjoy time in the Treehouse Towers play area. 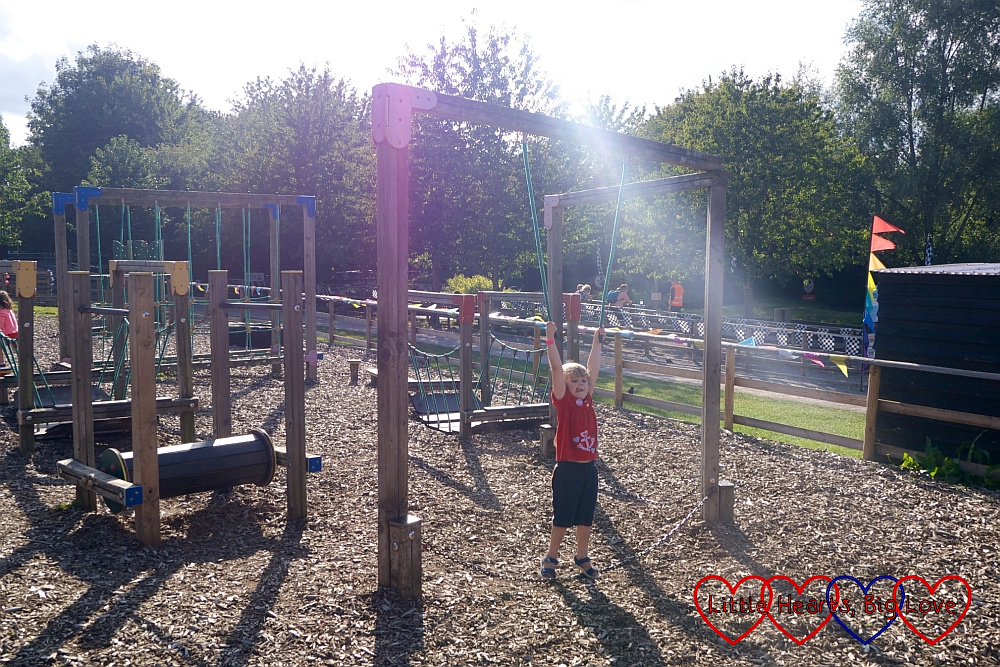 There is certainly plenty to keep the children entertained at Bocketts Farm Park – not just the animals. We spent a full day there and filled it easily. I’d quite like to go on a tractor ride if we went back again as that was one of the things we didn’t have time to do. It was a lovely day out and we all enjoyed our visit. 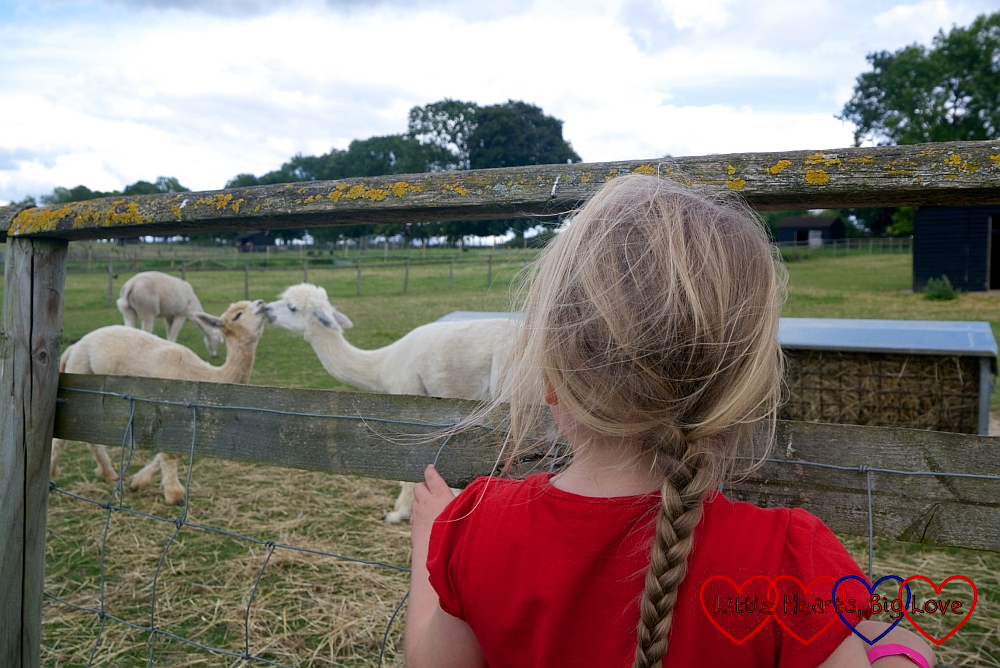 Visiting Bocketts Farm Park – what you need to know:

Bocketts Farm is open from 10am to 5.30pm every day throughout the year, apart from Christmas Day, Boxing Day and New Year’s Day. For more information click here.

3 thoughts on “A day out at Bocketts Farm Park”