“Hello, this is my wife. She’s in labour, but don’t worry, she’s just going to sit over there and get on with it.”

As introductions go, it was certainly memorable. My husband’s calm explanation as to why he’d brought his heavily pregnant wife to the set-up of an event was somewhat unusual. It certainly wasn’t where I had expected to be in early labour. 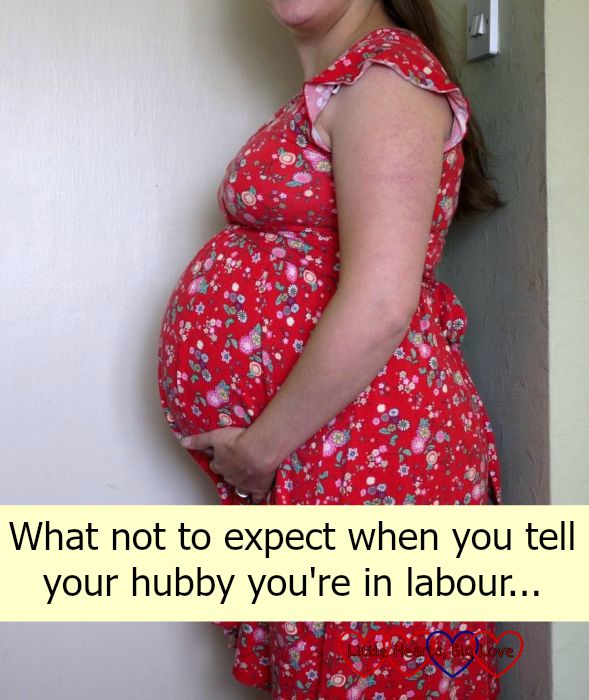 With a week to go before a planned 39-week induction, we hadn’t quite expected that things would start happening so soon. Hubby’s response to my announcement at 6am that morning that I might be in labour was to sit up in bed with a look of utter panic and exclaim “Not today! I have an event to set up!” It was possibly not the best thing to say to a pregnant woman in between her contractions, especially not when followed up with “it’s on the way to the hospital though” and “do you have any black maternity clothes so that you’ll blend in with the crew?” In his defence, he was married to a midwife and so was very aware of just how long first labours are likely to be. Plus he was relying on me to let him know when it really was time to go.

My waters broke while we were rushing around trying to pack our bags and go. I took a final look around the house, at the Moses basket in the corner of the spare room and prayed fervently that when I came home again, I would have Jessica with me. Hospital bag in the car, black maternity clothes on (although how on earth he thought I’d blend in was still beyond me) and we were off to start the set-up, with hubby’s dad following behind ready to take over running the event once we needed to go to the hospital.

The security guard at the venue looked at me suspiciously as we signed in but said nothing. The event manager looked quite alarmed as hubby calmly introduced me.

“Shouldn’t you be in hospital?”

And with that, hubby headed off to start setting up the event. Whilst I duly sat down in the crew catering room, TENS machine controls in one hand and a book in the other and proceeded to “get on with it.” I could sense the nervousness of the crew members coming in and out, as if they half-expected that any moment now I would suddenly start giving birth on the floor without any warning.

Hubby popped in and out to check that I was okay but by midday, I was ready to go. The hospital was still an hour’s drive away and I was starting to become more uncomfortable. We left his dad in charge of the event, promising that we’d keep him updated, although I didn’t think it would be likely that Jessica would arrive before the early hours of the next morning. Our journey to the hospital was a leisurely one though – we even stopped off at the services en route to have some lunch!

I was right in my feeling that it was still early on and my guess that Jessica wouldn’t arrive before the early hours was right too – she arrived just before 9am the next day, just over 24 hours after that memorable introduction. I’ve met a couple of people from that event since then – they tend to remember me much better than I remember them though. Given I was somewhat distracted at the time, that’s not too surprising! Four years on, I still find it funny that hubby took me to work with him when I was in labour – I don’t think he’ll ever manage to live that one down!