There’s something magical about the first snow of the winter. That feeling of opening the curtains in the morning and seeing the garden covered with a blanket (or more usually, a light dusting) of snow. And the joy of being able to then turn around to the girls and sing “do you wanna build a snowman?” and see their little faces light up. 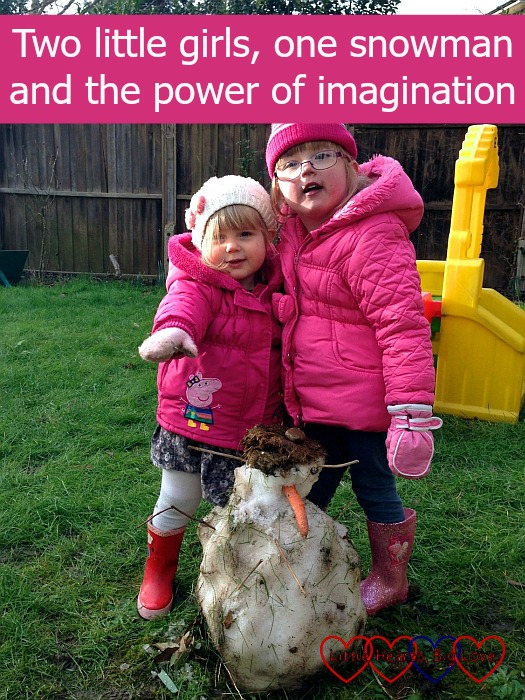 It might have been just a light dusting of snow, but there was definitely enough to build a snowman! The girls were dressed in record time and we all headed outside to make the most of the snow before it melted away. 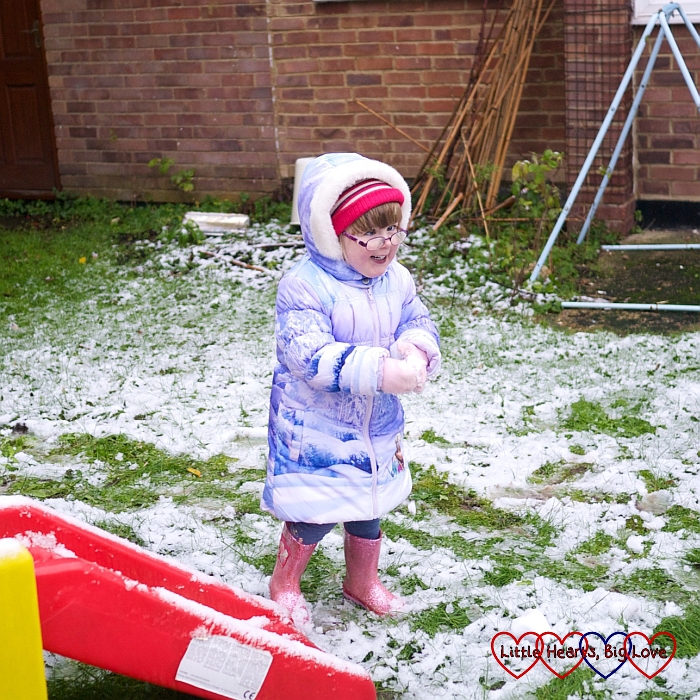 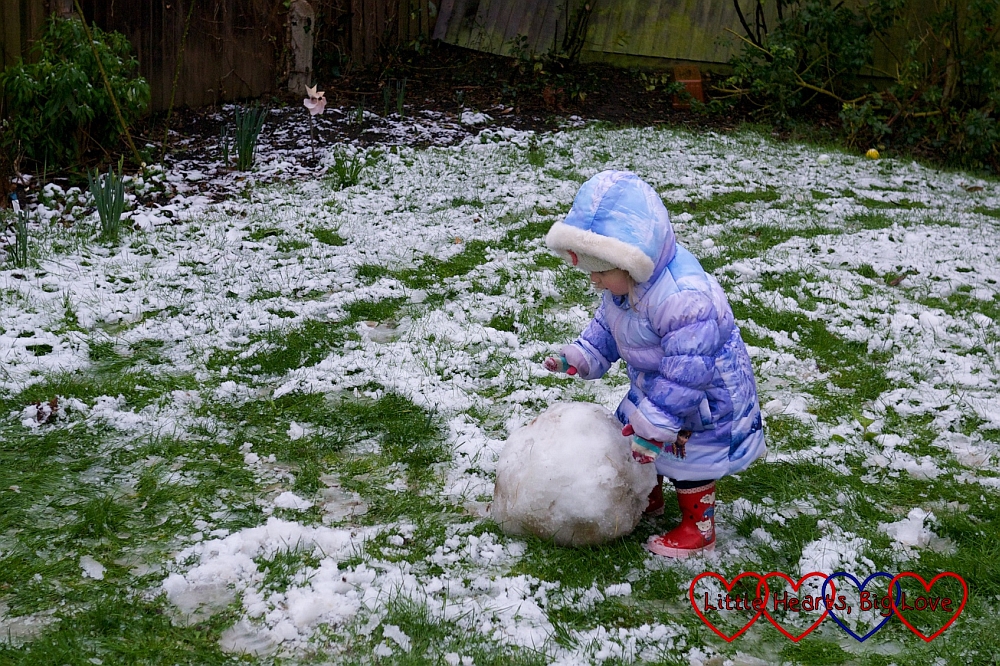 Naturally, he had to have a carrot nose and pebbles for eyes. The girls found some sticks to make the snowman’s arms and I found a hat for the snowman to wear. Jessica was a bit worried that the snowman would get cold though and insisted that he needed gloves and a coat. An old pair of baby socks made perfect gloves and an old coverall bib became a cape to help keep our snowman “warm” (something tells me Jessica didn’t quite understand about what causes snow to melt!) 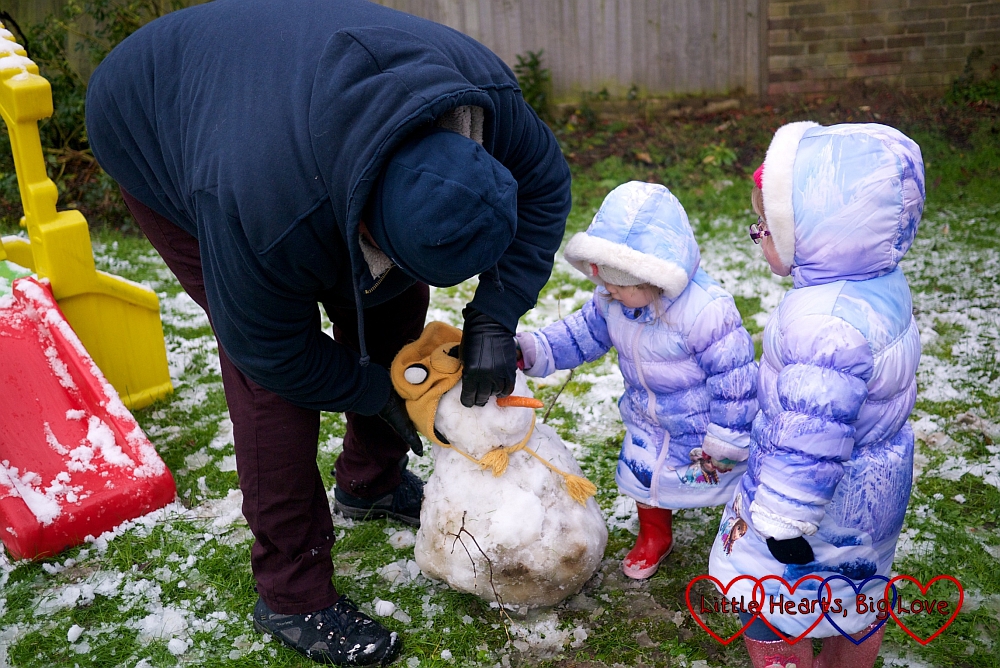 By the time our snowman was finished, Jessica was starting to get quite cold. She feels the cold much more because of her heart and her poor circulation meant that her fingers were starting to become painfully cold, so we headed in to get ready for church. It was just as well that we had headed out early as by the time we came home from church, most of the snow on the ground had melted away. Thankfully our snowman was still fairly intact. 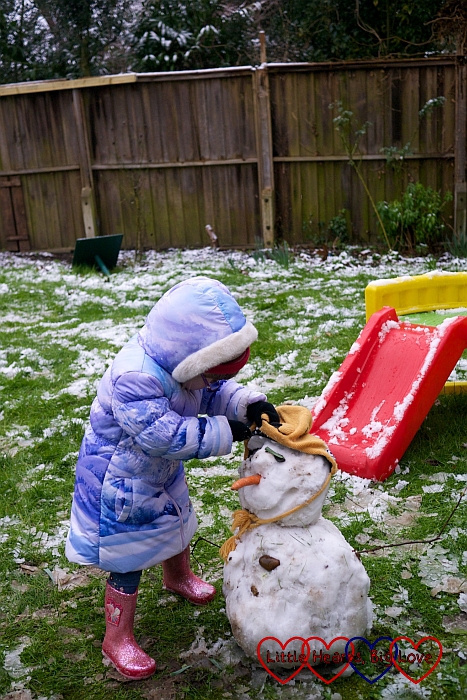 “I don’t want my snowman to melt, Mummy,” Jessica said several times that day. Sadly though there wasn’t much that Mummy could do to prevent this.

The next day, the snow was all gone but the snowman was still standing. He’d lost half of his head, his eyes and his carrot nose but there was enough snow still remaining to rebuild and redesign. Whilst Detective Jessica was busy investigating the case of the disappearing snowman, Sophie was busy resurrecting him. 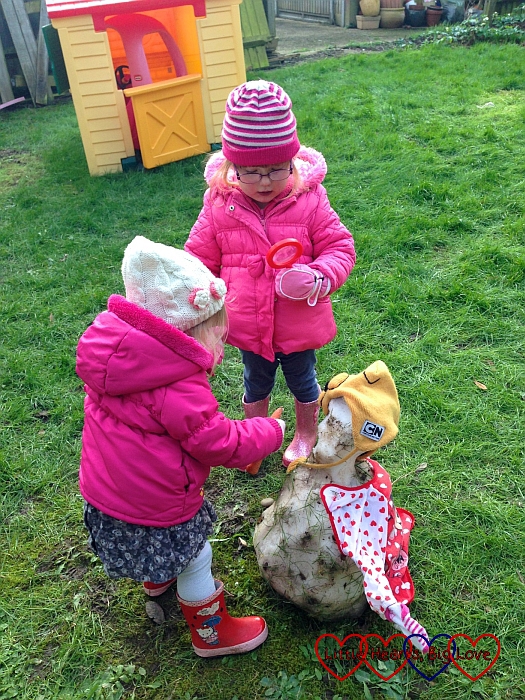 The pile of rotting grass cuttings in the corner of the garden was perfect for creating a toupee to disguise the snowman’s somewhat disfigured head  The carrot nose was put back in place and more stones were found to give him some eyes. Whilst the snowman’s stick arms were still in place, Sophie wanted to add a few more sticks, leaving me wondering at one point whether we were about to have a snow hedgehog. 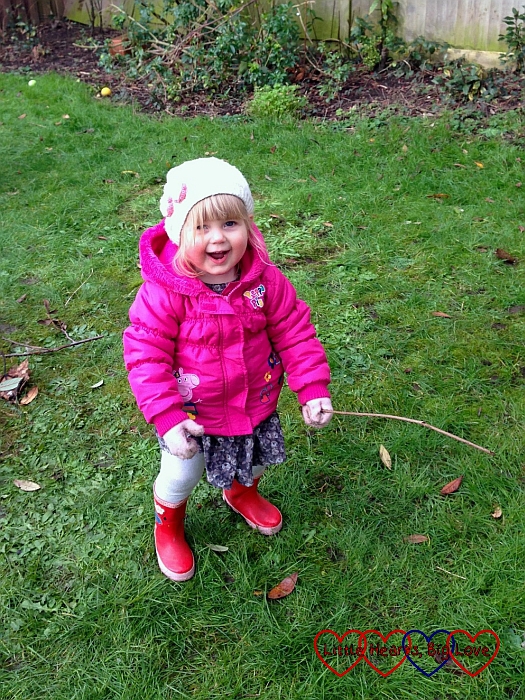 One of the sticks added to the snowman became a fishing rod with a leaf for a fish. Then Jessica decided that the snowman needed a cup of tea and an old flowerpot was just what was needed to provide it. Large leaves made very good plates so that the snowman could also have his dinner (fish and chips – with small leaves for fish and twigs for chips). Then of course, he had to have some cake for pudding and a large stone became a piece of cake with some berries being added to the plate as “sweeties” for the snowman. As you can imagine, I made sure that I reiterated to the girls that berries in the garden were pretend sweeties only and must never, ever, be put in their mouths. 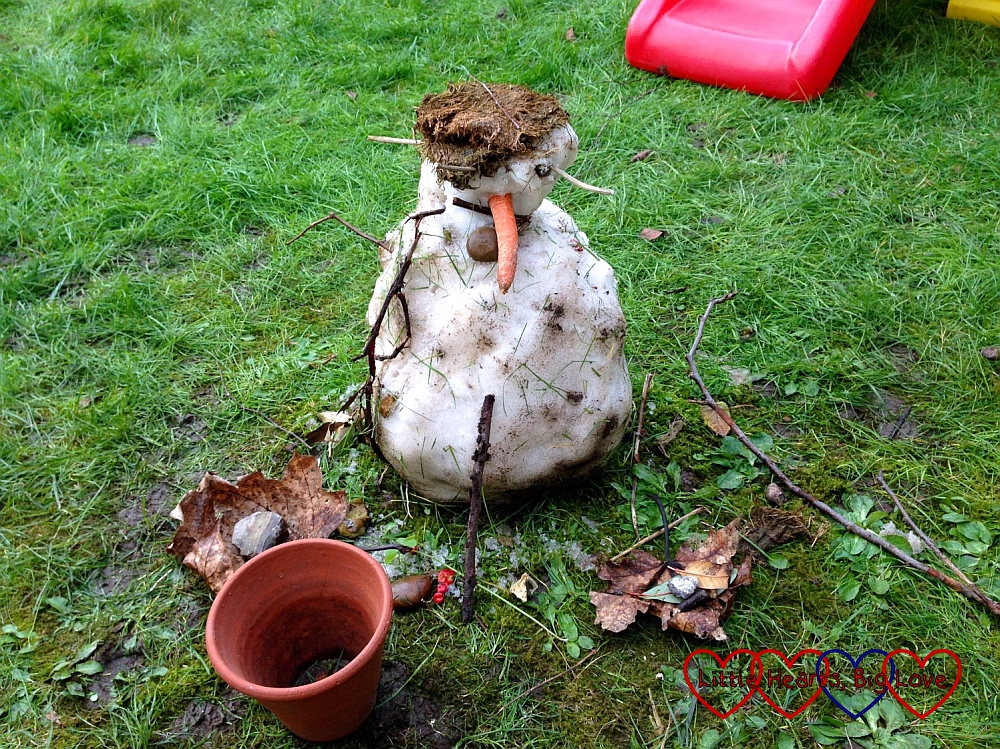 It was lovely to see the snowman providing so much fun and scope for imagination even after he had partially melted. I think we almost had more fun with him after the rest of the snow had melted and I loved watching the girls running around trying to find things for the snowman’s dinner. They were having a wonderful time with their frosty friend. It may well be that the first snow of the winter might be the only snow we get but at least we made the most of it!

19 thoughts on “Two little girls, one snowman and the power of imagination”