I remember thinking when I was pregnant with Sophie that I didn’t want it to be my last pregnancy. Despite the struggles of adjusting from one to two, and dealing with postnatal depression, there was a big part of me that just didn’t feel “done”, that wanted to have just one more. It’s something hubby and I have talked about on and off over the last few years. One thing was sure though – we both felt it was best to wait until after Jessica had her Fontan before trying for another baby.  As it turned out, things happened a bit little sooner than we’d originally planned. We found out we were expecting our third baby at the end of November – a month before Jessica’s Fontan took place. 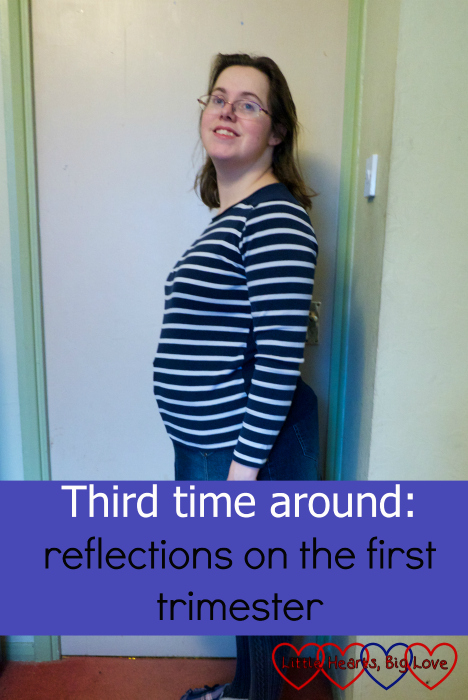 It was the tiredness that made me suspect I was pregnant. That first trimester exhaustion. I used to describe it as “being hit by the tired truck”. All of sudden, I found myself feeling completely exhausted by early evening. By the time the girls were in bed, I was done for the day.

The tiredness, and the nausea that came along a couple of weeks later, have been the hardest thing about the first trimester. They were at their worst while we were in hospital with Jessica after her Fontan. I found sea bands helped, along with drinking ginger ale, sucking on Werthers Originals and making sure I ate little and often. While the nausea and fatigue made the hospital stay more challenging, it did also force me to take regular breaks to eat and get sleep in where I could (something I’ve been rubbish at during previous hospital stays).

Food aversions were also a challenge while we were in hospital. Thank goodness for having an M&S on site with a reasonable choice of food! It was mostly a case of going for what was least unappealing though – there was so little that was even vaguely appealing and the few cravings I had were short-lived. I sent hubby out once for golden vegetable rice and Bovril, only to completely go off the rice two days later. I still can’t bear the thought of eating it! Salads were about the only thing that were vaguely appealing.

We’ve had three scans so far. We had a private scan at 7 weeks, just because I wanted to check that all seemed well with Peanut before we told the girls at Christmas. The day after we came home from hospital with Jessica, I had some bleeding and so we had another scan to check all was well. We then had our 12 week scan a week later. While all looked fine on the scan, my blood test results at this appointment have showed that I have low PAPP-A levels. 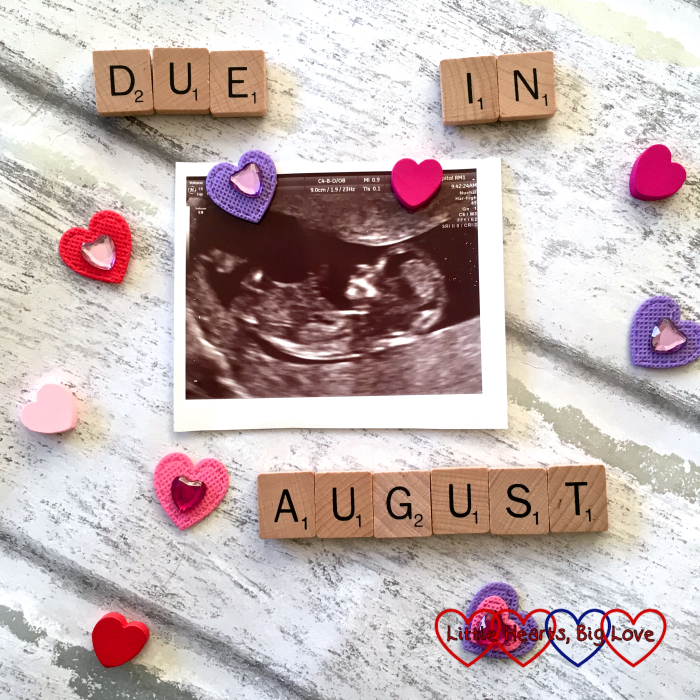 PAPP-A is a hormone that is produced by the placenta. Low levels are associated with an increased risk for pre-eclampsia, low birth weight and preterm birth. This means that I’ll be offered extra growth scans during the third trimester. We’ll also have extra scans to check Peanut’s heart as we have an increased risk of having another child with a heart defect. Having a potential concern flagged up this early on is worrying. Our history with Jessica makes us quite anxious when it comes to scans. I just hope that Peanut keeps growing normally and the next scans will be reassuring.

As was the case in my last pregnancy, the bump has made an early appearance. Hubby had to get my maternity clothes down from the loft at five weeks as I was just so uncomfortable in my normal jeans. It was such a relief to swap to maternity clothes and feel comfortable again! One advantage of being in hospital though was that there was less risk of people we knew guessing before we were ready to share our news. Once we were home, I had to consider my outfit choices very carefully!.  It’s a relief to finally have our news out and not have to keep hiding my bump.

We’re now at the start of the second trimester.  The nausea has eased off a lot now, and it’s nice to be able to enjoy food again. The tiredness truck isn’t hitting so hard. I’m still ready for bed by the time the girls go to sleep, but at least I have more energy in the day again.

Linking up with Let’s Talk Mommy for Bumps & Babies

13 thoughts on “Third time around: reflections on the first trimester”