I knew that having a baby would change me in many ways. Some of those changes were expected. I wasn’t surprised to be somewhat curvier after having my babies, for instance. Other changes were a little more surprising. While I’d accepted that I might never fit into my pre-pregnancy clothes, I wasn’t expecting that my shoes would no longer fit either. My feet are a whole size bigger now than when I had my first child.

Some of the changes though were just bizarre. In the run-up to my eldest daughter’s first Christmas, I suddenly discovered that I could no longer bite through sticky tape when wrapping presents. My front teeth just didn’t quite meet. A few months later though, things returned to normal. I forgot all about it until recently when I went to wrap a present for the first time after giving birth to my third child and found that the strange inability to bite through sticky tape had returned.

I asked a few of my fellow bloggers if they’d experienced any weird changes after giving birth. Here are some of the weird ways in which they found giving birth had changed them: 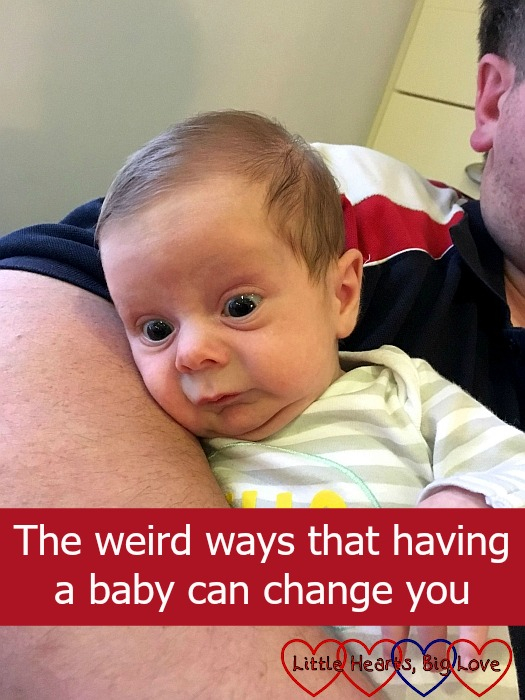 “I still have baby brain. My memory used to be fantastic, so much so people used to joke I had a memory like an elephant. Fast forward 2 kids and 2.5 years since I last had a baby and my memory is atrocious. As in I frequently forget my kids’ names bad and have to set reminders for everything or I will 100% forget.” Gee – Gee Gardner

“I’m always hot. Even in winter I only wear a really light jacket and that’s so I don’t look like a weirdo. Also I cry now. I never used to really!” Anna – Me, Annie Bee

“I have suffered from really bad skin after having children – gutted about it really.” Nicola – The Frugal Cottage

“I grew an inch and now have to wear 34in trousers instead of 32in ones. Apparently height or foot growth is very common in pregnancy.” Ness – Jibber Jabber UK

“A side-effect left over from pregnancy that didn’t go away after giving birth is red-hot hands! In the hot weather, my hands absolutely burn up. I have to hold an ice pack when it gets too much. I understand it’s a circulation thing when you’re pregnant but why it still happens after having children is anyone’s guess!” Emma – Happy Family Hub

“My hair isn’t straight anymore! Before children my hair was poker straight and not even perming would give it a kink any longer than 24 hours. Since having children it’s constantly wavy despite using hair straighteners.” Beth – Beth in a Box

“My hair changed colour – no, not grey. Used to have light brown, now it’s DARK brown. Only in the last 5 years since my daughter was born.” Chantelle – All Things Christmas

“I used to have really curly hair. Since having the kids my hair isn’t curly anymore and I really miss it!” Nikki – Yorkshire Wonders

“I still have sense of smell that can detect the slightest scent from 500 paces. It’s my spidey sense. A bit of a dubious honour when it comes to nappies etc, but hey ho.” Kate – The Mum Conundrum

“I developed asthma during my pregnancy with my eldest and 14 years on I still have it and probably always will!” Laura – Five Little Doves

“I didn’t have rheumatoid arthritis before having a baby but now I do!!!! I probably did but I didn’t have any effects until I had my first!” Lottie – The Haymans

“Meat aversion. I had this in my last pregnancy and I thought I’ll be back eating steaks after giving birth, but nope, I still can’t stand the look or smell of any meat!” Raimonda – Cosmo Mum

“I’m really allergic to avocado now! If I eat it I’m vomiting and ill for days! Which really sucks as I love the stuff.” Hayley – I Am River

“I can’t stand ginger anything now. Not sure if that was down to everyone telling me it helped morning sickness or not, but Gingerbread Lattes are no longer a good thing!” Tina – Girls’ Gospel

“Emotions! Not that I was an emotionless robot before kids but I was never a crier, now I can’t switch the tears off! Sad movie, charity adverts, sob stories on daytime TV, the tears just flow!” Emma – Emma Read

“I cry at the end of every movie, doesn’t matter what the genre is” Kiddo Adventures

“I’ve always been afraid of heights but now its different level. I cant even look down a flight of stairs.” Mixed Up Mama

“I’m a big wuss since having kids. I used to love the thrill of a rollercoaster or being scared stupid watching a horror movie. Since having kids I am too scared to do either!” Claire – Life, Love and Dirty Dishes

“I can blow up balloons now. Never been able to until I had my second baby.” Helena – Babyfoote

There is hope though that some of the weird changes may only be temporary:

“Dont panic! I sold all my beautiful size 5 shoes as I was the same as you – my feet grew in pregnancy but never went back again. Until my youngest was almost 5 years old. I have recently had to start buying smaller shoes again and a lot of the shoes I have worn for the last few years I now can’t wear as they are too big! “ Emma – The Money Whisperer

Did you experience any weird changes after giving birth? Let me know in the comments below!