Two girls took a stroll through the deep dark wood.

The girls saw a sign for a trail that looked good.

“Gruffalo Spotters” the eldest one read;

We’re off on a hunt for the Gruffalo!” 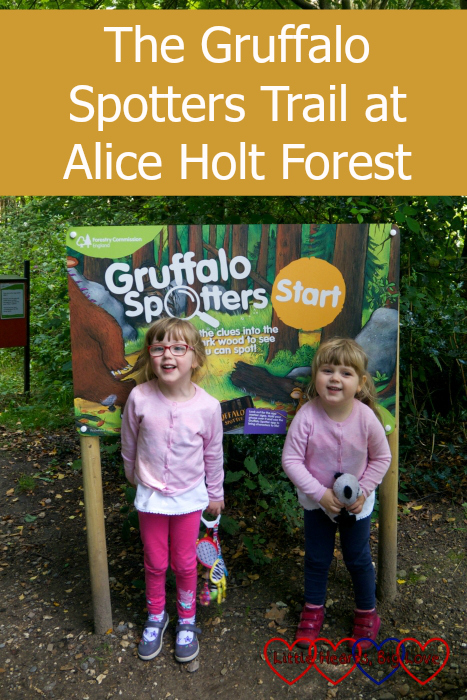 We last hunted for the Gruffalo at Alice Holt Forest back in 2014. This was our first trip back there since then and it has certainly changed a lot since then! There is now a new visitors centre, café and play area. The Gruffalo trail is also very different. Last time we were looking for cut-out animals from the Gruffalo story. This time we would be using an app and virtual reality to help us find them. 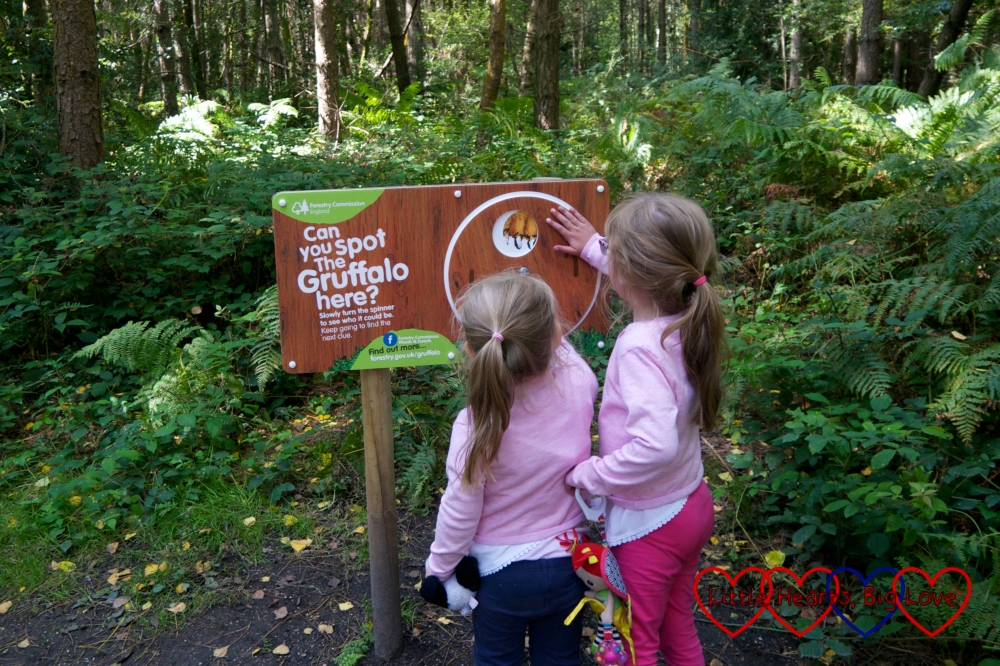 The first animal we were looking for was the Mouse. I loved the fact that there were interactive clues along the way, helping the girls to guess which animal it was that they were looking for. 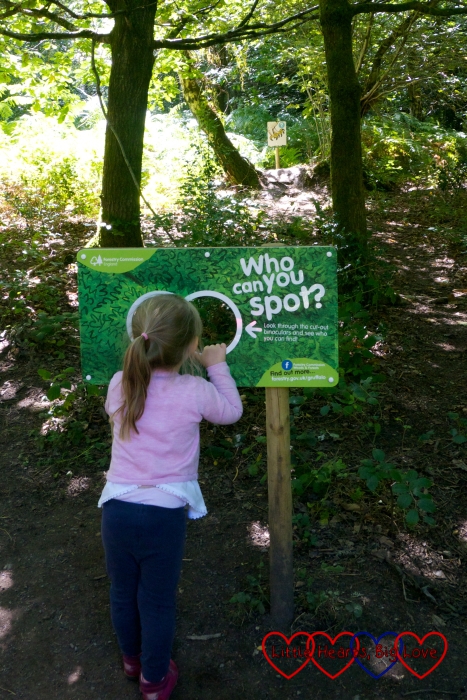 As we got nearer, we found some cut-out binoculars to help us spot the animal we were looking for. The girls had a quick look, but decided it was much more fun to pop their heads through instead and pose for a photo! 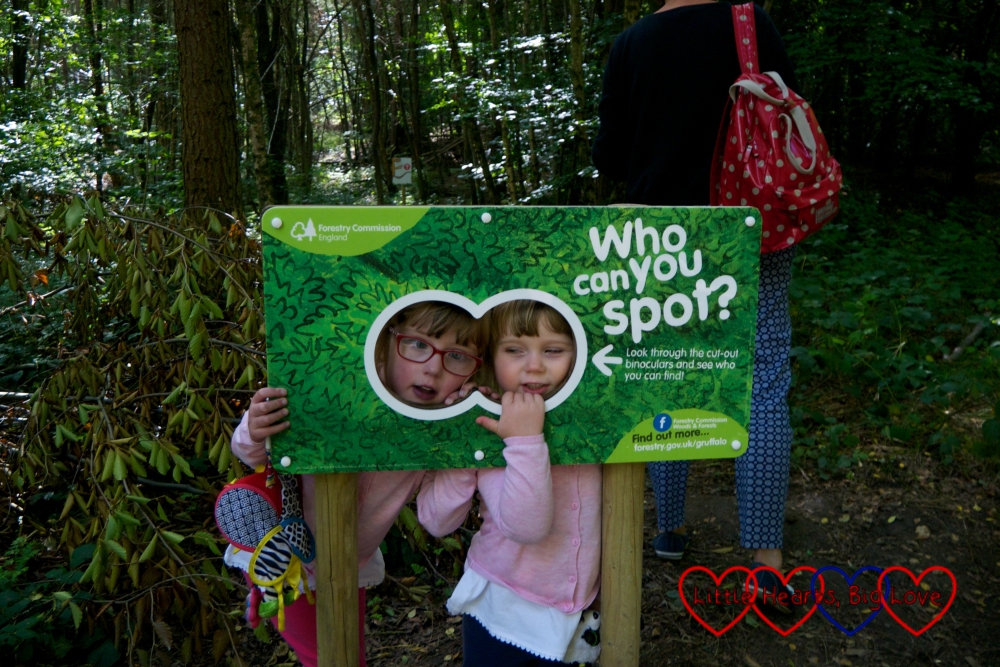 We soon spotted a big sign telling us that we had found the Mouse. Near the sign was a circle with mouse footprints on. When we focused in on the circle using the Gruffalo Spotter app, the Mouse appeared on the screen. The girls loved watching the initial animation showing the Mouse jumping on to a tree stump. After a few seconds, we could then take a photo using the app. 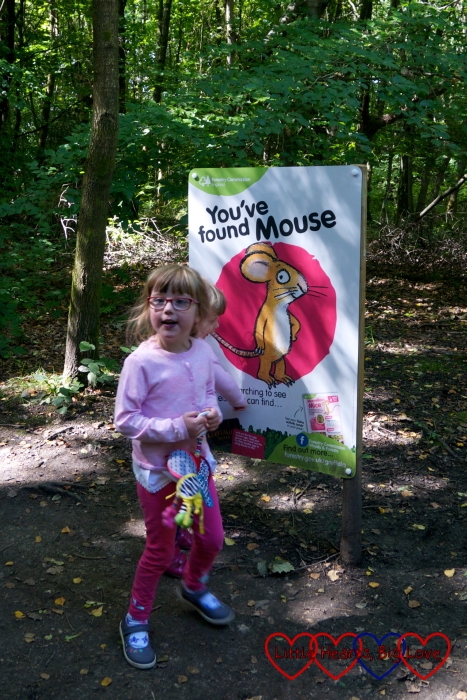 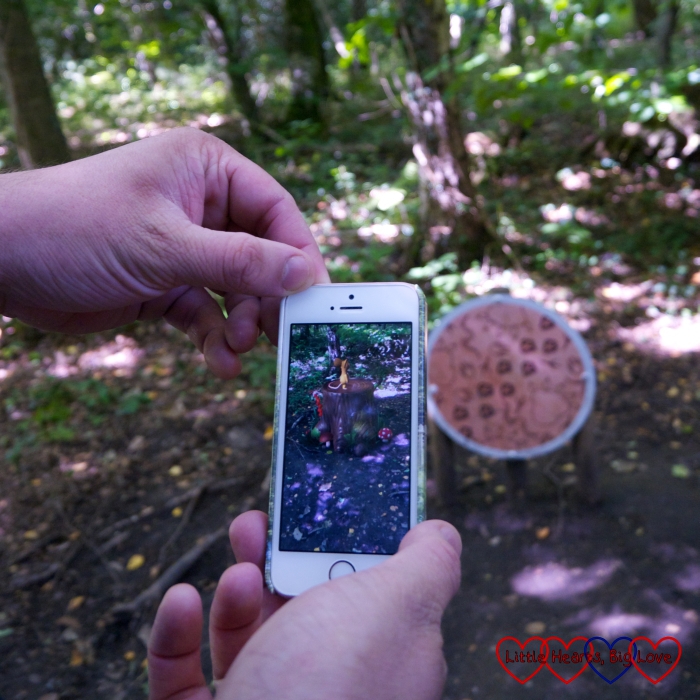 Once the app had detected the circle, we were able to move the phone around to adjust our view of the Mouse as long as there was a clear view from the phone to the circle. This made it quite easy to try and take photos of the girls posing with the animals at each location. We did have a little wait at most of them though as there were quite a few families following the trail that morning. 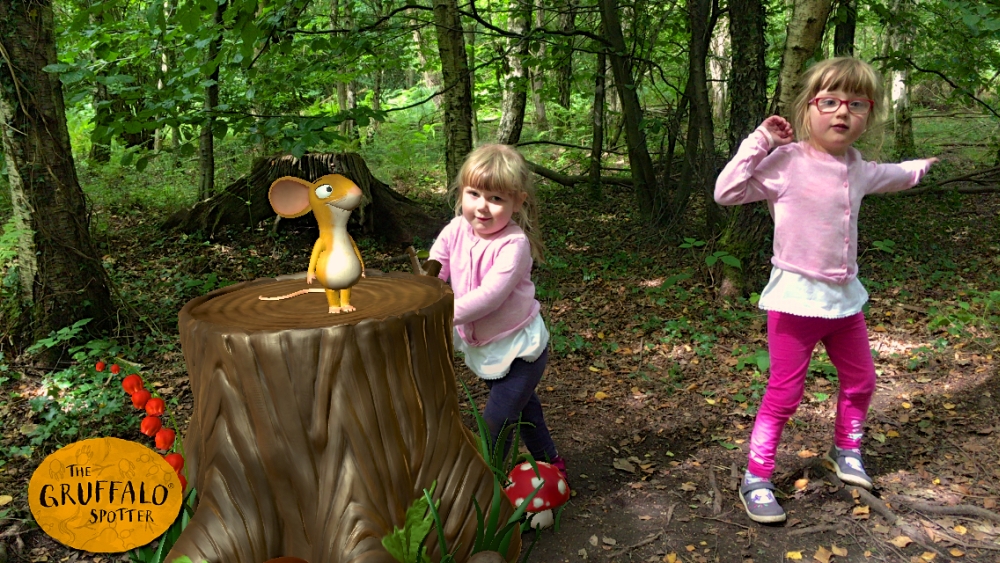 The next animal to find was the Fox. We found the Gruffalo’s Child along the way and stopped to pose for a photo. 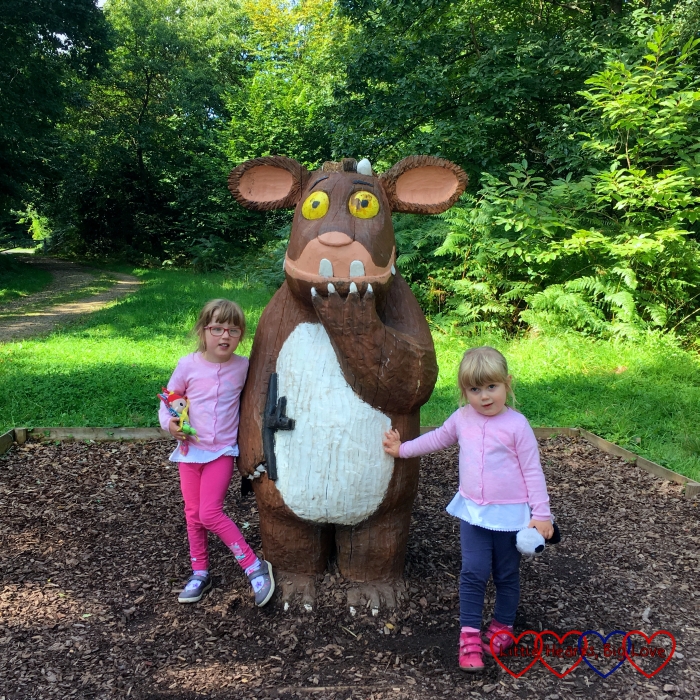 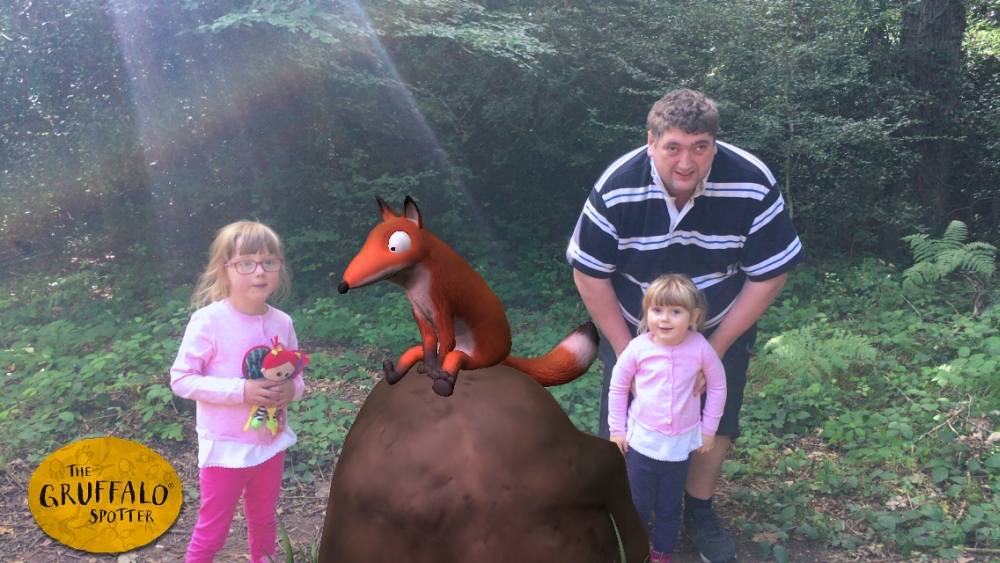 The next part of the trail took us near the den building area. Jessica and Sophie stopped to explore some of the dens. I loved the fact that there was also a den for wheelchair users. Jessica needs her buggy more and more on days out now and it’s made me much more aware of the importance of accessibility. My first thought now when taking both the girls out somewhere is whether it is accessible. If we can’t take Jessica’s buggy and there is a reasonable walk (more than half a mile) involved, then I can’t manage it by myself with the girls. We can explore a little further when hubby is around though. He can carry Jessica on his shoulders if needed, but as she gets bigger, this becomes harder to do. 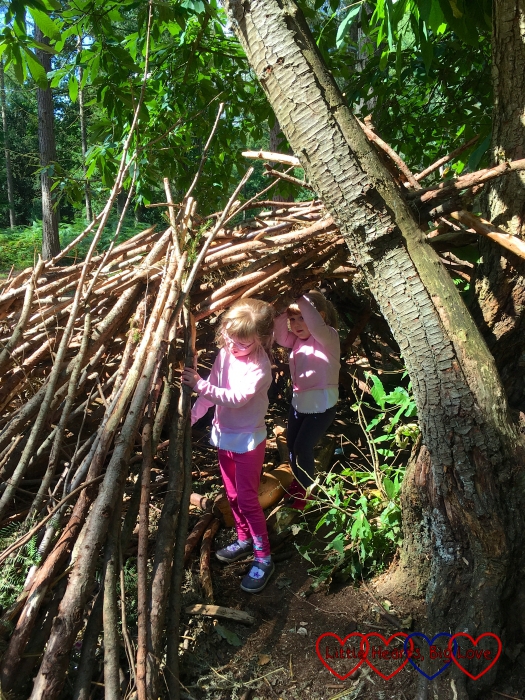 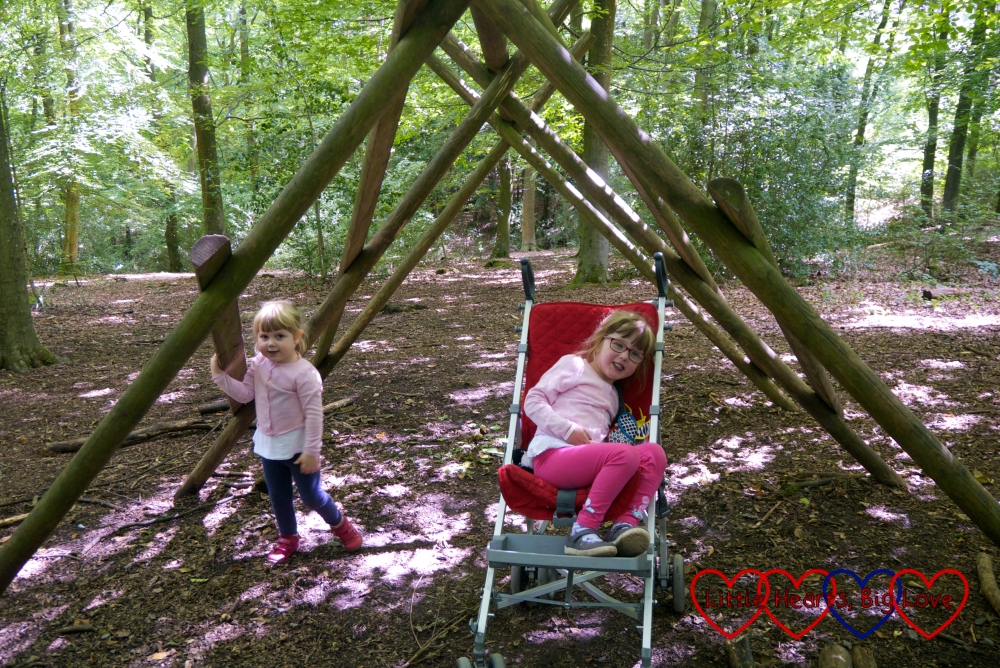 We had no problems getting around the trail with Jessica’s buggy. Alice Holt Forest also has a Changing Places disabled toilet. This isn’t something we need for Jessica but it’s good to see that Alice Holt does try to be accessible to all. If only more places were the same!

Once the girls had finished exploring the various dens, we continued with the trail to find the Owl. This was in a more shady spot and we had more difficulty making the app work as a result. 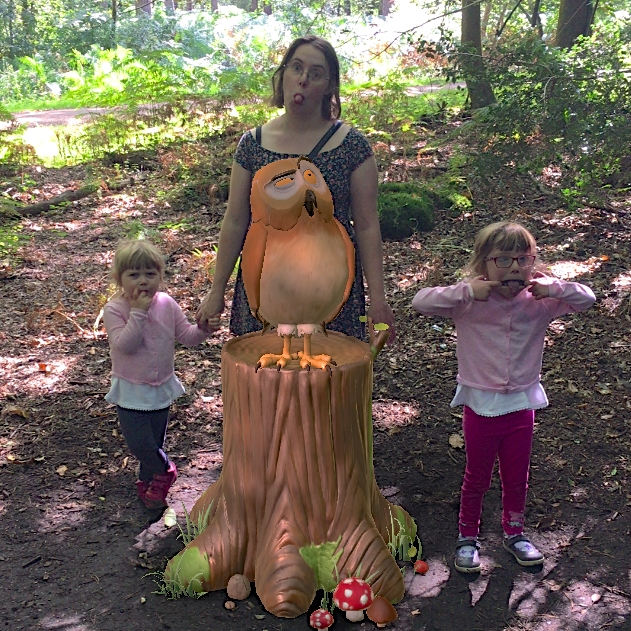 There were lots of blackberries ripe for picking in the bushes along the trail which helped to keep the girls going! I don’t know if they were different types from those from Grandma’s garden or if it was the effect of the walk on our appetites, but they certainly tasted sweeter from those we’d picked earlier in the week from Grandma’s garden. 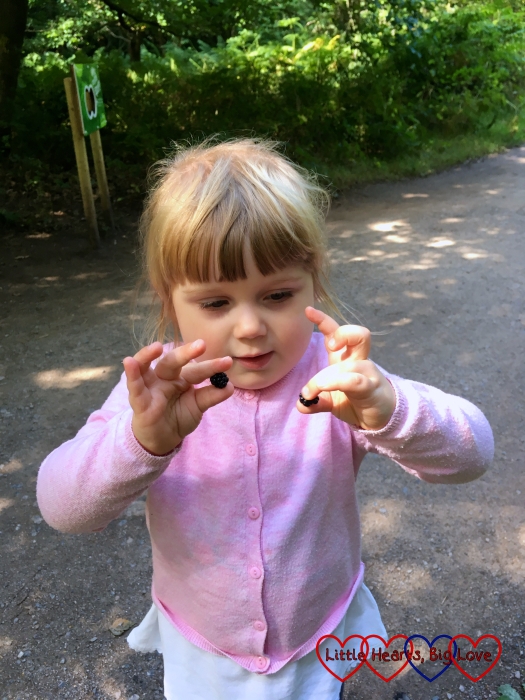 The next animal we found was Snake. The trail turned back on itself here which was a little confusing. We retraced our steps back to the Snake thinking we’d missed a sign – but no, we did have to go back on ourselves for a short way before the trail turned off again. Just the Gruffalo left to find now! 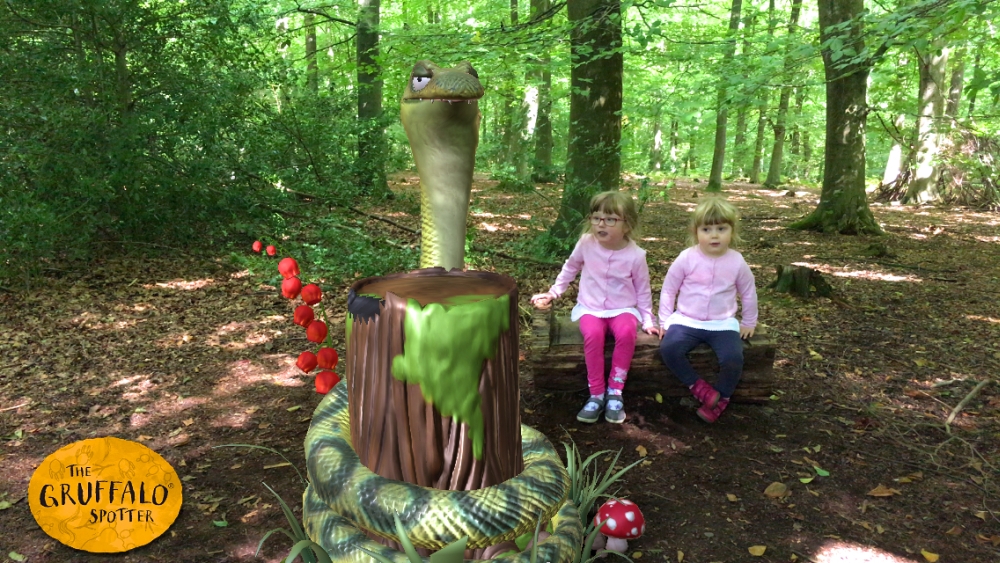 We soon found the animated Gruffalo and his sculpture in the woods with Stick Man next to him. I’m not sure I’d want to meet a Stick Man of that size running around in the woods! 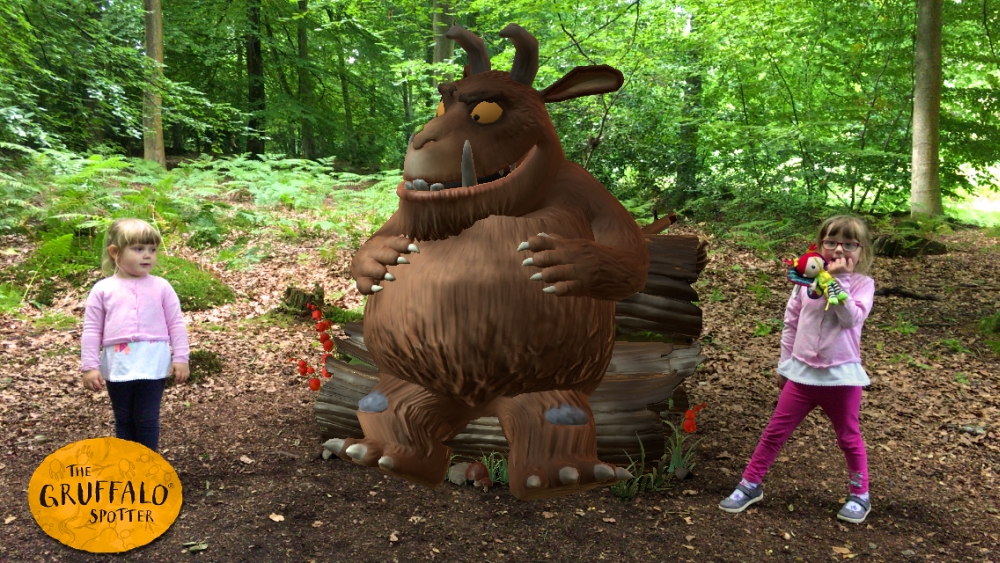 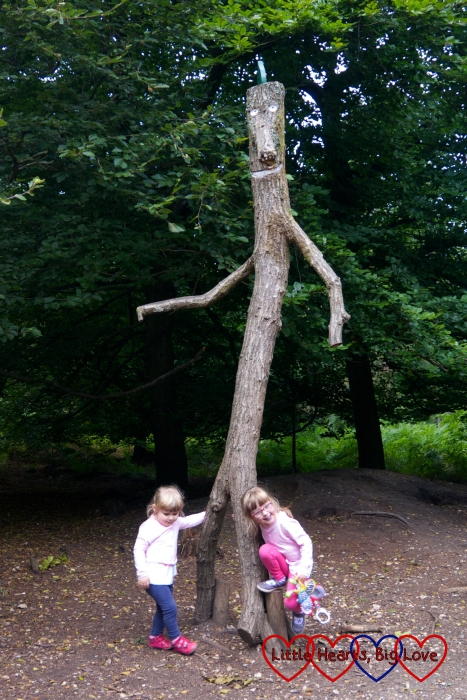 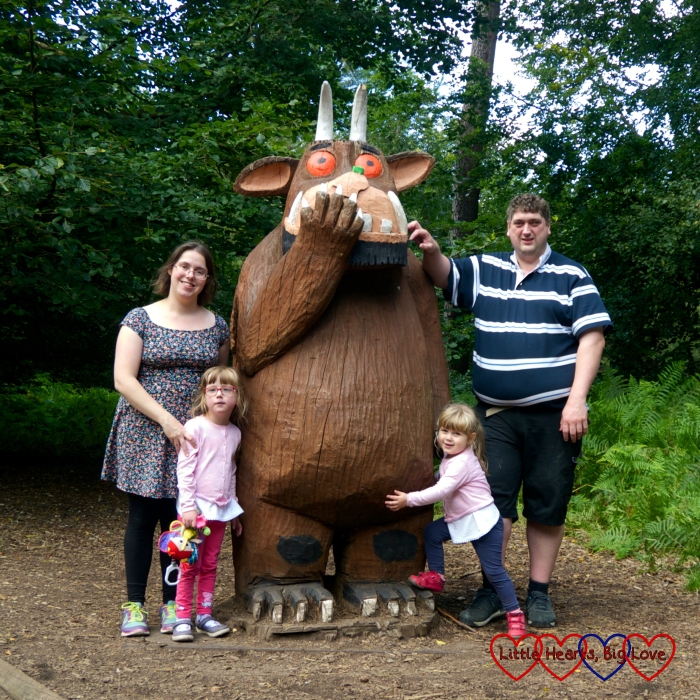 We finished off with a trip to the play area. There was plenty to do for the girls here. I was a little disappointed to see that there was only one item of play equipment that would have been suitable for wheelchair users though. Alice Holt had impressed me so far on the accessibility front but there are very few places with more than one accessible item of playground equipment. It would have been nice to see them go the extra mile on this front too. We are fortunate enough not to need it but there are so many other families who would appreciate this. 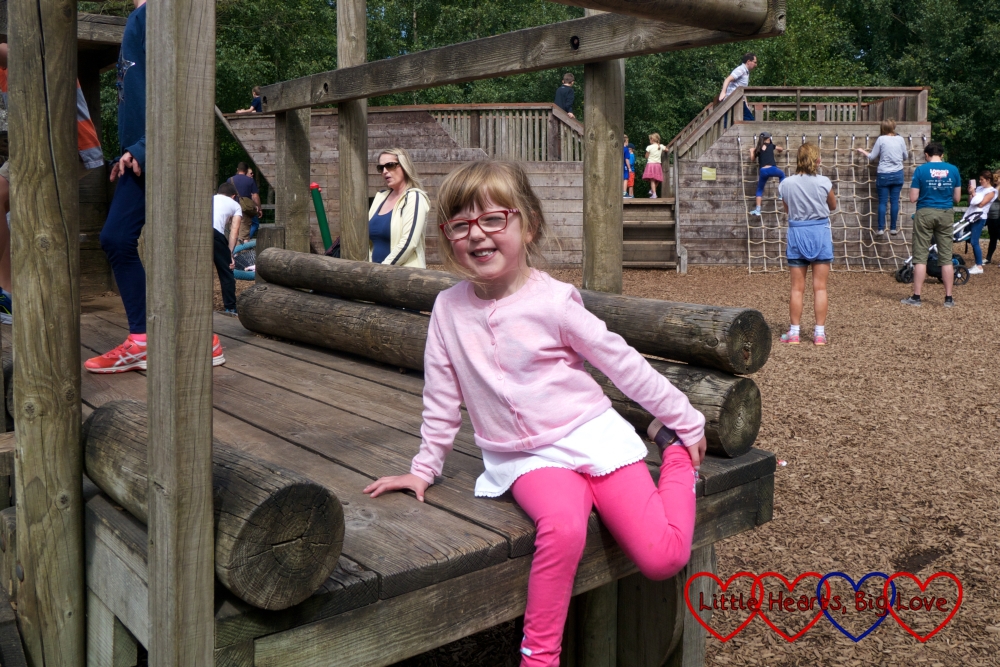 28 thoughts on “The Gruffalo Spotters Trail at Alice Holt Forest”