For the last few years, I have taken a photo of Jessica (and later Sophie too) to go on the Christmas card. We didn’t do this for Jessica’s first Christmas as she was in hospital having had open-heart surgery and sending cards that year was very low on our priority list. The following year, our Christmas card photo was of Jessica in a Santa dress sitting in front of the tree and then last year we had the fun of including Sophie too for a Nativity scene: 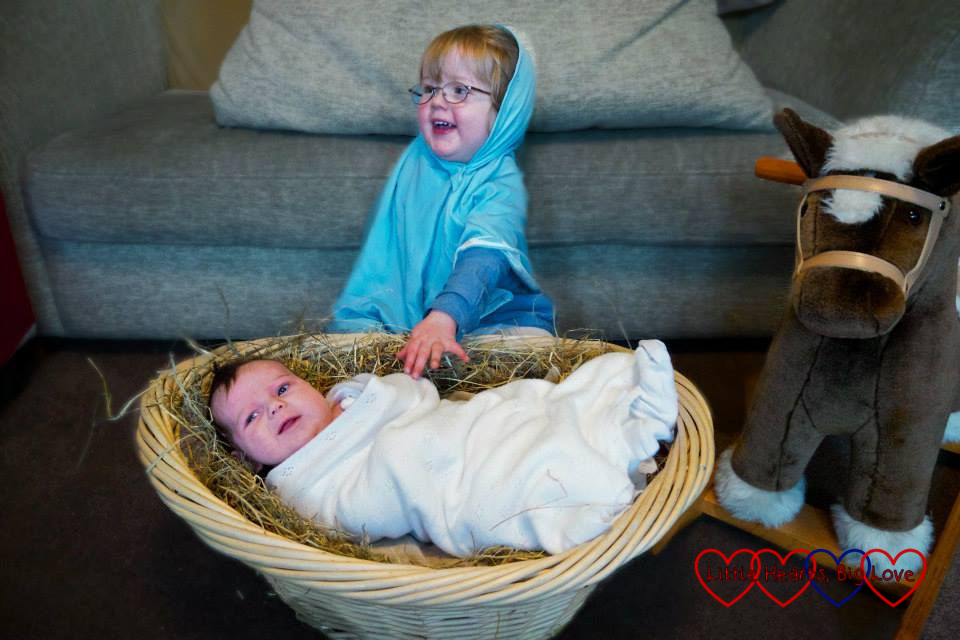 Now that Sophie is on the move, I thought it would be fun to do a snow scene with Sophie dressed as a snowman and Jessica in her winter clothes ‘building’ the snowman. However, Sophie on the move meant that there are now two children to try and keep still for long enough to actually take the photo (it was much easier last year with Sophie in the basket – although we had to take the photo quick before she objected to the straw!). 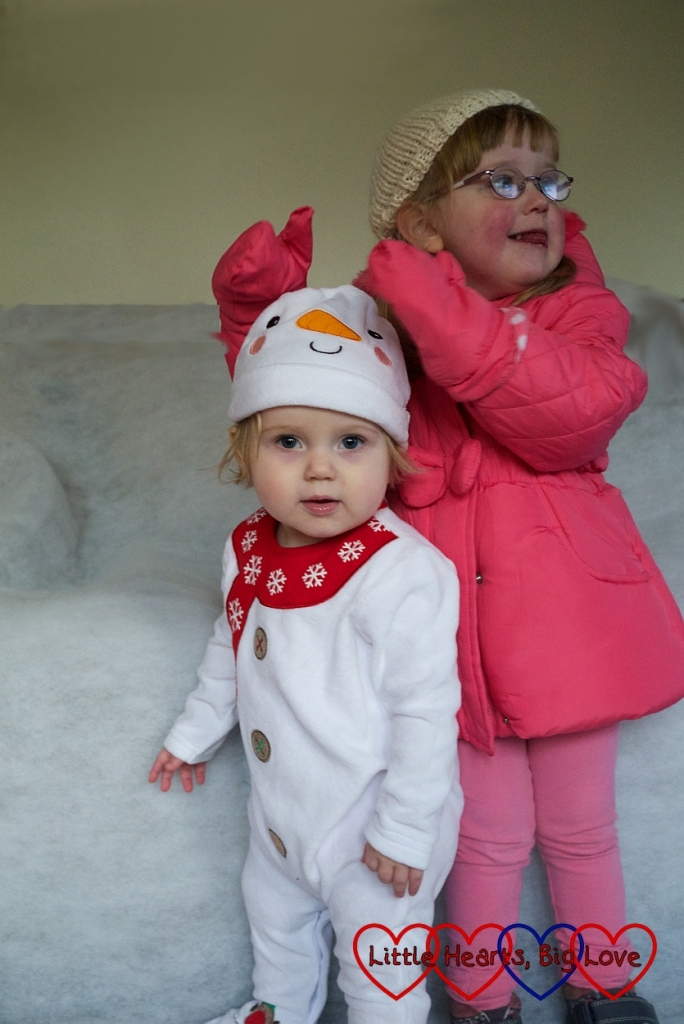 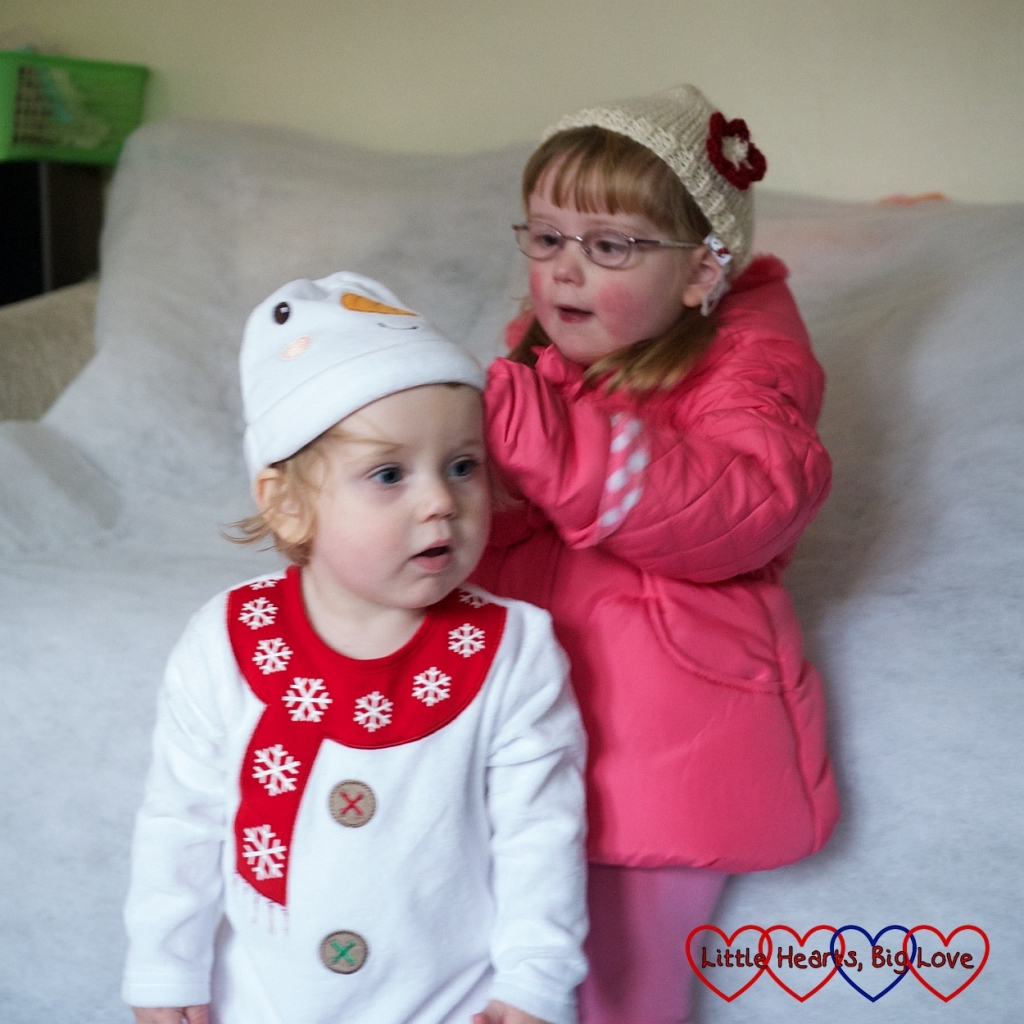 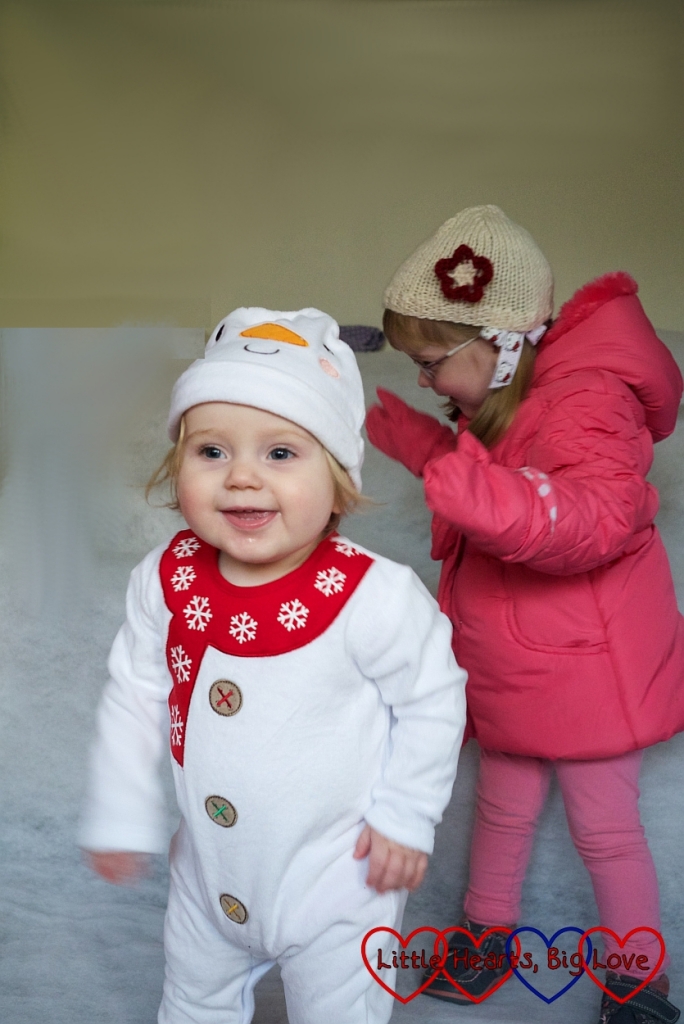 In the end, the only way to get the children to stand vaguely still was to put the TV on which is why in the final shot they are both looking away towards the TV – but it was the nearest I could get to the shot I was hoping for! 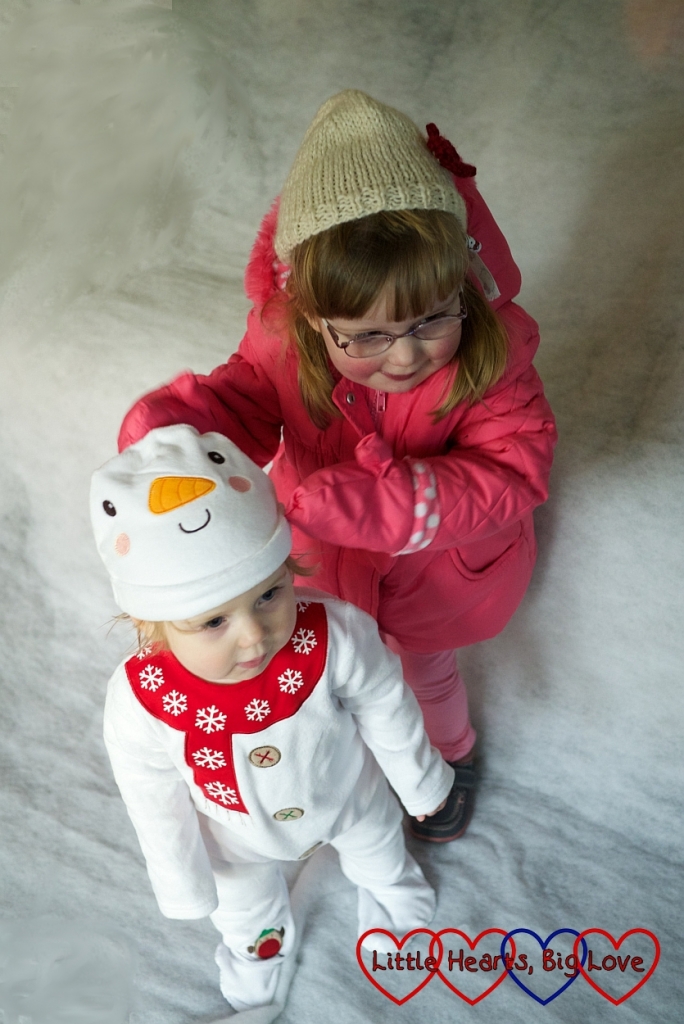 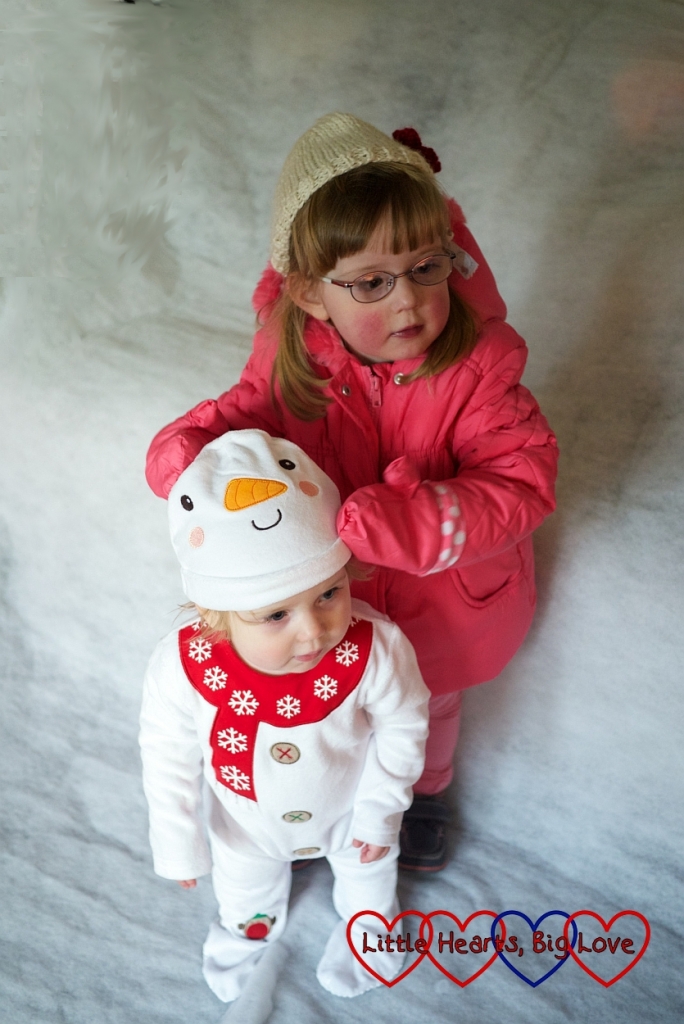 It’s been lovely to see their sibling bond develop over this past year. Jessica really has adjusted so well to being a big sister and there were so many lovely moments in the early days when she was just happy to give baby ‘Sofa’ (as she called her) a cuddle and kiss. Now Sophie has grown from a tiny baby into a little girl who is starting to play alongside her sister and it is lovely to watch them sitting on the floor playing together with toys. 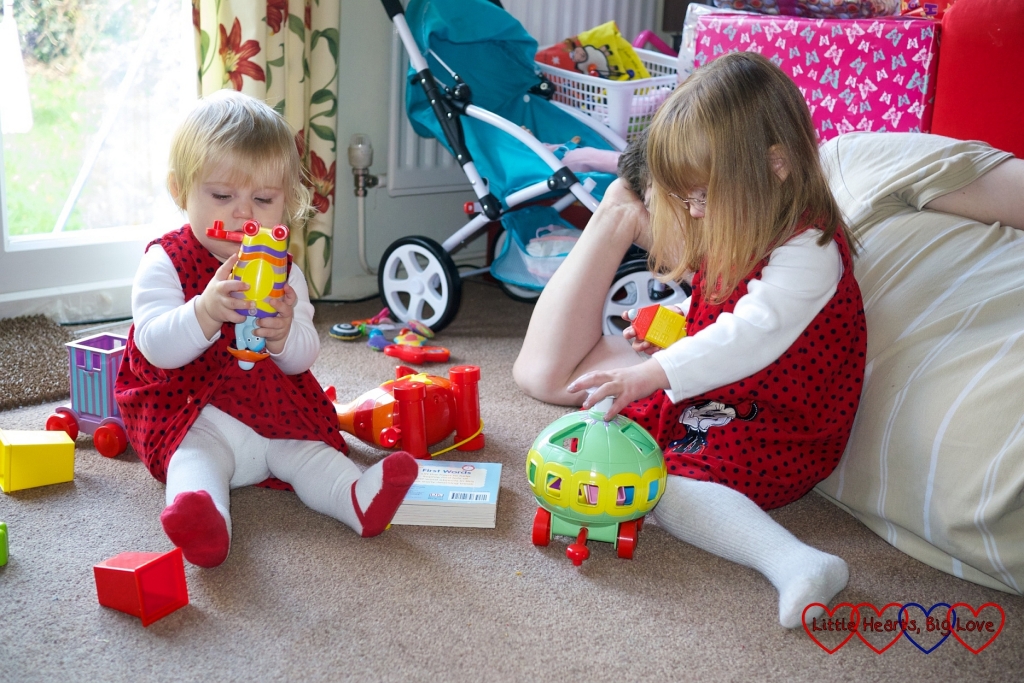 I first joined in with the Siblings monthly photo project back in May and it is lovely to have had that monthly focus and see how the relationship between the girls has changed in that time. Back in May, Sophie was just starting to become mobile and she still had her gorgeous sticky-up hairdo. Now the age gap between the girls feels less as they are starting to sit and share and play together. It does mean that we are definitely starting to get the moments when they both want the same toy or they annoy each other but on the whole, they are lovely together and it is lovely to see them walking about together and occasionally holding hands. I’m looking forward to see that lovely bond between them continue to grow and develop next year. 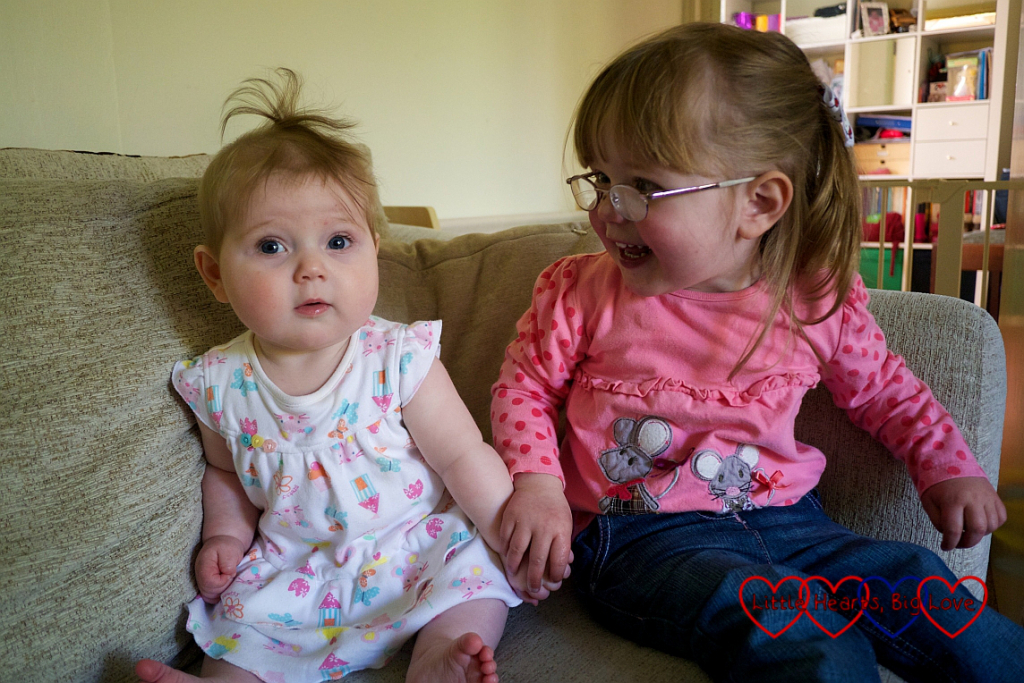