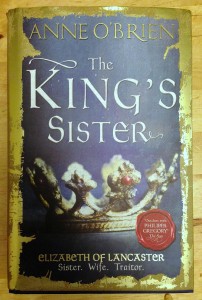 The King’s Sister tells the story of Elizabeth of Lancaster, the headstrong younger daughter of John of Gaunt and her marriage to John Holland, half-brother to King Richard II. The story is told in the first person, through the voice of Elizabeth, and begins in 1380, when seventeen-year old Elizabeth is given in marriage to the eight-year old John Hastings, Earl of Pembroke. The passionate, wilful Elizabeth is discontent with her husband, who is just a child, and falls for the dangerous charms of John Holland, who eventually seduces her. Elizabeth becomes pregnant with John Hasting’s child leading to the annulment of her unconsummated marriage with John Hastings and her subsequent marriage to John Holland.

The first half of the novel mostly concentrates on the will-they, won’t-they romance growing between Elizabeth and John Holland amidst the backdrop of John of Gaunt’s struggles to influence his nephew King Richard II as he reaches adulthood. The second part of the book, after a ten year jump in the timeline, focuses on the increasingly turbulent relationship between Elizabeth and John as they struggle under divided loyalties as John’s brother, Richard II, is deposed and Henry IV, Elizabeth’s brother, seizes the throne.

The first half of the book, despite the undertones of political turmoil, is lighter in tone and reads much more as a romantic novel than the second half which was much more dramatic due to the events unfolding and the deepening understand of the differing loyalties of John and Elizabeth and the impact these had on their marriage. Both John and Elizabeth are portrayed sympathetically as they both struggle in their own ways between being loyal to each other, and being loyal to their two brothers, as Kings of England, ultimately leading to treason and betrayal.

Like many historical novels, the characters felt a little too ‘modern’ in their actions and thoughts which whilst this helps the 21st century reader to connect with them, does not always feel like it rings true. That said though, I enjoyed reading this book – whilst I felt the first half of the book focusing on John and Elizabeth’s romance was a little over long, the second part focusing on their struggles through effectively being on opposing sides was much more gripping. I was fascinated to learn more about the life of Elizabeth of Lancaster, who I had read very little of previously, and the book has left me wanting to find out more about this period of history.

Definitely a book that will appeal to fans of Philippa Gregory or Alison Weir and an enjoyable read. Overall, I would give it an 8/10 rating.

I received a complimentary copy of the King’s Sister to review.  All thoughts and opinions are my own.