In The Night Garden is one of Jessica’s favourite CBeebies programmes. We thought that she and Sophie would enjoy going to see one of the live shows in Richmond. 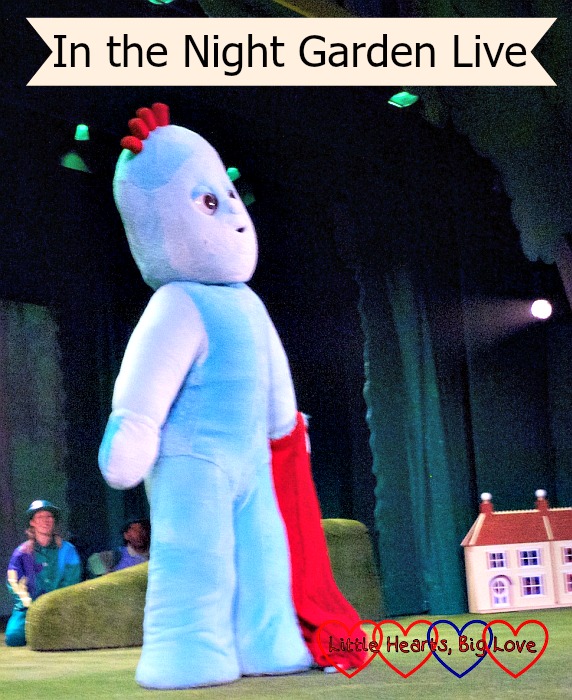 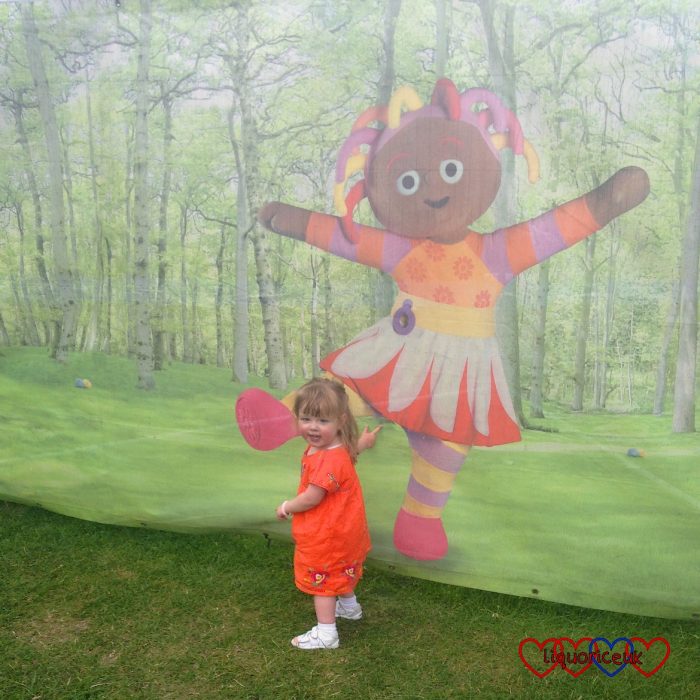 The show is held in an inflatable showdome. As soon as Jessica saw the pictures of all the In the Night Garden characters outside the showdome, she was very excited. She kept running over to them to point them all out to us. There was a little bit of a queue to get in. It wasn’t too long a wait though before we were inside. We collected a free souvenir brochure with all the words to the songs for the various characters (not that we needed them!) and lots of pictures and stories for Jessica to look at. We had opted not to buy a goody bag though. We’d checked the contents online beforehand and realised that we already had several of the items anyway.  There was plenty of space for buggy parking and lots of baby changing stations available (very important with two little ones in nappies!) 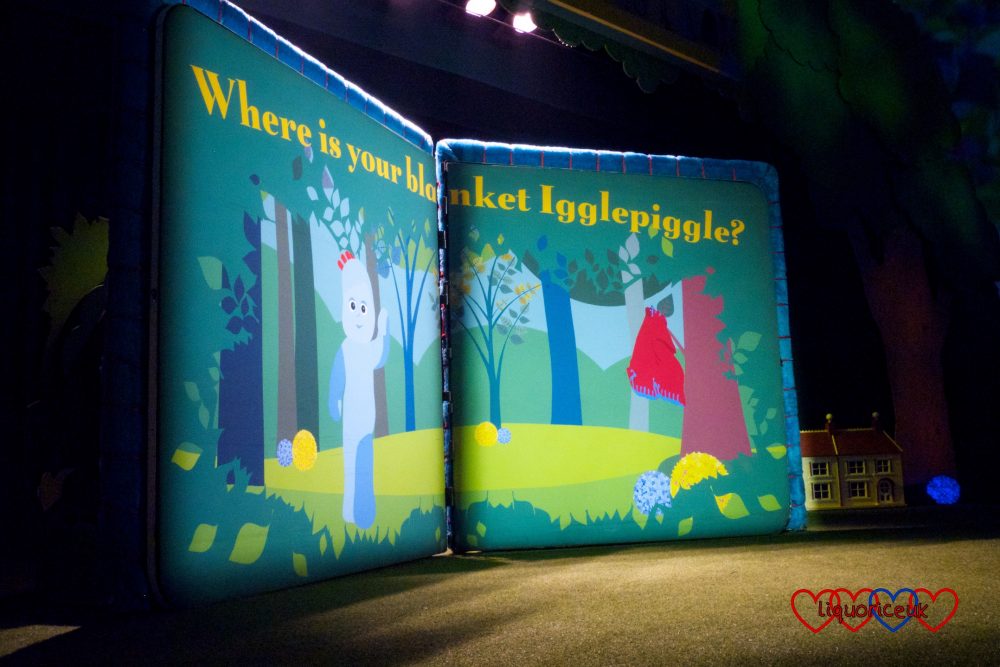 We had booked premium seats. Our seats were right in the front row. There was plenty of room for Jessica to wriggle and move about. There are two shows available – the Ninky Nonk show and the Pinky Ponk show. We had booked to see the Ninky Nonk show. This tells the story of how Igglepiggle lost his blanket and the little Pontipine children helped him to find it again. All the characters (with the exception of the Wottingers) featured in the story. Jessica got very excited every time they appeared on stage. There was a mixture of full-size costumed characters and smaller puppets, operated by four performers who were fabulous to watch. Their faces were so animated the whole time and their whole performance with the puppets and characters was slick and seamless. 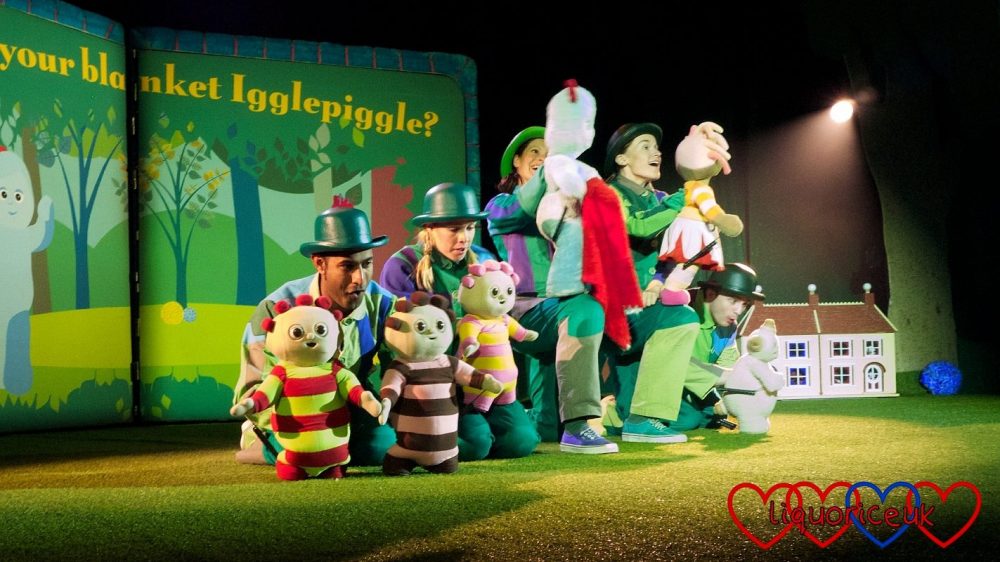 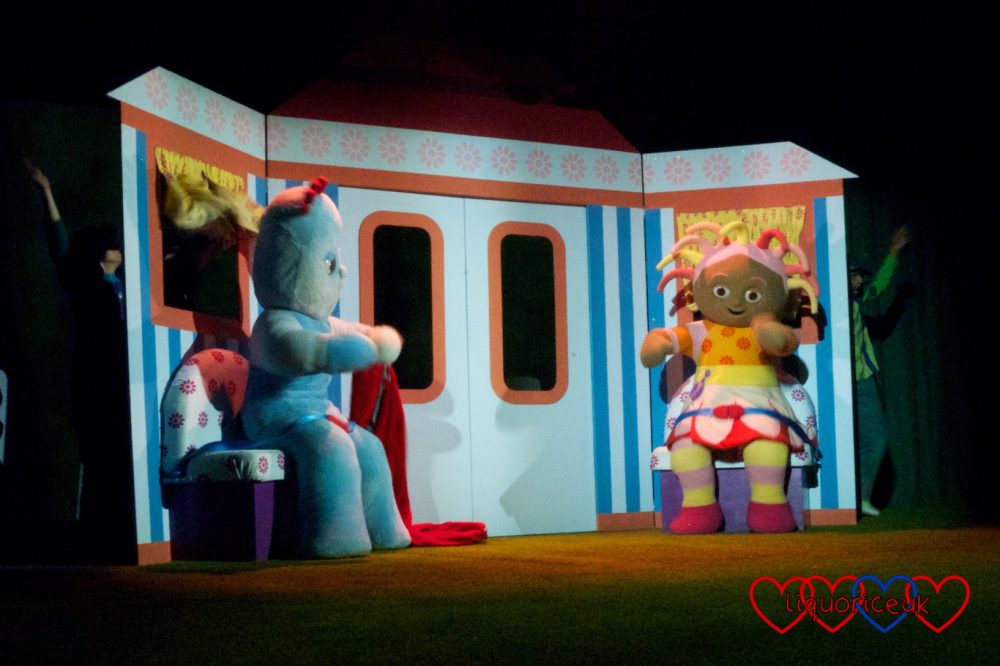 The show was very similar to each TV episode. The story was broken into segments with the Tittifers (projected on to the inside of the showdome) singing in between each segment. Each character’s performed their song twice with everyone encouraged to sing along on the repeat, which Jessica loved. She had brought a couple of her In The Night Garden cuddly toys with her. She held these up as the relevant character appeared on stage in front of her and waved them excitedly at the character. Jessica particularly liked the Ninky Nonk which came racing around the stage in front of us at various points in the story. 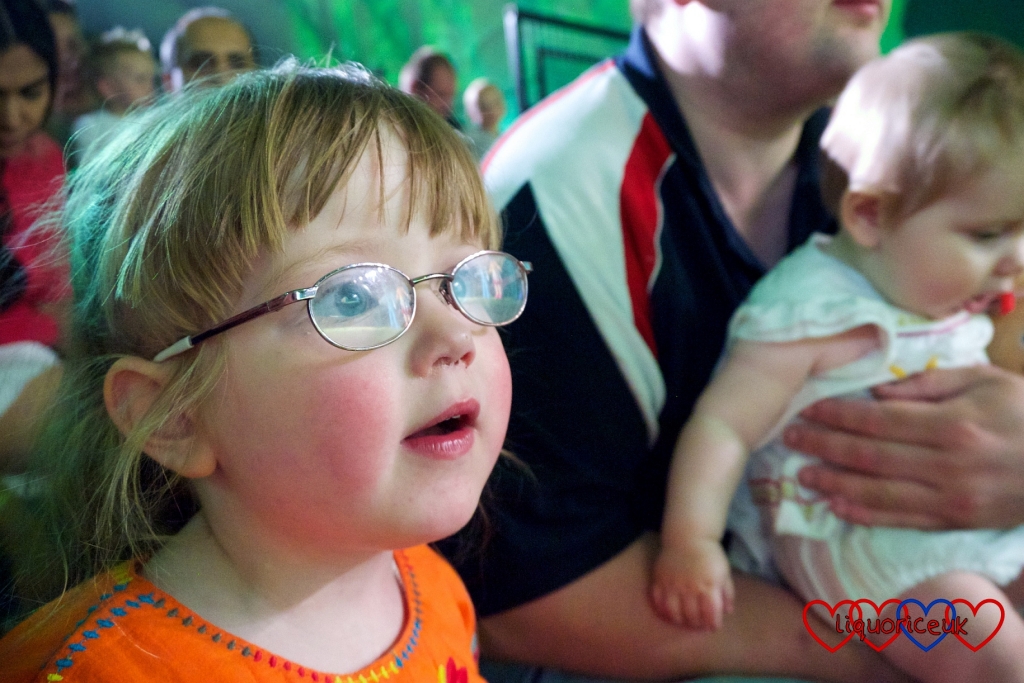 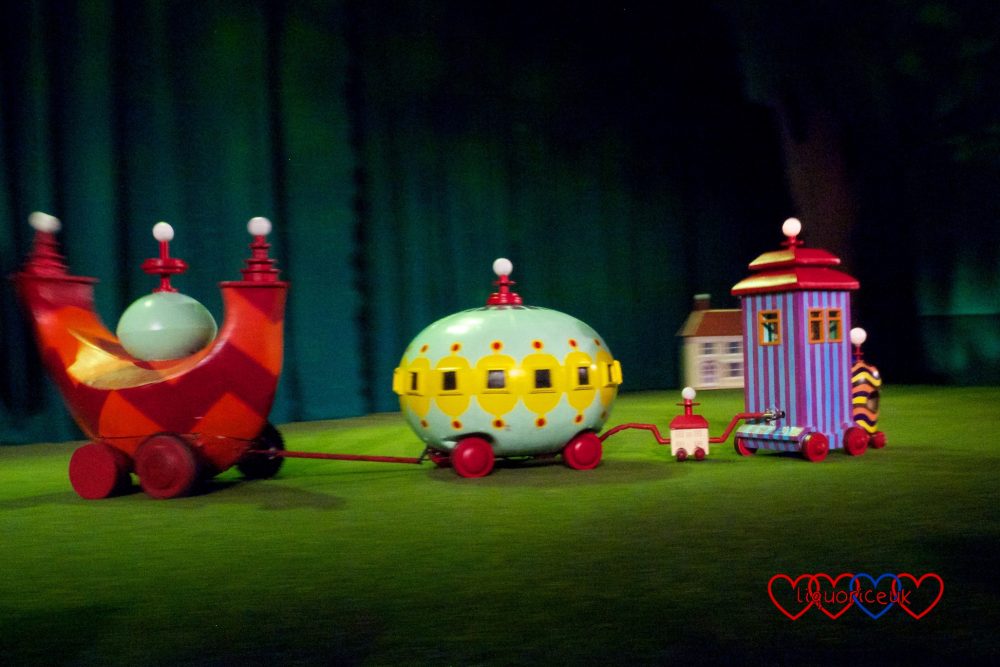 At the end of the story, all the characters appeared on stage to dance together before they all went to bed. The show finished with the familiar sequence of Igglepiggle not being asleep – “don’t worry Igglepiggle – it’s time to go!” It lasted about 45 minutes in total. Jessica was transfixed for the whole time – she loved it. Sophie too enjoyed watching the characters. She seemed to enjoy seeing what was happening on stage although she was probably a little young for it at eight months and was more interested in feeding as the show went on. 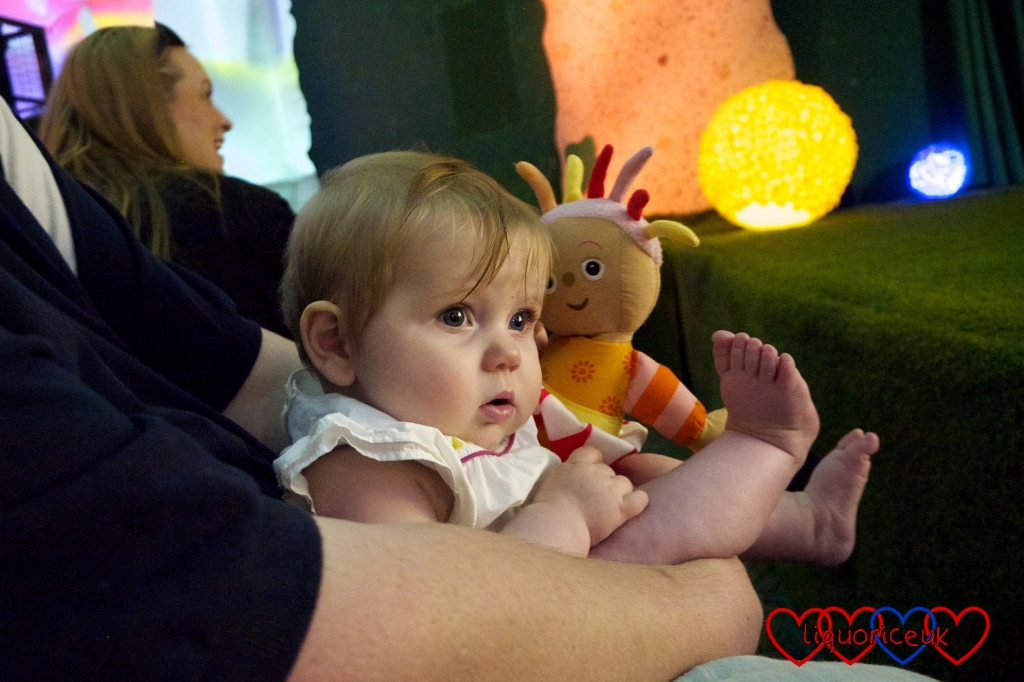 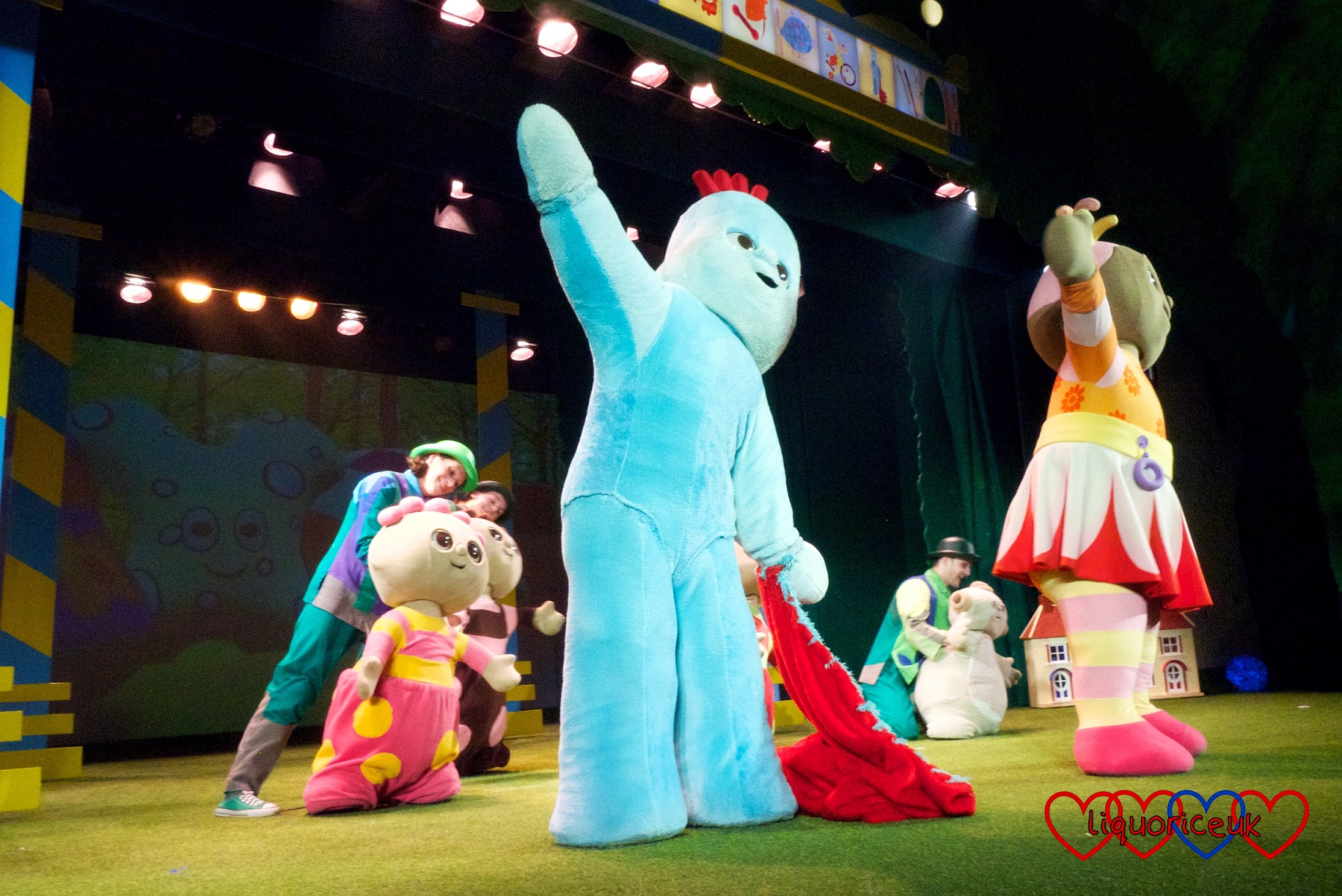 We had booked to meet Igglepiggle and Upsy Daisy after the show. Jessica loved being able to go and give them both a cuddle. We all had our photo taken (which was included in the cost of the ‘Meet a character’ ticket). There were balloons and various In the Night Garden toys, books, DVDs and T-shirts available which we mostly managed to resist (although did buy a bathtime toy which Jessica loved and a balloon). 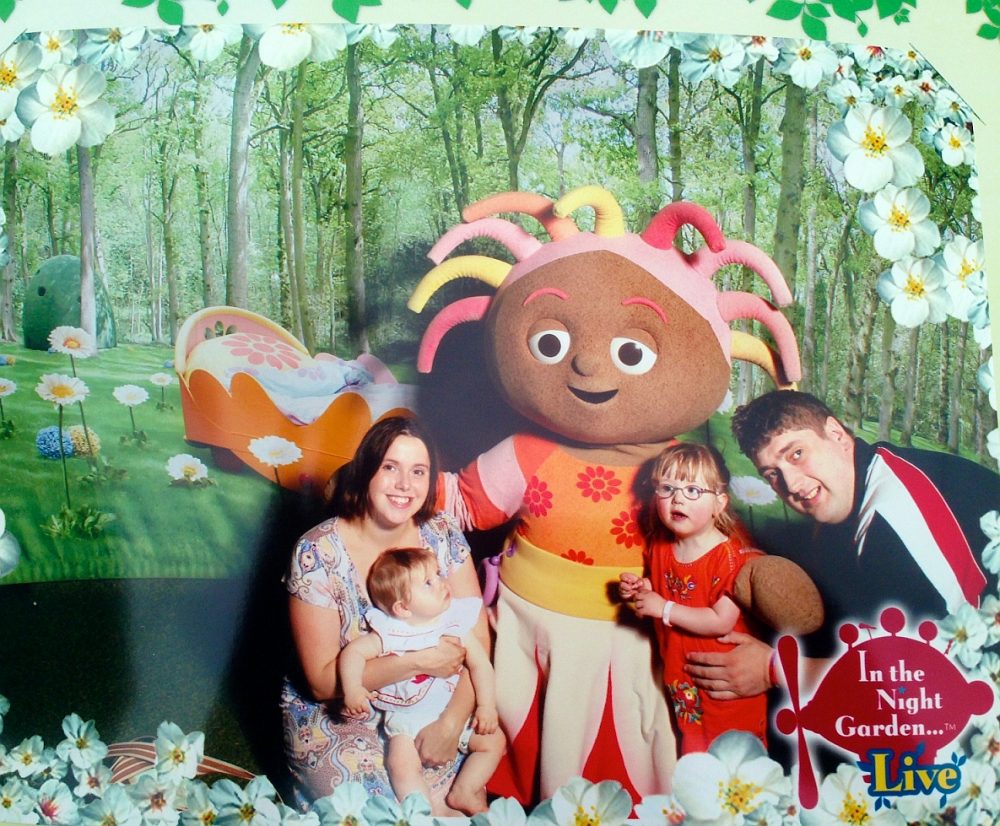 It wasn’t the cheapest day out. The premium seats cost £23 each (adult and children tickets were the same price). We also paid £30 for the two meet a character tickets (£15 each and valid for a group of up to five people). The show itself was magical though and both our girls seemed to really enjoy it. This was our second year going to see it. We would definitely recommend it to anyone whose children are In the Night Garden fans.

It was interesting to see the differences with Jessica this time having seen it the year before. This year we saw a different show (having seen the Pinky Ponk show previously). She was still just as excited about seeing the show live. Being a year older meant she was able to join in with the songs and verbalise her excitement though. She was less excited about meeting Igglepiggle and Upsy Daisy than she was last year though. A year ago, it was the most exciting thing ever as far as she was concerned. She just wanted to keep hugging them and got a bit tearful when we had to say goodbye. This time, she was happy to hug them and have her photo taken but happy to say goodbye too!

4 thoughts on “Review – In The Night Garden Live”