Despite being given directions at the hotel to the bus stop we still managed to completely miss it and had to ask someone else. It turned out we’d walked straight past it – how both hubby and I had managed to miss the bus shelter and the big yellow BUS STOP on the road when we’d passed the church (which we had noticed!) is beyond me! We were amused to spot the opticians opposite said bus stop, clearly we are both in need of one! Thankfully we had allowed plenty of time to reach the bus stop so didn’t miss our bus (which would have delayed us by two hours). 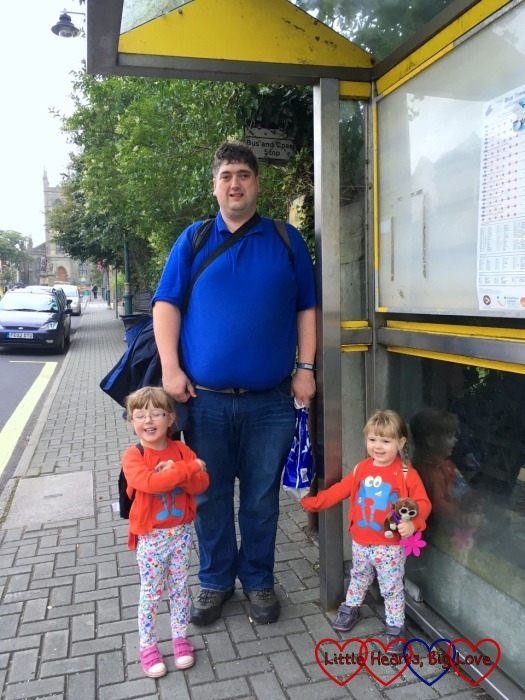 We were the only travellers on the bus for most of the journey – just one old man joining us for the last couple of miles. It was such a satisfying feeling to pull into the car park at John O’Groats and know we’d done it. We picked a good time of day to arrive too – it was fairly quiet which made it very easy to get out photo taken in front of the signpost before getting our log stamped at the First and Last Shop. 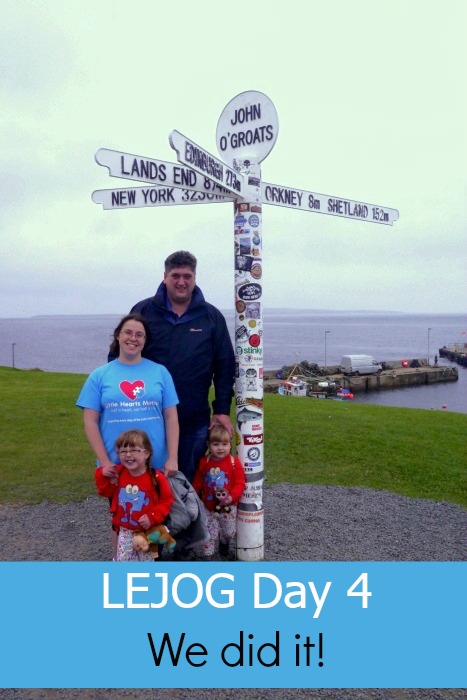 I have to confess I preferred our end point to our start point – it felt much less touristy and commercialised. We could have our photo taken standing right in front of the sign for free rather than having to pay £9.95 for it and while there were the expected gift shops, cafés and tourist information point, there weren’t any additional attractions like the one featuring Shaun the Sheep the girls had spotted at the other end!

We stopped for a coffee at the café and the girls had Funny Feet ice lollies which I don’t think I’ve seen since I was a little girl! I was still buzzing with the sense of achievement at us managing to complete the journey with our sanity still very much intact and couldn’t resist treating myself to the End to Ender T-shirt. 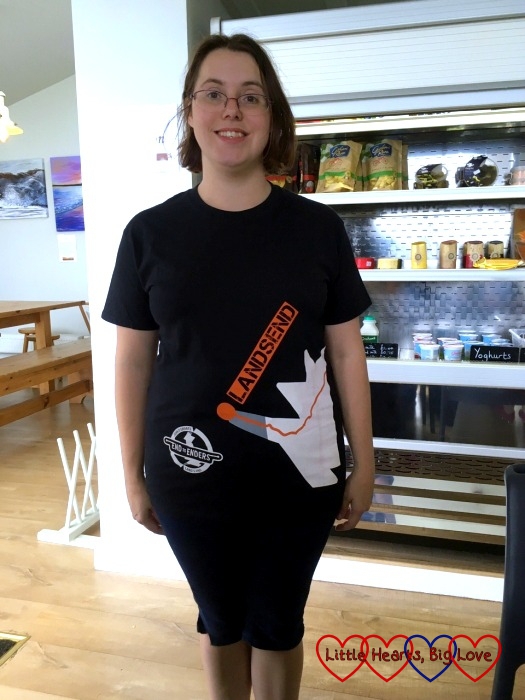 We said at the start that we weren’t sure if it would be fun or hellish doing this journey with two small children. They have both amazed us with just how well they have coped with the travelling and while there have been some challenging moments here and there (mostly when we were all tired), they have been few and far between. I can honestly say it has just been one wonderful adventure and I’m glad we decided to do it. 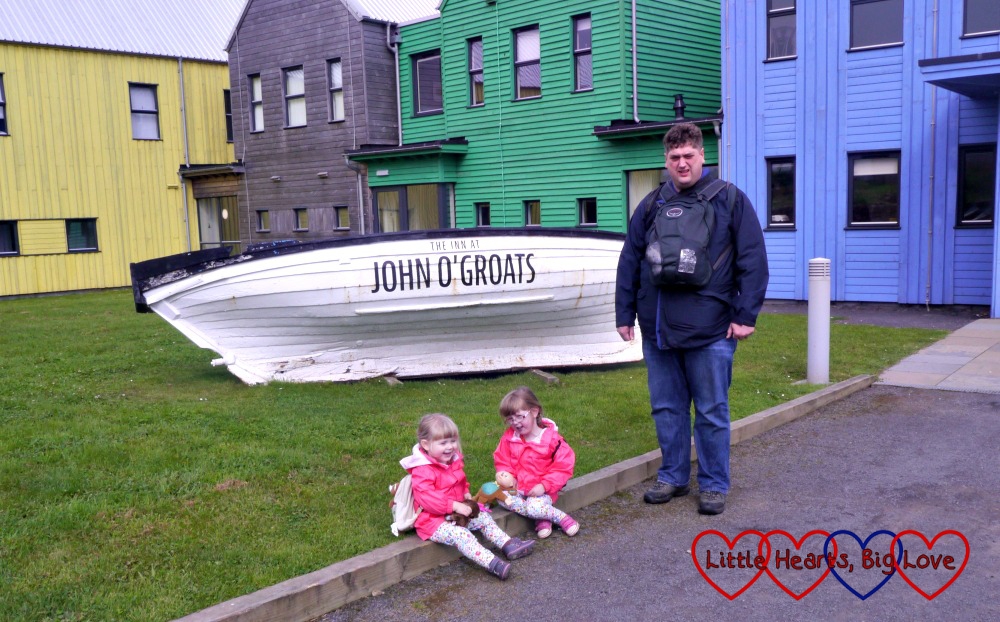 Getting a glimpse of the Orkneys from John O’Groats has given us a desire to come back here one day and take the ferry to visit them. Hubby has also (only half-jokingly) proposed trying to travel from Dover to north-west Scotland and do the other diagonal. Maybe that will be next year’s challenge!

Heading home, we took the bus to Wick where we had a couple of hours to wait before our train which were mostly spent in Morag’s Cafe which served amazing cake and milkshakes and had a little amusement arcade which helped keep Jessica and Sophie entertained. 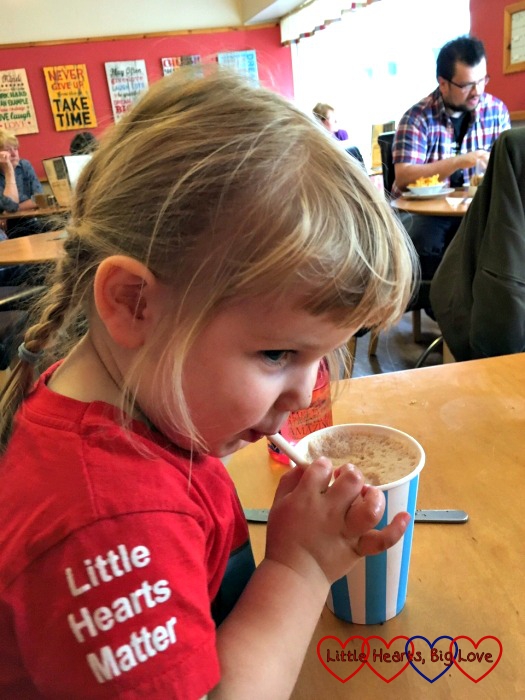 On the train back to Inverness, I got chatting to a fellow Lejogger who had cycled up over 24 days, camping along the way. It’s funny how doing a journey like this gives you that sense of connection to complete strangers who have done the same journey, even when it’s by a completely different method of travelling.

The girls enjoyed the journey home on the sleeper train and slept well (once we’d managed their disappointment over not being able to sleep on the top bunks!)  We arrived back at our local station almost exactly 96 hours from having left it.  As we got off the train, Jessica asked “how many sleeps until we go on the train again?” – she’s already looking forward to the next adventure! 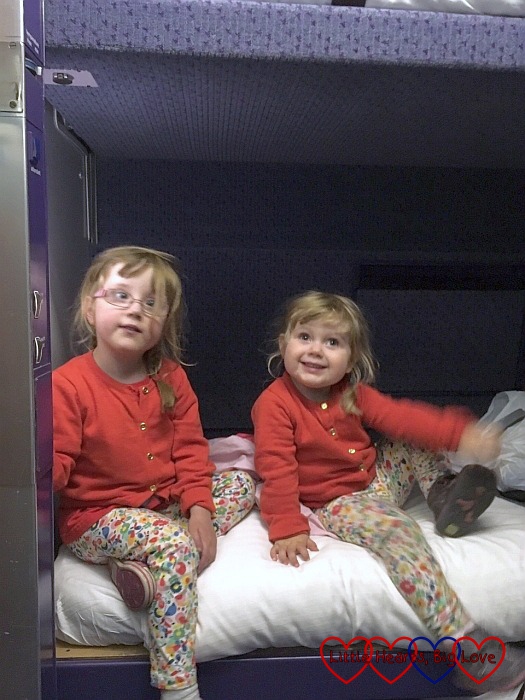 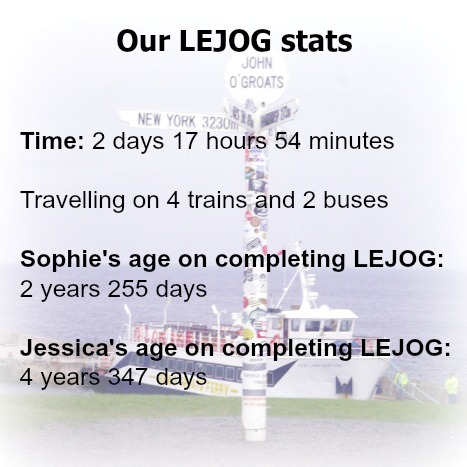 We did our LEJOG challenge in aid of Little Hearts Matter, a charity which supports children like Jessica who have half a working heart.  If you would like to find out more and/or sponsor us, please visit our fundraising page.