“We’re going on a ‘venture!” Sophie kept saying as we rushed around getting everything ready to set off towards Land’s End – the starting point for our LEJOG challenge. Unfortunately in the rush, neither hubby nor I noticed that Jessica hadn’t picked up Kerry, her favourite dolly, and it was only when we arrived at the station that we realised she was missing. No time to go back and get her though but it made for a slightly stressful start to the trip. 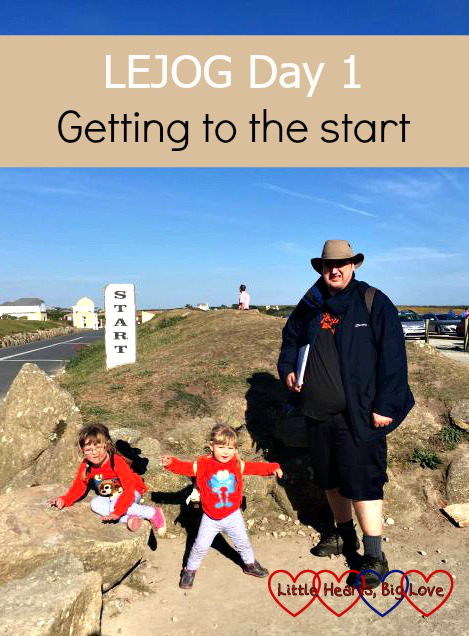 I’d packed the girls’ backpacks with little toys, books, crayons and stickers and it felt a bit like watching them open stockings on Christmas morning as they went through their backpacks on the train and discovered what was inside. 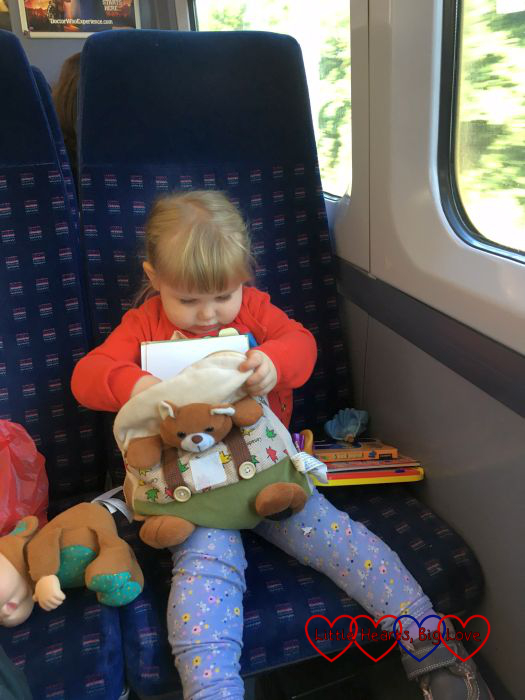 Our first train journey was a short one to Reading where we needed to change for the train to Penzance. Having allowed plenty of time to change meant we could stop for coffee and cake (and I managed to get a snuggly monkey in a card shop at the station which Jessica happily accepted as a substitute for Kerry).

Getting on the Penzance train was interesting! We’d booked seats but got on the wrong end of the carriage – and so had everyone else coming on from the other side by the look of it! My huge backpack meant I couldn’t squeeze past so there was a bit of trying to squash in where there was a table and wait for everyone to go past before we could locate our seats. We hadn’t managed to get a table on this journey – our seats were all in a row but the girls were quite happy to pull down the tray in front of them and get stuck in with their colouring. We managed to get as far as Newton Abbot before the inevitable request for iPads.

Once past Exeter, the scenery started to become much more interesting as the train made its way along the coast with gorgeous red cliffs on one side and nothing but sea on the other. We crossed the river Tamar on the Royal Albert Bridge designed by Isambard Kingdom Brunel (another beautiful view!) and entered Cornwall. 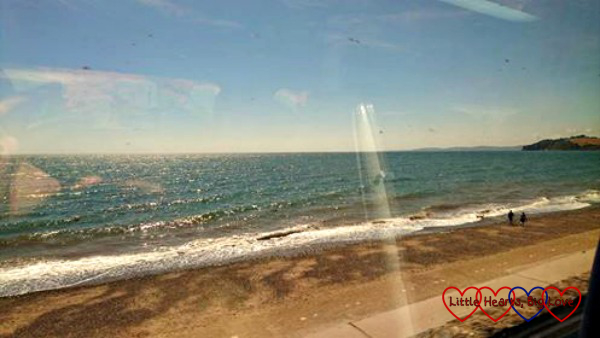 We hit a potential snag just outside of Par when we were stuck behind a broken down train in front for about half an hour meaning we were very late into Penzance, arriving just as our bus was due to leave. We rushed to the bus stop only to be told we’d just missed it. Lady Luck was on our side though – as we walked back to the station, we spotted the bus heading out and thankfully the driver very kindly let us on.

It was the girls’ first time on an open top bus. Jessica quite enjoyed looking at the scenery but I think she found it a bit too windy for her liking as we approached the coast and wanted to snuggle with Mummy. Sophie fell asleep within minutes of getting on the bus and slept all the way to Land’s End. 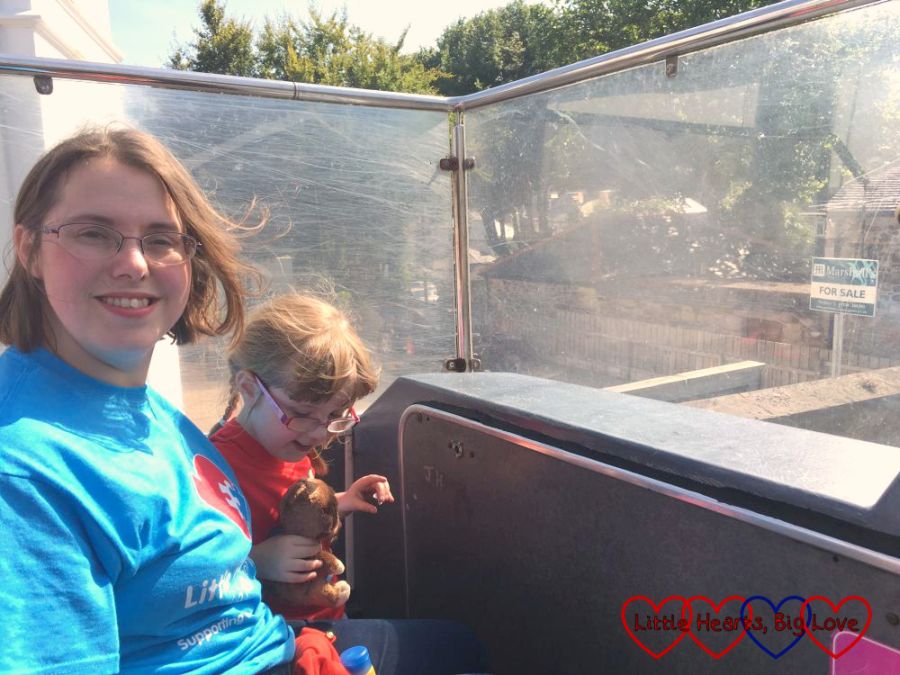 We finally made it to our starting point, signed the End to Enders book, got our log stamped in the Land’s End Hotel and had the obligatory photo in front of the sign. 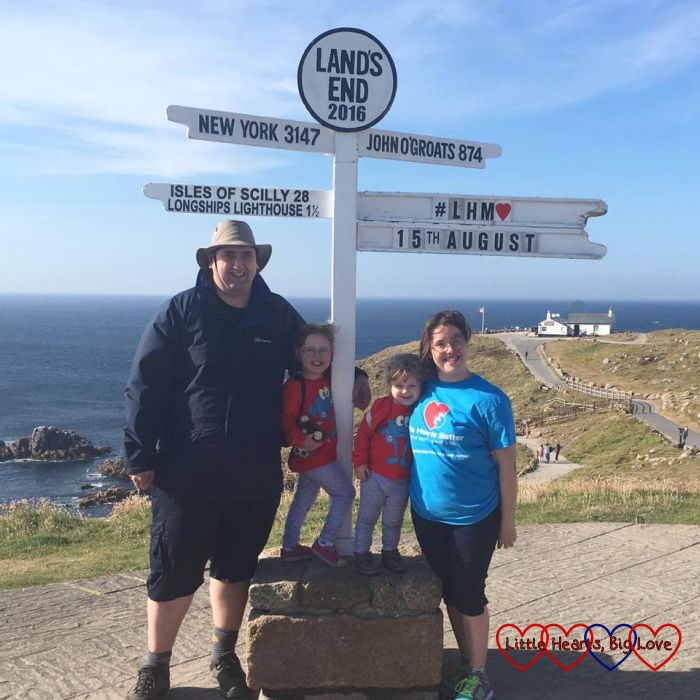 The bus back to Penzance took us via Porthcurno, the home of the Telegraph Museum, which we visited on our last trip to Land’s End. Travelling along narrow lanes in the bus was fun especially when we met a combine harvester coming the opposite way and the bus had to reverse until we got to a very tight passing place (and then we had to try and get past the queue of cars behind it!) 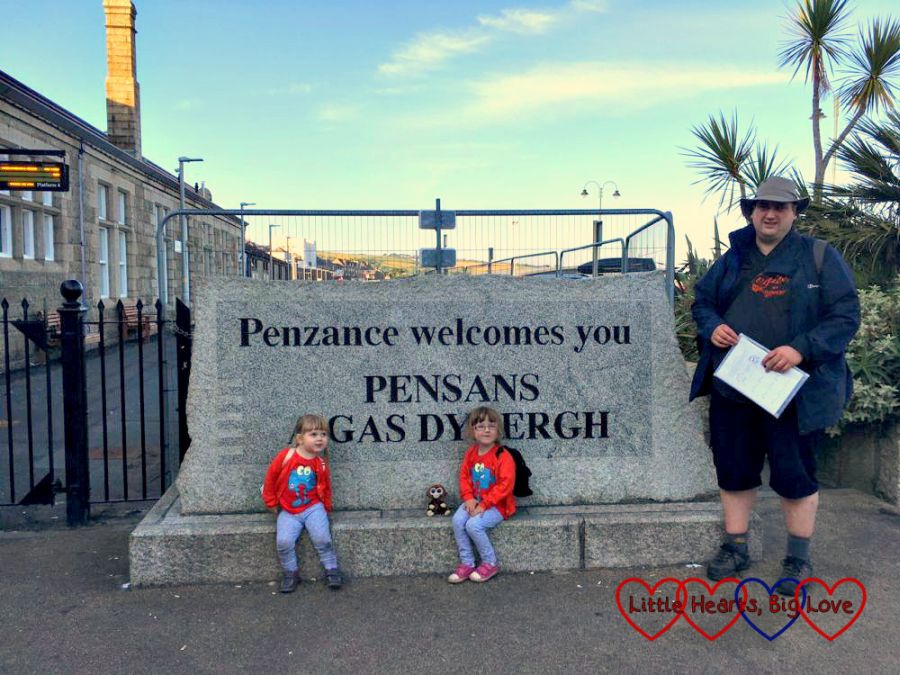 Tonight’s stay is at the Longboat Inn in Penzance which is opposite the station – very handy considering we need to get the train at 6.30am tomorrow!

We are doing our LEJOG challenge in aid of Little Hearts Matter, a charity which supports children like Jessica who have half a working heart.  If you would like to find out more and/or sponsor us on our challenge, please visit our fundraising page.