The girls have been counting down the days until Legoland opened again and so once more, the first day of the season found us back at our “favourite Legoland ever” (as Jessica and Sophie call it).  What I hadn’t realised beforehand was that this year is Legoland’s 20th anniversary year.  We were already excited just to be at the park again, and the celebratory atmosphere that greeted us on arrival made it even better.  There were little flags for the children to wave, cupcakes on arrival and a local youth brass band playing “Happy Birthday” (of course, we had to sing along!).  Jessica, in particular, was very excited about it being Legoland’s birthday. 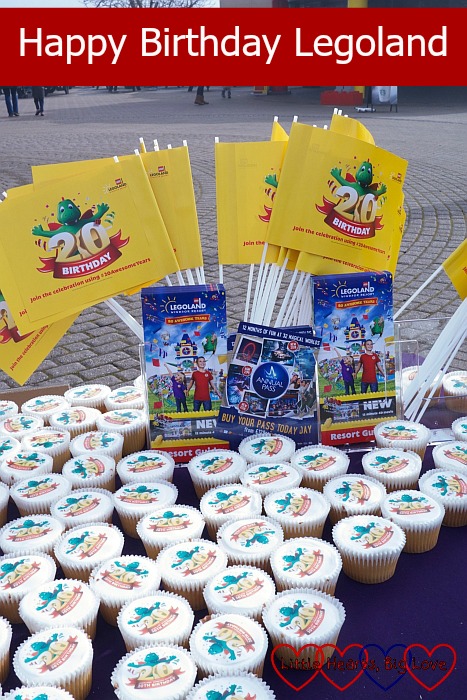 As usual, we took the Hill Train down into the park and made a beeline for the Kingdom of the Pharaohs for a ride on the Aero Nomad followed by the “spinny cup” on the Desert Chase carousel. 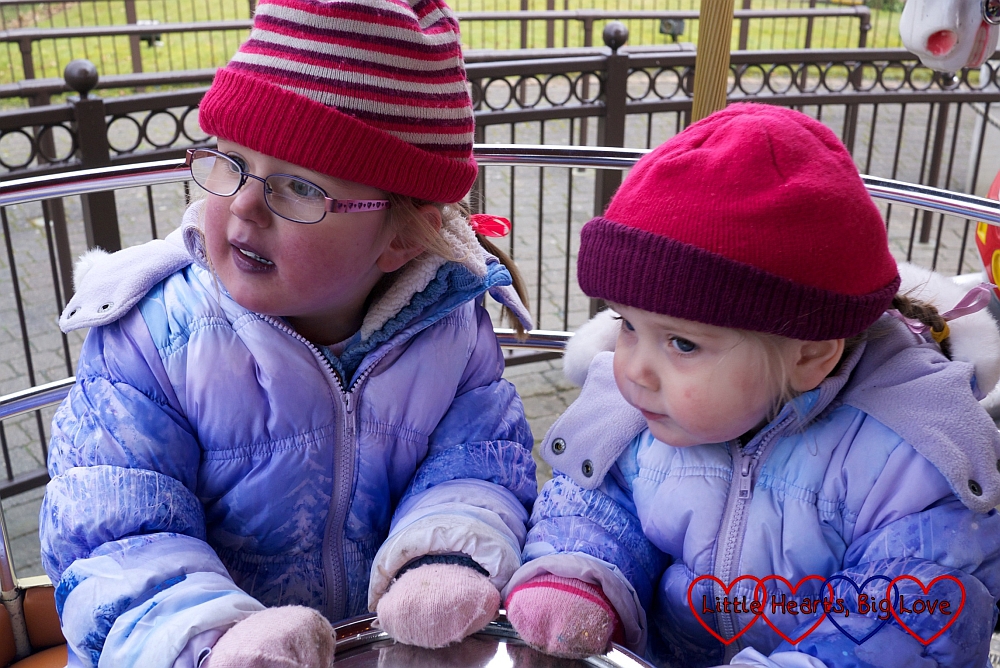 One of the things that Jessica was really looking forward to was seeing “the fairies” (otherwise known as Lego Friends) again.  She was quite disappointed when we got to Heartlake City and discovered that only the pirate show was being performed and the Lego Friends show won’t be back for a few weeks yet. 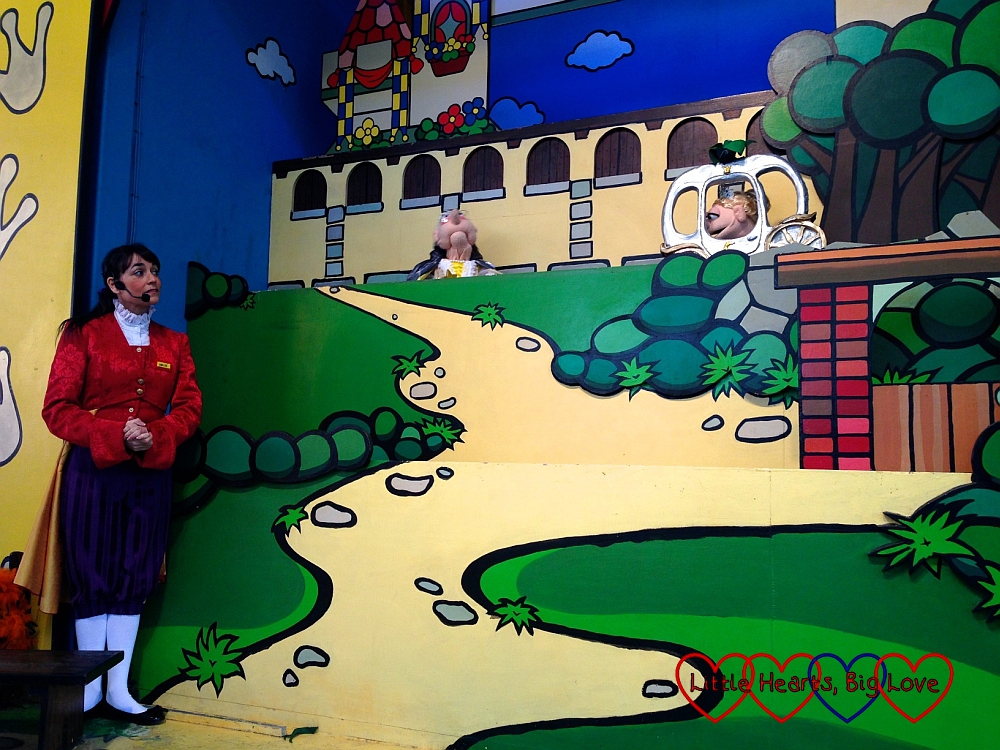 There was a new restaurant in Duplo Valley – Farmer Joe’s Chicken Company – and we stopped here to have some fried chicken for lunch.  The girls were quite taken by the giant Duplo farm animals (and the buttons which they could press to make the appropriate animal noise) but the best bit was the Duplo brick pit in the middle which meant they could play with the Duplo whilst having their lunch.  The food was a reasonable quality and about the price I’d expect to pay in a theme park (around £8 for a burger meal) – we’ll probably stick to bringing a picnic for the rest of the year though. 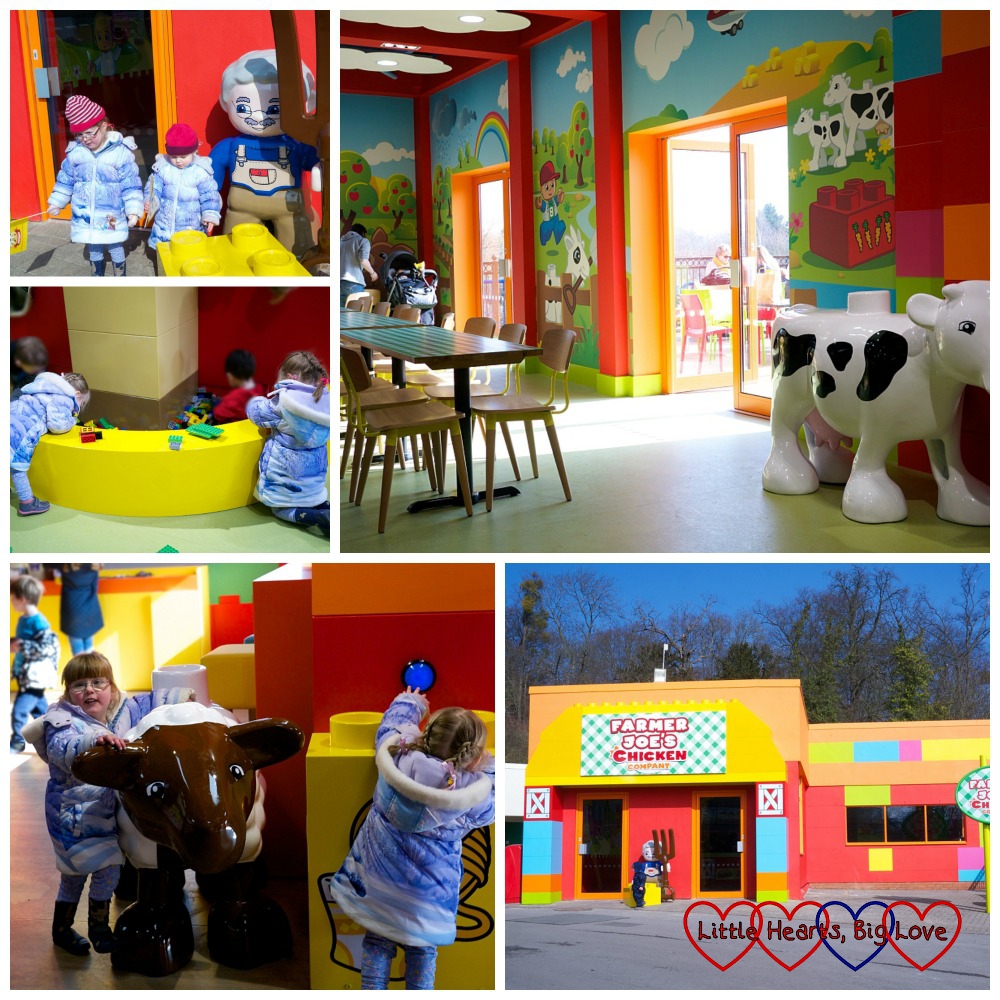 The Duplo Train was the ride of the day as far as the girls were concerned – they wanted to go on it over and over again and Jessica was very keen to be the train driver whenever she could! Sophie is still too little to sit in the front carriage though and drive the train which she was a little disappointed about – once the train started though, she soon cheered up again. 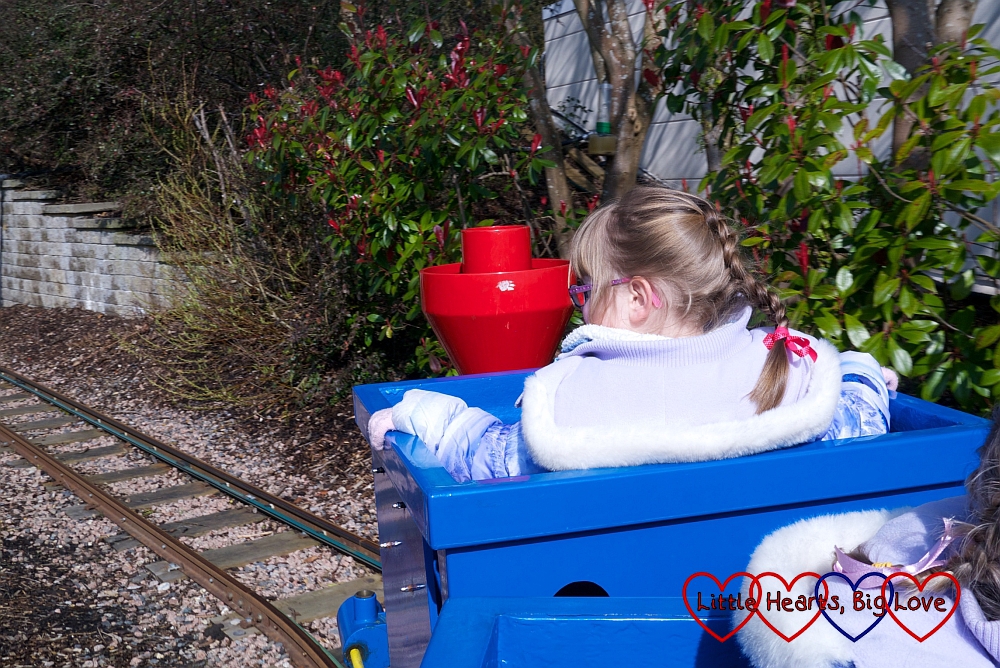 We spent a lot of time in Miniland – watching the trains going round, racing the dragsters at the racetrack and just generally wandering around, looking at all the Lego models.  Although the day had started off foggy, the sun had come out shortly after our arrival, and stayed out for the whole day. The spring flowers were out, the sun was warm and it was just a beautiful day to be outdoors. 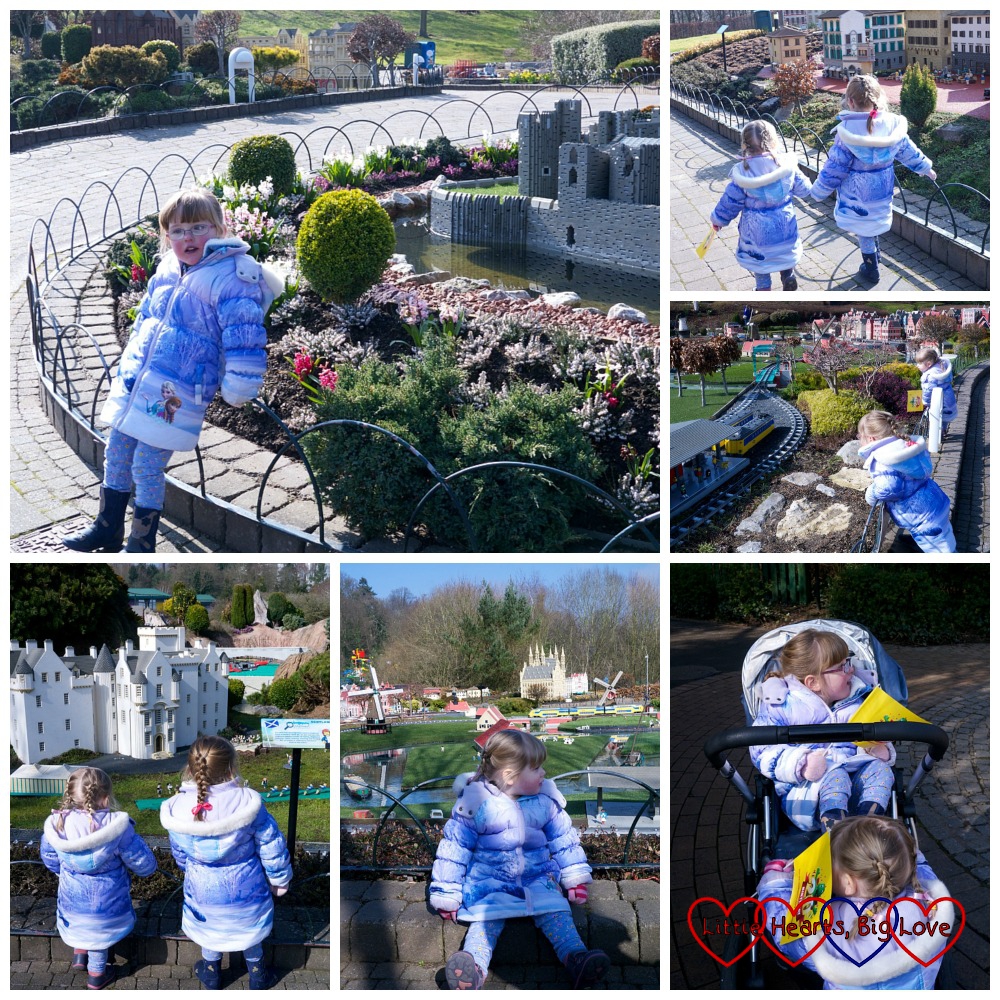 Despite spending the whole day at Legoland we didn’t go on many rides.  Jessica’s list of rides that are “scary” seems to be ever-increasing, and with Sophie unable to go on some of the rides that Jessica enjoys due to height restrictions, there are only a handful of rides left on the list.  We took a trip in a balloon at Balloon School but that was the only other ride we went on – the rest of the time, the girls were both content to explore.  I was glad I’d brought the buggy with me – whilst Sophie was happy to walk; Jessica had moments of getting tired and a little breathless. 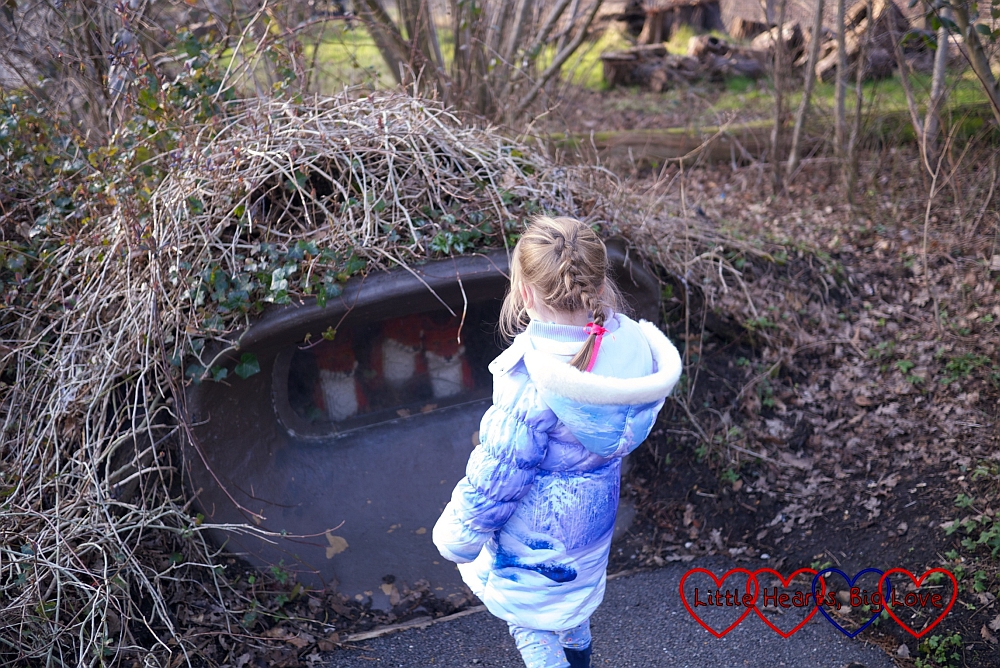 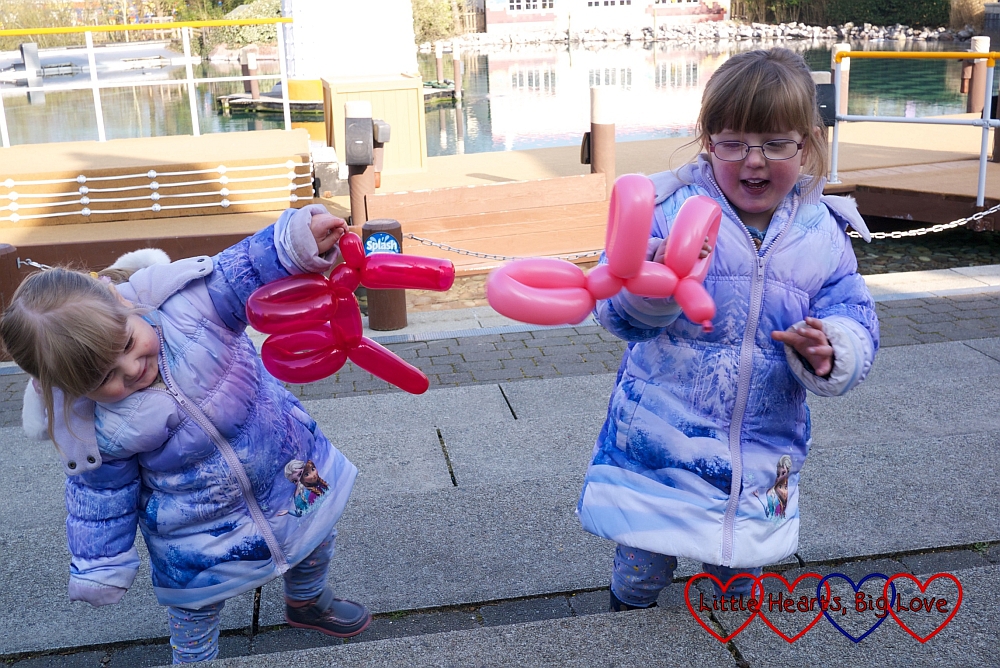 It was good to be back again and the girls both had a lovely day (in spite of the small disappointment over the lack of Lego Friends show).  With Jessica due to start school in September, I’m intending to make the most of the preschool pass once again this year and enjoy days out during term-time while we still can. 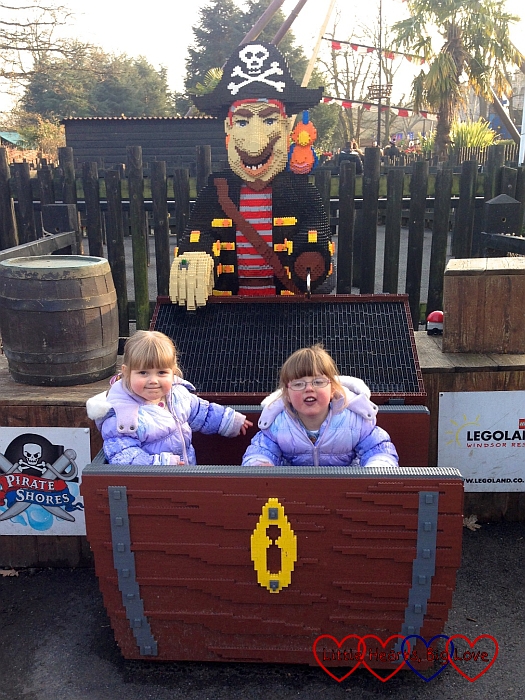