From the mouths of babes is my monthly post capturing some of the things my children say. It originally started as a weekly linky but as this gradually fizzled out, I stopped recording those little sayings and found I missed it. One of the things that I love about my blog is that it has captured so many little moments that I might otherwise have forgotten about. This little round-up is my way of capturing some more of them. 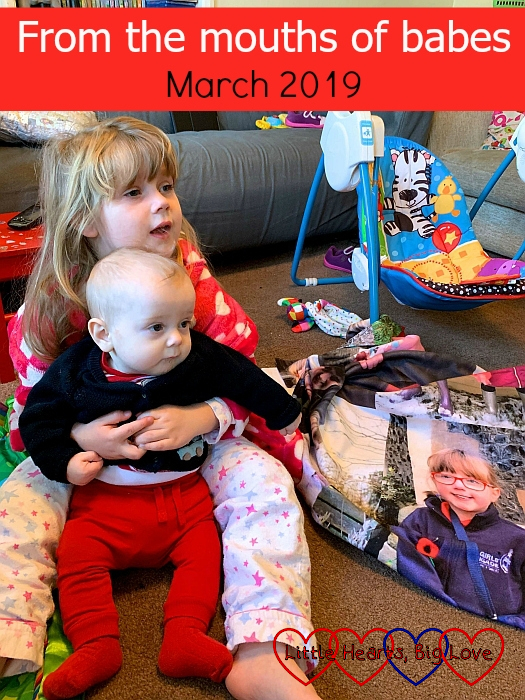 “Jessica died. But we didn’t die. We stayed undead.”

Me: “Sophie, please don’t turn on the light [in the back of the car]. It makes it harder to see out of the windscreen.”

S: “Don’t worry, Mummy. You just concentrate on driving. I’ll let you know if you’re going to bump into anything.”

“Are you going to put Thomas in his growing bib?” (She meant babygro!)

[While reading a book about fish] “That’s the fin. It’s fin, not thick.” I’m still not sure I’ve managed to get her to grasp that ‘thin’ and ‘fin’ are two very different things!

Thomas is getting very chatty which is lovely! It’s mostly “ba-ba” sounds or “hi-ya-ya” but he occasionally says “um-mum” which is lovely – not that it seems to be particularly directed at me! The girls both said “mum” before “da” too!

I used to record the little milestones and memories of the girls’ early years using an app on my phone called Tweekaboo. This app is now being discontinued and I’ve downloaded the data on to my computer to save it there. It was lovely to look back over some of the memories I captured – one of which was this little video of a very small Jessica playing peek-a-boo with her reflection.