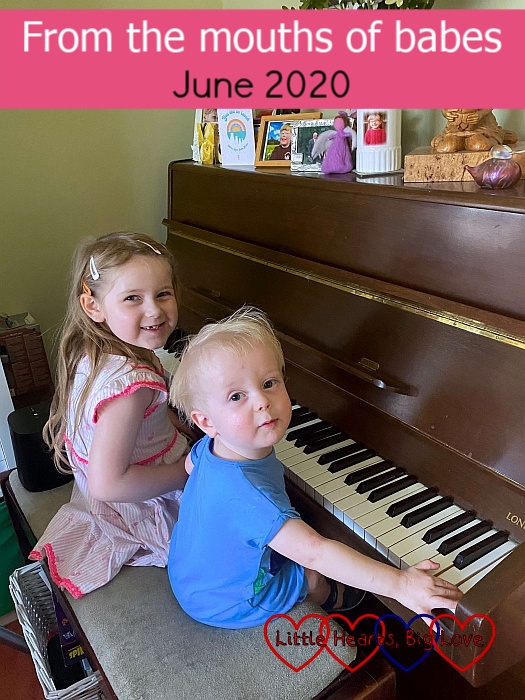 Sophie has been talking more about Jessica recently. Not being able to be with her friends at the moment means she feels the absence of her sister and the loss of a playmate more. She’s also now at an age where she’s questioning more. Some questions are impossible to answer, such as this one:

“Why did God make Jessica with a poorly heart which made her die? That wasn’t very kind, because now I only have Thomas who is a baby and can’t play with me.”

The only answer I have to that is that I don’t know why, and to admit that I’ve asked the same question myself.  And to say that it’s okay to have questions that you’ll never know the answer to, and it’s okay to feel sad about that. [And by the way, I’m not looking for answers like “well maybe God needed a special angel like Jessica” which quite frankly is not remotely comforting and is easy to say if it wasn’t your angel that God needed.]

Last week, Sophie overtook Jessica in age. It wasn’t an easy milestone for us, but Sophie quite cheerfully announced that morning. “Mummy, I’m now the big sister. I’m the biggest now because I’m older than Jessica and I’m the big, big sister and Jessica is the little one.”

What can you say to that, other than to just give her a hug and say, “yes, Sophie, you are.” I try so hard not to let my sorrow at having to live without Jessica take away anything from Sophie but it is a fine line to tread at times.

She does come out with some funny things at times though, like this gem from the other day:

Thomas is very chatty now and his vocabulary seems to have exploded in recent weeks. I love his little toddler mispronunciations. These are some of my favourites:

Nanni = Banana (and occasionally Nanny which isn’t confusing at all!)

He loves to count and can count up to twelve in English and ten in French. He gets very excited when he spots numbers which reminds me so much of Jessica. Some of his little expressions are very similar to the things she would say as a toddler and she had a similar love of numbers. He particularly loves putting the number turtles together which was a favourite thing of hers too. I love listening to him when he’s doing things like that as he keeps up a constant stream of chatter:

“Where two gone? Oh no! There two. Bye-bye two. Where three gone?” etc.

His latest expression is “not again!” which seems to get used when Sophie has her ballet class, or a particular programme comes on CBeebies (his favourites are Hey Duggee and Numberblocks). I’m not entirely sure where it came from – I don’t think it’s something we say regularly but maybe we do and just don’t realise it!

He loves to sing away to himself too, and favourites at the moment are “Old Macdonald”, “Row, Row, Row Your Boat” and “The Wheels on the Bus”.

Seeing Thomas with his number turtles always makes me think of this moment with Jessica. I’ve shared this clip a few times before but it’s one of my favourite ones of her as a toddler.