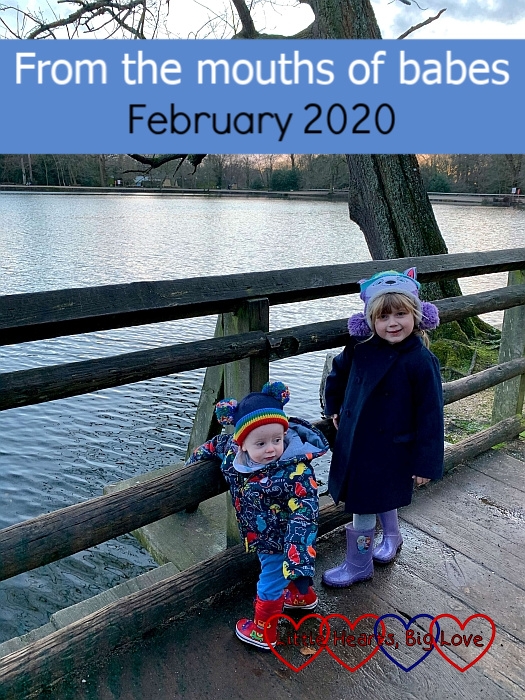 Sophie has been talking recently about what she wants to be when she grows up. At the moment, it changes quite frequently. So far, she’s wanted to be a unicorn, a tooth fairy and, my personal favourite, a ‘ballerina baker’. Which is, as she explained to me, “someone who bakes while doing ballet dancing.” Obviously. I can just imagine the result of pirouetting while simultaneously trying to mix a cake. I wonder what the next dream job will be.

We were talking about how animals have fur to keep them warm, while people wear clothes. This prompted Sophie to observe that “Daddy has hair on his body because Daddy is a furry man.”

I often say that Sophie is a born performer and she certainly likes a bit of dramatic effect here and there. She made me giggle when opening her stocking on Christmas morning with the following:

Daddy was showing Sophie how we drive the car the other day, pointing out the steering wheel, gear stick and pedals. The next day, when I was driving Sophie to her dance class, I heard a little voice from the back of the car saying, “you’re driving very well today, Mummy!”

Interestingly he’s the only one of my three children to say “mama”. With the girls, it was a definite “mum-mum” sound.

We went to see Wind in the Willows on stage last weekend. Since then I’ve heard Thomas come out with an occasional “poop-poop!” when playing with cars.

My favourite moment though was when we were at Coombe Mill. He walked into the single room where Jessica’s photo blanket was spread out on the bed, laid his head on it and said “aahh, Jess-sha!” I thought it might have been pure coincidence that he put those particular sounds together but later on he said it again in that room (and I managed to capture it on video) and he sometimes points to photos of Jessica and says it.

I took a couple of videos of Jessica sharing her thoughts on things during her last summer. In this one, she’s sharing her thoughts on Mummies and how they look after you. Up until a year ago, we had a family bedroom with the children’s beds being in our room. Jessica did have her own room at one point, but would end up in our bed every night and in the end we decided to move her bed into our room (along with Sophie’s cot which was already there) to help encourage her to sleep in her own bed, while still giving her the comfort of being near us. We were going to move the girls into their own room before Thomas was born but hadn’t yet done so when Jessica died.

A family bedroom might have been unconventional, but this video reinforces my belief that it was the right move for us. It clearly gave Jessica comfort to sleep with us close by, and it is a small amount of comfort to me to know that we were always close by at night, and in her last moments, she was snuggled up with us in our bed where she felt safe and loved. Sophie and Thomas now have their own room, but Jessica’s bed is still in our room. We still often co-sleep with Sophie and Thomas, but when it gets to be a bit of a squash, Sophie will often go and sleep in Jessica’s bed just so she can still be near us.