I often use the “Where Can We Go” app on my phone to find local events and places to visit.  We’ve been to a couple of places as a result of using it that we probably wouldn’t have otherwise visited. Bagot’s Castle was one of those places. We were staying in the nearby area over the August bank holiday weekend and noticed that there was a children’s trail there. 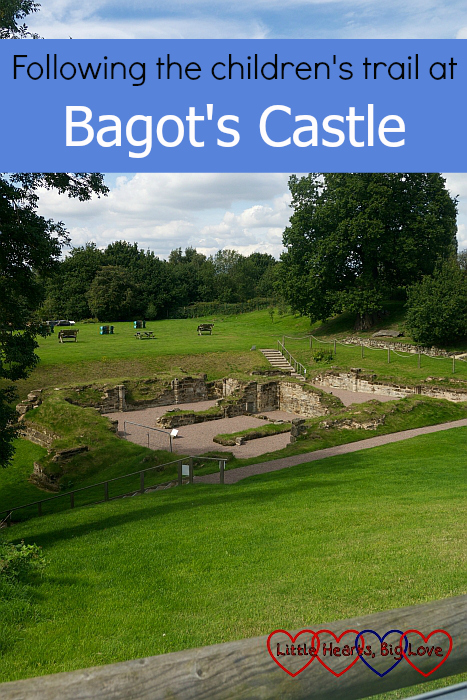 Bagot’s Castle is a ruined castle in Baginton, near Coventry. The original castle is thought to have been built in the 11th century and then rebuilt in the late 14th century by Sir William Bagot. Sir William Bagot was a favourite of Richard II and is one of the characters in Shakespeare’s play Richard II. He was imprisoned for a year after Henry IV seized the throne. After Sir William was released, he returned to his castle, living a quiet life until his death in 1407.

We picked up our children’s trail sheets at the Visitor Centre for 50p each. The trail involved looking out for boards with letters on. Each of the trail boards also gave some information about the history of the castle. Once we’d found all of the letters, we needed to unscramble them to solve the puzzle. We found our first letter at the top of the path leading down towards the castle. 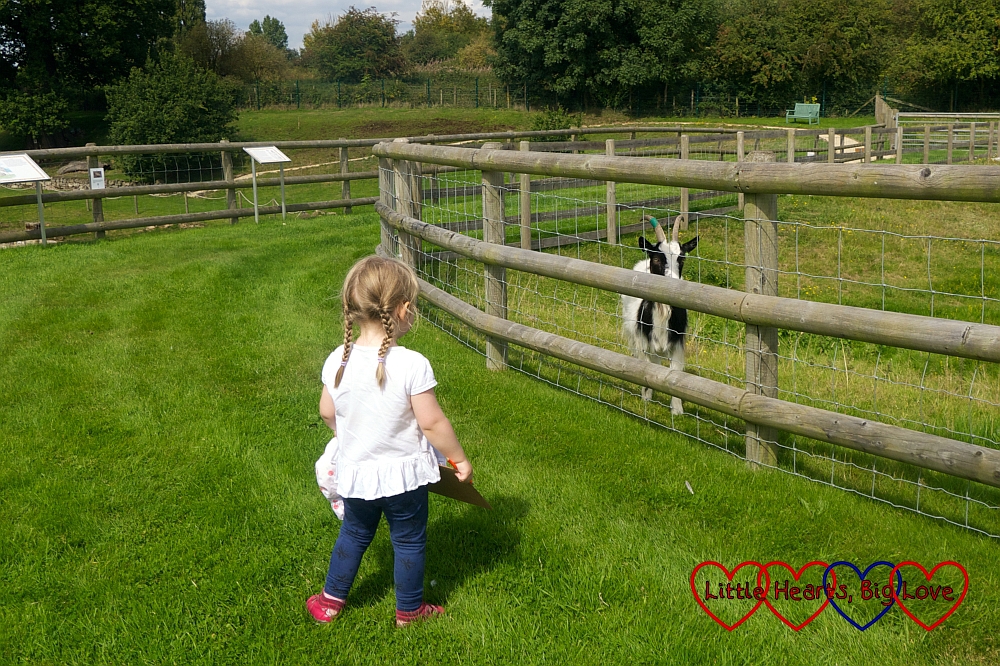 We made our way down towards the ruins of the castle, stopping along the way to say hello to the goats and sheep. The three goats are Bagot goats, a rare breed named after Sir William Bagot and the three sheep are Herdwick sheep. 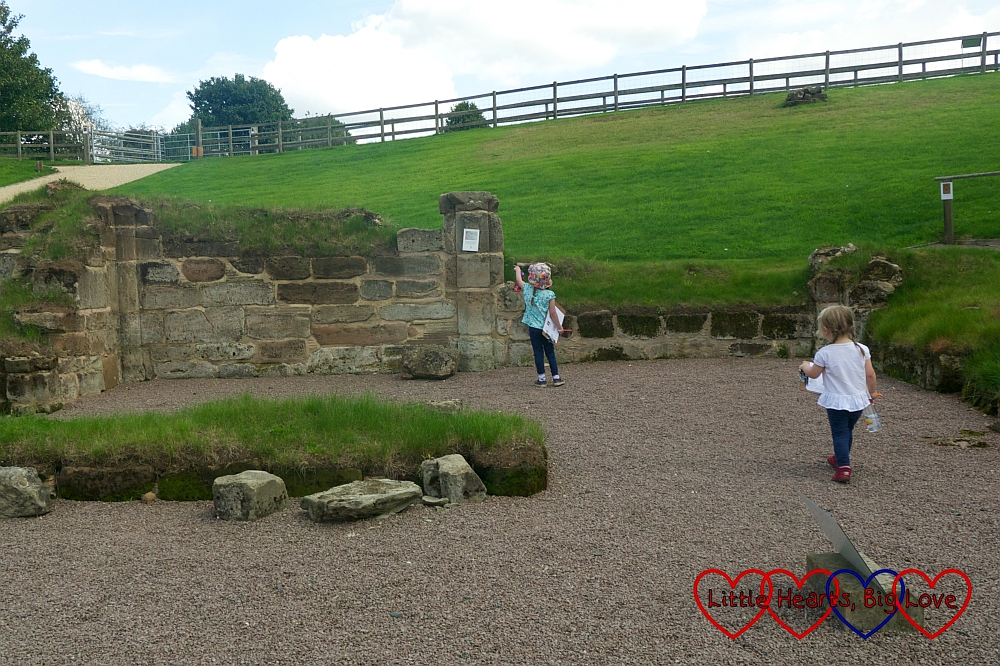 There were a few clues to be found around the castle site. Very little of the castle still stands, although the ruins give you an idea of what the layout of the castle would have been. Sophie quite enjoyed going through the very small doorway she found in one of the walls! 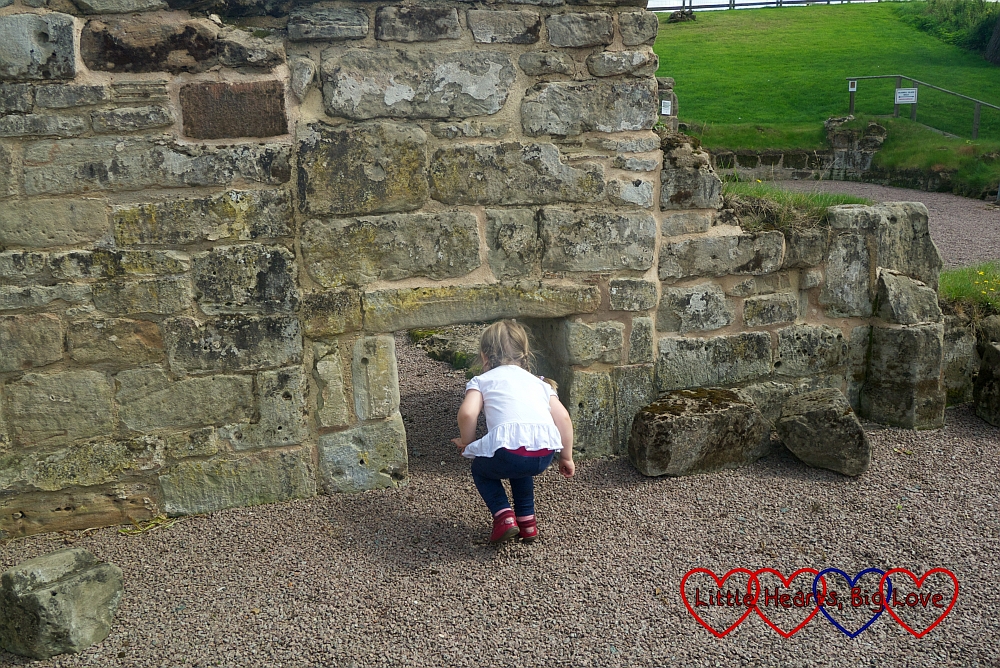 Once we’d found the clues at the castle, we followed the trail to take in the woodland walk alongside the river. It was a lovely day for a walk and Jessica enjoyed riding on Daddy’s shoulders when she got tired. Ruined castles tend not to be very accessible with the buggy so we’d left it behind. It would have been tricky to navigate parts of the walk if we’d had it with us. 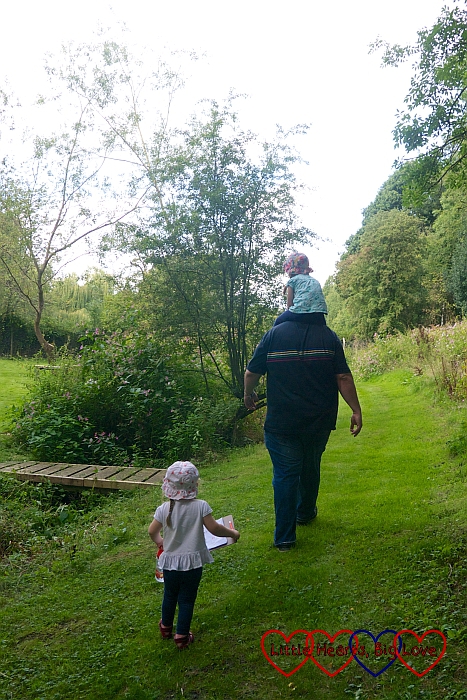 Part of the site was used as a tank testing area during World War II. The girls loved the water splash area (which was quite dry on our visit!) and had fun rolling stones down the slopes and seeing whose stone would travel the furthest. Simple childhood fun at its best! 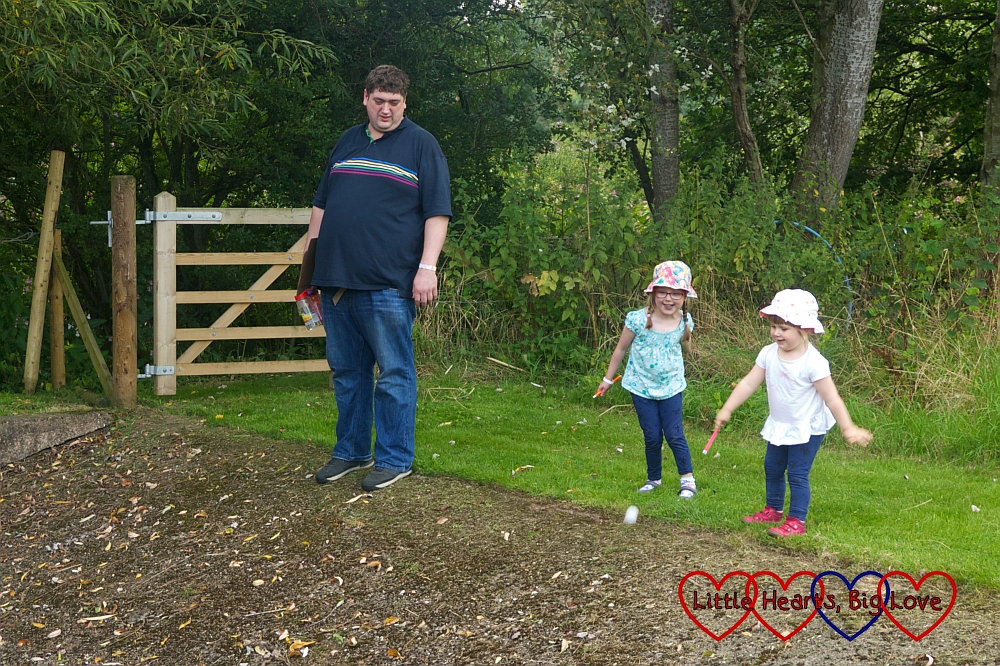 The walk also took us around two ornamental ponds. The pond surface was covered in green algae. Sophie didn’t believe that it was water and not grass until I stirred the surface with a stick to show her. Needless to say, we kept a very tight hold on her and Jessica’s hands around this part of the walk! They are generally very good at not going near water. However, when it looks like a nice green carpet, it would be easy for them not to realise it’s there! 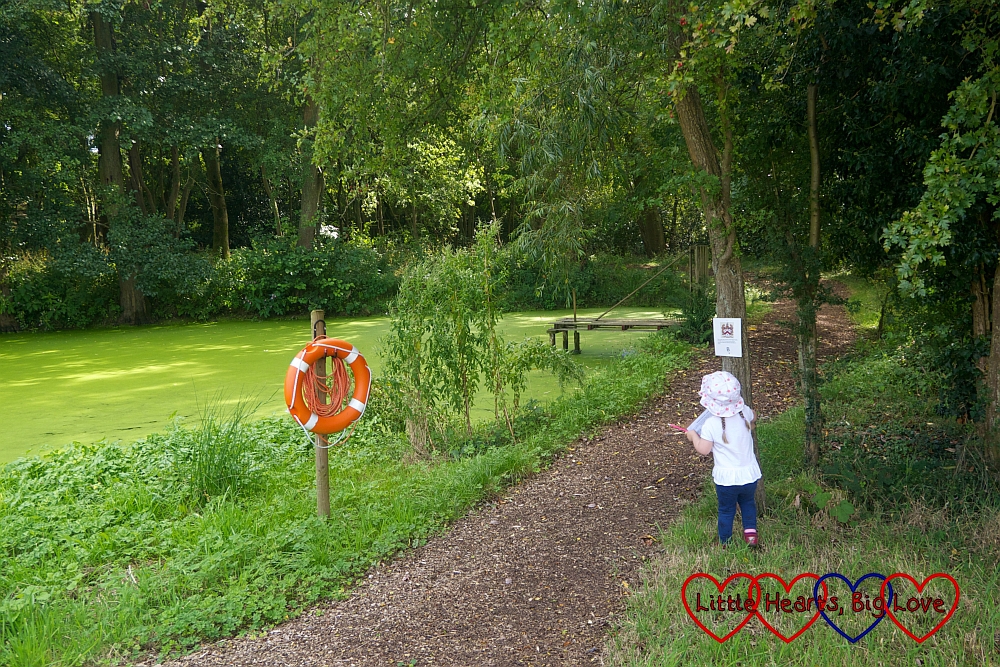 We must have missed a couple of boards as we didn’t have all the letters on our return to the visitor centre. The puzzle was easy enough to guess at though. Jessica and Sophie enjoyed the sweets that they received as a reward for doing the trail. 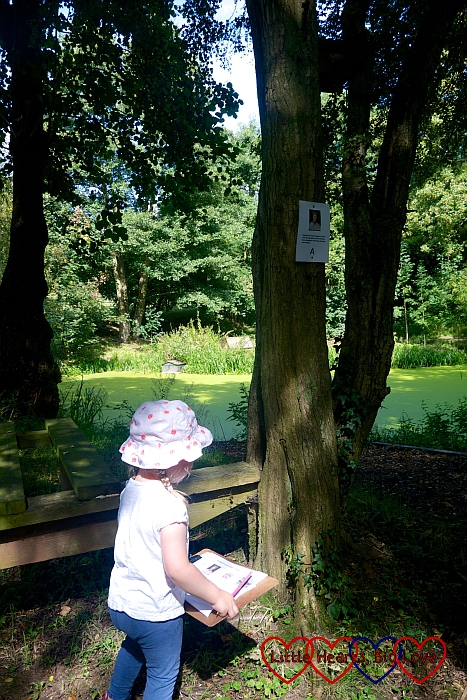 Bagot’s Castle didn’t seem to be a very popular place for a day out though. We went on a sunny Saturday afternoon in August and I think we were the only people on site other than the volunteers working there during our visit. Although there isn’t a lot to do and see at the castle, the walk around the site is lovely. We thoroughly enjoyed the couple of hours we spent there.

Visiting Bagot’s Castle – what you need to know:

All other times: by appointment