Last year’s festive day out enjoying A Winter’s Tail at Chessington World of Adventures was a special one for us. It was our last family day out before Jessica’s Fontan procedure and it was such a magical one for our girls. They loved meeting Father Christmas and Jessica particularly loved the Gruffalo notebook gift she chose. She spent the next morning rewriting the story of the Gruffalo from memory (complete with illustrations) before going on to add the Gruffalo’s Child, Room on the Broom and The Highway Rat later on. That book is now a treasured possession of ours as it captures so much of Jessica’s personality.

Returning to Chessington for a festive family day out this year was always going to be emotional. We knew that Sophie would enjoy it though and that the memories would bring smiles as well as tears. 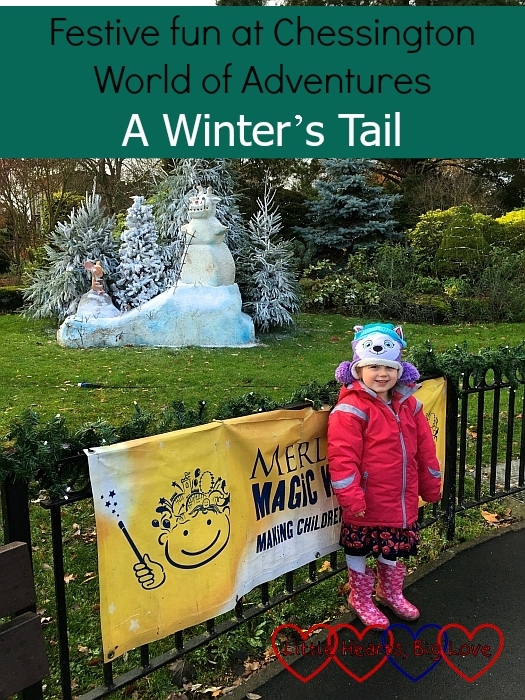 As usual, the Gruffalo River Ride Adventure was our first port of call. One of the things I really love about A Winter’s Tail is how much quieter it is which means much less queuing! There were only a few rides open but queuing time was less than five minutes for most of them throughout the day.

Sophie always enjoys the boat ride through the deep dark wood, encountering Fox, Owl and Snake before meeting the Gruffalo. She likes to make sure that we’re all ready for the photo too. We have a lot of photos from this ride now as I had an annual Digipass this year. Unfortunately it wasn’t valid this time though as it is an out of season event. I did buy the photo as a fridge magnet though to add to the collection of similar photos on our fridge! 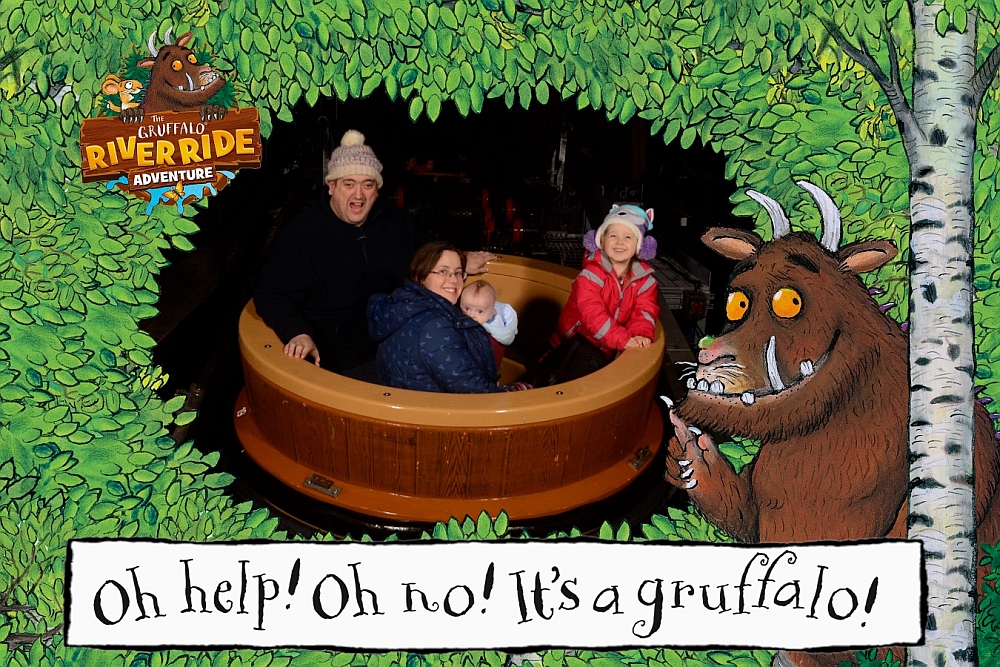 Sophie was very happy to go on Sea Storm next. This is another one of her favourites, but it’s been a while since she’s been able to go on it as I’m the one who usually takes her on it. This time though, Daddy could look after Thomas so Sophie and I could ride the choppy waves in a little boat. Brilliant fun. 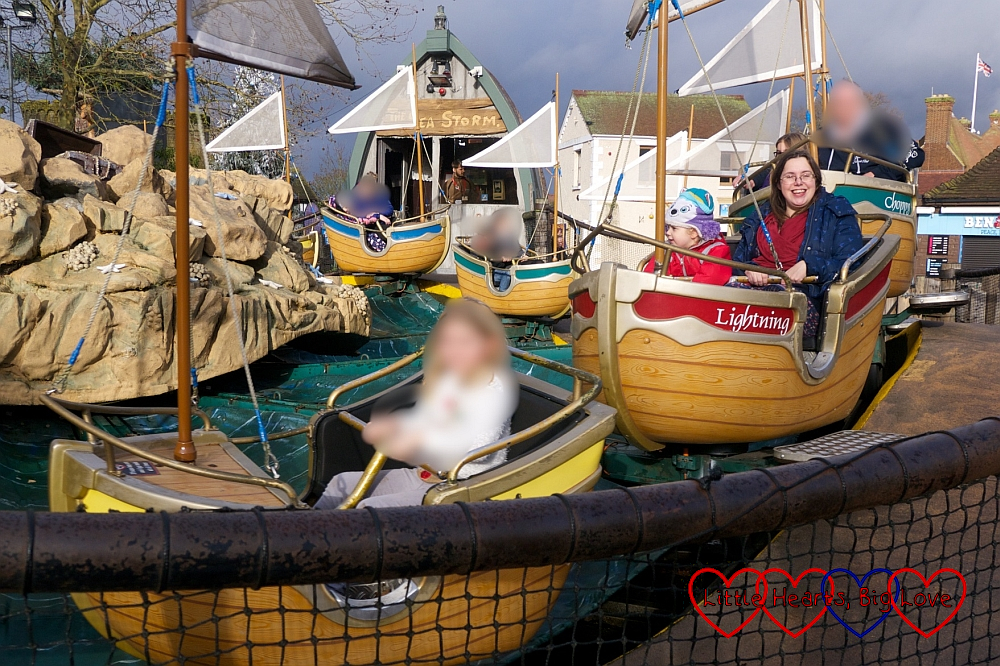 There was time for a ride on a giraffe on the Adventure Tree carousel before we made our way to the Gruffalo Arena for the Gruffalo Christmas Groove show. Sophie enjoyed dancing along to the festive songs in this singing and dancing journey through the deep, dark wood. I loved some of the costumes – especially the robin ones. The highlight though was seeing the Gruffalo in his Santa costume grooving along at the end of the show. 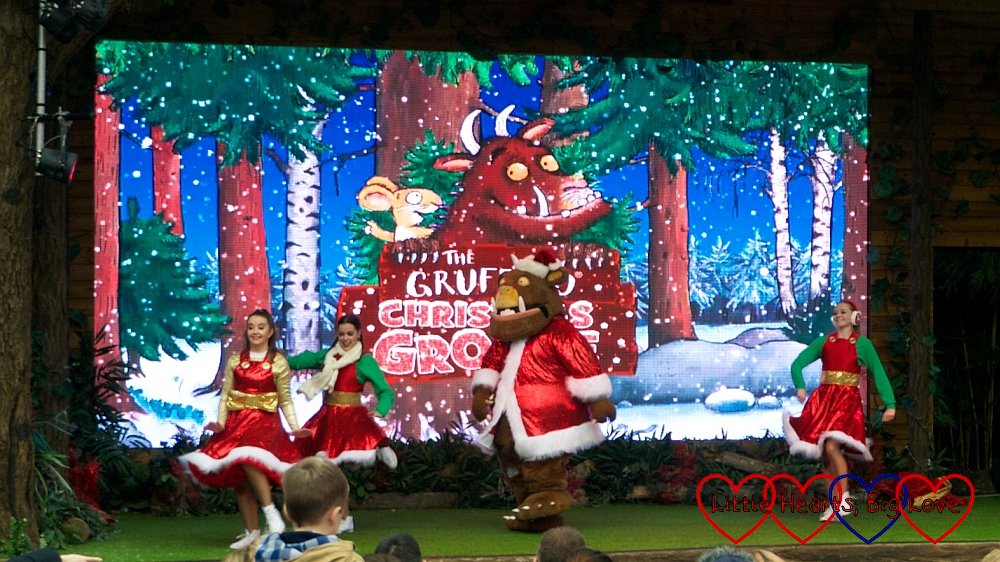 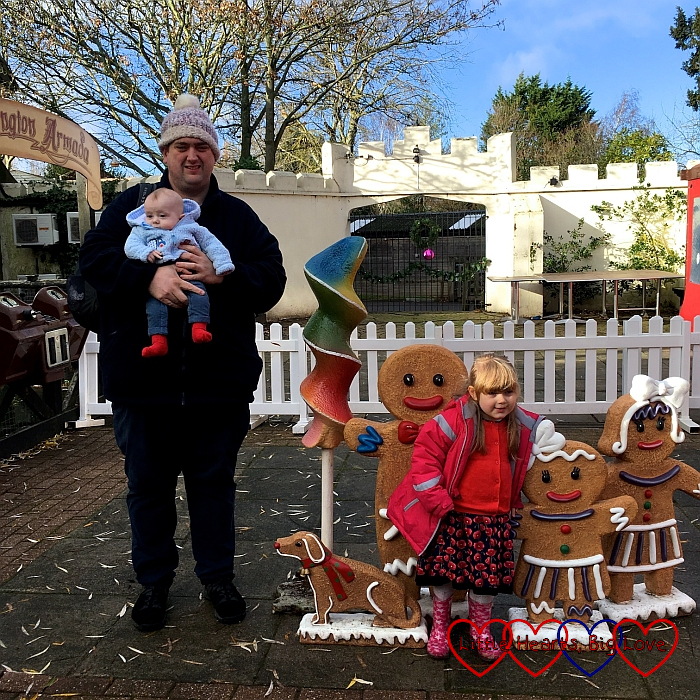 Next stop was the Gruffalo’s Kitchen where Sophie could decorate a gingerbread cookie. There were several different cookies to choose from – each of them being one of the animals from The Gruffalo story. As with last year, Sophie went for the Mouse. She loved decorating her cookie using the coloured icing tubes. 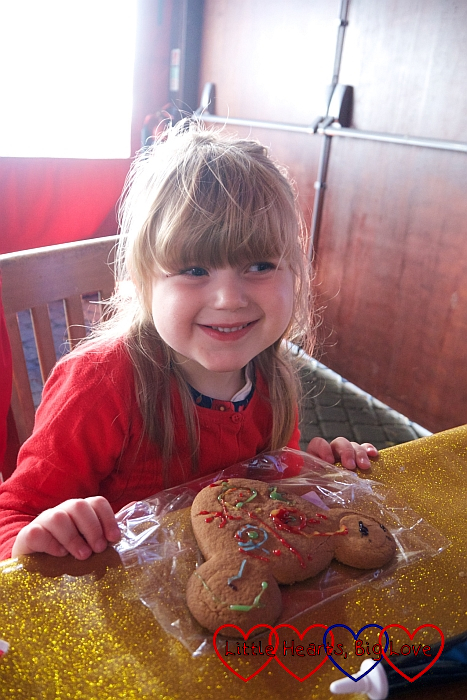 Daddy seemed to get a little confused though… 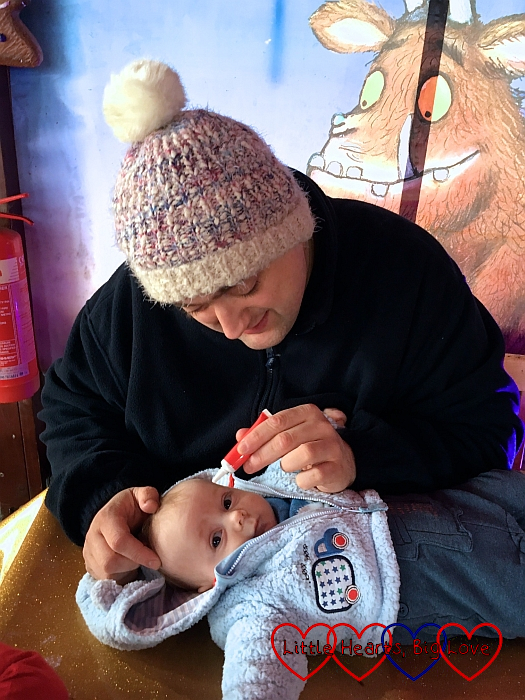 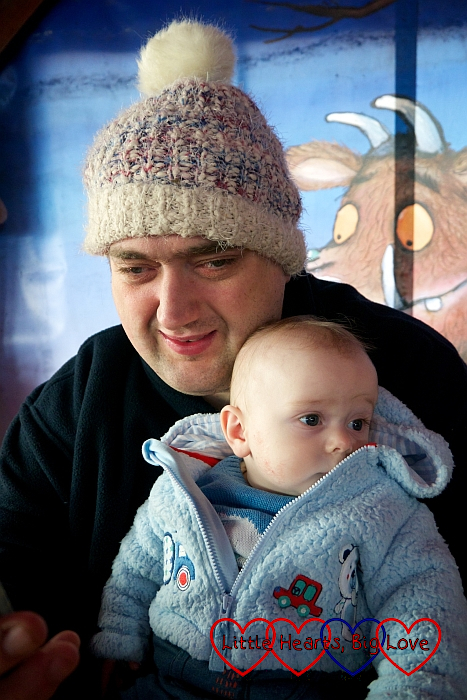 Once the cookie was decorated and eaten, it was time to see Santa. This year, there were lots of animal models in snowy scenes to look at on the way to the entrance to Santa’s Grotto. 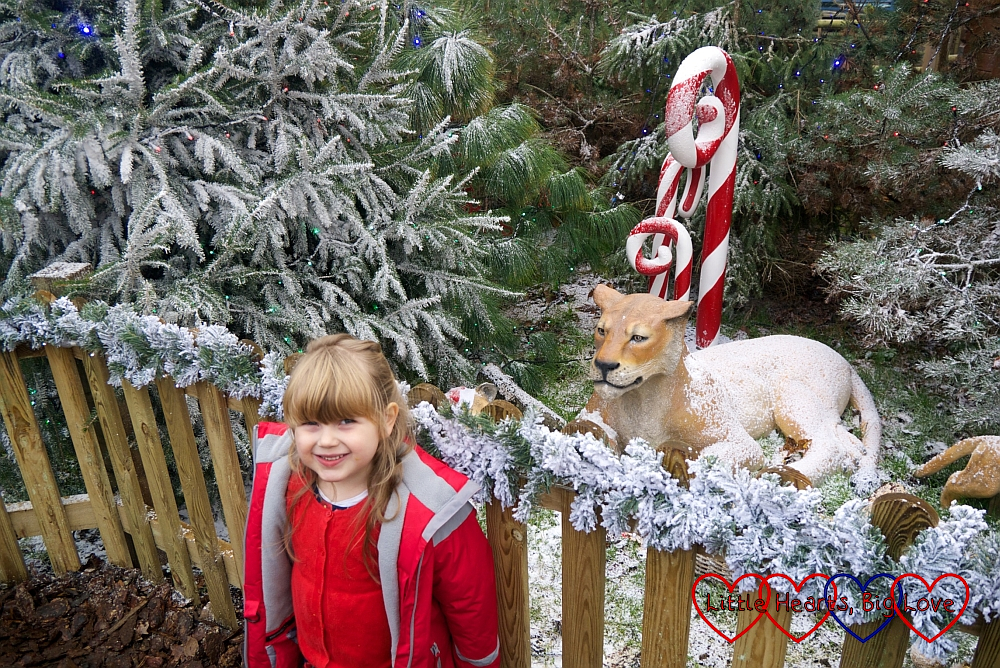 Sophie enjoyed chatting to Elf Cookie at the entrance before another elf took us to Santa’s hut. I love the way all the snowy trees create a mini maze hiding the hut from sight until you’re almost there. 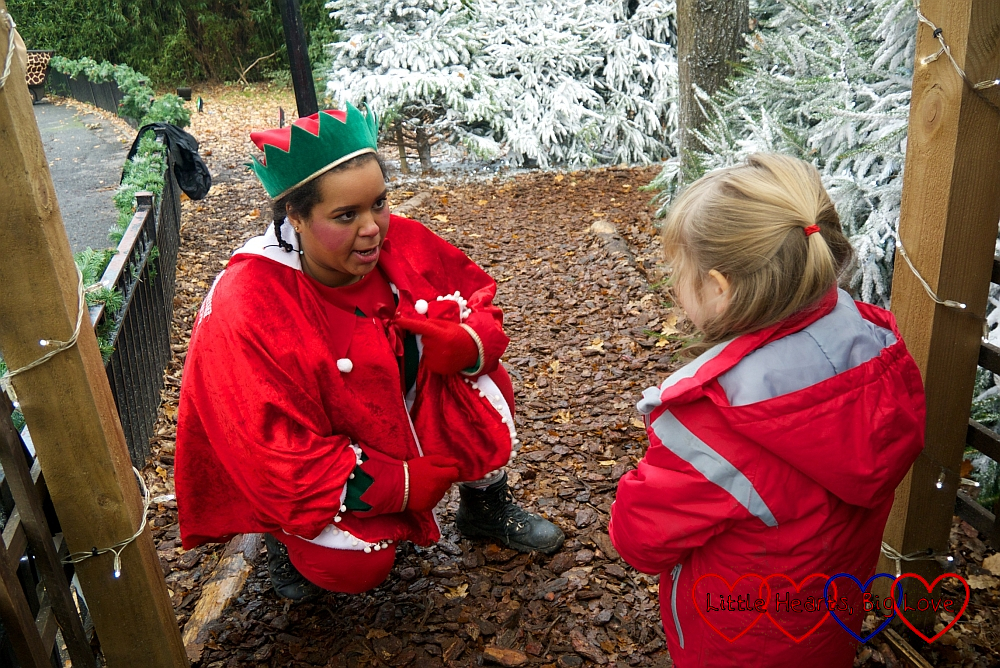 Sophie told Santa that she wanted a Skye toy for Christmas. She’s been very consistent with this request! PAW Patrol is still very much a favourite with her. I found it interesting that she chose a notebook and stationery set – very similar to Jessica’s choice last year. I thought she would have gone for a soft toy instead. Maybe it is due to now being at school and starting to be able to write. 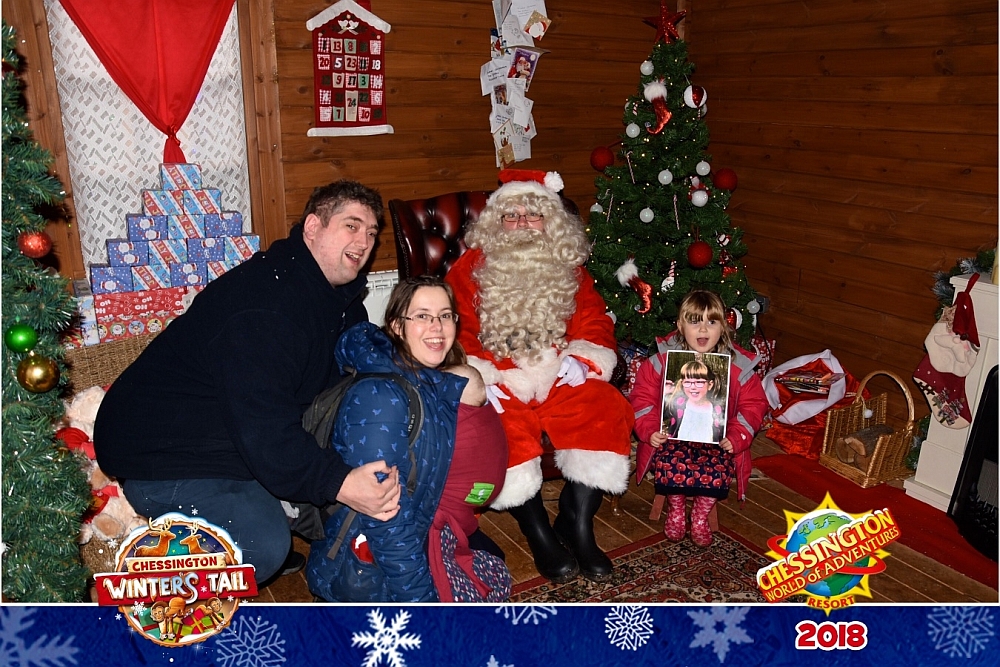 We passed the reindeer on the way out. Sophie stopped to say hello. 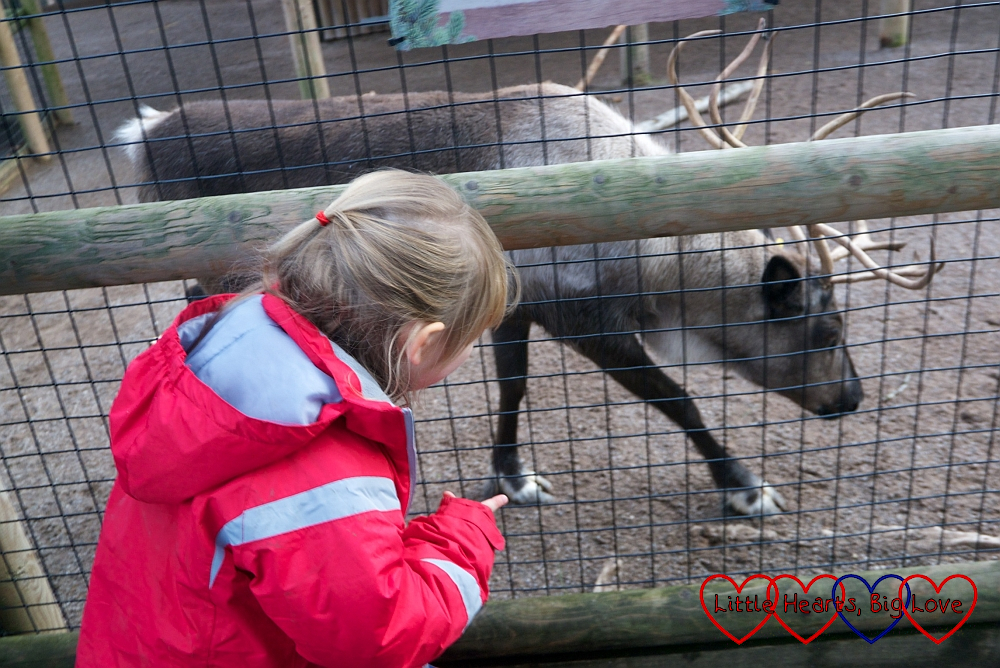 As we’d been on most of our favourite rides out of the few that were open, we decided to go and see some of the animals, starting with the Humboldt penguin feed and talk. I found it interesting to learn more about the penguins, although it was sad too to hear about how mankind’s actions with overfishing and pollution threaten these beautiful birds. 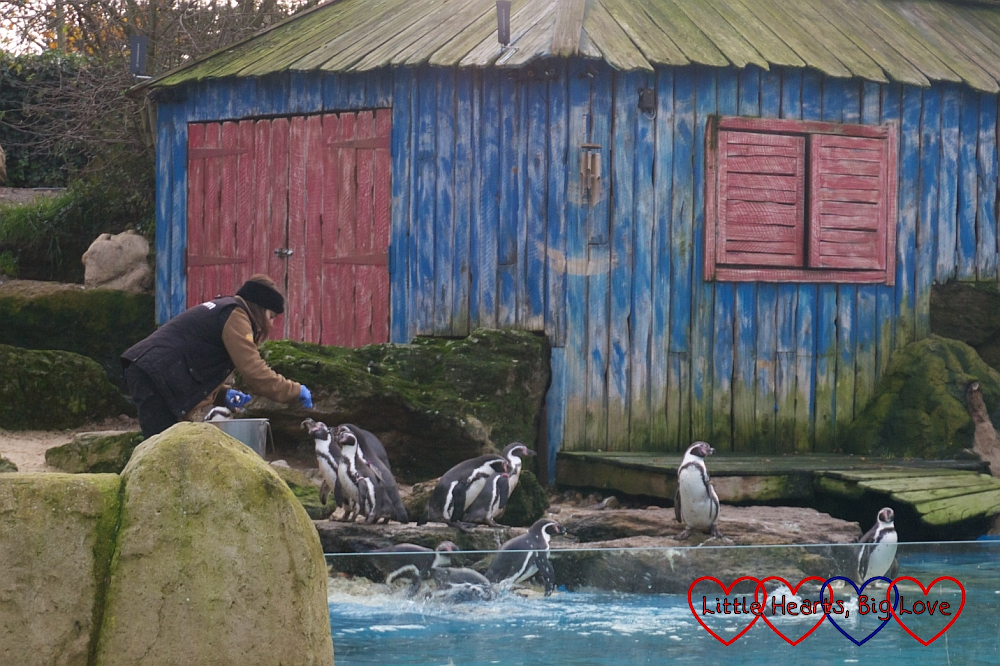 Next up was the SEA LIFE Centre. This is another favourite place for Sophie. She likes to look out for the numbered snails on The Snail and the Whale trail as we go through all the different areas. She also enjoyed getting to stroke a starfish on this visit. 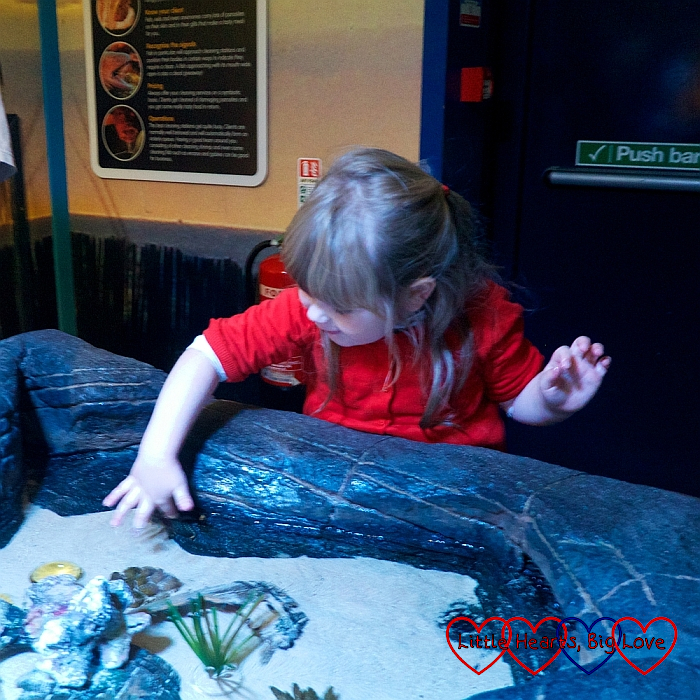 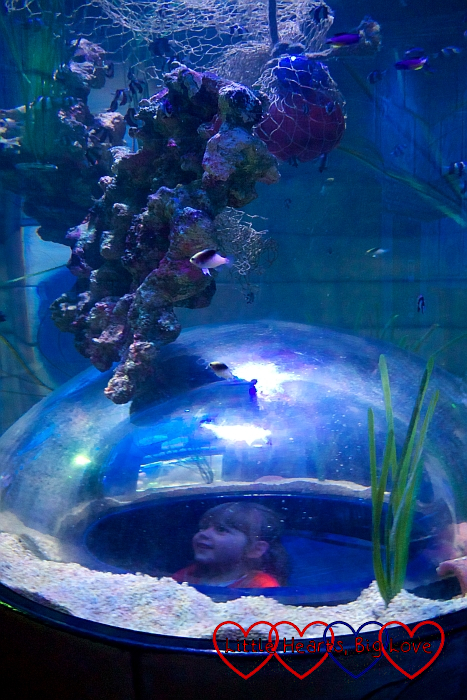 Walking though the tunnel and seeing the fish swimming overhead is always a fun moment. 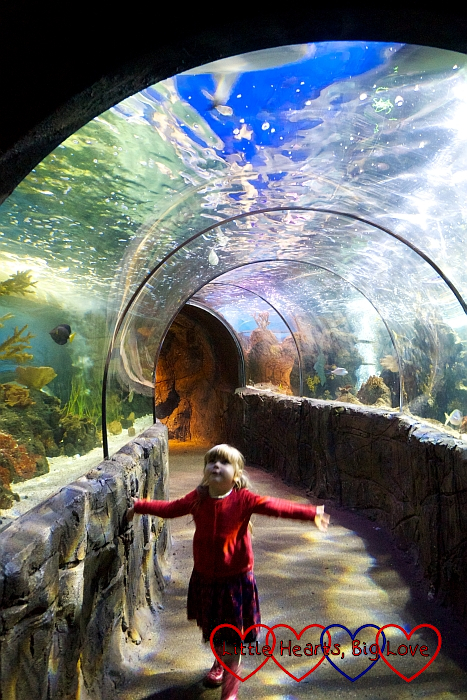 Daddy and Sophie posed for a photo with the witch’s cauldron to advertise Room on a Broom: A Magical Journey which will replace Hocus Pocus Hall next year. 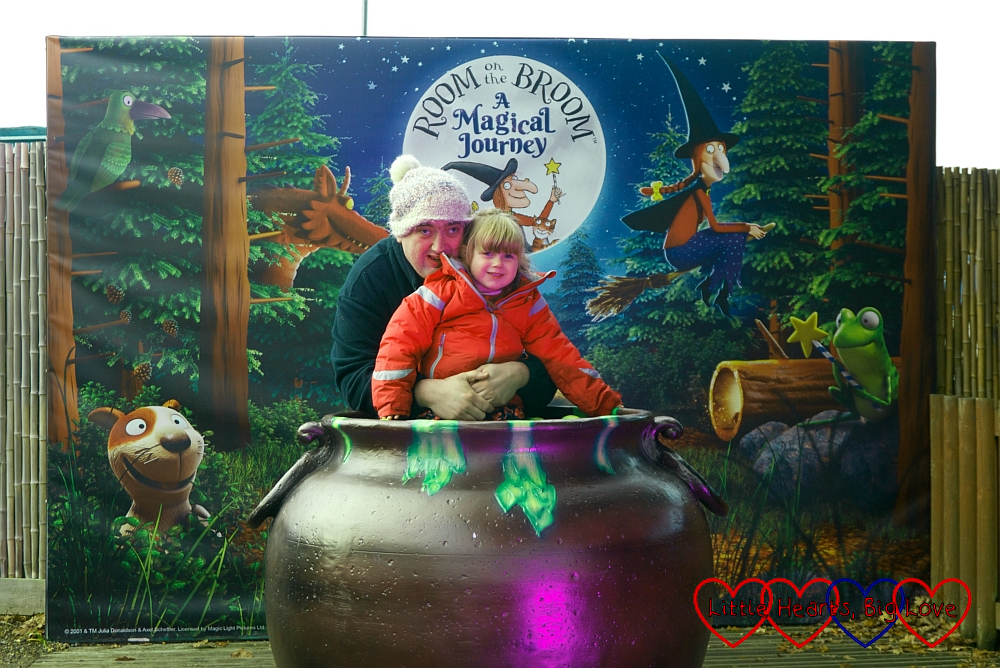 We headed through the Trail of the Kings where it was lovely to see Kipande, the baby Western Lowland gorilla being carried on mum Shanga’s back. She looked very comfy sleeping there. A bit like Thomas who was fast asleep in the sling being carried by me at that moment. Kipande, whose name means ‘parcel’ in Swahili was born in April. This was the first time we’d seen her as we haven’t visited the Trail of the Kings area for a while. Jessica would have loved seeing her – she absolutely adored all babies. 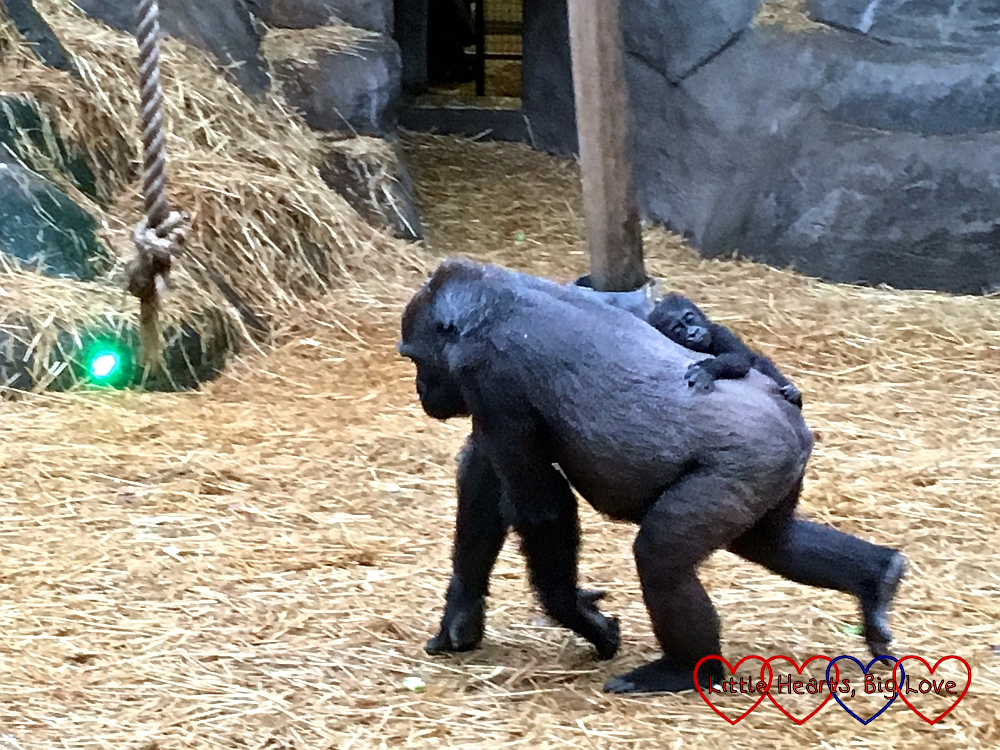 Sophie wanted to see how we all measured up against a gorilla. Daddy was the closest – about the right height at 6ft 3in, but his arms are much shorter. 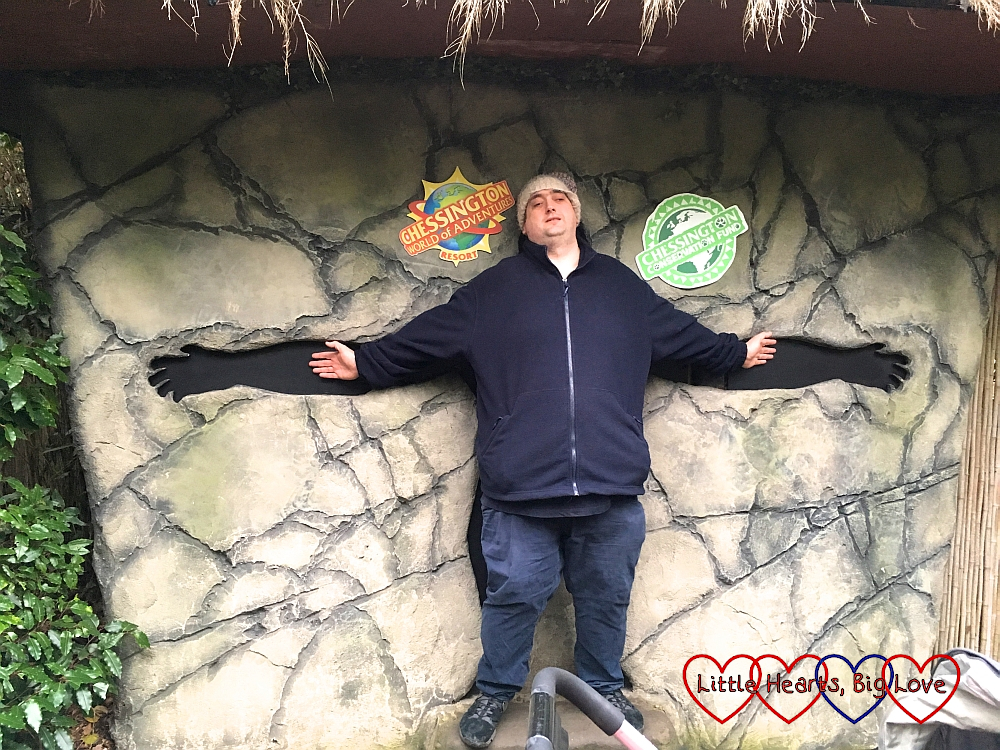 We also saw the tigers and lions. Kamal, the male lion, seemed quite chilled out relaxing when we first walked past. A few minutes later though we heard him roar at one of the viewing windows. It was very loud! Last time we saw him and lioness Rani, they had their three cubs with them but the cubs have now grown up and moved to a zoo in Spain ready to start families of their own. 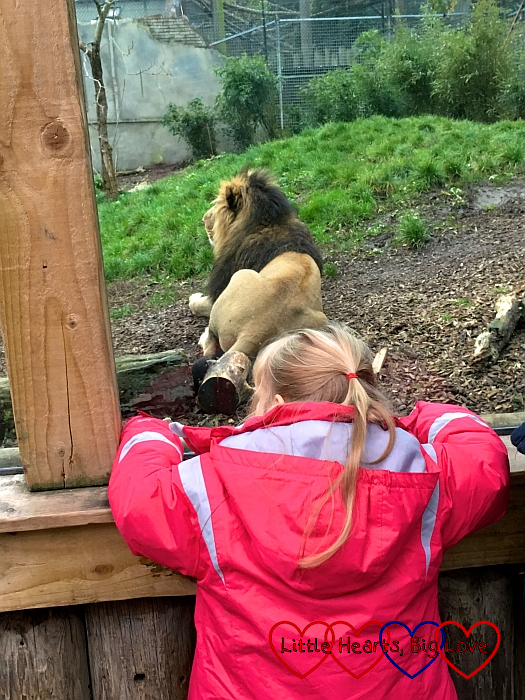 We finished off the day with another ride on the Gruffalo River Ride Adventure. It was so quiet that we were able to stay on and go around twice. Jessica would have loved that too.

As we’d expected, it was a bittersweet day. Most of the memories did make us smile though even if the sadness was always beneath the surface. Sophie had a magical day out though and thoroughly enjoyed herself. 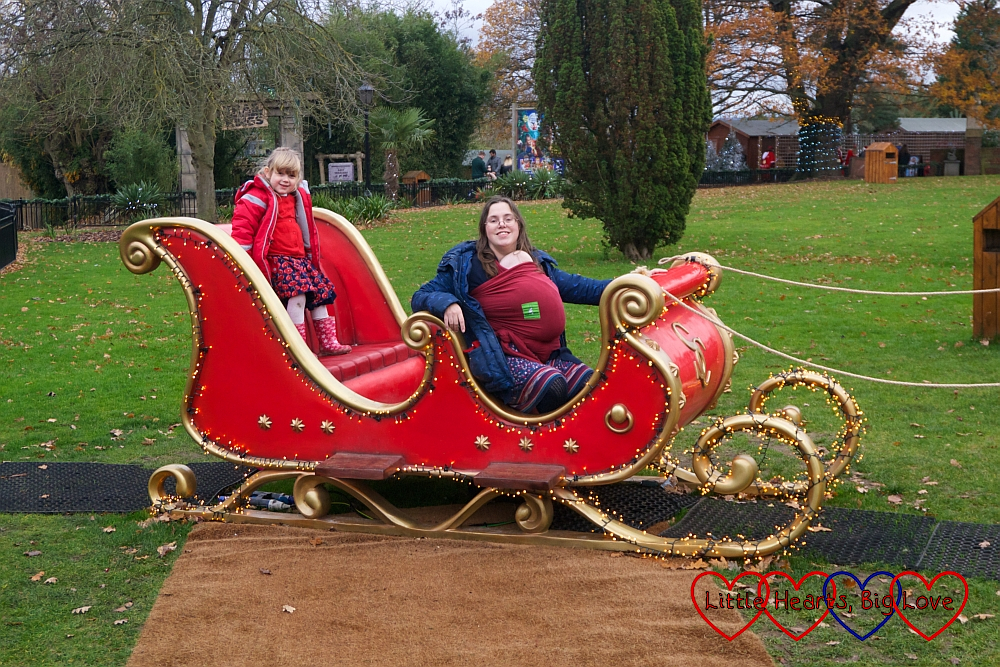 Visiting Chessington World of Adventures – what you need to know:

Chessington World of Adventures is open on selected dates for A Winter’s Tail which runs from 1st December 2018 – 2nd January 2019.

14 thoughts on “Festive fun at Chessington World of Adventures: A Winter’s Tail”