The morning feed run was definitely the highlight of our stay at Coombe Mill over Christmas. Getting outdoors first thing to go and feed all the animals was a wonderful way to start the day. Sophie was always excited to get outside and head to the car park where Farmer Nick was waiting with the tractor. 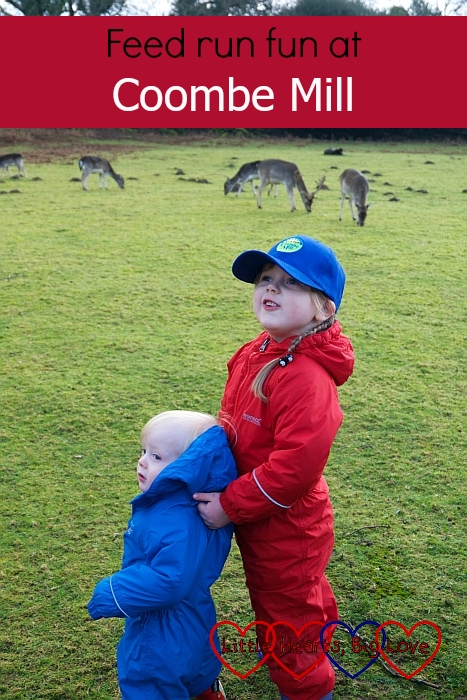 I wasn’t sure how Thomas would cope with riding in the trailer at first so sat with him on the first morning. Sophie is a very caring big sister though and was very good at making sure Thomas was ok, so after that first morning, I went back to walking behind the trailer which I much preferred. As the week went on, Sophie had competition over who would sit with Thomas and look after him as she had made friends with Crazy with Twins’ twin girls who had also taken Thomas under their wings too. 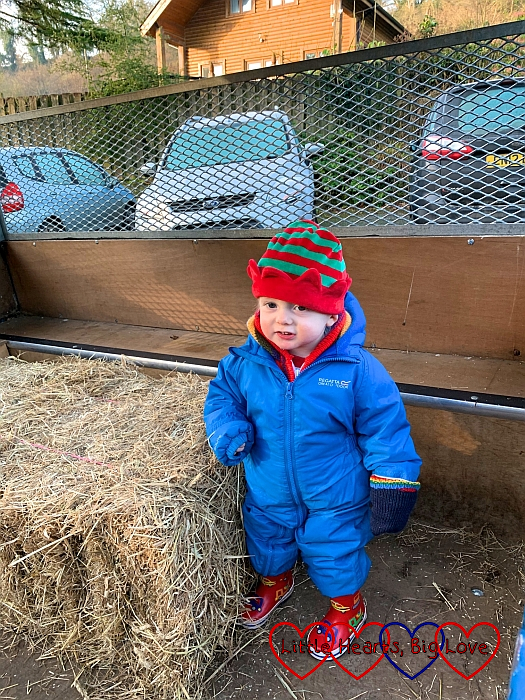 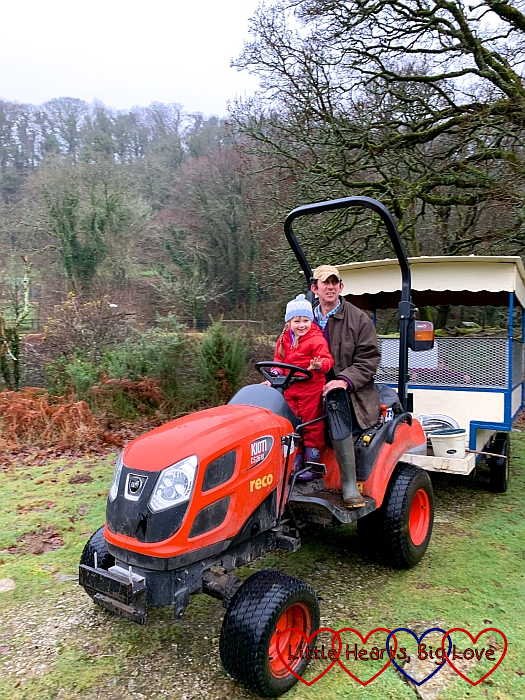 The first stop was usually the pigs. They were always very vocal, especially on Christmas morning when the feed run was an hour later than normal and they’d had to wait for their breakfast! We saved our vegetable peelings and non-meat leftovers for them. Sophie loved feeding our scraps to them each morning. 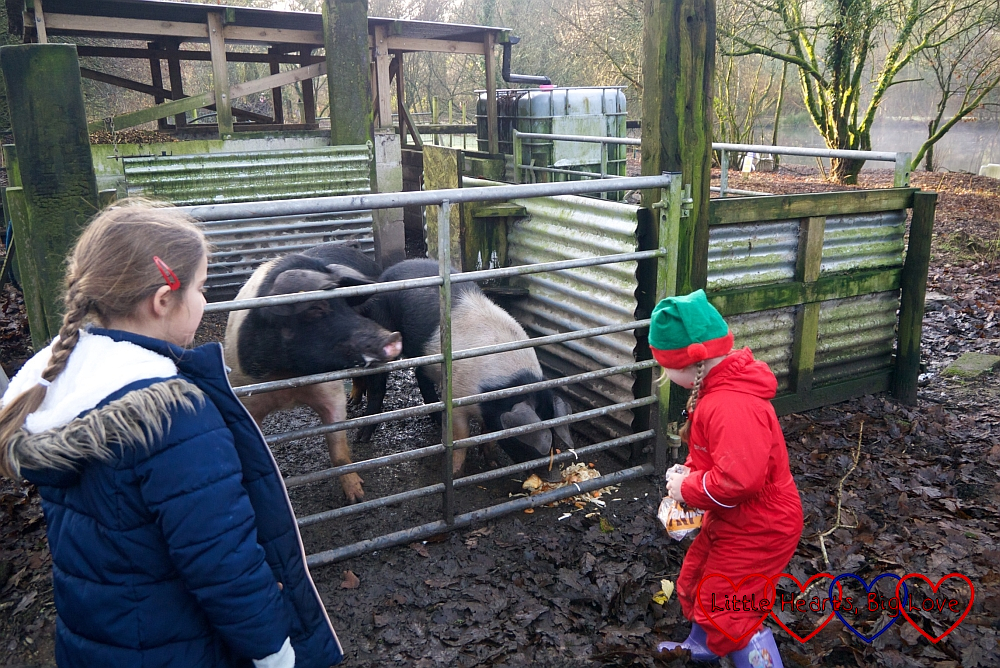 Usually the chickens were next, but on the first morning we were met by Houdini the goat (no prizes for guessing how he got his name!) near the pig pen. He was hauled into the trailer, much to the children’s delight, as they helped hold him, and returned to his field! 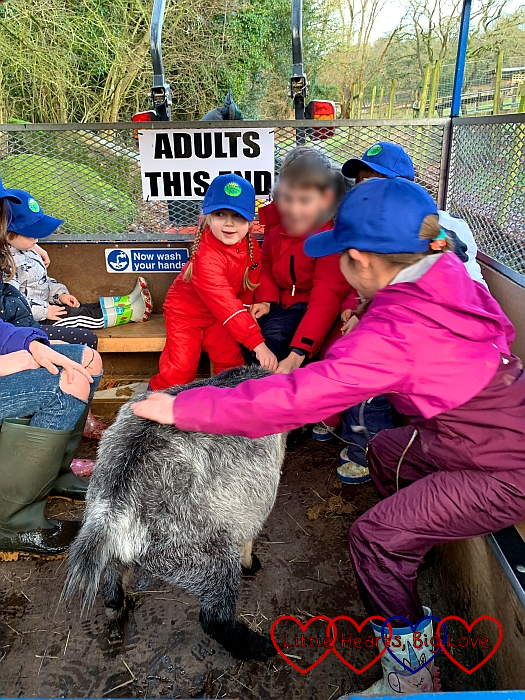 One of my favourite things on the feed run is watching the children collecting the eggs from the chicken coop, and getting to have fresh eggs for breakfast. They taste so much nicer than shop-bought ones! Last year, Sophie was nearly always beaten to the egg boxes by the older children. This time she was much quicker off the mark! She was also very proud of getting to catch and hold a chicken. 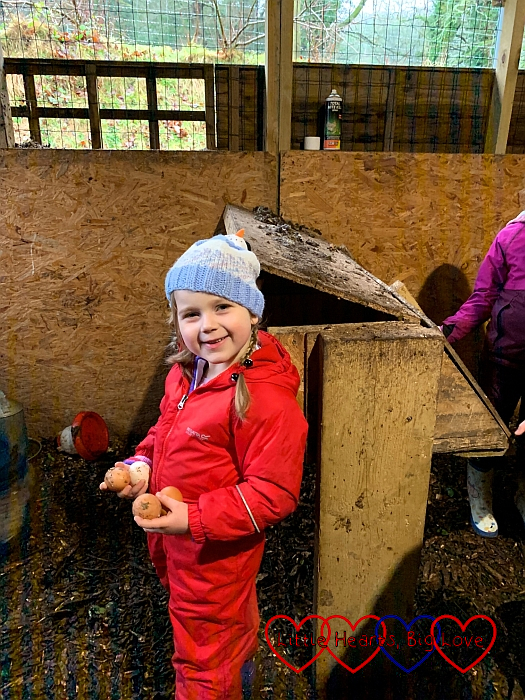 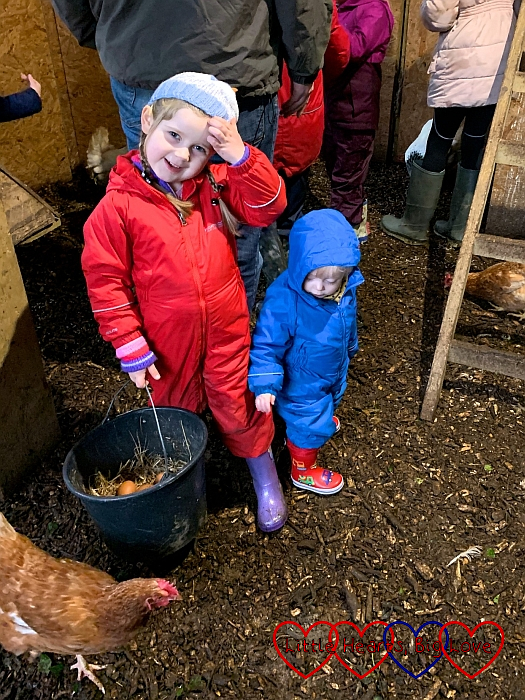 Jurassic Park was the next stop, where the geese, turkeys and guinea fowl were waiting to be fed. It was very, very muddy inside the gate. I mostly stayed outside with Thomas while Sophie went in with the other children. She loved the thick squelchy mud. One of her favourite moments on the feed run was squelching about in it, shrieking that she was stuck in the mud! Pure childhood fun. Thank goodness for wellies and puddlesuits though! 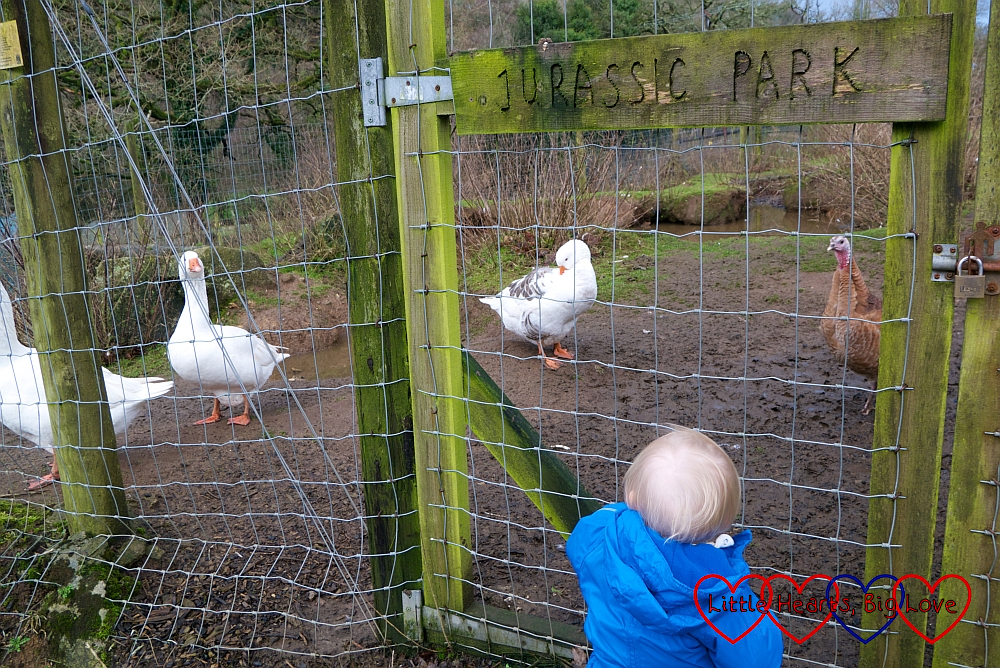 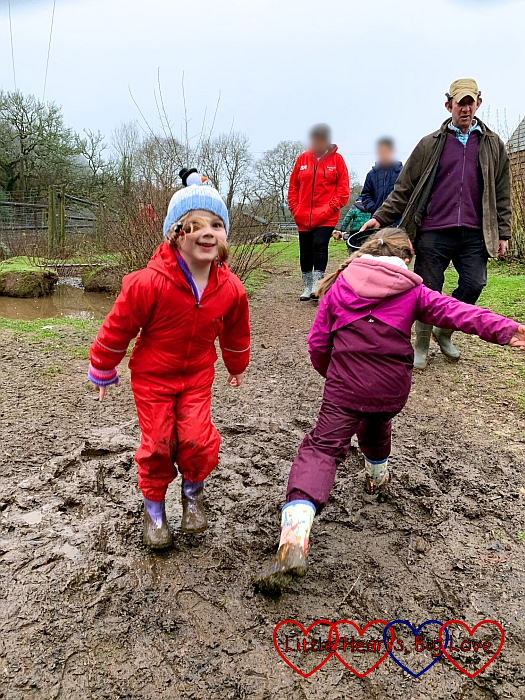 Thomas’s favourite animals were the goats and sheep. The look of joy on his face and his excited squeals of delight when they came up to the fence and nuzzled his hands were just wonderful. We let him have a handful of food once to try and join in with feeding them. Instead of giving it to the goats, he promptly ate it himself! I wasn’t quite quick enough to stop him; thankfully he seemed to be none the worse for it. 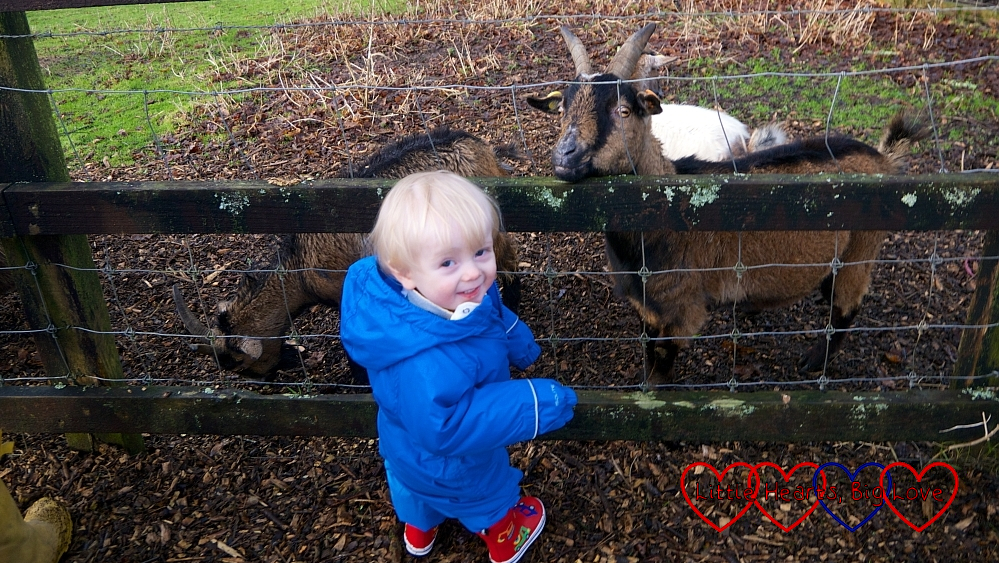 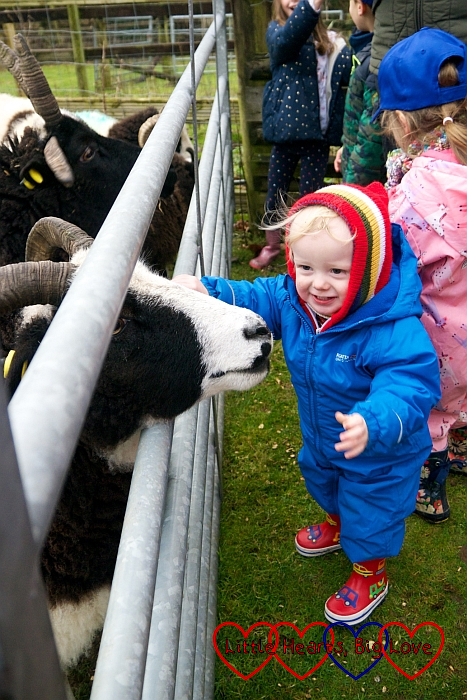 Last year, all the deer kept their distance from us when we went to the deer field. This year, though, a few of them came quite close; Rudolph being particularly brave. The children tried to see how close they could get to him before he would move away. I managed to get within a few feet at one point. He was definitely showing us his good side, standing in the sunlight on Christmas morning. He looked very alert considering the busy night he must have had helping Father Christmas deliver the presents! 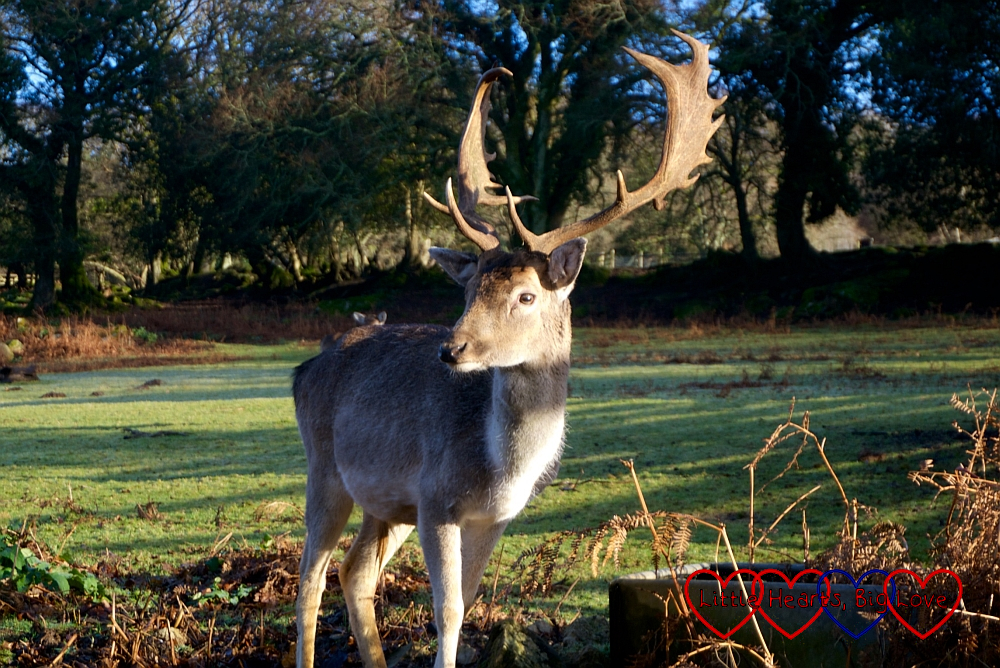 On our last morning, we visited the ponies first. The day before had been a very soggy one and the ponies looked very bedraggled. Farmer Nick showed us how warm their skin was though under their thick hairy coats. Thomas reached out just as one of the ponies turned its head towards us and, before I could stop him, his little fingers went straight in the pony’s mouth. Getting a bite was quite a shock for him, and we had a few tears. It was really just the shock of it though as his little fingers were fine. We kept to a safe distance after that, watching Sophie crouching down and feeding carrots to the ponies. 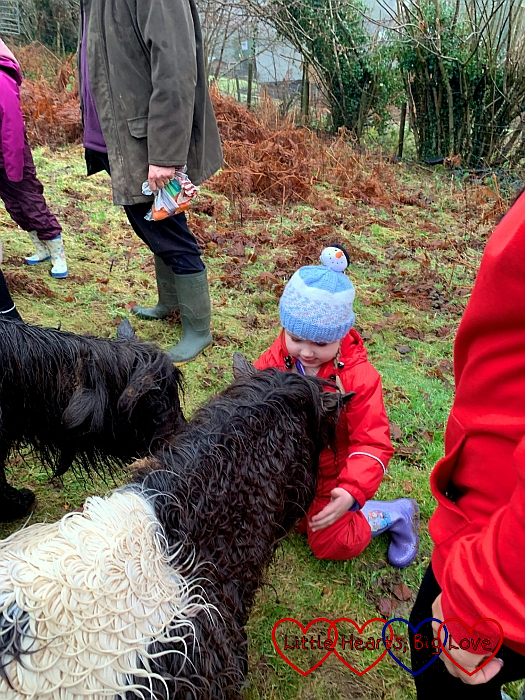 One of Sophie’s other favourite moments on the feed run was crossing the river. She loved following behind the tractor at this point on the feed run so she could wade through the water. 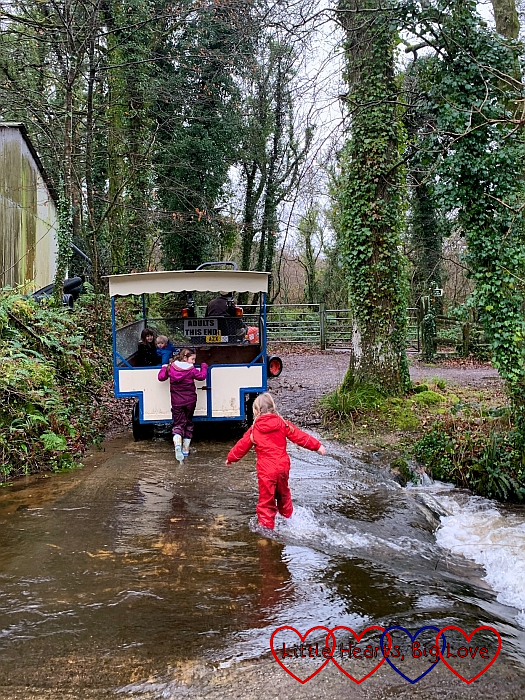 It was lovely to see how getting out for the feed run is something that all generations can enjoy too. It was one of the things that Grandma and Grandad were looking forward to during our stay; they’d even bought new wellies especially! They joined in with the feed run one morning each, riding in the trailer with the children, and chatting to the other grandparents.

Back at the car park, the children shared out the eggs they’d collected. We carried ours carefully back to our lodge for a second breakfast, feeling hungry again thanks to an hour or so in the fresh air. What a wonderful way to start each day. 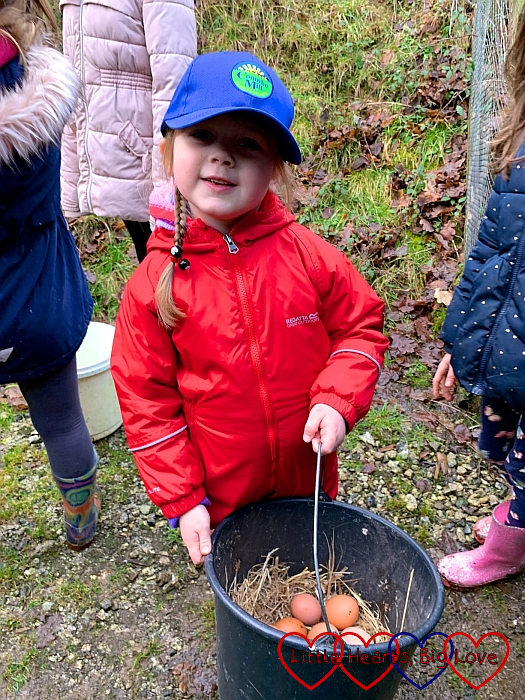