When we were putting together our summer activities list, one of Jessica’s requests was “to find some fairies.” A few days later I discovered that Black Park were running a Fairies and Elves trail at the beginning of August – the perfect opportunity to go hunting for fairies and tick another activity off the list. 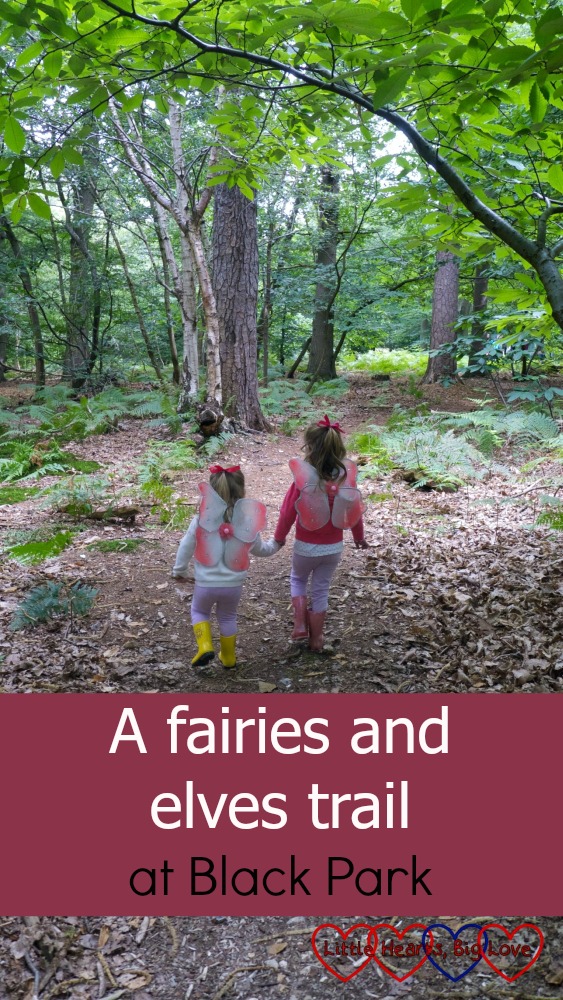 We started at the Visitor Information Centre where we picked up our trail map for £3.  I was pleased to see that the trail took a different route from the Easter egg trail we had done earlier in the year.  This meant we got to explore yet another part of the park we’d not seen before. 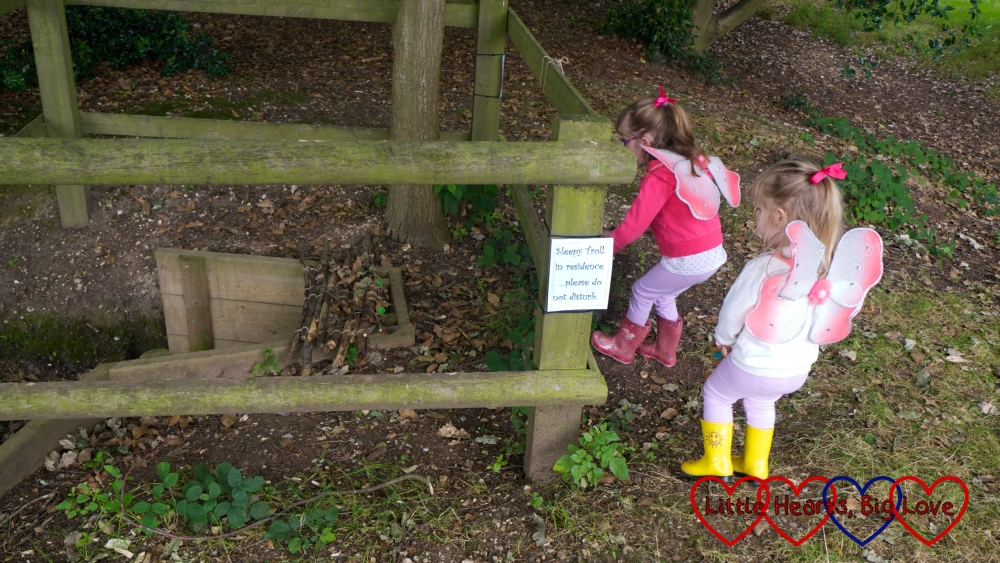 The first magical creature was found just a few feet away – a sleepy troll hiding under the bridge, with just his hands visible. The trail map had various activities for the children to do at each point on the trail. The first one was to draw the troll as we imagined he might look. We thought it was best not to wake him up and find out what he really looked like though – just in case he wasn’t a very friendly troll! 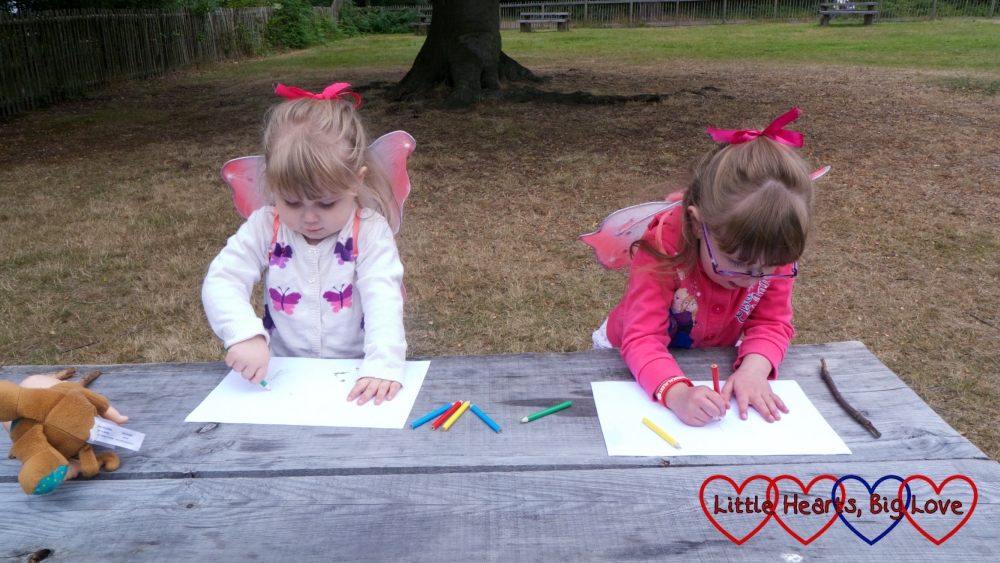 The next point on the trail invited us to pick up some fairy wands in the woods and to say hello to the fairies we saw up in a tree. Jessica and Sophie both wanted to stop for a while so they could sit and do some drawing before moving on. 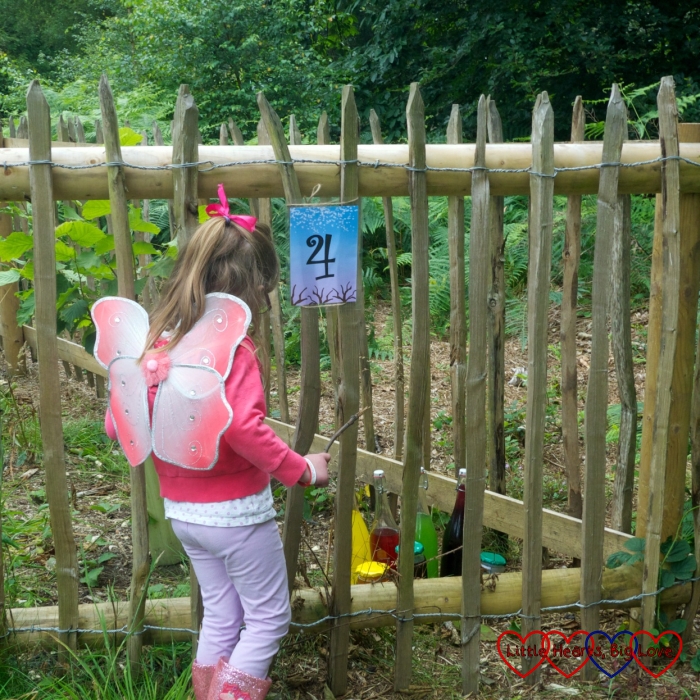 The fairies’ potion store was the next find –  a colourful collection of bottles, jars and natural ingredients.  We stopped again to colour in the potion bottles on our activity sheet.  A few feet on, we spotted the elves’ washing hanging out to dry above our heads. My own little fairies stopped for another rest and the chance to look over the map together. 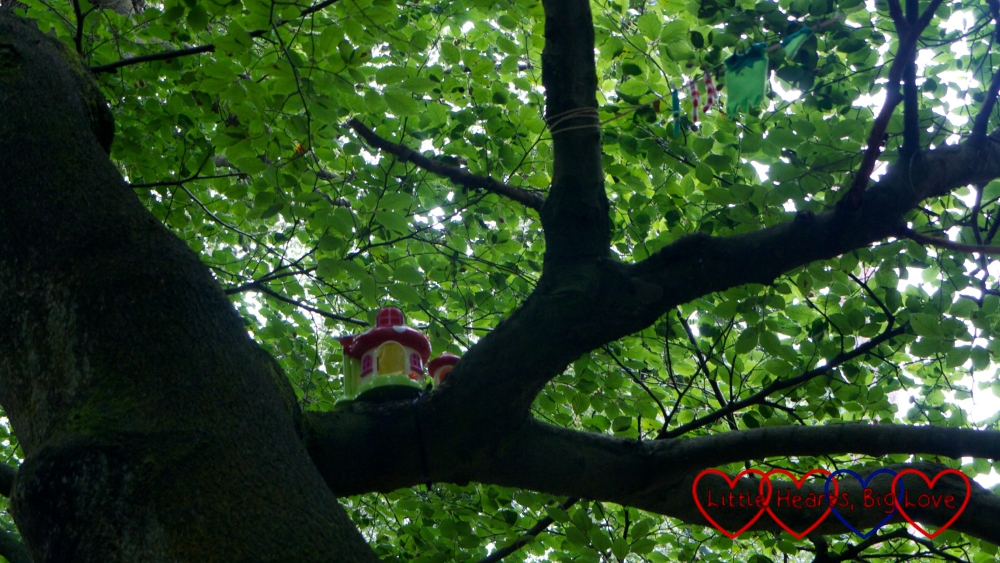 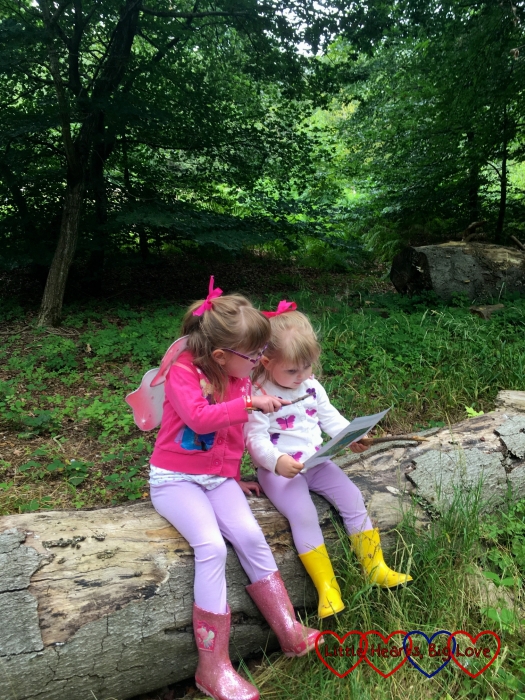 As we continued along the path, we found a fairy’s house in a tree. Sadly she didn’t seem to be at home though.  We also found some cauldrons in the wood ready for mixing some magic spells. The girls added some leaves and gave it all a good stir, whilst saying some magic words.  Whoosh! Mummy was suddenly turned into a frog! Thankfully I only had to hop and croak for a short distance before Jessica turned me back into Mummy again. 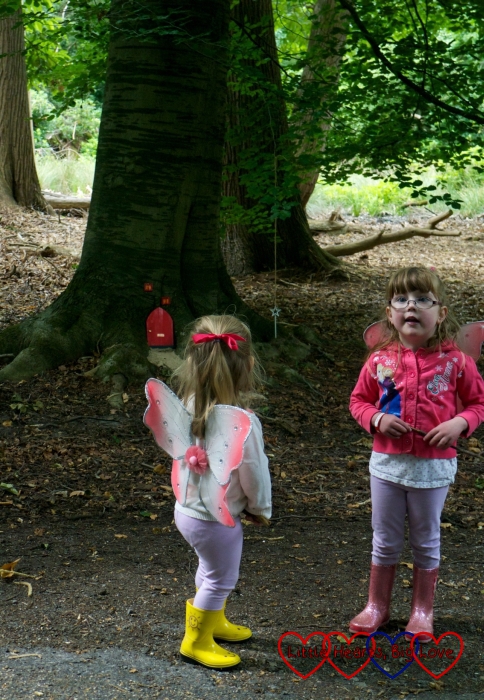 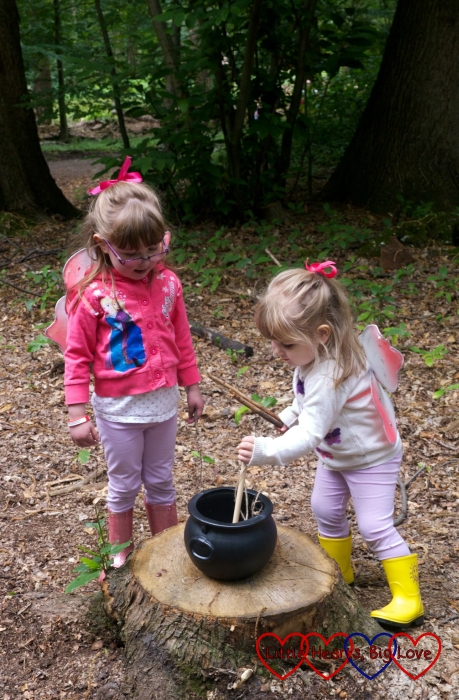 The fairies had clearly been having a party in the woods before the Big People appeared and had left their tea set behind.  We also came across the fairy High Street with a variety of different shops – places to buy spell books and hats, and to have wands repaired.  Jessica wanted to peek inside the shops, but we didn’t know the magic words that would let us open the doors. The final stop on the trail led us to a little ladder inside a tree, leading to the home of a little elf, although once again we weren’t lucky enough to catch a glimpse of him. 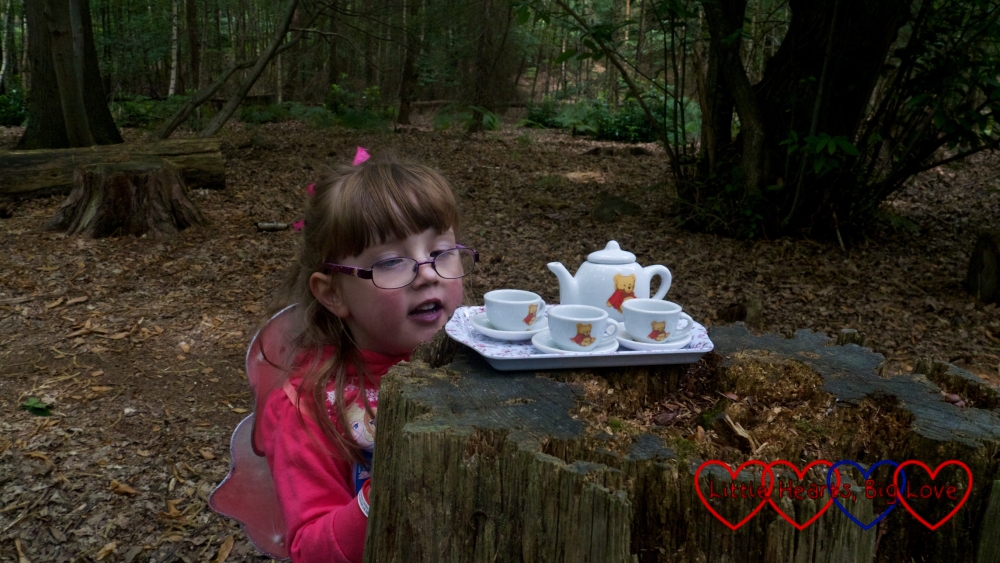 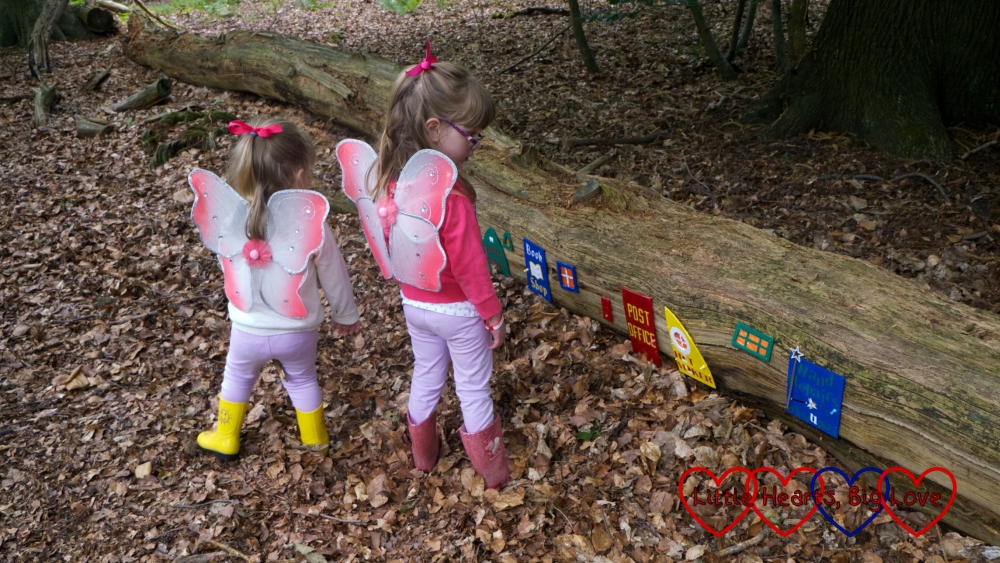 Jessica and Sophie enjoyed the trail so much that after we’d returned to the Visitor Information Centre to collect their treats for finishing the trail, they wanted to do it all over again.  This time, the girls also joined in with helping some other children build a den.  I’m not sure that the small sticks the girls chose added anything in the way of structural support, but they certainly enjoyed joining in! 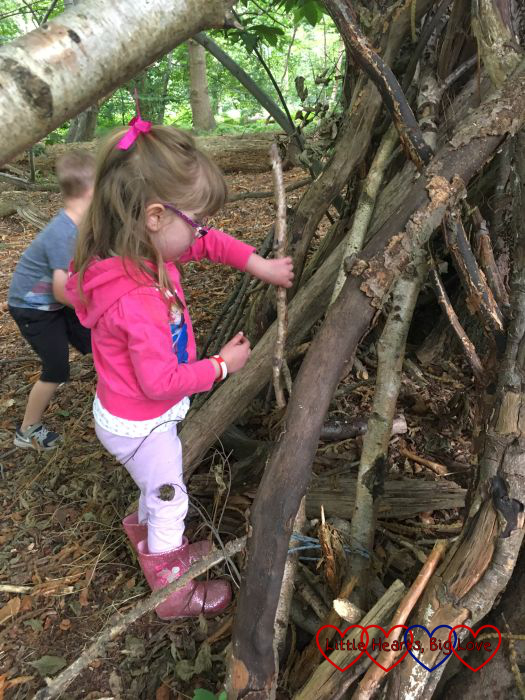 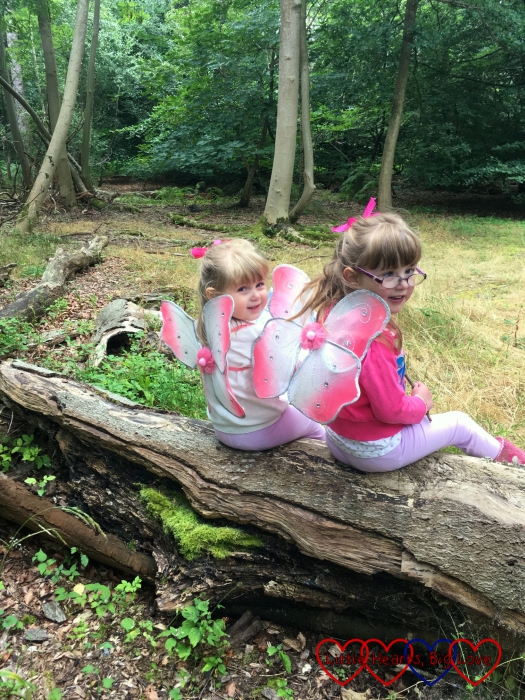 As always, the girls came home with a few treasures from the woods, including the stick wands that they had picked up whilst doing the trail.  We decided to make them even more magical by adding sparkly pipe cleaners and fabric flowers to decorate the wands.  Three weeks on, the wands are still in the dressing up box and getting plenty of use whenever the girls decide to play at being fairies together.  The only downside is that Mummy is getting a little tired of being repeatedly turned into a frog! 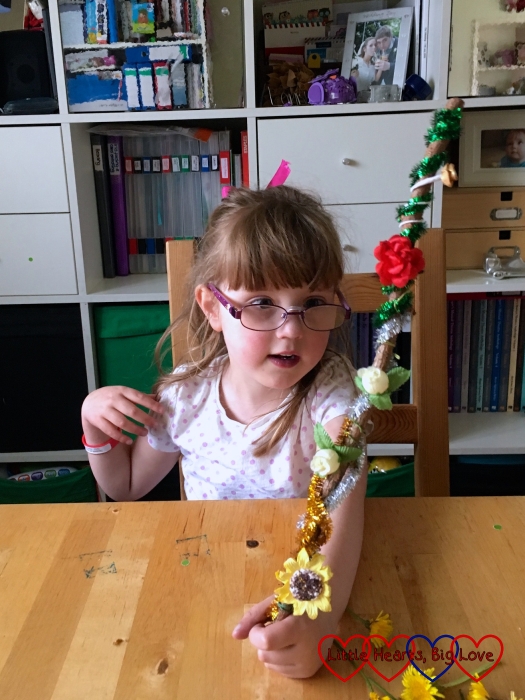 20 thoughts on “A fairies and elves trail at Black Park”