One of our favourite places for a day out is Chiltern Open Air Museum, which is fairly close to where we live.  I love the feel of stepping back in time and seeing how people lived and worked. The Black Country Living Museum therefore sounded like the perfect place for a family day out during our recent weekend away in Birmingham. 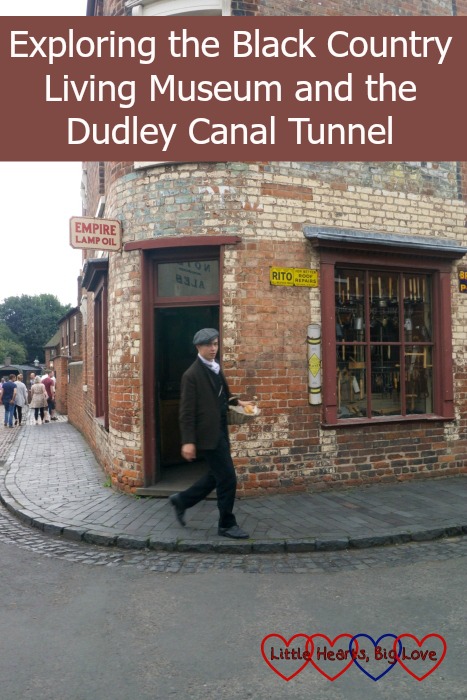 We started off with a trip on the trolley bus to take us into the recreated village in the museum.  The girls found the conductor on the bus fascinating. He spent some time explaining his role to them, telling them how he was responsible for looking after the passengers on the bus and helping them get on and off at the right stop.  We decided that our first stop would be the fairground.

The fairground rides were still closed when we arrived but gradually opened up.  We needed to buy tokens to go on the rides. The tokens cost £1.50 each. There were only a couple of rides that were suitable for the girls though – the roundabout which cost 1 token each and the junior swing boats which were 1 token per boat. 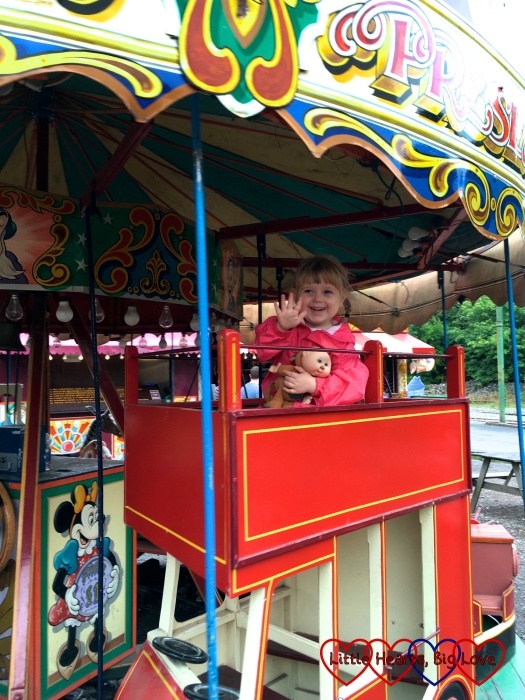 While the girls both enjoyed going on the roundabout, it was the swing boats that were the big hit. We spent a long time with Daddy pushing them both on the boat with squeals to go “higher, higher!” – a bit too high for Mummy’s comfort levels I have to say, but they loved it! 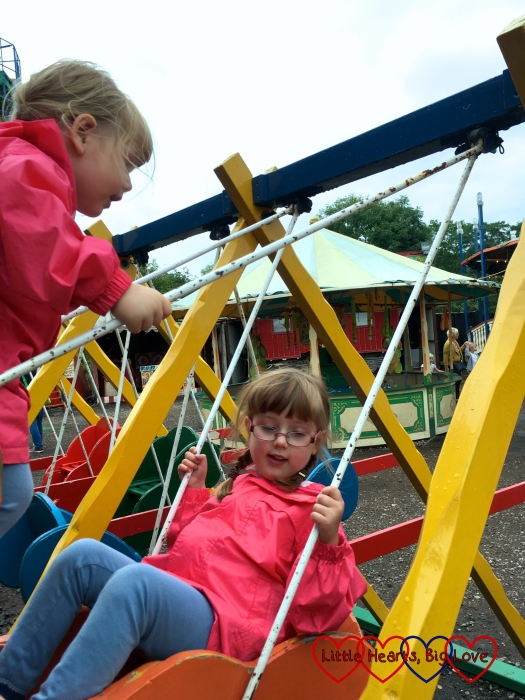 The shops in the village were quite busy and there were some very long queues.  Thankfully the queue for the sweet shop wasn’t too long though. We couldn’t resist buying some aniseed balls and barley twists.  The fish n chip shop looked tempting but the queue was huge. We went to look around the school instead.  There were no lessons taking place as it was lunchtime. The girls were quite happy to stop for a moment though and do some drawing at the desks. 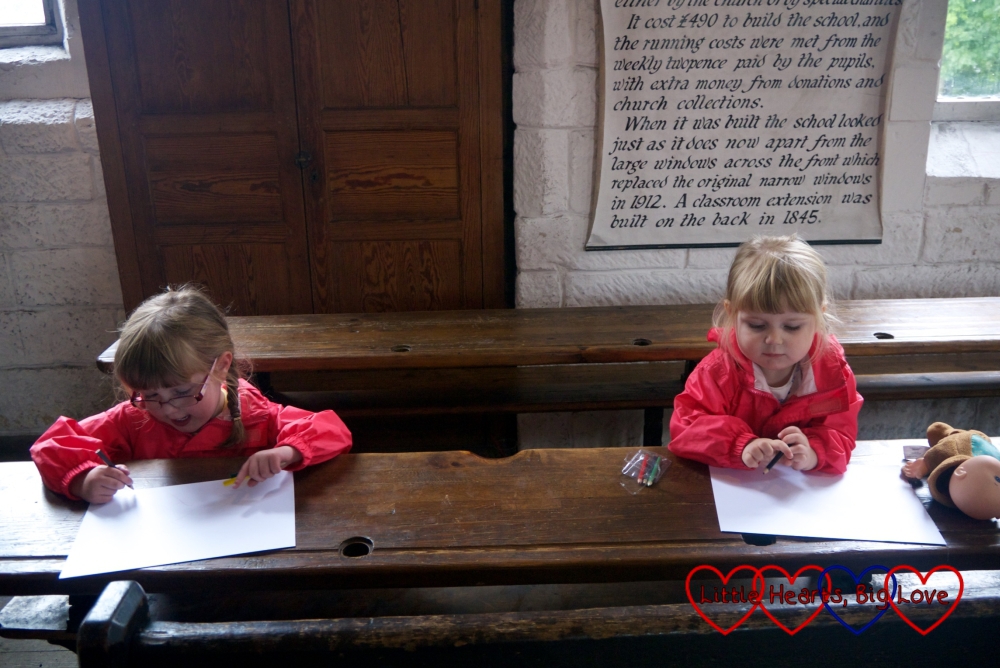 Beyond the village there was an exit towards the Dudley canal where we could book a boat trip through the Dudley tunnel. As both hubby and I used to love travelling along the canals on narrowboat holidays, we couldn’t resist the opportunity for a boat trip.  While waiting for the boat trip, I had a go at finding out what legging a boat through the tunnel was like. As it turned out, I could have tried it for real on the boat trip but decided not to volunteer for that one. 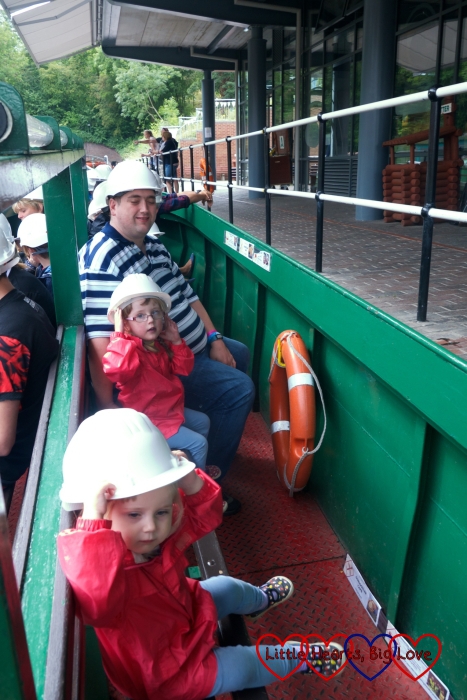 We donned hard hats for the boat trip. These were a bit big for the girls although Sophie needed a bit of encouragement to keep hers on! The girls quite enjoyed their boat trip into the tunnel and looking at some of the caverns. We learned about the sea creatures that were here millions of years ago. Dudley was surrounded by warm tropical sea back then. The coal that formed in the area along with limestone was a key part of the its importance during the Industrial Revolution. 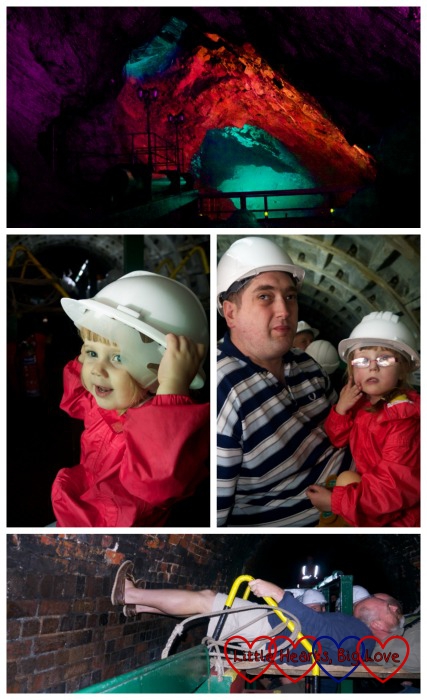 After our boat trip, we returned to the museum to look at some of the back to back houses and have a wander around the canal. We spent a few moments watching a chain-making demonstration nearby. The girls were starting to get a bit restless and hungry though. Fortunately the queue in the fish ‘n’ chip shop was now much shorter. 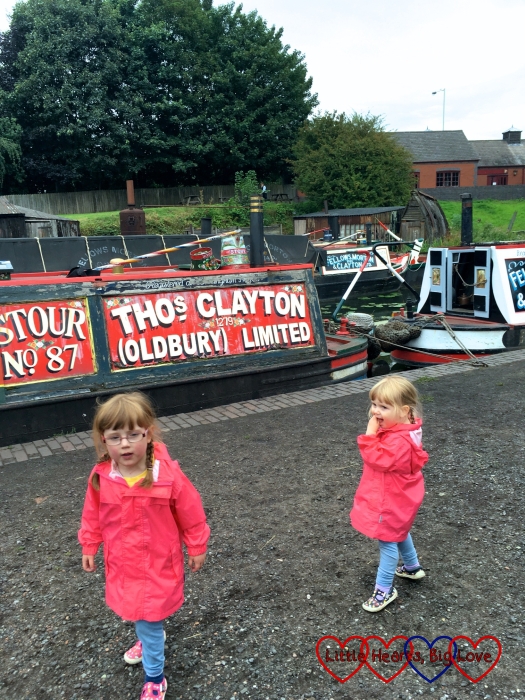 We timed our stop at the chippy perfectly. The heavens opened just after we reached it. Although the girls had their waterproof coats on, hubby and I had left ours in the car. It was a good time to sit indoors and enjoy our fish and chips while waiting for the rain to stop. 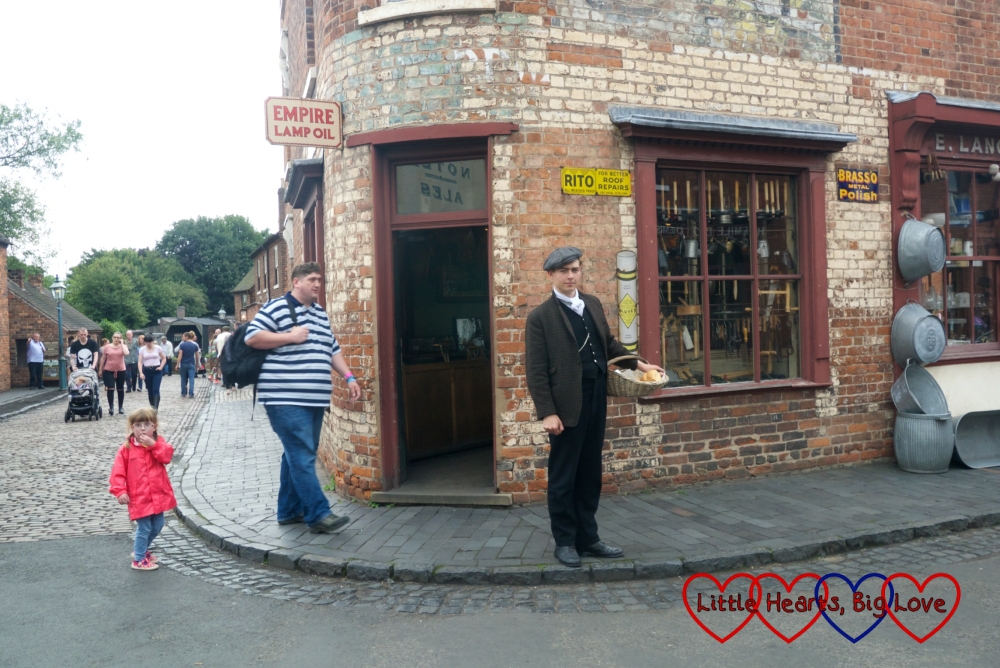 Jessica would have liked to return to the funfair but it was getting towards closing time. With further downpours threatening we decided to make our way back up the hill. We took a quick look in the entrance to the mine on our way back. The girls also spotted some pigs in one of the garden and stopped for a moment to say hello.

It was a shame we hadn’t been better prepared for the weather. There were a few areas of the museum that we didn’t get to explore as a result. We all enjoyed our day out and its somewhere that we would enjoy visiting again if we lived closer!