I didn’t expect it to end quite so suddenly. One day Sophie was happily breastfeeding before she would settle down for naps and bedtime. Then one night, she declared “no booby, Mummy” and that was that. I wish I’d known the end was coming. If I had known, I would have cherished the snuggles and that very last feed, instead of checking Twitter on my phone. I wouldn’t have said no to that last “wan’ booby, Mummy” and distracted her with cake. We were out and I was too self-conscious to feed my toddler in public. If I had known, I would have picked her up and treasured the moment.  I wouldn’t have cared what anyone else thought. The last time came and went and I never knew it until it was too late. 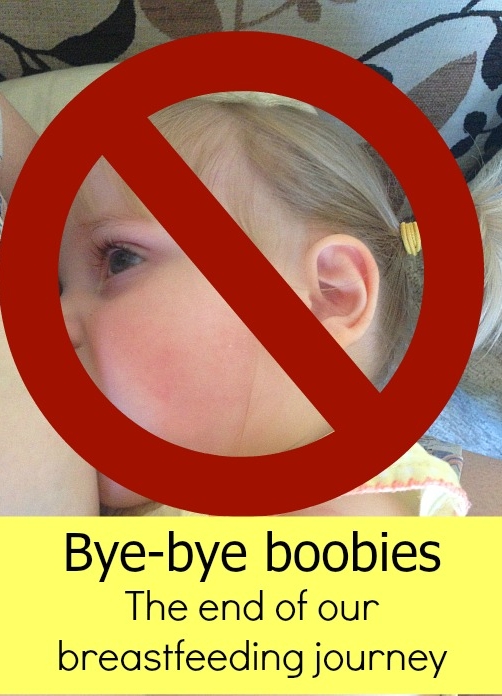 The sadness at our breastfeeding journey coming to an end has surprised me with its intensity. I didn’t expect to feel this way. I didn’t feel this amount of sadness when Jessica stopped breastfeeding at seventeen months. Maybe it was because the end came so naturally with Jessica. It was anticipated and expected. I was able to treasure those moments, knowing that they were coming to an end. Maybe it was because I was pregnant with Sophie at the time and knew that a new journey would hopefully start.

It wasn’t as if I always enjoyed our breastfeeding journey. Sophie had moments of being a little vampire sometimes. Breastfeeding wasn’t always pleasant but it was something that I, and I alone, could do for her. It was the one thing that I knew I could do. Something that I knew I was good at. It was the biggest positive that I held on to during those months of struggling through postnatal depression. A bond that we had that no-one else could have. To have that bond so abruptly broken breaks my heart. It reminds me that my baby girl is growing up and that she is becoming increasingly independent. When she stopped breastfeeding, she took another little step away from me.

I’ve shed a few tears over it and will give myself a little time to grieve this little change. No doubt I will readjust to it. I’ll open my wardrobe again and be able to choose an outfit without wondering whether I can feed easily whilst wearing it. Five years of being either pregnant or breastfeeding has led to a fairly restricted wardrobe on that front. I don’t think I still own a bra that isn’t either a maternity or nursing bra! A bit of retail therapy might be needed!

I will miss the times of Sophie singing “hello boobies, I love boobies” and saying “wan’ booby” in such an adorable way. I will miss the “thank you for boobies” in the bedtime prayers. And most of all I will miss those sleepy snuggles and the moments of knowing that I was nourishing my baby girl both physically and emotionally.   It’s the end of an era, and in many ways the end of Sophie’s babyhood. My baby has gone forever, replaced by my beautiful toddler. But there are still new memories to be made, snuggles to enjoy and no doubt there will be more last times to shed tears over too.

28 thoughts on “Bye-bye boobies: the end of our breastfeeding journey”