As Jessica had an inset day on Monday and her preschool pass was valid that day, we couldn’t resist a trip to Legoland, with her friends H and E, to take part in their Brick or Treat event.  I hadn’t originally intended to put the girls in costume (we don’t really do Halloween) but when H and E’s dad told me there was a fancy dress competition, I couldn’t resist trying to put together some costumes for the girls so we could take part! 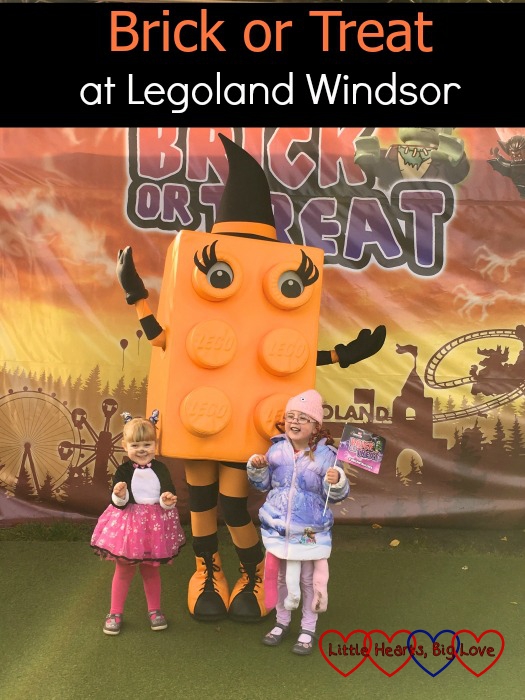 Jessica’s octopus costume was originally made for her just before her second birthday.  Back then, the octopus legs were as long as her own legs – seeing how short they are now is definitely a reminder of how much my big girl has grown! We decided to turn her hair into octopus tentacles too by doing eight plaits wrapped in sparkly red pipe-cleaners.  I couldn’t resist doing something similar to my hair with green pipe-cleaners and turning myself into Medusa for the day! 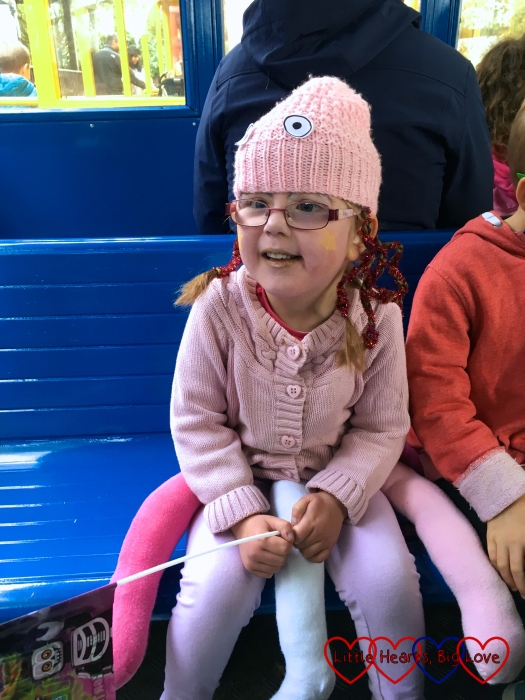 It was the third Halloween in a row that Sophie’s cat costume was used – it was originally bought for Jessica and then Sophie wore it last year. It still fit – just! – but I couldn’t find the headband that went with it so decided to turn Sophie’s hair into cat ears by making two buns on top of her head and then wrapping them with sparkly silver pipe-cleaners.  It turned out to be a good thing that I’d lost the headband – Sophie ended up winning the fancy dress competition in the 0-5 age category and I think it was the sparkly ears that swung it for her!  She was very chuffed with her prize – a cuddly toy and a book – and was definitely like the cat who had got the cream for the rest of the afternoon! 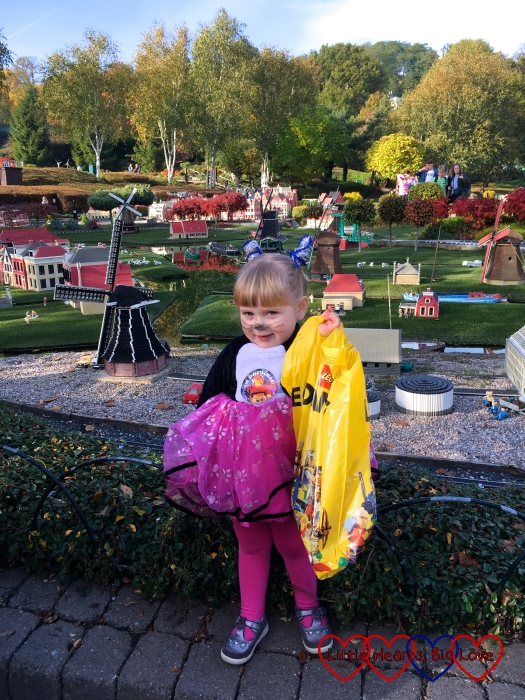 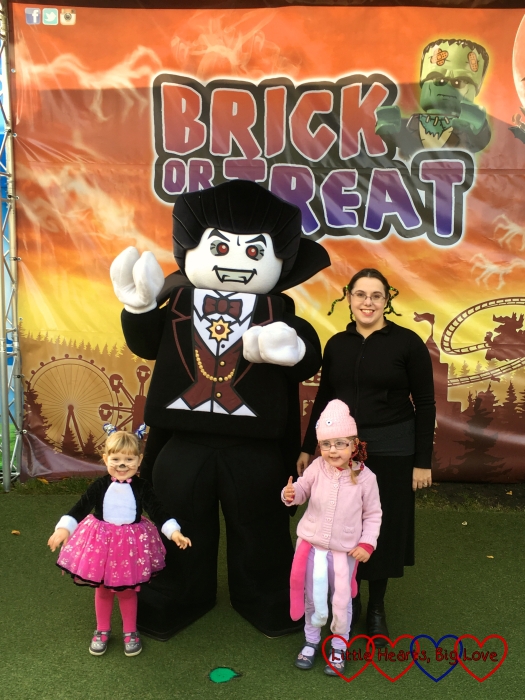 The Enchanted Forest was turned into a spooky forest for Brick or Treat with witches, vampires, skeletons and pumpkins everywhere.  There were also various activities for the children to take part in – we joined in with creating a mosaic tile which became part of a giant Brick or Treat picture, and made a pumpkin from Lego. 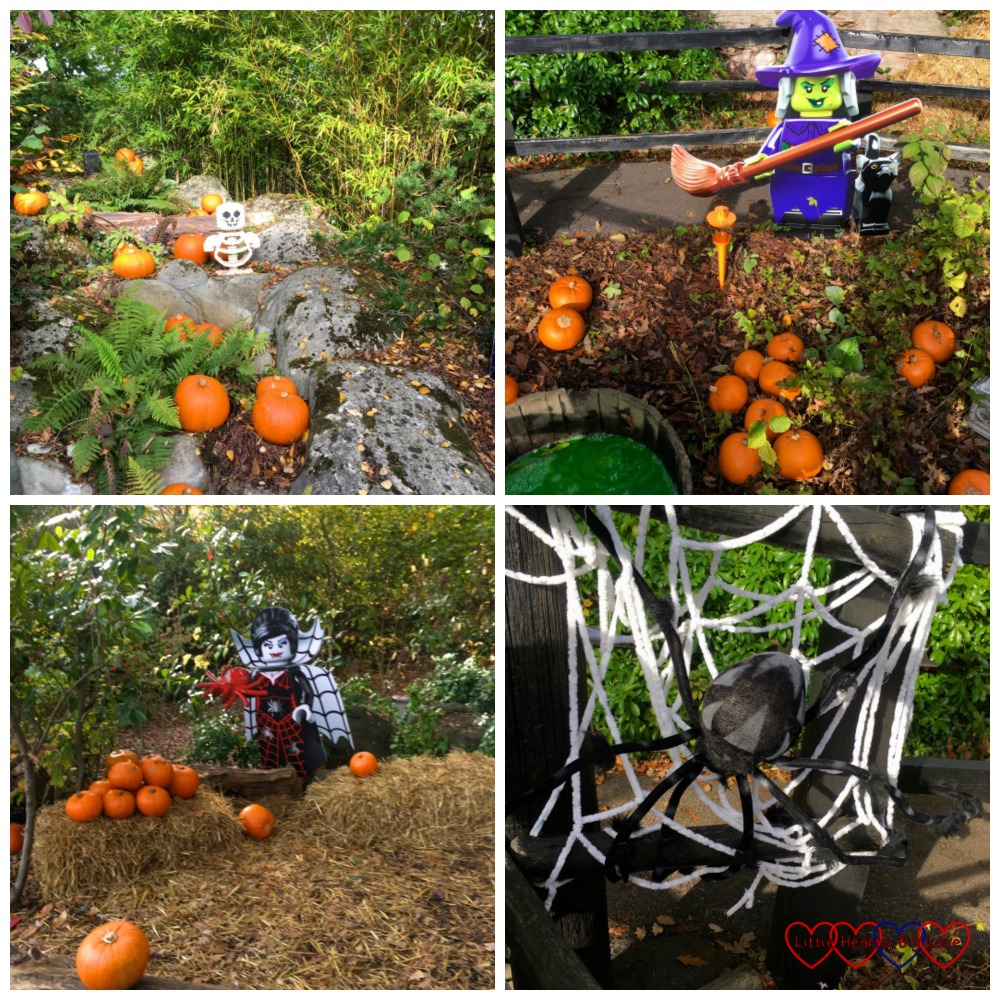 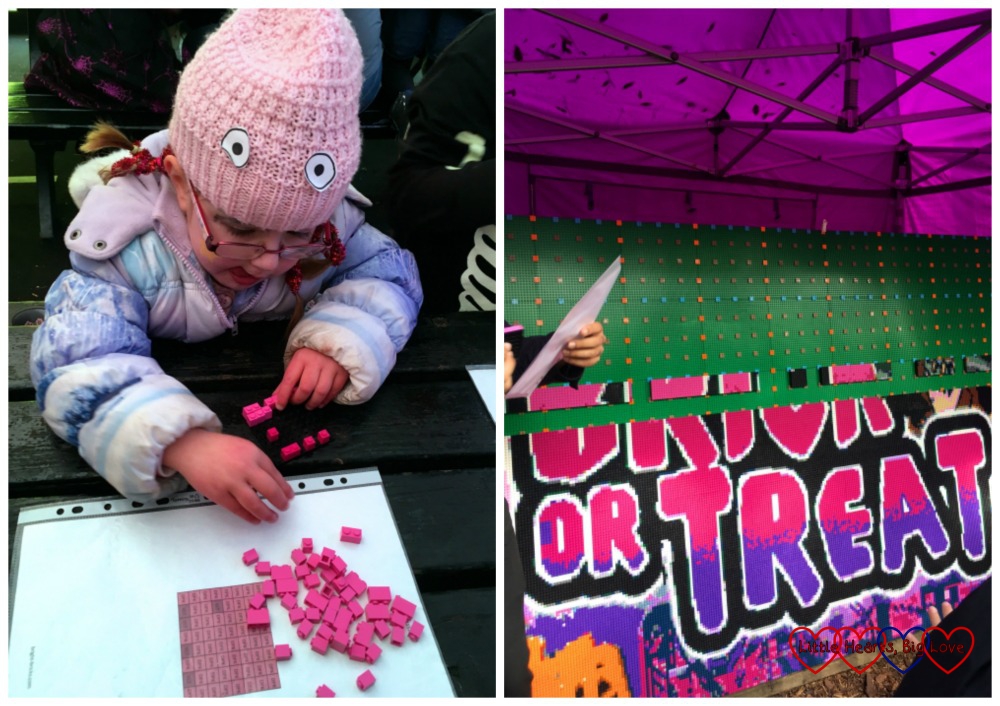 The fancy dress competition was held in Miniland and we arrived early enough to sit on the green and have our lunch before it started.  It was a beautiful warm sunny day – warm enough at one point to shed cardigans altogether – and certainly didn’t feel like the end of October! Waiting for the costume competition gave me my favourite moment of the day – seeing the children getting up and dancing to the music.  At one point Jessica, Sophie, H and E were all holding hands and dancing around in a circle and clearly having the most wonderful time.  It was such a beautiful moment to watch. 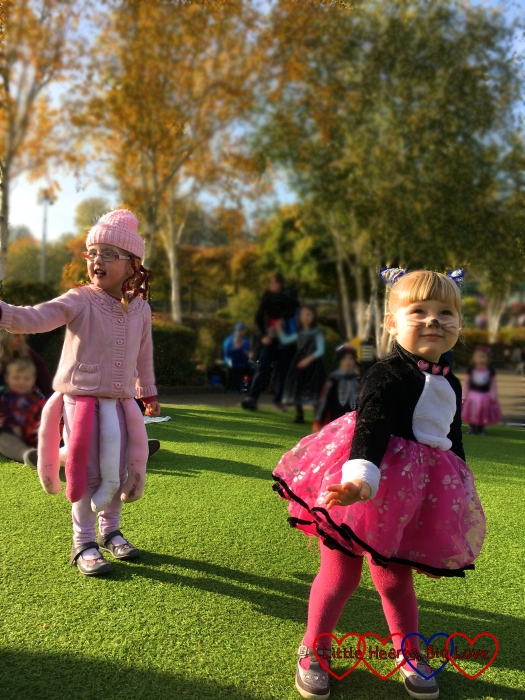 After the competition, we headed over to Duplo Valley for a couple of rides on “the blue train” before making our way further down the hill toward L-Drivers.  As Sophie has just turned three, she was now old enough to go on them for the first time and for once Jessica also wanted to have a go too.  While Jessica was now able to steer her car around the track, Sophie’s steering wasn’t quite so good.  She kept driving into the side of the track and her serious little face as she patiently waited to be rescued each time made me chuckle.  She was very chuffed to get her “ticket” (driving licence card) at the end of the ride though! 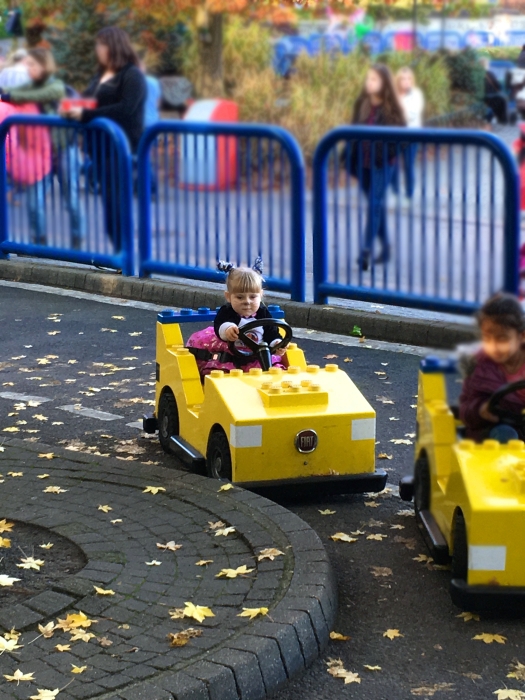 The Thunder Blazer carousel ride is always a firm favourite although the girls were a little disappointed to see that the “spinny cup” had been removed from the ride.  Fortunately, the rocking carriage was still there (Jessica’s second choice) although Sophie preferred to ride a horse instead of sitting in the carriage. 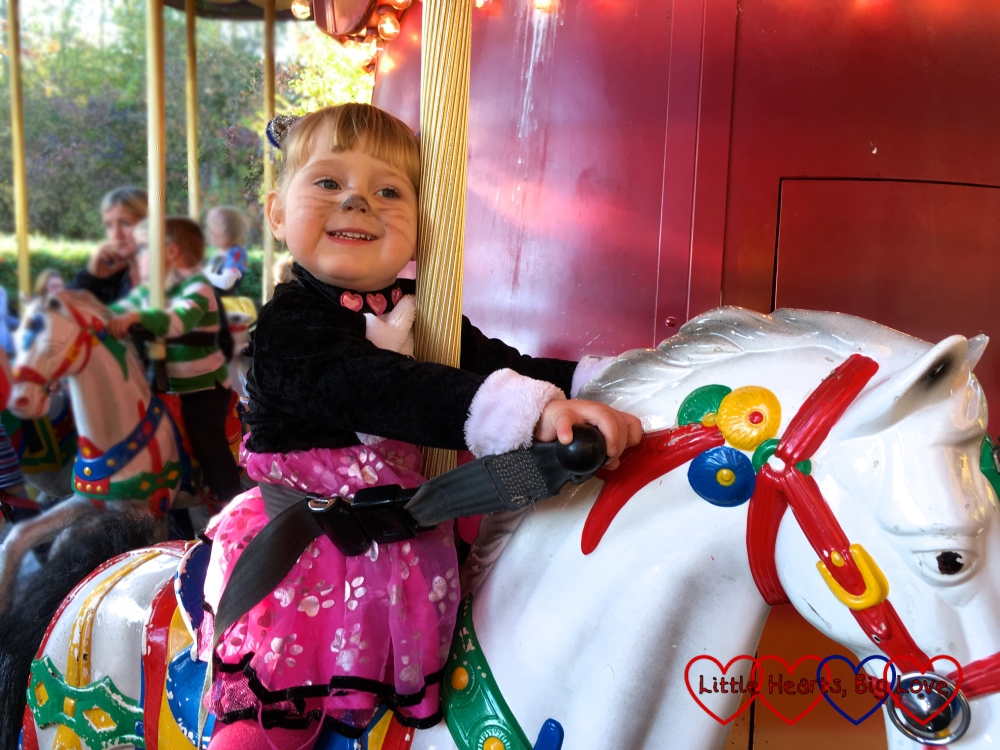 One of my favourite things about Legoland at this time of year is how pretty it is with the leaves changing colour on the trees.  I thought I might miss seeing them this year – last year, they were well and truly past their best by the end of the season, but thankfully this year, the pretty colours were still very much there.  We ended our day with a ride on the Aero Nomad which gives the best view of the autumn colours. 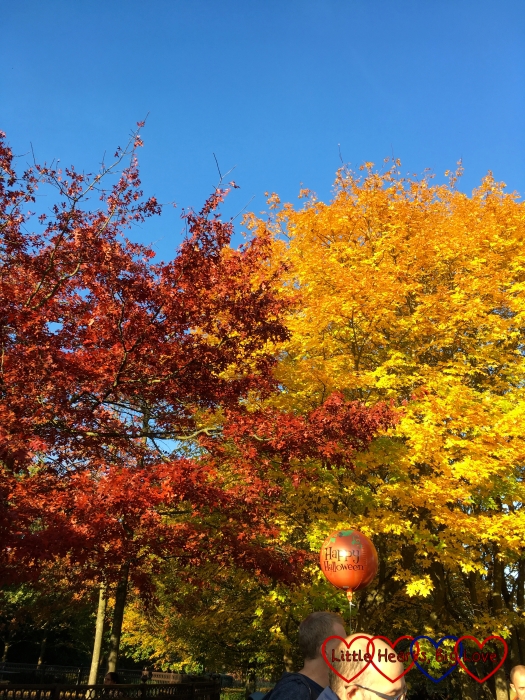 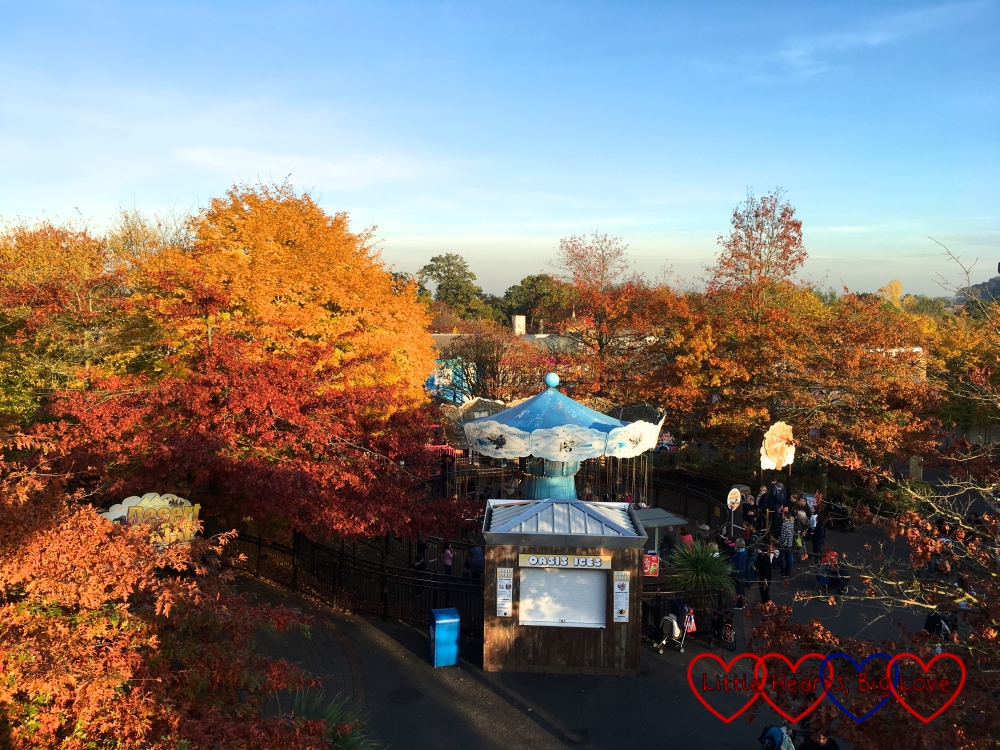 29 thoughts on “Brick or Treat at Legoland Windsor”