Sometimes it’s the simplest things that make for a fun day out. A train journey, a picnic and a visit to a playground. Just being somewhere different.

It was one of those afternoons where we just needed to get out somewhere. I suggested a couple of our usual favourite outdoor places but Sophie wasn’t keen. Then I suggested getting on the tube and finding a park somewhere and her face lit up. 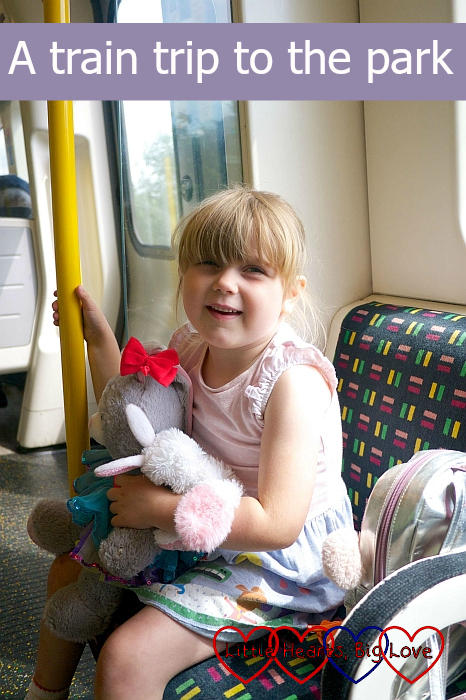 We planned to get the tube from Uxbridge. As it was the weekend, and there was engineering work on the Metropolitan line beyond Wembley Park, this limited our options a little. Looking on Google maps, I spotted Shenley Park which was a short walk away from Ruislip Manor station.

Bus and train rides are part of the adventure on a day out when you’re little and are rare enough for us to make them a bit of a treat. Sophie was very excited as we boarded the tube, asking how many stations we had to count to get there (five) and which station were we stopping at.

Naturally we had to take a tube selfie! 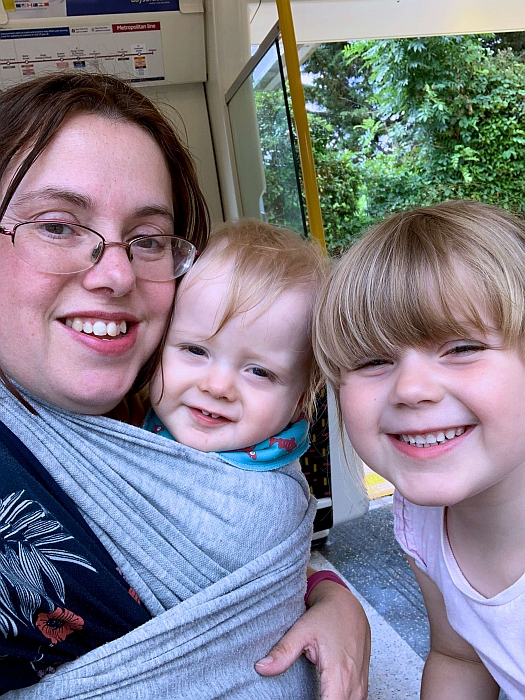 “Mummy you’ll have to put that photo on a cushion,” Sophie said.

After Jessica died, my sister sent us a couple of photo cushions. The photo of one of them is a selfie of me and Jessica on the tube, heading off for a Mummy and Jessica day out together. Happy memories. I like the idea of matching it with a similar photo with her siblings.

We got off the tube at Ruislip Manor and headed over to Shenley Park, just a few minutes’ walk from the tube station. It’s not a very big park, but the playground had plenty to keep Sophie amused, plus there was also an outdoor gym area which is always fun. It was also a lot nicer and in better condition than our local park. 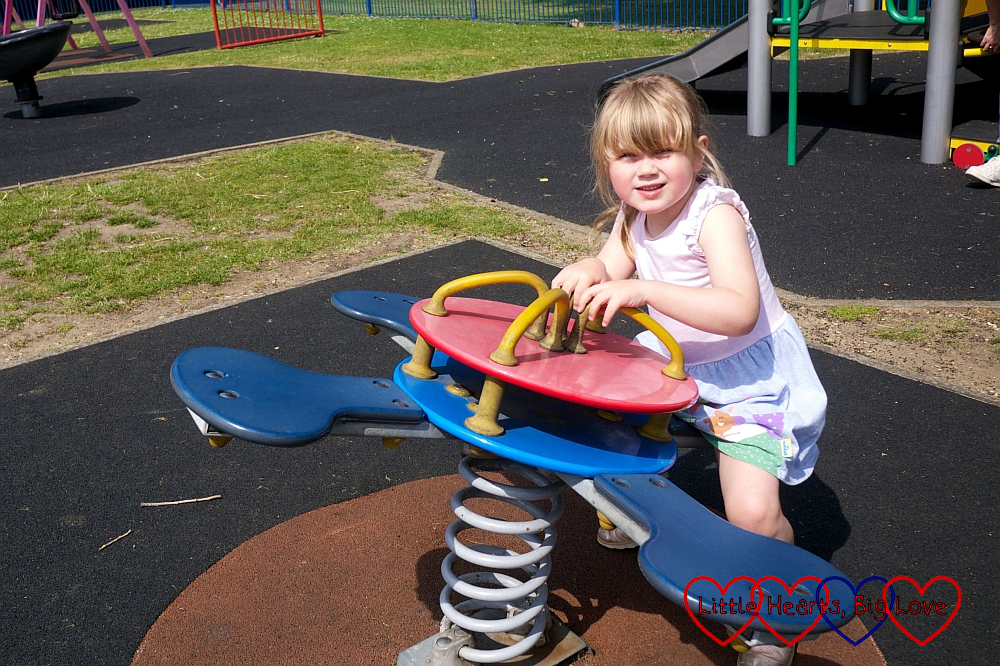 Sophie had brought a couple of her favourite toys – Jessica Bunny and Twinkle – with her. Jessica Bunny was sent to her by some of my blogging friends after Jessica died. Sophie has recently started bringing Jessica Bunny with her whenever we go out. I’m not sure if her attachment to this particular toy is because of losing Jessica, or just that it happens to be a favourite right now. 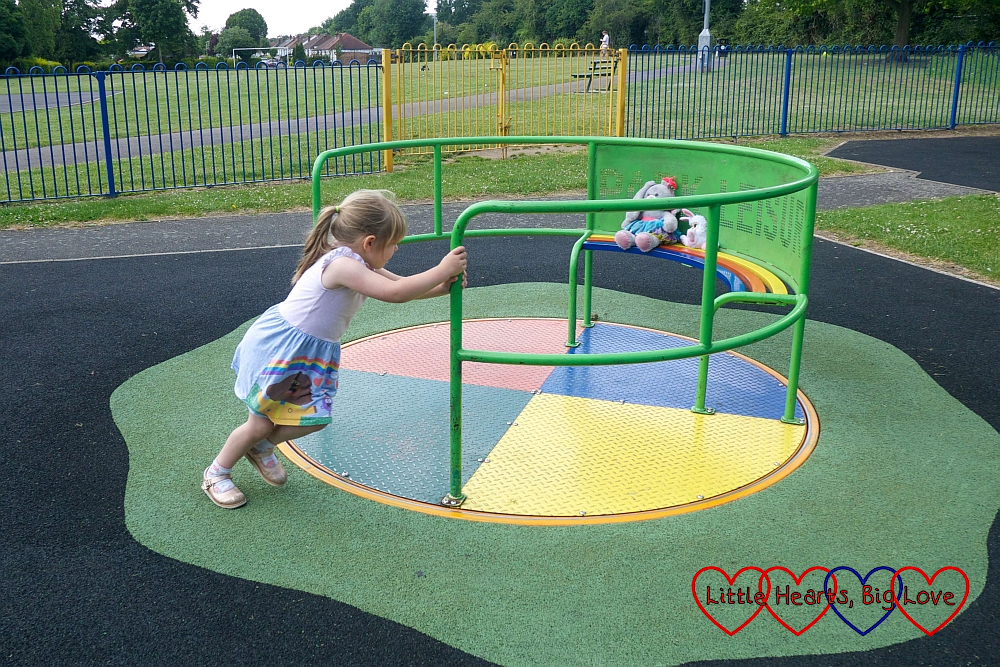 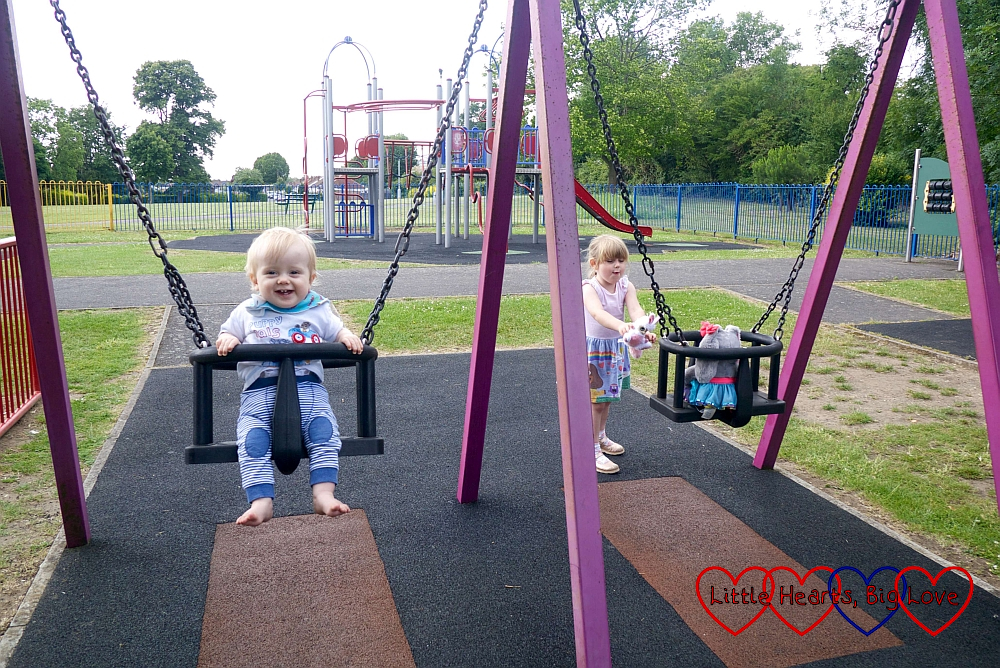 Thomas loves going on the swing. I love hearing his little giggles as I swing him on the baby swing. So adorable. 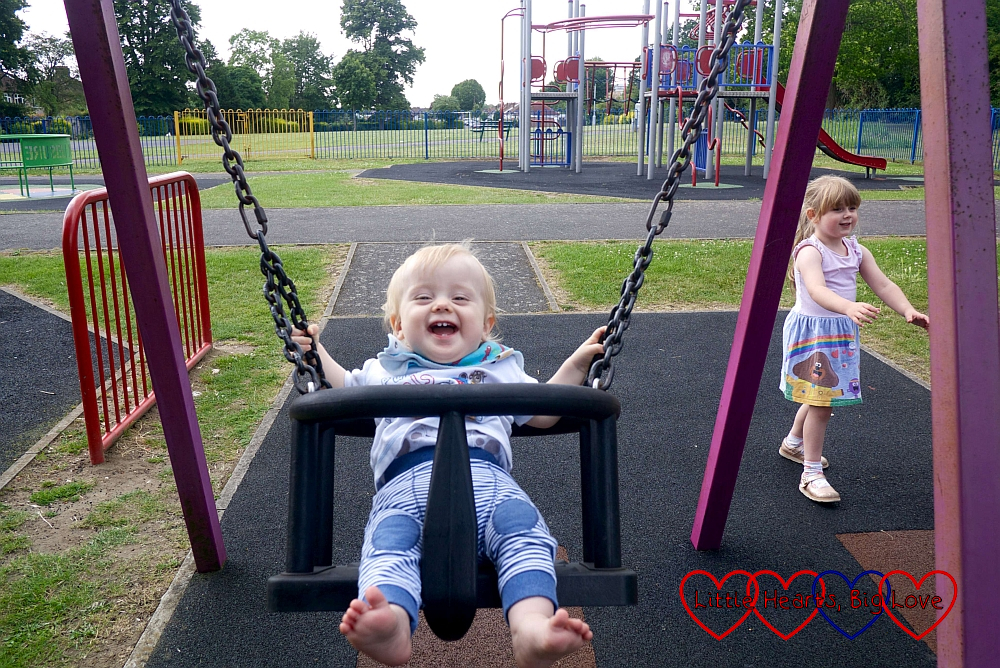 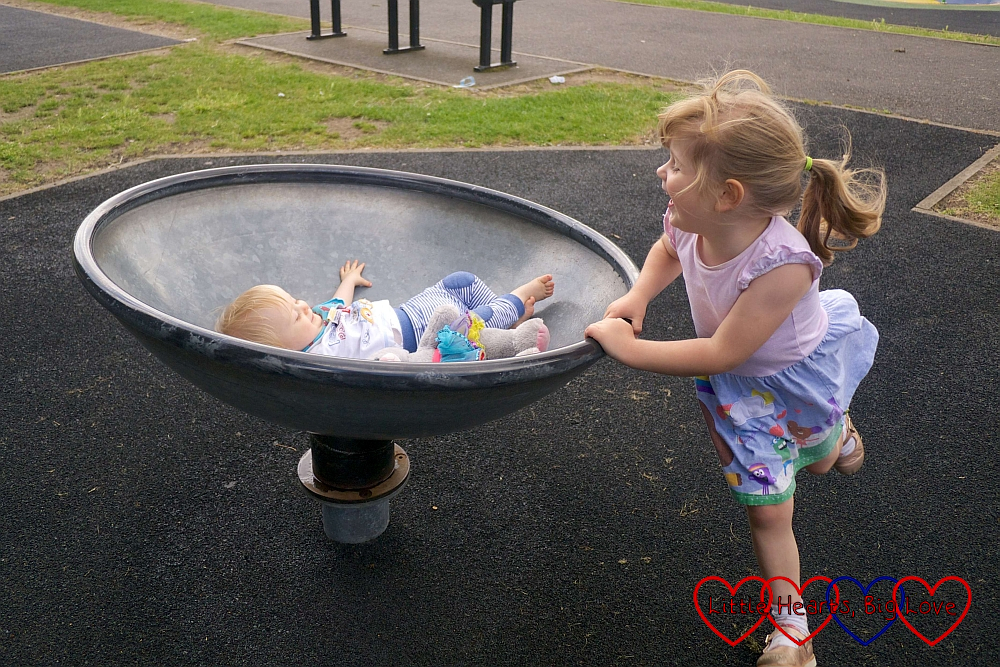 I love how Thomas is also now getting big enough to enjoy more things at the park. He has recently started pulling himself up to stand. The bars on the toddler play equipment were perfect for pulling himself up on. He spent ages standing there spinning the disc around and around. 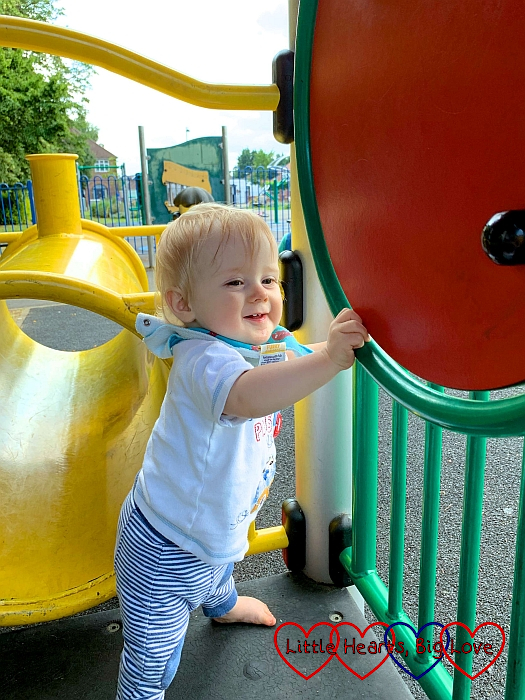 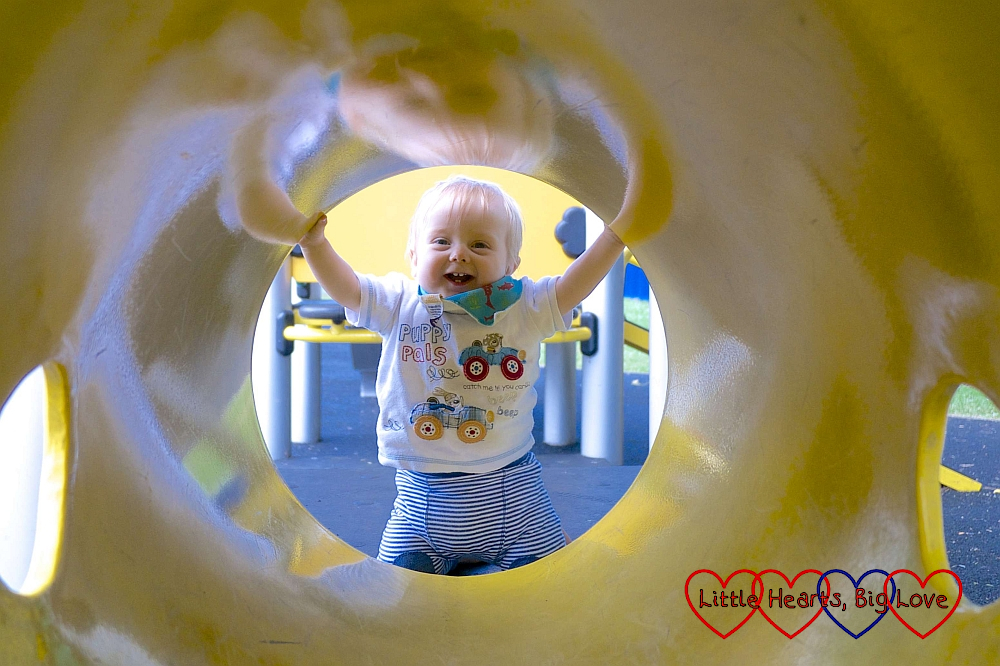 Sophie was quite proud of herself for managing to climb to the top of the climbing frame. She was trying to get across to the slide, but couldn’t quite manage the obstacles in between – the monkey bars were a bit too high and the climbing bit near the slide was a bit too tricky. It was a little too high for me to be able to lift her up as well. She soon found the solution – climbing up the slide and then sliding back down again! 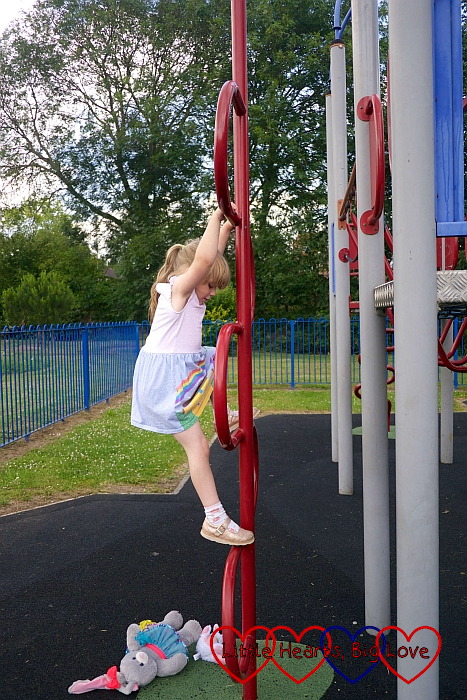 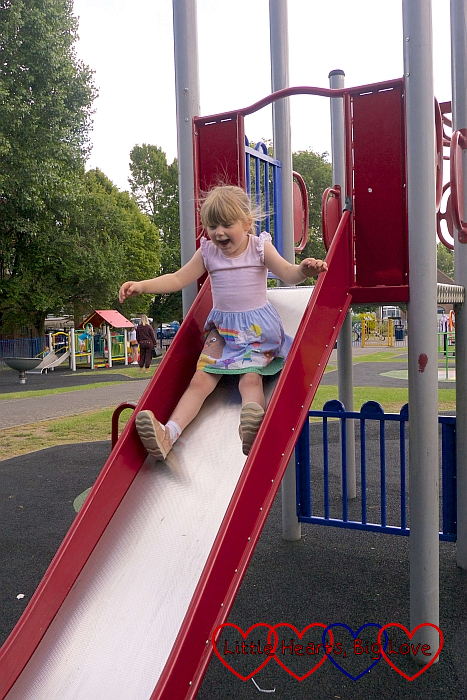 She also enjoyed trying out some of the outdoor gym equipment. 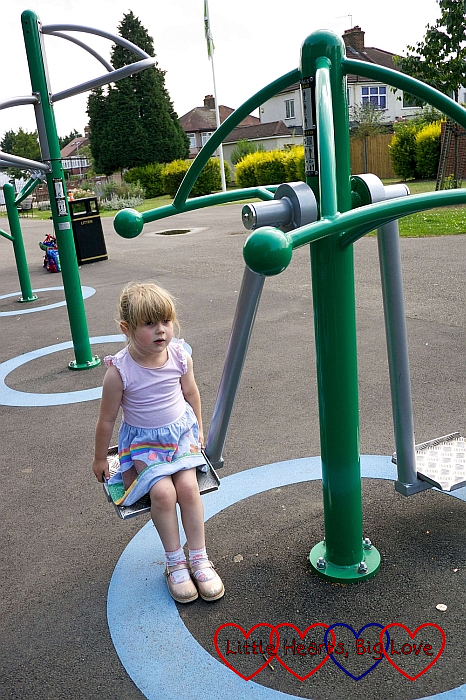 Outside of the play area, there was some green space for ball games and a pretty area with some wildflowers. This was a good place to sit for a while and have a picnic before heading back home. We watched the birds, looked up at the clouds floating overhead and shared what pictures we could see in the clouds. Bliss. 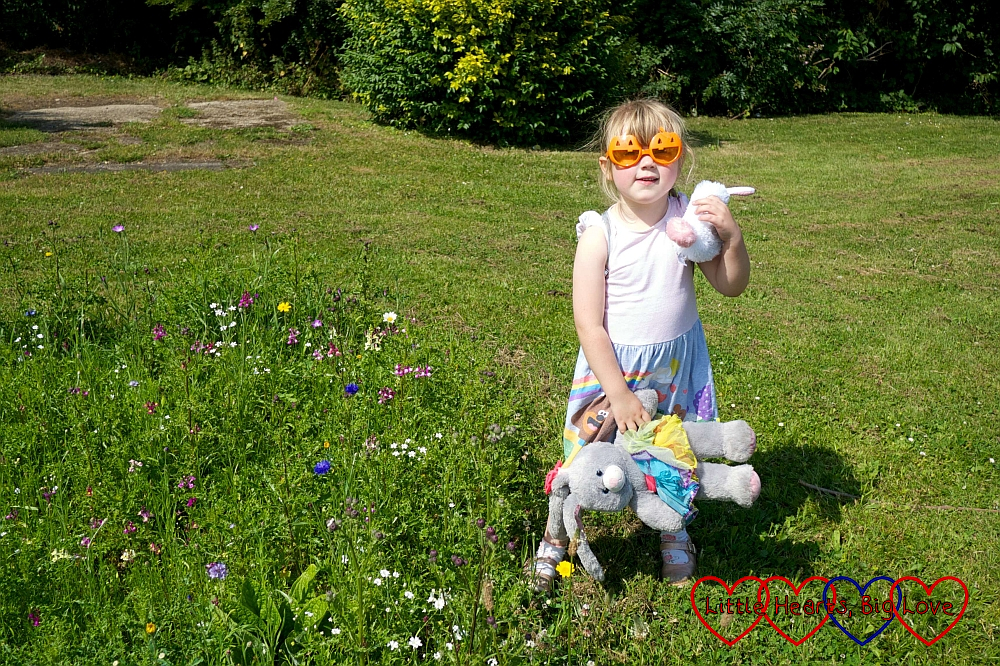 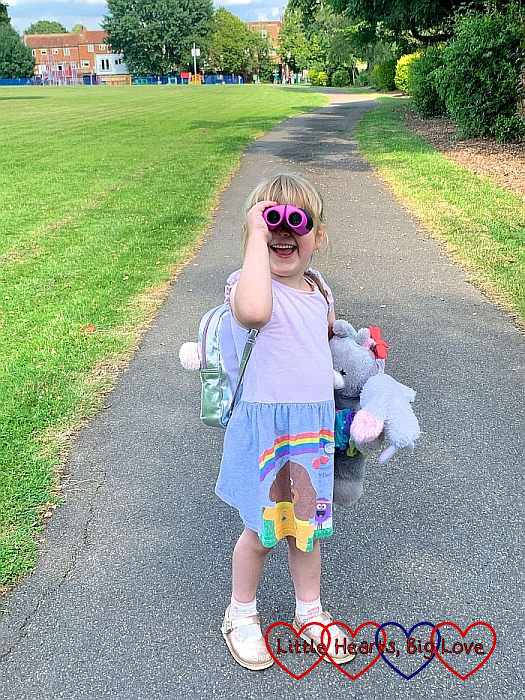 It was just lovely to go somewhere new and enjoy an afternoon out in the sunshine. It was only a few stops on the tube but even a short tube journey was a bit of an adventure. Maybe we’ll venture out a bit further on the tube over the summer holidays.

3 thoughts on “A train trip to the park”