At this month’s Halo group, Sophie was very excited to get to take Walter, the Halo bear home with her. He comes with a little bag, containing his dressing gown, toothbrush, hairbrush – and a bicycle helmet. Naturally, this meant Sophie wanted to get her bike out and take Walter out on it. 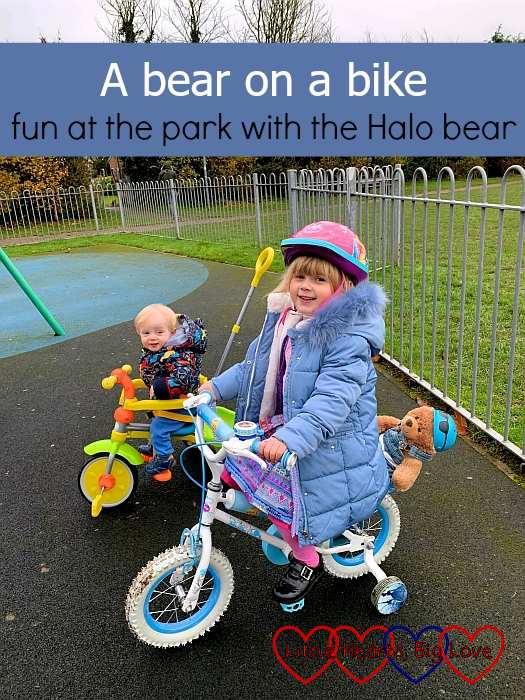 Sophie rides her scooter to school each day, but it’s rare for us to get the bike out. Mostly because I’ve found it a bit of a struggle in the past if we went out and I ended up having to push the bike along, or carry it. The scooter is so much easier. It’s one of the throwbacks of life with Jessica, I think. Jessica tired quickly, and so the odds of me having to carry the bike were quite high. With Sophie, that isn’t the case at all. Besides, she’s quite capable of pushing the bike along herself if she got tired of riding it.

Getting Jessica’s old bike out for Sophie prompted me to get Sophie’s old trike out as well. Thomas is just the right age for this now. His little legs are too short at the moment to reach the pedals, but he loved sitting in the trike while I pushed him along. Much more fun than riding in the buggy! 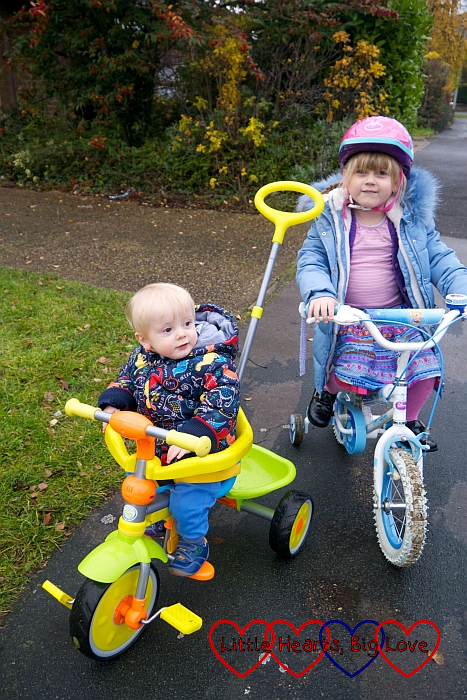 Walter seemed very comfortable in his seat on the back of Sophie’s bike too. 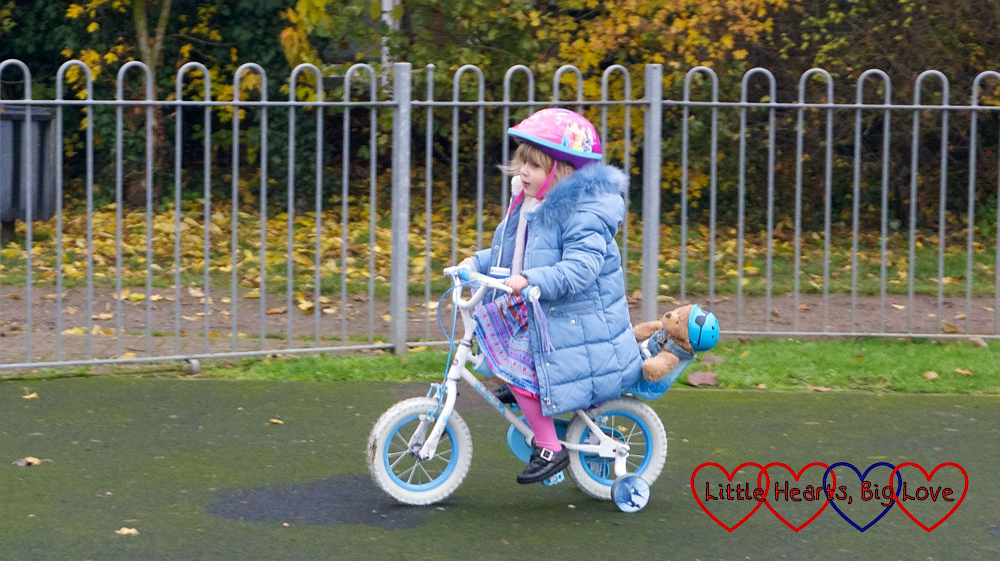 Watching Thomas at the park made me realise just how much steadier on his feet he’s become. He has a bit of tendency to face-plant when walking outside, but now he’s managing to stay on his feet most of the time. There’s still an occasional wobble, but he’s getting better at regaining his balance before he falls over. 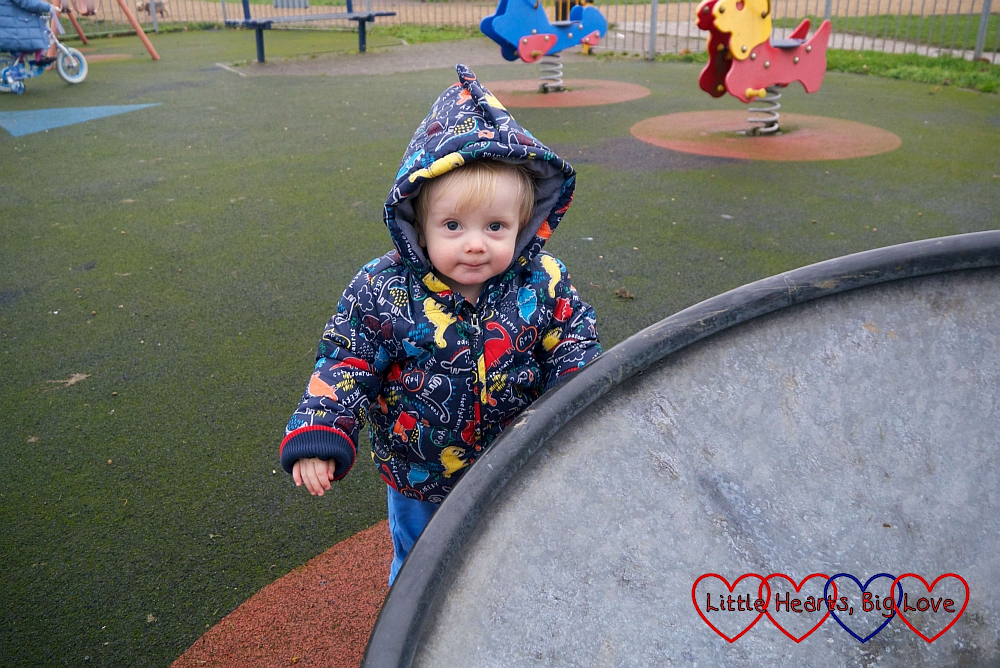 He loved getting to bounce on the trampoline for the first time. Sophie is so good with him. I love how caring she is, and how she encourages him to do new things. She was so sweet standing with him, holding his hands and gently bobbing up and down. 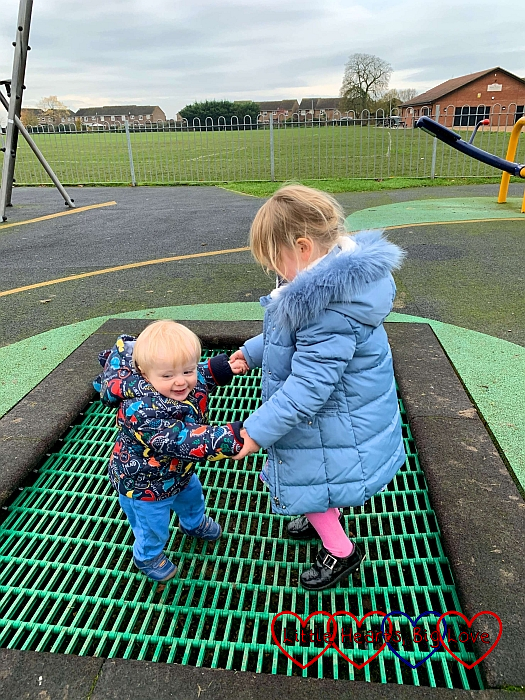 Once Thomas was off exploring elsewhere though, she enjoyed being able to jump around a bit more! 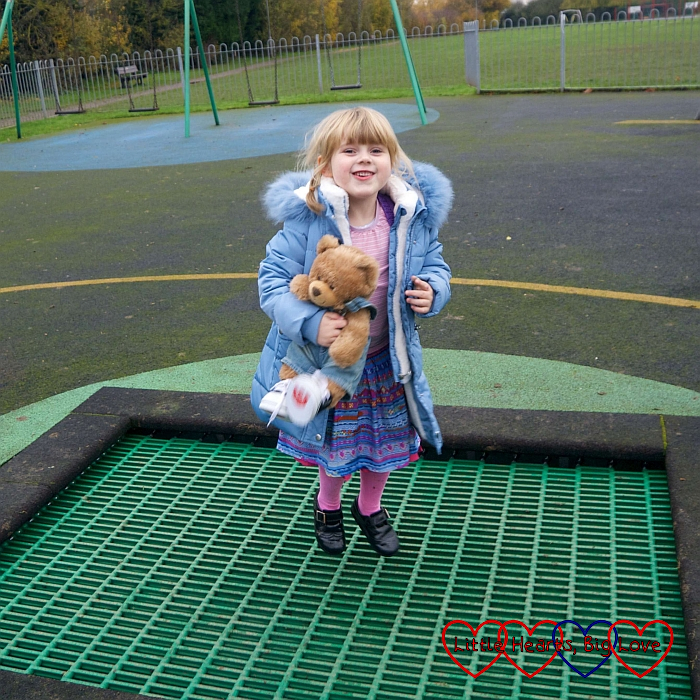 I love how much fun the children have doing something as simple as just going to the park. Having Walter there to share the fun made it even better. It was lovely to watch Sophie’s joy at getting to ride around with Walter on her bike, and to watch her pushing him on the swings. He even got to have a little ride with Thomas – although admittedly Thomas spent most of the time trying to pull Walter’s helmet off! 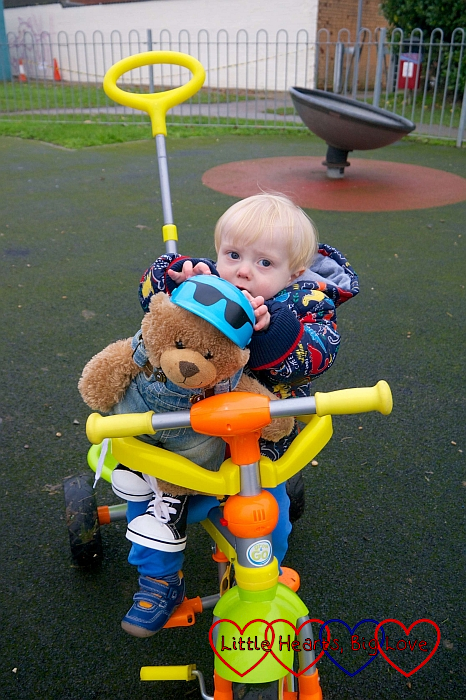 The nice thing about having the Halo bear is that we get to have him for a couple of weeks, and it feels less pressured than having a class bear for a weekend. Like everything else at Halo, it’s about trying to make happy memories and simple childhood fun at the park is a perfect way to make those memories. It was also a good way of encouraging me to get Sophie’s bike out for her. It made me realise that it really isn’t such a struggle after all to go on a little bike ride to the park. We really should do it more often. 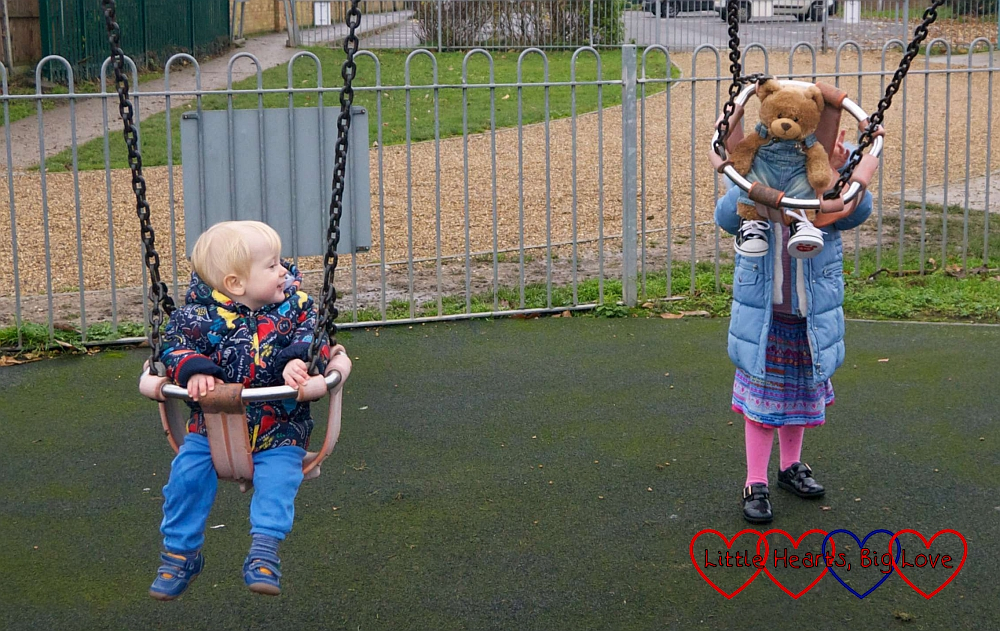 5 thoughts on “A bear on a bike: fun at the park with the Halo bear”