Happy Easter everyone! Lent is now over and this year’s 40acts challenge has come to an end, although as with last year, the daily challenges have left me with quite a lot of food for thought and I’ll be taking some of them on board through Easter and beyond. 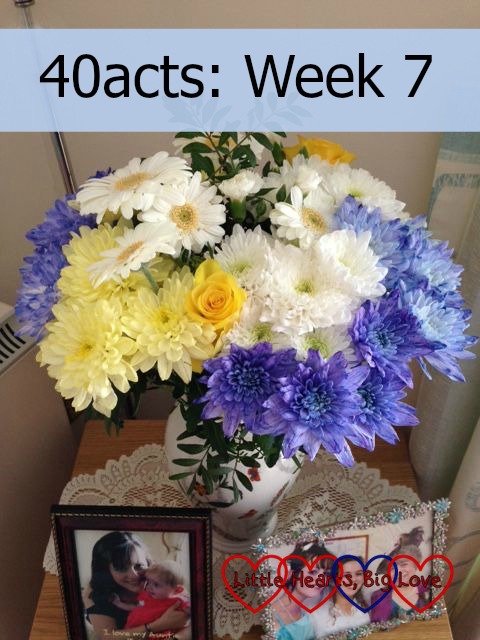 The challenges for this week have been:

Some of the challenges have been a little harder to complete through being on holiday – tackling a domestic chore that I usually avoid or allow someone else to do being a particular example and my way of completing this particular challenge was to allow hubby to stay in the hotel room with the girls on arrival whilst I went back out to the car to get some of our luggage – usually I stay with the girls and let him go back and forth to the car.

For me, the most challenging of this week’s acts was the first one – biting my tongue. Those harsh words slip out all too easily when I’m tired or hungry and it took a few attempts at taking a deep breath and counting to ten before I did manage to hold them back. This is definitely a challenge that I want to take forward as I’m aware that self-control over my own tongue is something that I struggle with.

I also struggled a little with writing off someone else’s debt that they owed me, including with regards to letting go and forgiving someone for something. I remember a similar act last year all about forgiving someone and wiping the slate clean which I did find quite challenging. There have been a couple of people in particular this past year I have found hard to forgive for past events but when thinking about the act for this year, I realised I have forgiven them both and made peace with it all. It’s always good to be reminded to let go and move on though.

Taking the time to send some encouraging words to friends who are having a tough time is something to definitely not just do during Lent, but all year round and so Act 37 is another one that I will definitely be carrying forward. I shared a couple of blog posts for Act 38 – my struggle to bond with my second baby and a post reflecting on the day we became heart parents as I think reading something similar to these would have helped me at various points on those particular journeys.

My favourite challenge this week was the final one – an over-the-top anonymous generous act and as this one involved keeping the generosity well and truly undercover, I won’t be sharing any more details.

Of course, just because Lent is now over doesn’t mean that the generosity challenge has to end with it – as with last year, I’ve been left with a few ideas of things that can be continued throughout the rest of the year. The challenge to break some bad habits – such as being late and letting those harsh words slip out – is one that I will definitely be taking forward. Switching off my phone a little more often and stepping away from the world of social media is another that will linger and I quite like the idea of the occasional moment of handing out free chocolate for #ChocolateTuesdays!

Did you take part in 40acts? I’d love to hear about how you got on with the challenge.