Last week, Sophie took part in her first (and last) sports day at preschool. She missed out on sports day last year as it clashed with one of Jessica’s hospital appointments. This year, she was very excited about taking part in sports day. 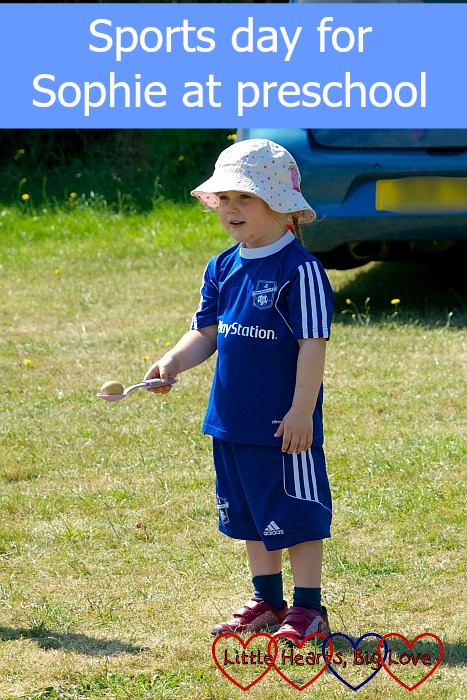 It was a very warm morning. Thankfully there was a bit of a breeze across the school field where sports day was being held. I’d learned from previous experience at preschool sports days and made sure I brought a fold-up chair with me. Much more comfortable than having to stand and watch, or sitting on the grass! 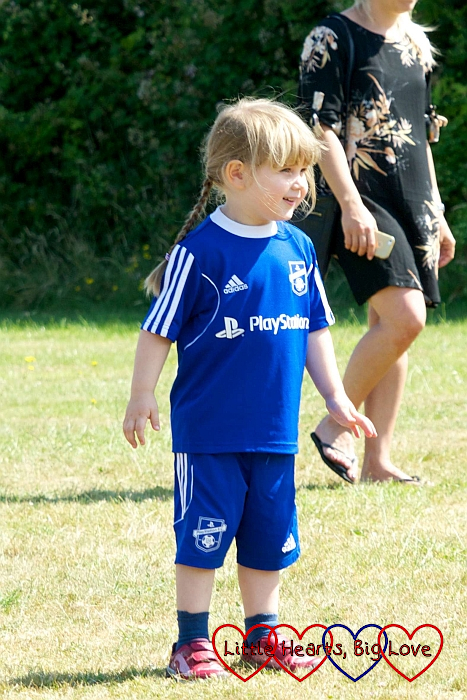 Sophie was in the first group of children for the running race. They hadn’t quite grasped that they needed to wait for their teacher to blow the whistle before starting. Most of the children (Sophie included) started a little too early. Sophie was the first across the finish line before she realised that she needed to go back to the start! I think she got confused by having to restart the race though. It took her a few seconds after the teacher blew the whistle to grasp that she needed to run the race again. This time, she ended up finishing last. 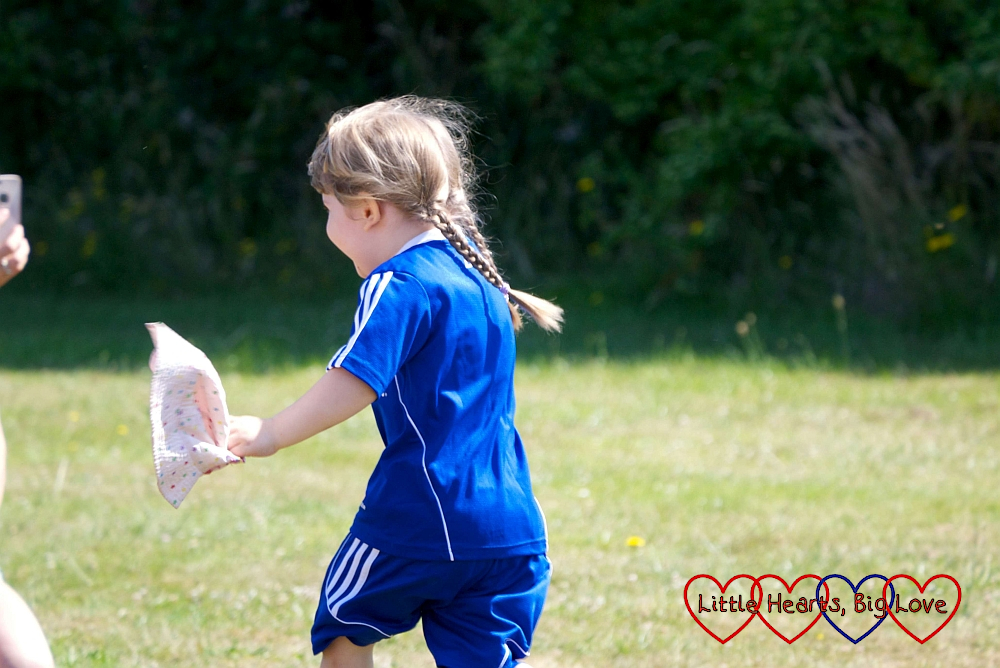 The egg and spoon race was next. This time Sophie managed to start properly. She managed to make it to the finish line without dropping her egg (holding on to it with the other hand helped there!) and was first across the line. I loved the way she did a little victory dance at the end and jumped up and down with glee when she realised she’d won the race. 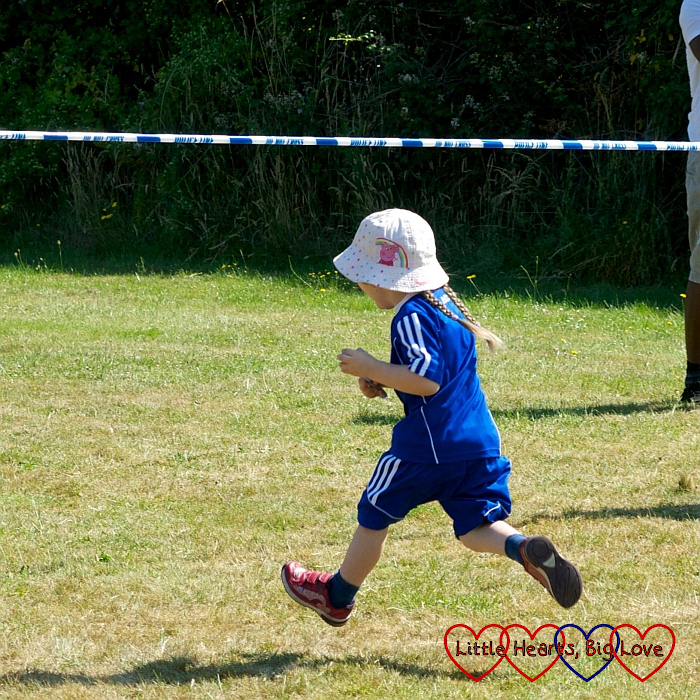 Next up was the obstacle race where the children had to crawl through a pop-up tunnel. While the breeze was very pleasant for everyone watching, it did make this race a little more challenging as the tunnels kept being blown further down the field! Sophie didn’t manage to win this time, but she wasn’t last either. 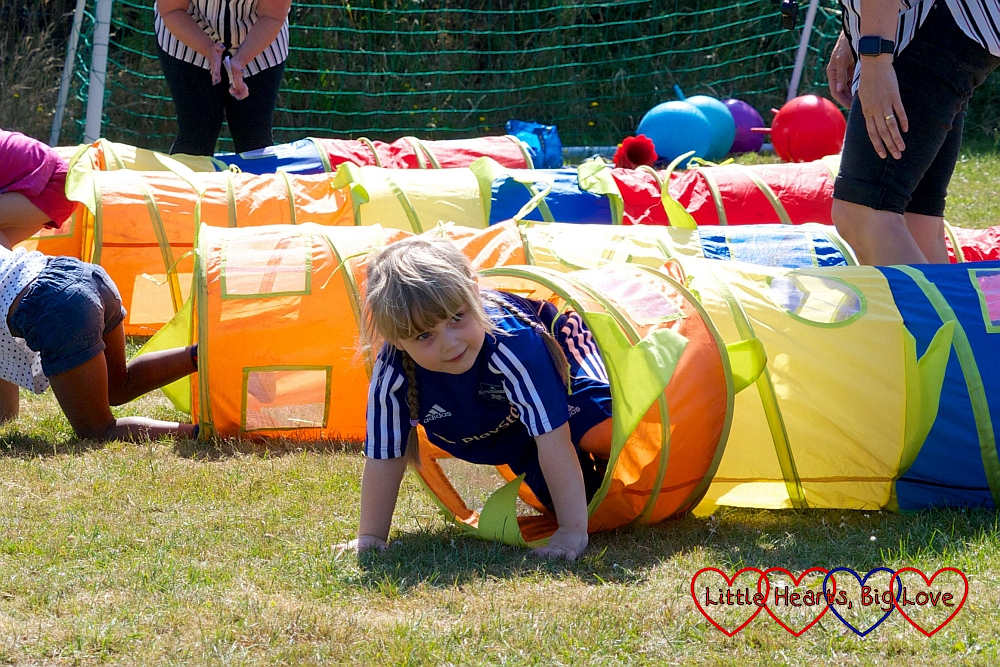 The final race was the “bin bag” race as Sophie kept calling it where the children had to balance a bean bag on their heads. I think all of them ended up just holding the bean bag in place though! Once again, Sophie was the first to cross the finish line and made me laugh with her little victory dance.

The last event was the tug of war. Sophie’s team managed to win their heat easily – mostly I think because the other team hadn’t quite worked out what they needed to do! 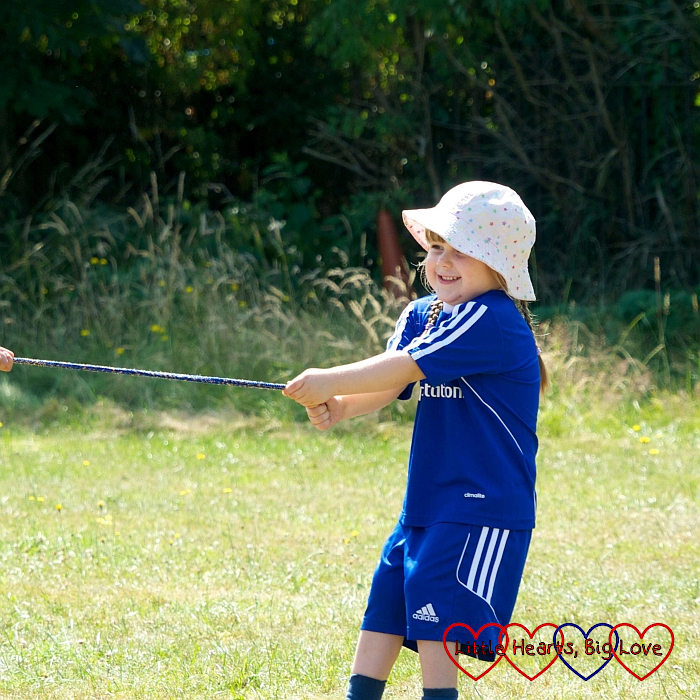 After all the events had finished, the children all enjoyed an ice lolly before being given their medals. 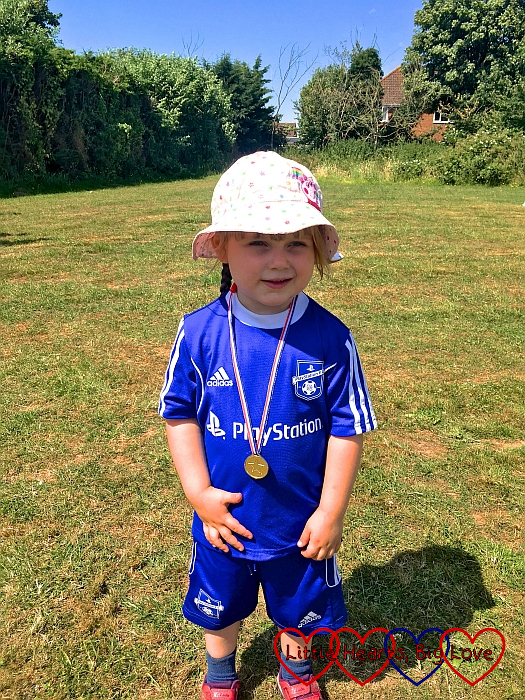 Watching Sophie taking part in sports day brought back so many memories of watching Jessica’s preschool sports days. Jessica never managed to win any of her races. She always finished a long way behind her friends but for her, the joy of it really was in just taking part. I was so glad that this was also the case for Sophie. It was lovely to see Sophie win some of her races, and I adored her little victory dance, but that smile on her face was just as big whatever her finishing position.

19 thoughts on “Sports day for Sophie at preschool”