The bags were packed, the T shirts had been printed and we were ready to start our JoGLE for Jessica. First of all though, we had to get to John O’Groats and the start of our JoGLE journey. Getting to the start point was an adventure in itself with six trains and one bus needed to get us there. 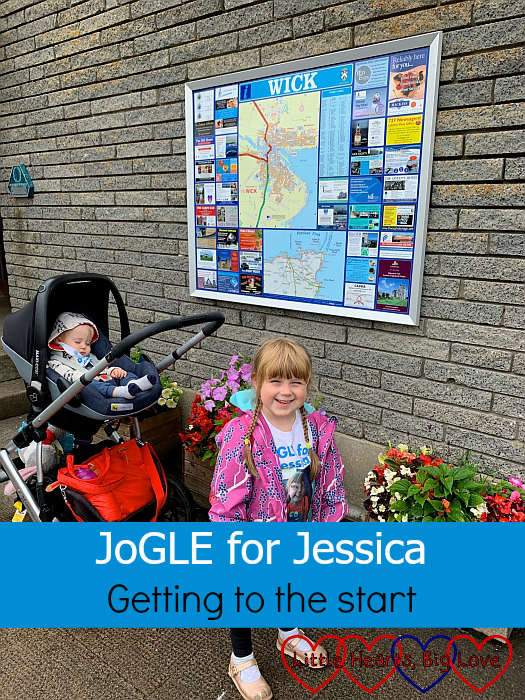 We took an earlier train than the one we had originally planned to take as we realised we would be cutting it a little tight to get from Paddington to King’s Cross. It wouldn’t have been great to miss a train so early in the journey! It’s just as well we did as the journey on the Circle line was quite a slow one. Sophie likes to ask how many stops there are on train journeys so hubby had printed out a list of all the stations we would be stopping at on each of the train journeys. This kept her occupied for the first train ride and the tube to King’s Cross but she lost interest after that! 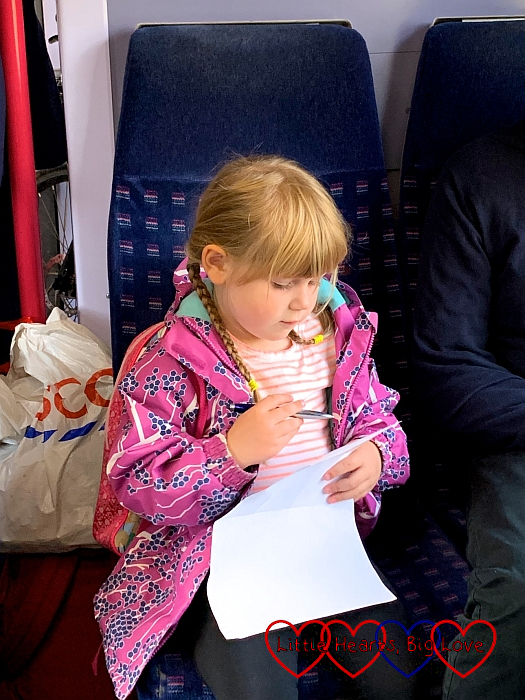 We arrived at King’s Cross with plenty of time to spare and were soon on our third train of the day. We’d treated ourselves to first class for this journey as it was a longer one. It meant having more room, and refreshments included in our ticket price. Space and food go a long way when it comes to keeping everyone happy!  We had reserved seats but two were together and the other two were split across the carriage. Fortunately we were able to swap seats and sit together though. 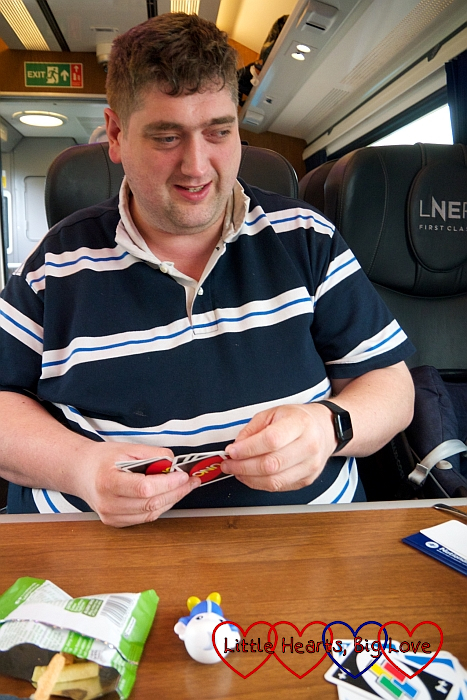 Keeping Sophie amused on the train was much easier than keeping Thomas occupied. Sophie was happy with the iPad, colouring books and several games of UNO.  Thomas was not so easily distracted and toys, food and mummy milk only worked for so long. What he really wanted to do was crawl about, pull himself up on the seats and cruise around the carriage. And play with the bin – if only Mummy didn’t keep standing in the way and stopping him. Travel with a 5 year old and 12 month old was, as we’d expected, much harder than with a 4 year old and 2 year old. There was a lot of walking up and down the carriage with Thomas, trying to keep him happy! But it was all quite manageable and we were thankful for having the extra space to do so. 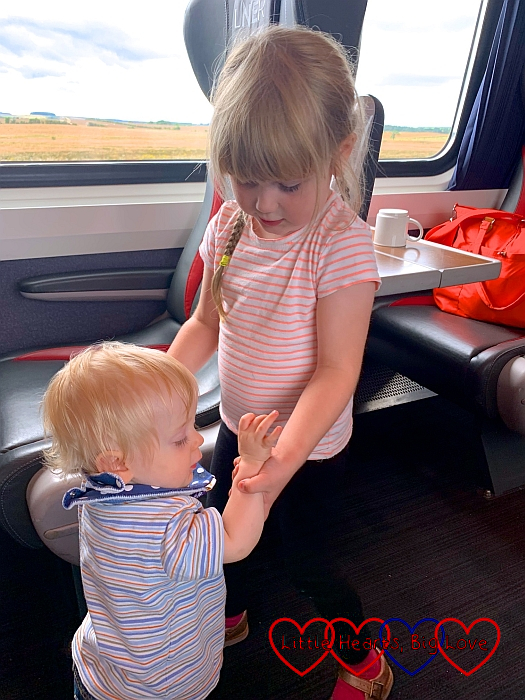 We had a slight panic at Newcastle when there was an announcement that we weren’t able to go any further north at present due to power problems. The train was already running five minutes late at this point and we had a twenty-minute window to transfer trains at Edinburgh. I quickly started looking up alternative routes to get us to Inverness and the extra costs involved. There were a couple of later trains that could get us there. Thankfully though a few minutes later, we were on the move again and managed to catch up some of the time.

We made our connection at Edinburgh with a few minutes to spare. Next stop – Perth. Last time this was the most stressful train journey for us. A packed commuter train with two very tired little girls and hangry parents. This time though, we had been well fed on the train, it was earlier in the day, we hadn’t had such a early start and the train was much less busy which made for a much nicer journey. I’d rather have had the stressful journey and Jessica still with us though.

Passing a funfair was another reminder of that previous journey. We’d passed one last time too. I’d pointed it out to the girls. Jessica hadn’t been quick enough to look out of the window and got quite upset about missing it. I decided not to say anything this time although Sophie did spot it. She asked if we could stop and visit it on the way back. Sadly that wasn’t an option but we’ve already ticked ‘go to a funfair’ off the summer activities list so she was quite accepting of the decision to give it a miss.

The train from Perth to Inverness was very busy. There had been cancellations earlier in the day due to flooding at Carrbridge. This also caused delays for us getting to Inverness. We did all manage to get seats (with Thomas on my lap) but were split across the train. Thankfully Thomas had a feed and then slept through this journey. It would have been hard work if he’d wanted to be on the move! 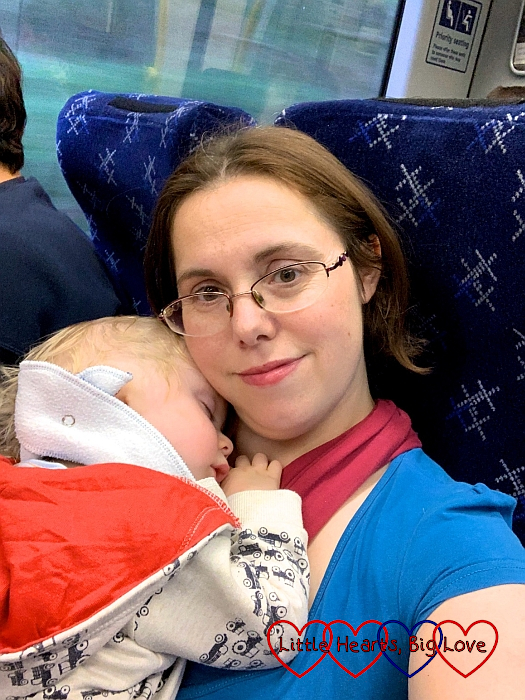 Once at Inverness, we had a 15 minute walk to our hotel – The Beaufort Hotel – which was excellent. A lovely comfortable family room and the food was superb. They were also happy to print off our LEJoG validation forms which I had forgotten to do before leaving the house that morning. Five trains down, one more train and a bus journey to go! 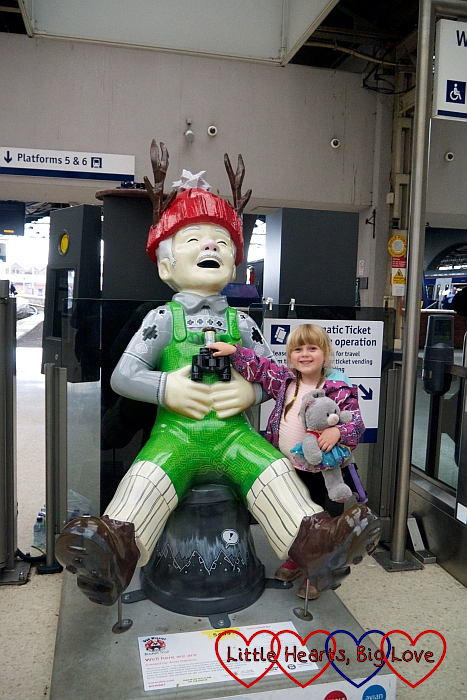 We had an early start the next morning to get the 0700 train to Wick. The hotel reception staff were just arriving as we left. We stopped at “the M” (as Jessica used to call it) to pick up coffee and breakfast before getting on the train. 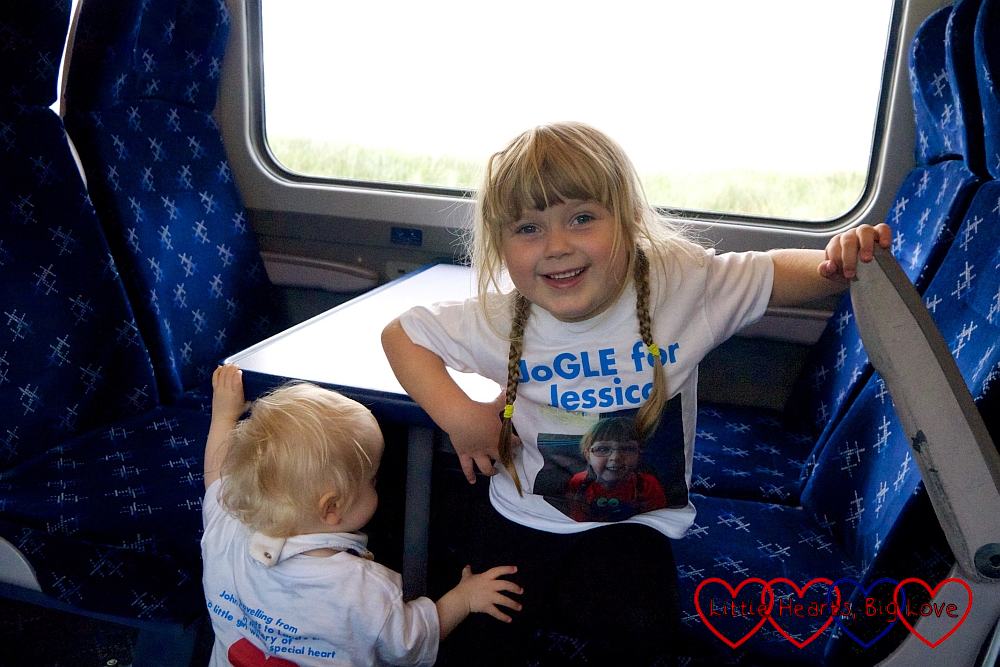 The space for bicycles and wheelchairs was empty during the journey.  This gave Thomas a nice big space to crawl about and sit and play with his toys. Sophie did a great job of helping keep him entertained. She also found the cycle racks quite good for practising limbo dancing! 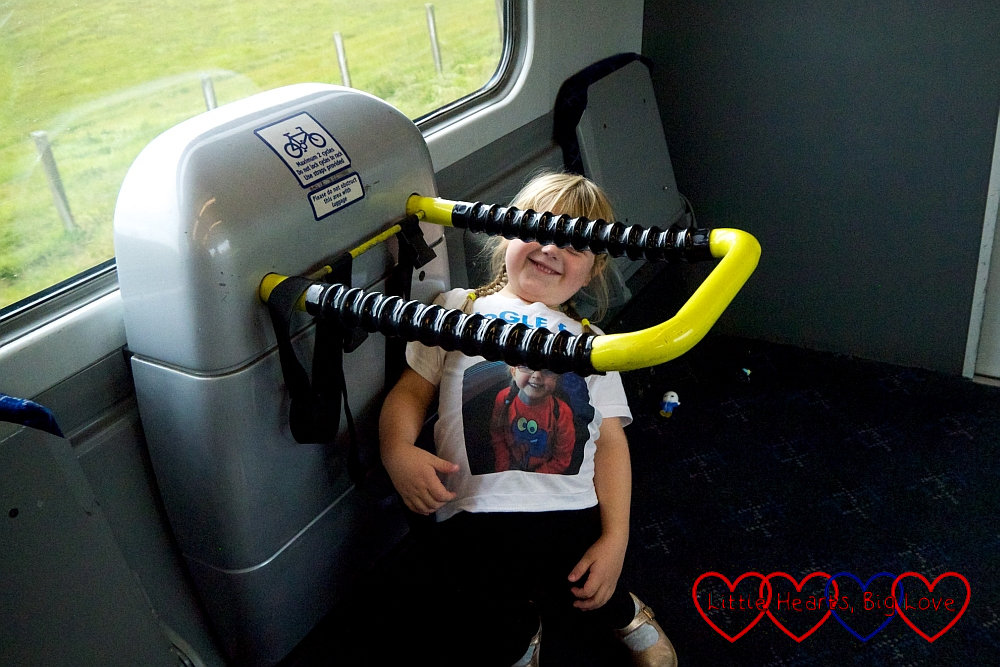 Wick is home to the world’s shortest street – Ebenezer Place – which is 2.06m long. 1 Ebenezer Place is part of Mackays Hotel and is opposite the road leading to Wick Station. We stopped for a photo in front of 1 Ebenezer Place and then at the Bridge Street café for cake and coffee before it was time to get the bus to John O’Groats. 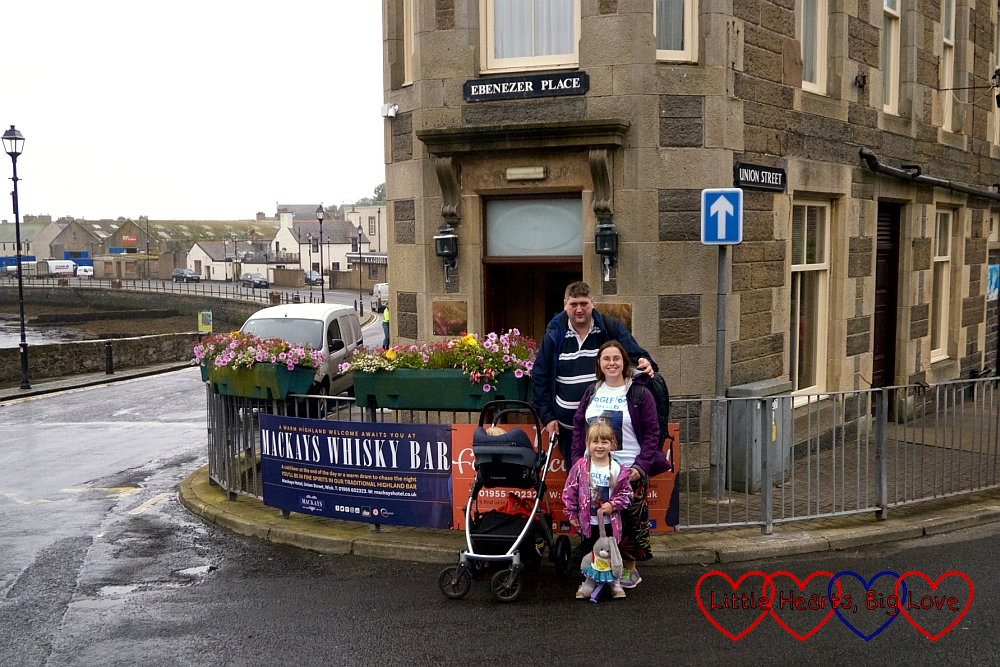 Sophie seemed a bit sad and subdued on the bus. She told me that she was wishing her toys could come alive and that Jessica-Bunny could talk to her. We sat quietly together and had a little snuggle. I’m not sure if Sophie was subconsciously remembering our last journey to John O’Groats and missing her sister a little more as a result. I know I was certainly wishing there could have been another little girl sitting with us on the bus. That we could have been doing our JoGLE with Jessica rather than for her. A JoGLE that was now about to begin. 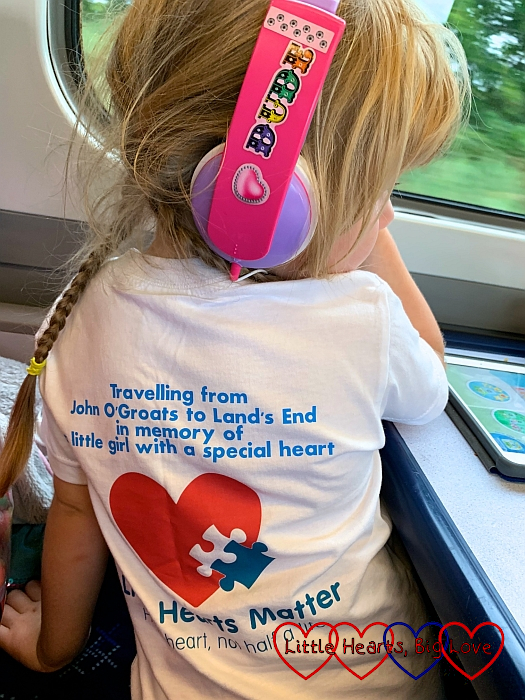 2 thoughts on “JoGLE for Jessica – Getting to the start”