Over last week or so, the girls have enjoyed taking part in four different Easter egg hunts.  The Cadbury’s Easter Egg hunt at Cliveden was their third one of the Easter weekend. We’d already enjoyed egg hunts at Chiltern Open Air Museum and a very small one in our garden at home on Easter Sunday. It didn’t make the girls any less enthusiastic about hunting for Easter eggs at Cliveden though! 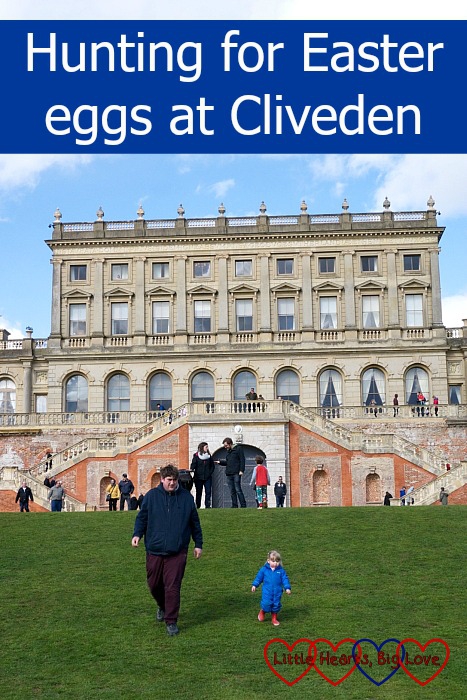 Cliveden has been on my list of places to visit for a while but this was the first time we’d actually been there. It certainly seemed like everyone else in the local area had had the same idea as us as it was very busy! Thankfully parking was fairly easy as the car park was being well controlled.

Our first port of call was the Information Centre to buy an Easter egg trail map, which cost £3. We passed one of the eggs on the way there so that was one ticked off our list before we’d even started following the trail!  Jessica was fascinated by the big inflatable Cadbury’s egg outside the Information Centre. She was a little disappointed that it had gone by the time we finished our trail. 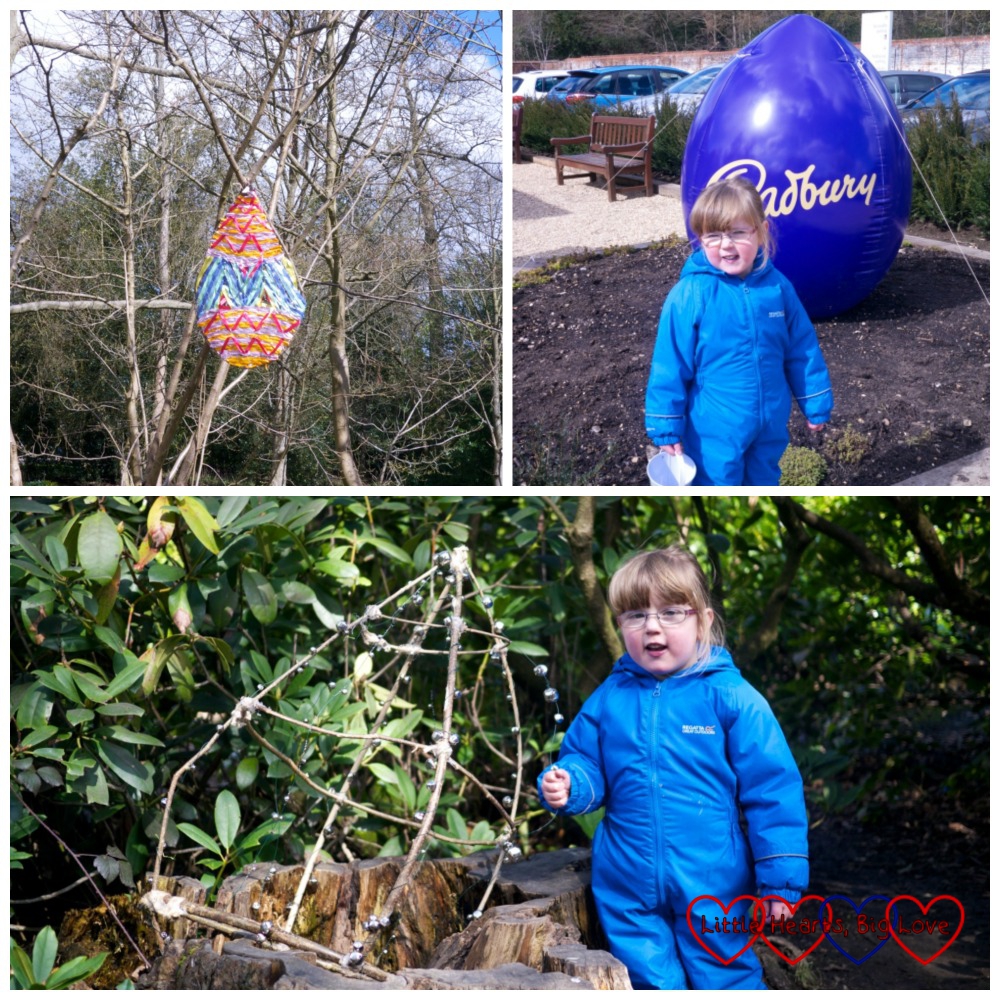 We found the first egg on our trail just outside the Information Centre. This egg was made out of sticks with bells attached. The girls both enjoyed giving it a gentle shake and listening to the sound of the bells.  We headed towards the very pretty Fountain of Love where we found the next egg. The girls had fun splashing in the big puddles found along the way! 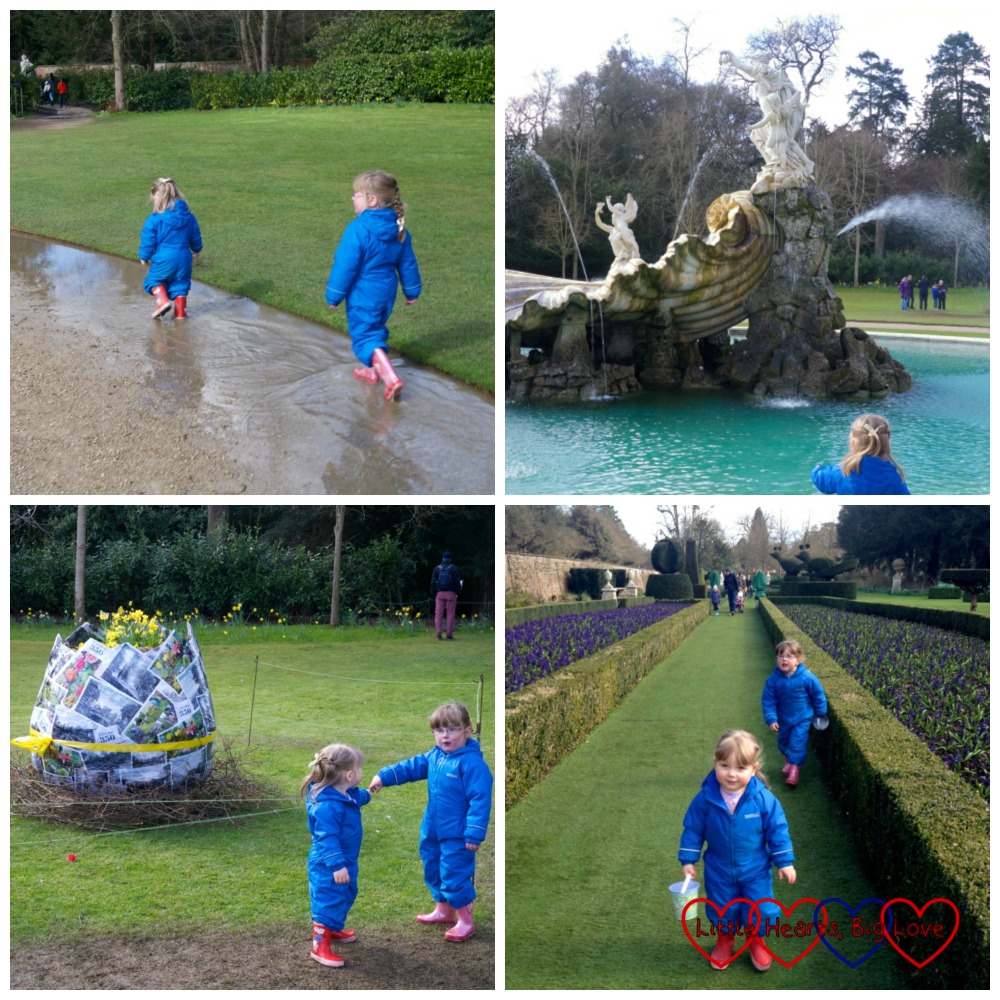 From the fountain, the trail took us through the Long Garden. This was the perfect location to stop and grab a family photo for the monthly Me and Mine project. 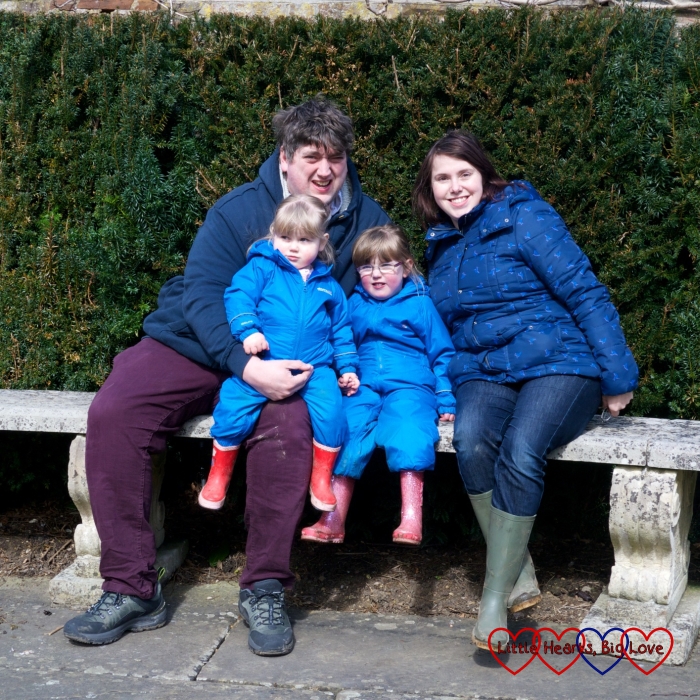 The walk through the Long Garden led us out into the woods.  The girls had both brought their little Easter egg buckets along. These were perfect for collecting “treasures” like pebbles and twigs. Sophie had a wonderful time collecting sticks along the way. Jessica wanted to just ride on Daddy’s shoulders instead though.  We found two more eggs in the woods. One was made from moss and the other was a very pretty one covered with orange flowers. 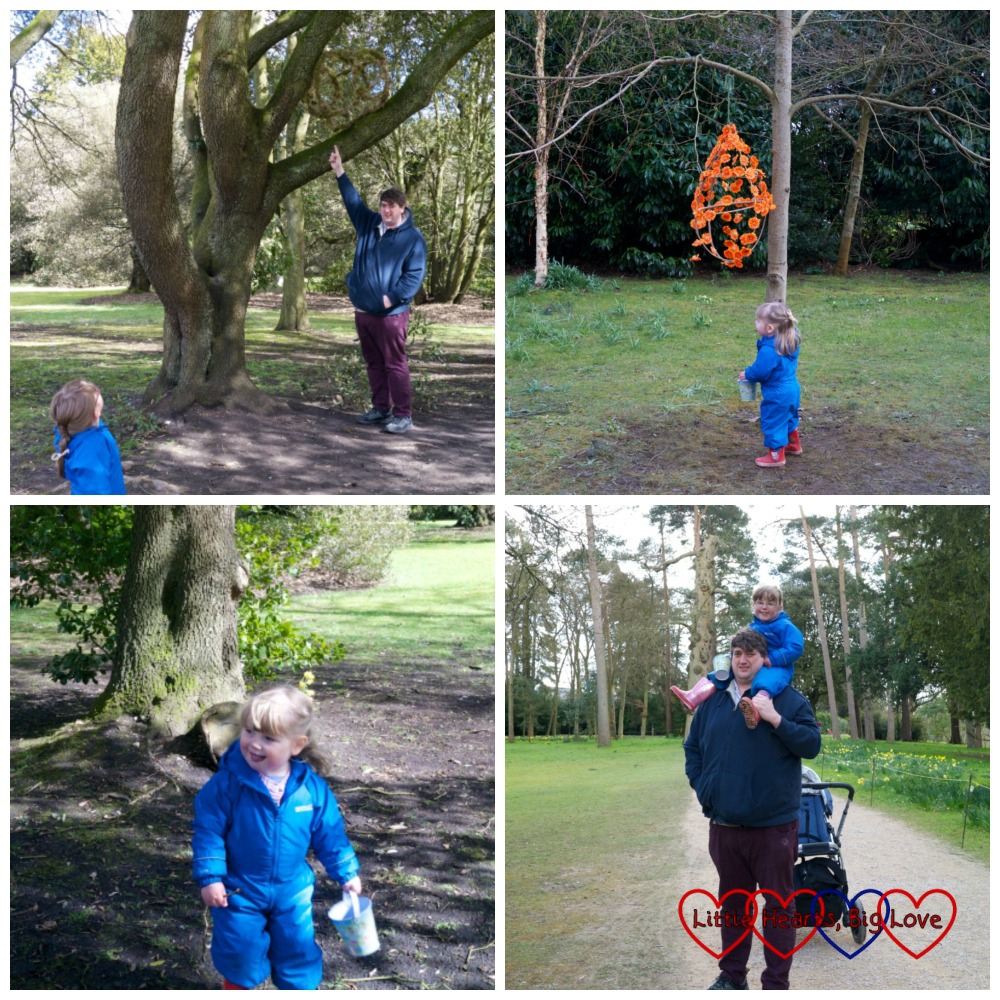 The lawns near the house were the perfect place for Jessica to practice some “roly-polys” and Sophie and Daddy joined in too.  I think hubby had more fun rolling around on the grass than the girls did! They certainly loved him joining in with them!  We took a slight detour from the trail at this point to head around the house, across the terrace and then down to the Parterre. There was lots of space here for the girls to run about (and try rolling down some of the slopes too!) 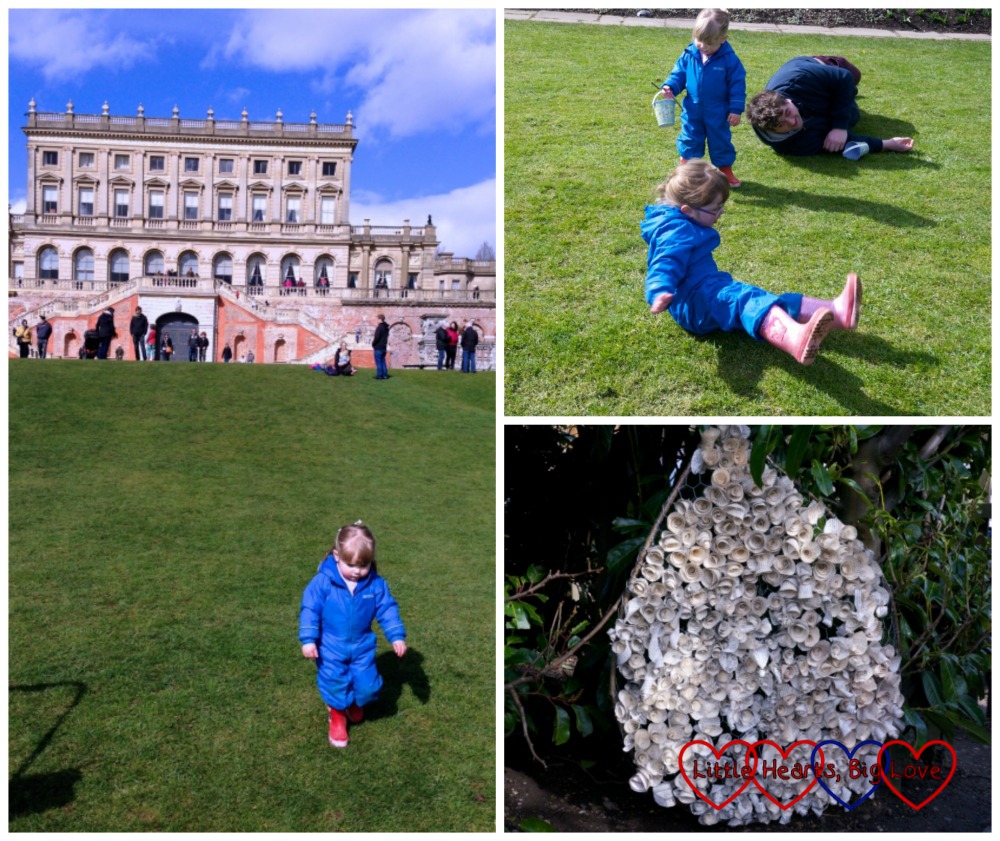 Back on the trail, we had two more eggs left to find. We found one with clock hands, near the Dovecote coffee shop where we stopped for a cream tea. The final one was near the Storybook Play Den.  As we walked along, I had one of those moments of pure contentment. A little girl’s hand in mine, hubby walking along with our other little girl, sunshine and a day outside all combined to make a perfect moment.  It made me realise that I’m at my happiest on days like this – spending time with my family exploring the great outdoors.

We passed by the Water Garden, and spotted a heron by the lake, on our way to find the final Easter egg.  “Oh wow!” Sophie said, as we got near the water, “that’s a lot of bath!” 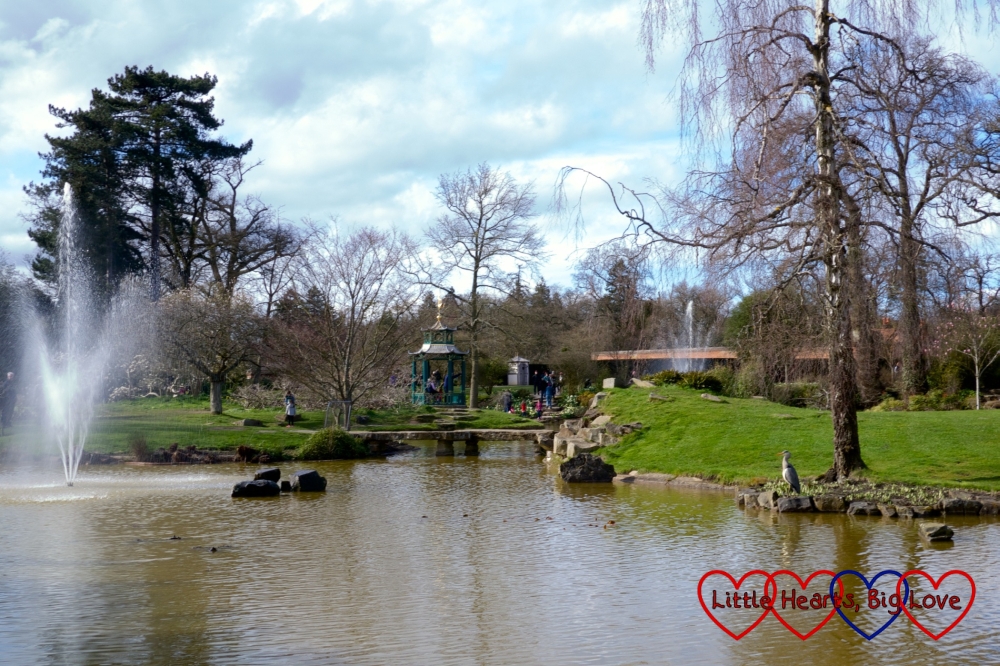 The final Easter egg was made from storybook pages.  We’d found all the Easter eggs on the trail although hadn’t quite managed to spot all the bunnies that were hiding along the way. We’d found four but there were 15 or so in total. It didn’t matter though. We still received a chocolate bunny for doing the trail. The girls shared this before making a beeline for the big muddy puddle nearby.  They spent about ten minutes happily jumping around in the puddle (with Mummy joining in the fun too!) – even the nearby play area had no appeal!  Thank goodness for wellies and puddle suits! 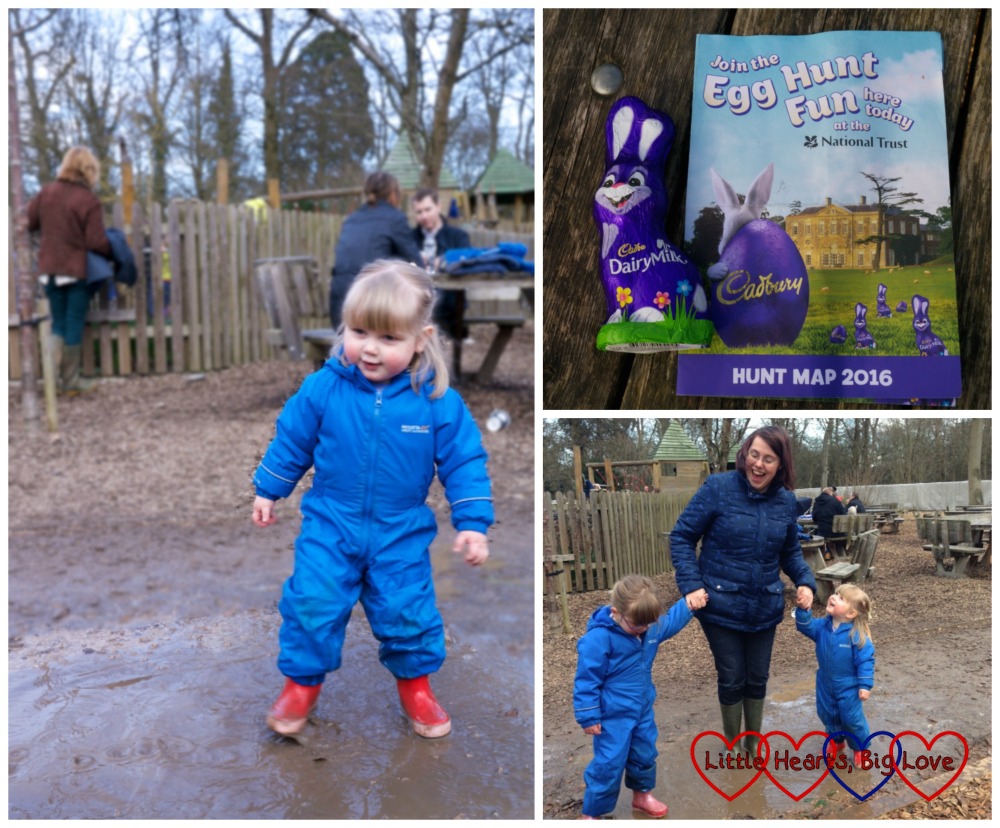 We had a lovely day out – and timed it perfectly weather-wise. It was just starting to rain again by the time we headed back to the car.  It might have been the first time we’d visited Cliveden but it certainly won’t be the last!

22 thoughts on “Hunting for Easter eggs at Cliveden”