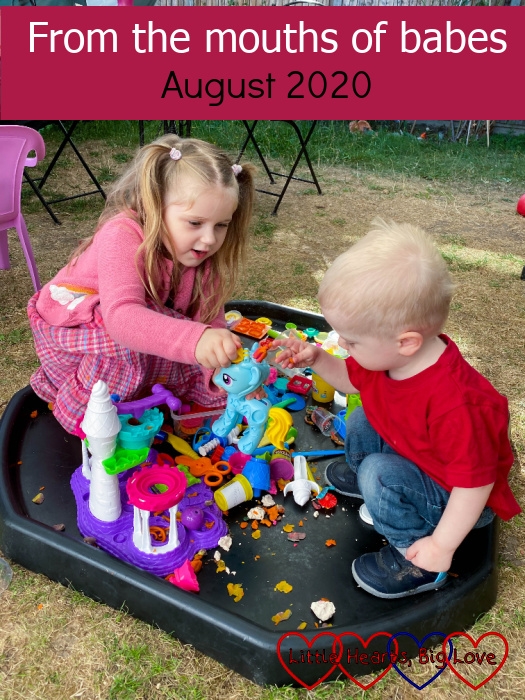 Sophie on the virus

“I’m so excited that Nanny can come and visit because you asked the people in charge of the virus if we could see Nanny and they said that we could!”

“I wish I was a fairy or a genie and could have three wishes. My first wish would be for Jessica to be alive again. My second wish would be to make the virus go away and my third wish would be for three machines – a hot chocolate making machine, a squirty cream machine and a marshmallow routine.”

“I wish we could turn back time so we could see Jessica again.”

“I’m not going to let Mummy cut my hair because she won’t do a very good job of it and I don’t want to look wonky and silly.”

Sophie on the importance of having breakfast

“Mummy you must have had breakfast this morning because you’re not angry.”

Cyroo = cereal (Jessica had the same way of saying cereal)

I love the way that Thomas will say “stuck!” when he can’t get to where he wants to be, e.g. if the stair gate is in the way, or if something is too high for him to reach.

If he needs his nappy changed, sometimes he will lie down on the sofa and say “smelly bum!”.

The other day Thomas was running across the sofa and threw himself face-down on the cushions. He then turned round to me with a big grin on his face and said, “your turn!”

This little video clip of Jessica was taken on our day out at Upton House during her last summer. She decided to put on a little show for me, and as she always did when performing, she finished with a bow. We used the clip of that bow to end her memorial video shown at her funeral. It felt like the right way to finish – Jessica taking her very last bow. How I miss days out like this with her. She was so much fun.