We first discovered Iver Environment Centre last summer and have been back several times. Sophie loves exploring the different garden areas there and the various activity sessions that they offer during school holidays. We met up with her friend F and his mum over the Easter break to take part in the Fabulous Fairies and Elves craft session. 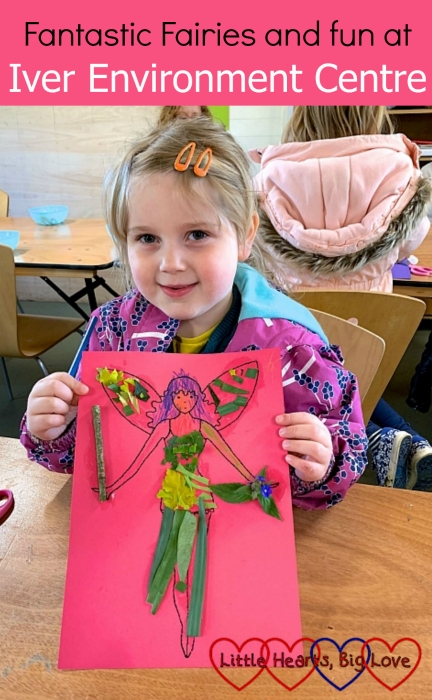 While we were waiting for the craft session to start, Sophie took a closer look at the raised ponds with her magnifying glass. She was quite fascinated by the pond skaters moving across the surface of the pond. 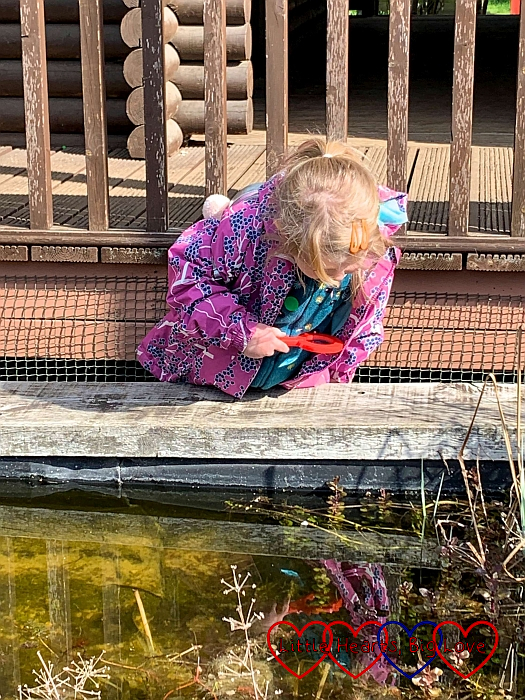 The craft session involved decorating a picture of a fairy or an elf with different leaves. The children each choose their picture outline. They also had some glue, a pair of scissors to cut off leaves for their picture, and a bowl to collect the leaves in. 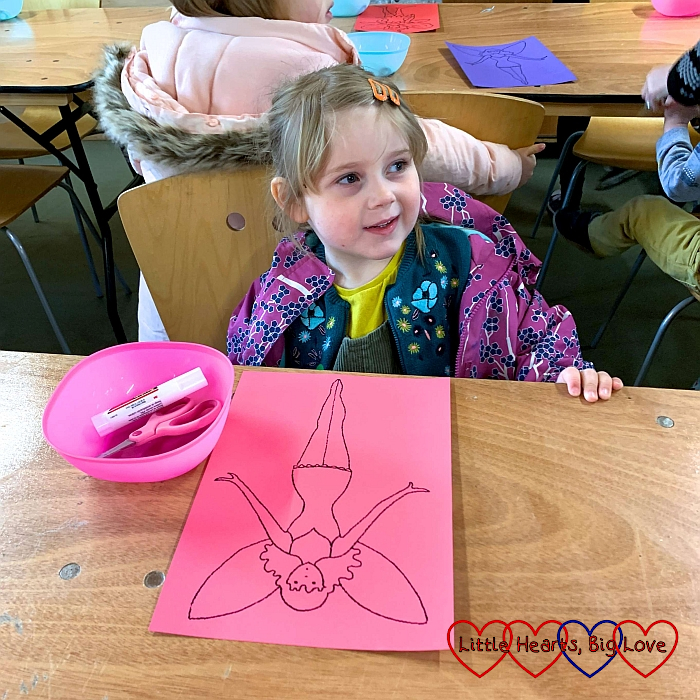 We started our hunt for the perfect leaves for the picture in the sensory garden before exploring some of the other garden areas to collect more leaves. Sophie also collected a stick to make a wand for her fairy. Once the children had finished collecting their leaves, we headed back to the classroom to stick them to the pictures. 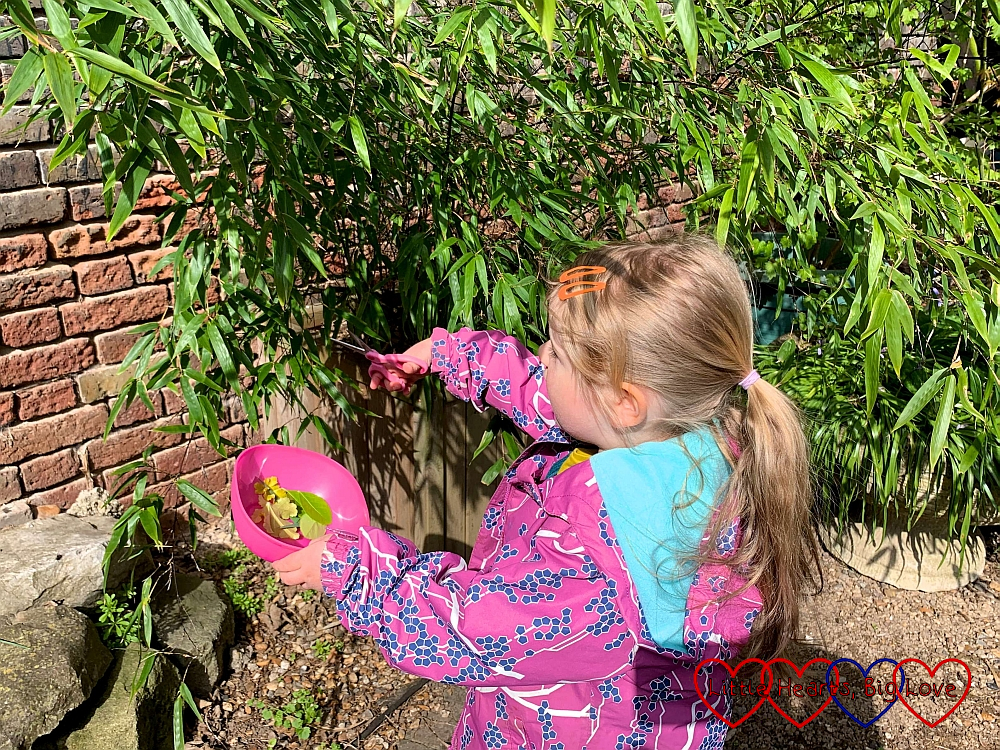 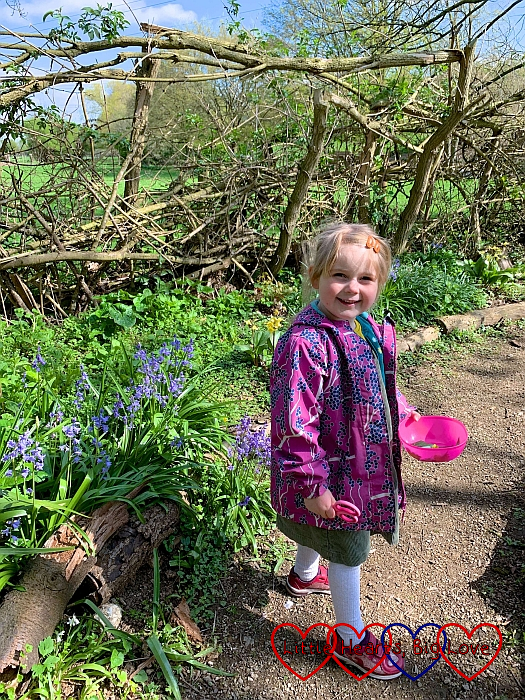 We’ve done this kind of craft before, but not for a while. It was interesting to see what a difference it makes with Sophie being that little bit older now. She wanted to cut her leaves into smaller pieces and stick them carefully inside the lines of her fairy picture rather than sticking whole leaves to her picture. 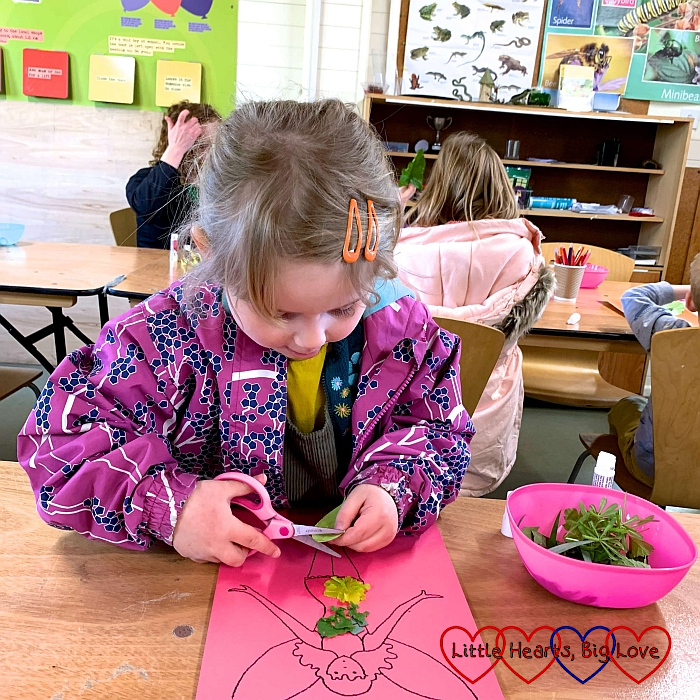 Once Sophie and F had finished their pictures, we left them to dry and headed out into the orchard for some games. Sophie and F were soon playing a game of Connect 4 – or at least until Sophie started to get frustrated that F wasn’t following her rules! Thankfully there were other games to play instead! 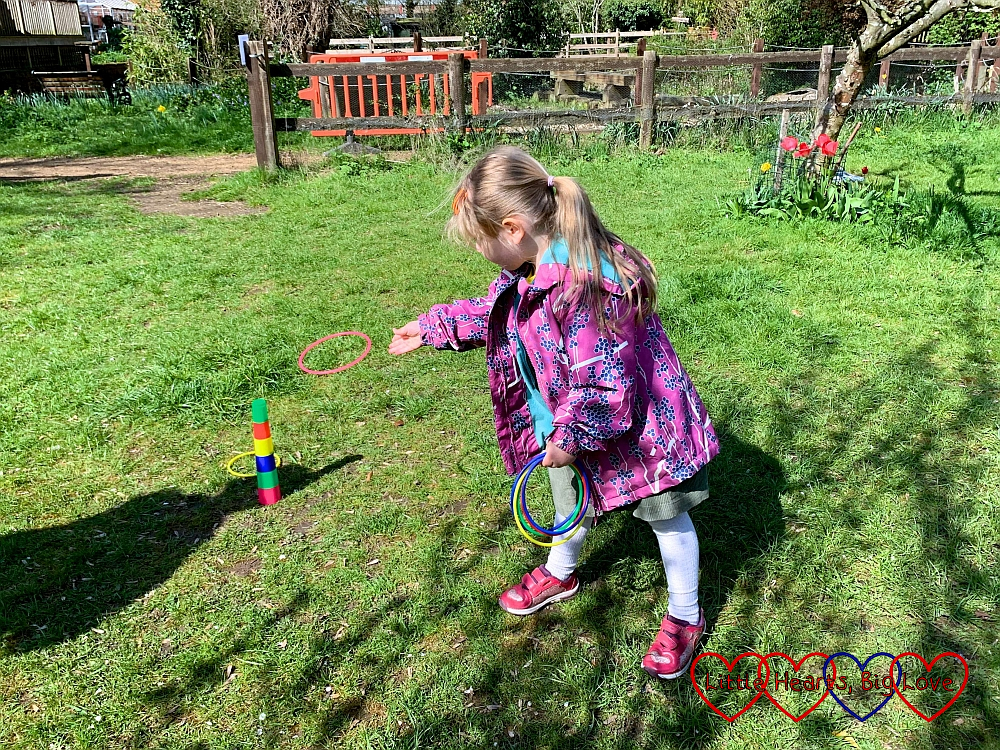 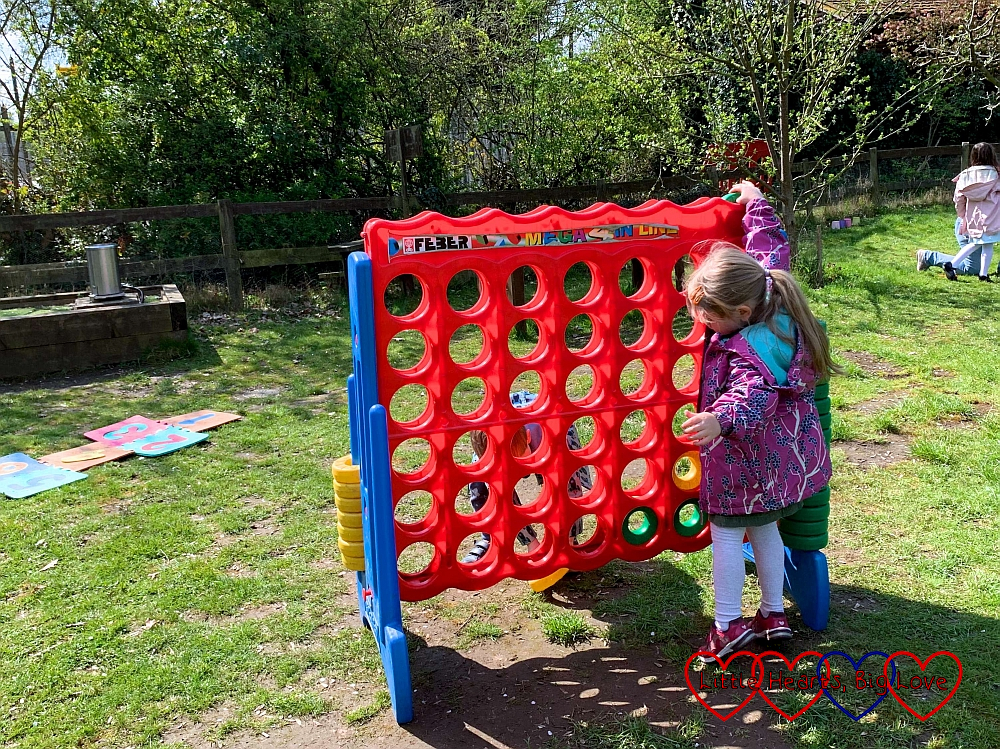 As well as the games in the orchard, there is a small play area which we haven’t really explored on our previous visits. Sophie and F had a wonderful time climbing up the hill and sliding down the slide. 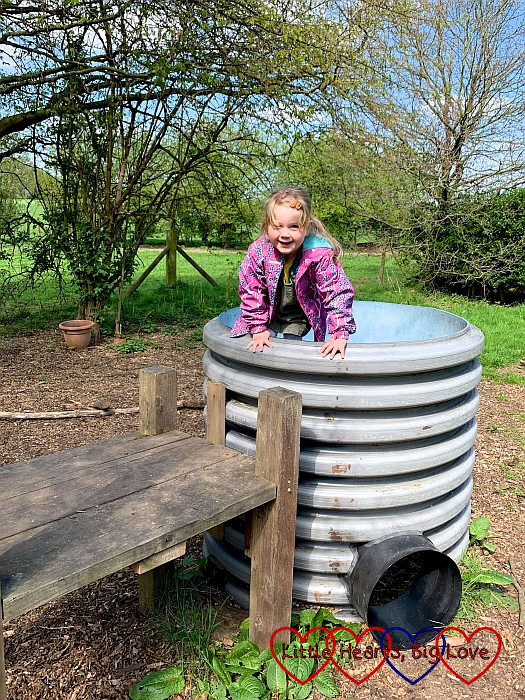 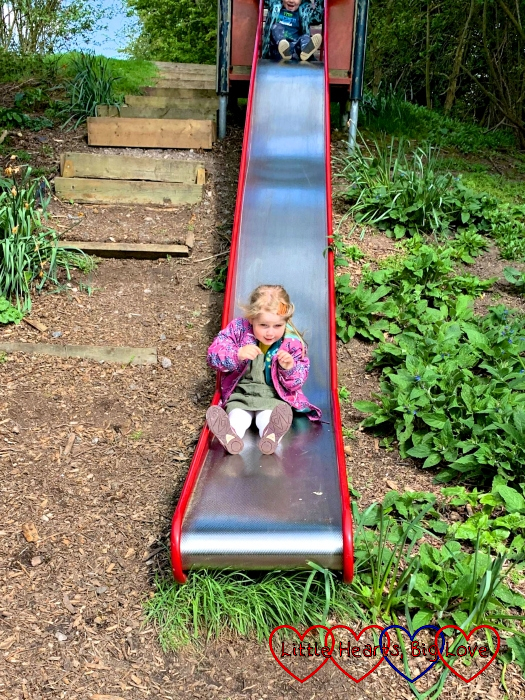 “Steady on!” Sophie said, when another child bumped into her as she was using the rope to pull herself up the hill. It sounded so funny to hear her come out with such a stereotypically British expression – and one that I don’t think I use myself! I wonder where she picked that one up from. 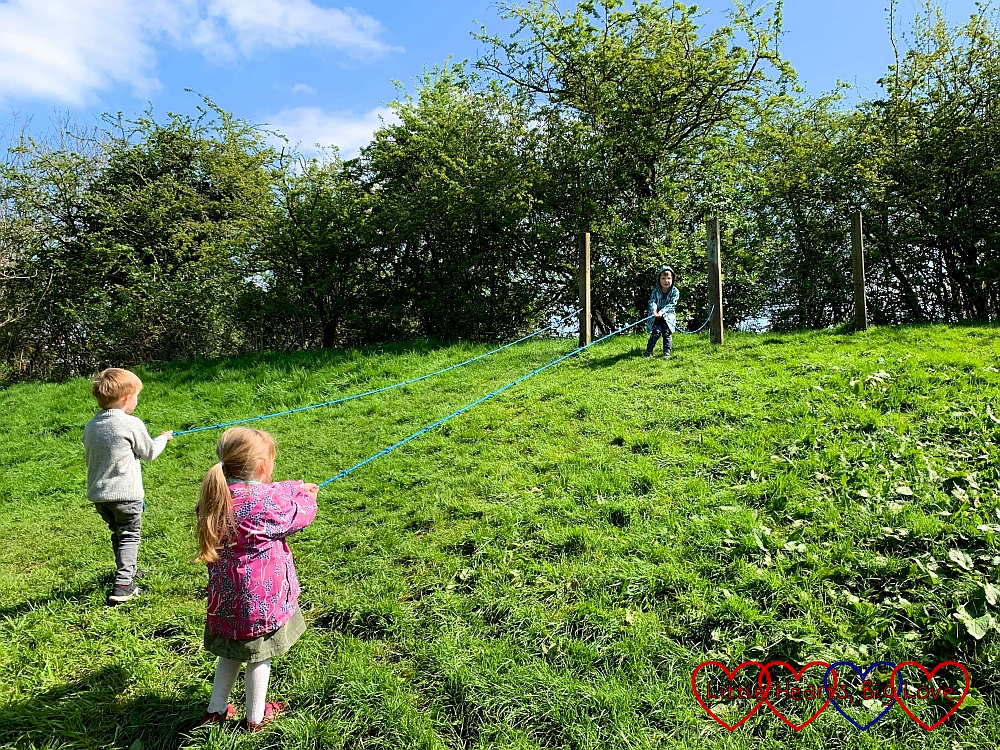 Hills, of course, always remind us of Jessica and her love of rolling down them. It does make me smile that Sophie never fails to mention that whenever we are near one. This is clearly a memory that really sticks in her mind and how lovely that Jessica is still always such a part of days out because of little memories like this. Sophie isn’t quite so keen on rolling down hills as Jessica was, but she gave this one a go. 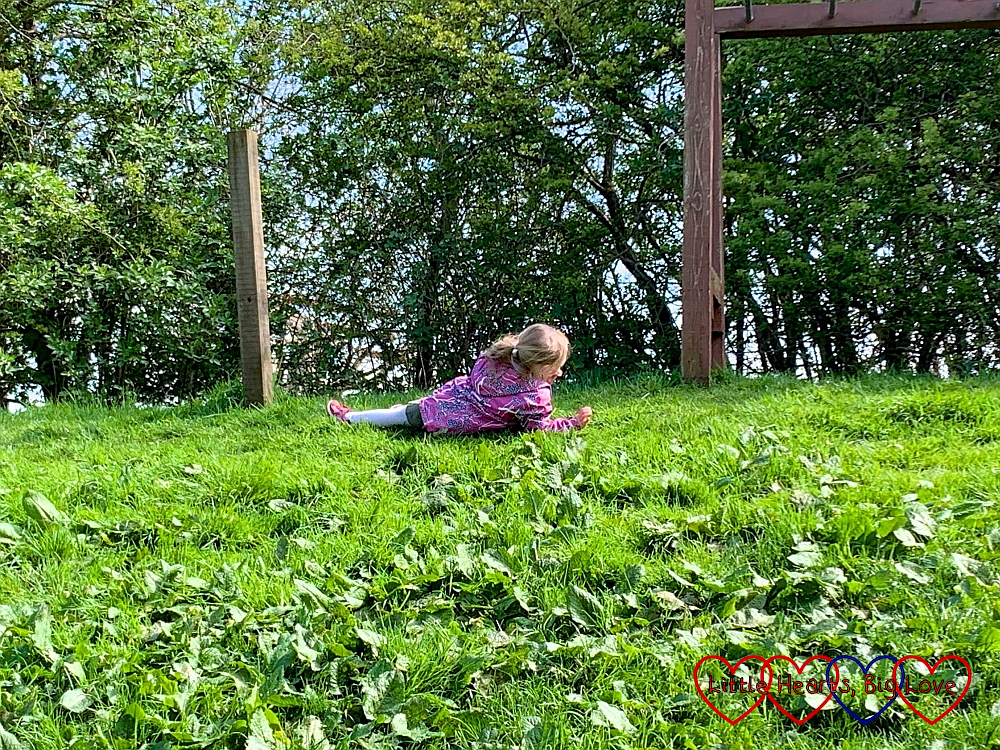 The cows from the neighbouring field came over to watch the children playing at one point. They seemed quite interested in what was happening on our side of the fence. I thought Sophie and F might be interested to see the cows up close, but they were much more engrossed in their play. 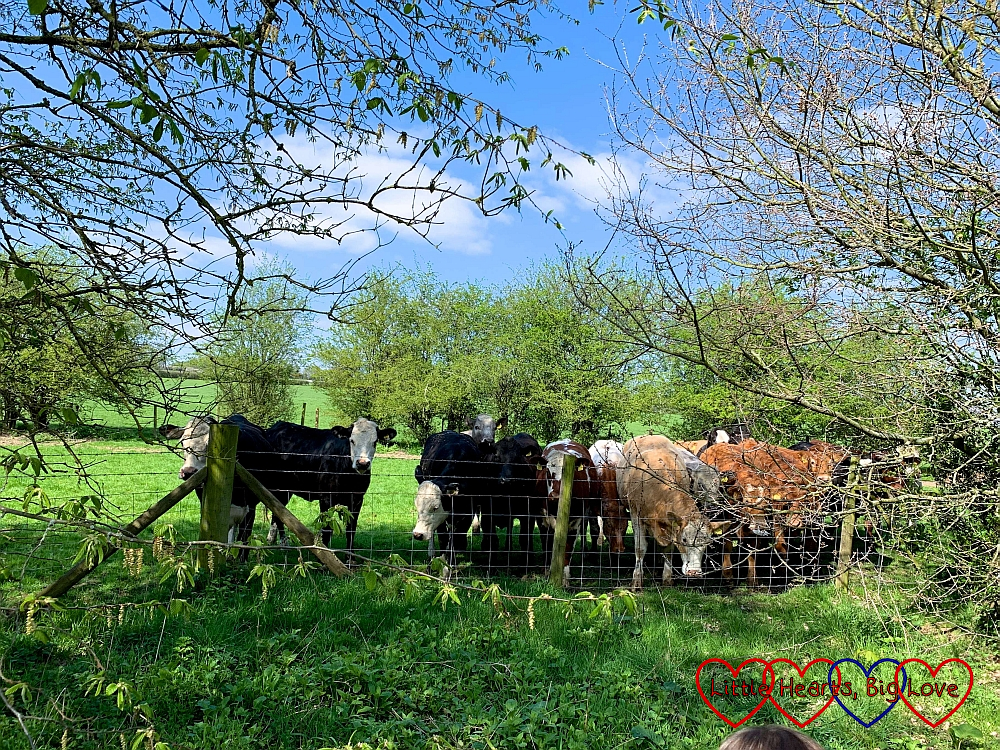 For Sophie, I think having someone of a similar age to play with is the best thing about a day out like this. Play dates have become so much more important to her. It is lovely to watch her having fun like she would have done with Jessica. She has coped amazingly well with the loss of her sister, but she struggles at times with not having that constant playmate that she was used to. Days out like these help make that loss a little easier to bear. 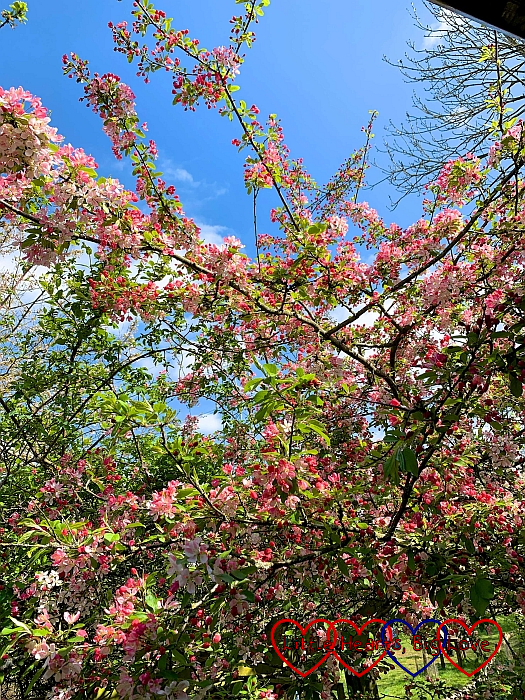 Visiting Iver Environment Centre – what you need to know:

5 thoughts on “Fabulous fairies and fun at Iver Environment Centre”