the Fort Nelson is one of several forts on Portsdown Hill. These were built in the 1860s to protect Portsmouth against the threat of an enemy attack from the French. They were never needed for this as the French threat disappeared after their defeat in their war against Prussia in 1870. The forts were later adapted and used during World Wars I and II. These days, Fort Nelson is a museum and home to the Royal Armouries artillery collection. 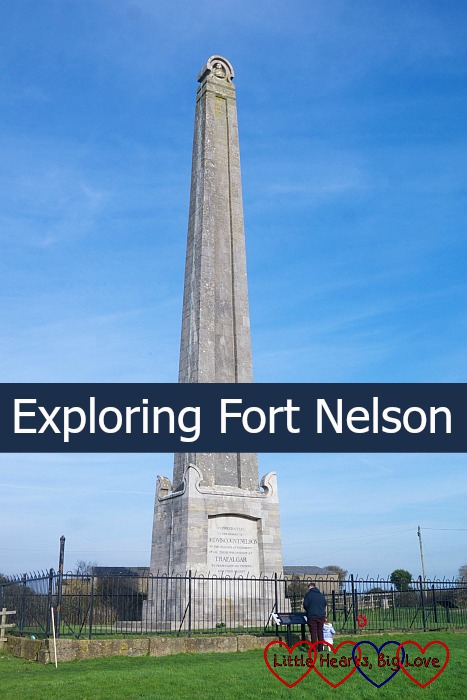 Although I grew up near Portsmouth, this was my first visit to Fort Nelson. We decided to visit having discovered it was (a) open between Christmas and New Year, (b) free and (c) had ‘treasure box’ activities aimed at preschool children. 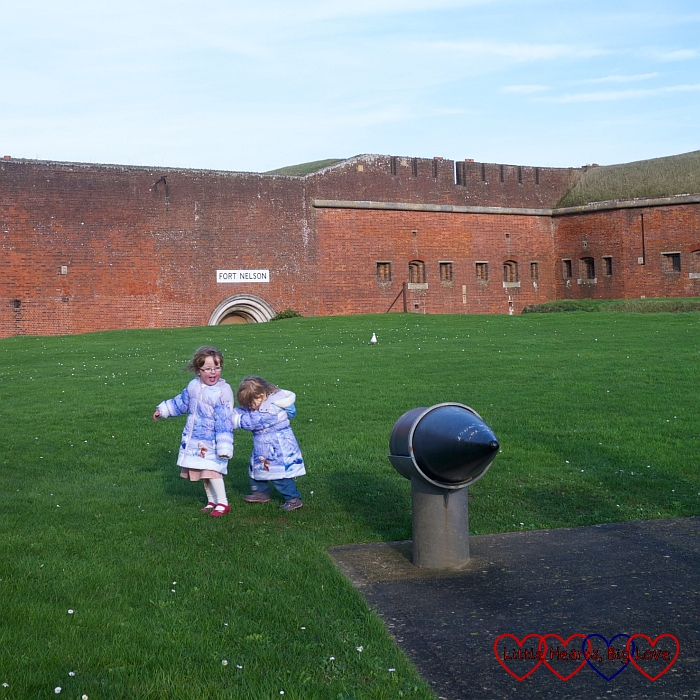 Fort Nelson is home to the original Nelson’s column – the first monument built to commemorate his victory and death at the Battle of Trafalgar. The column also formed part of the “Walk the Fort” treasure trail which was running at the time of our visit. We’re big fans of treasure trails. They’re a wonderful way of encouraging the children to go for a walk and looking out for clues makes it much more interesting. 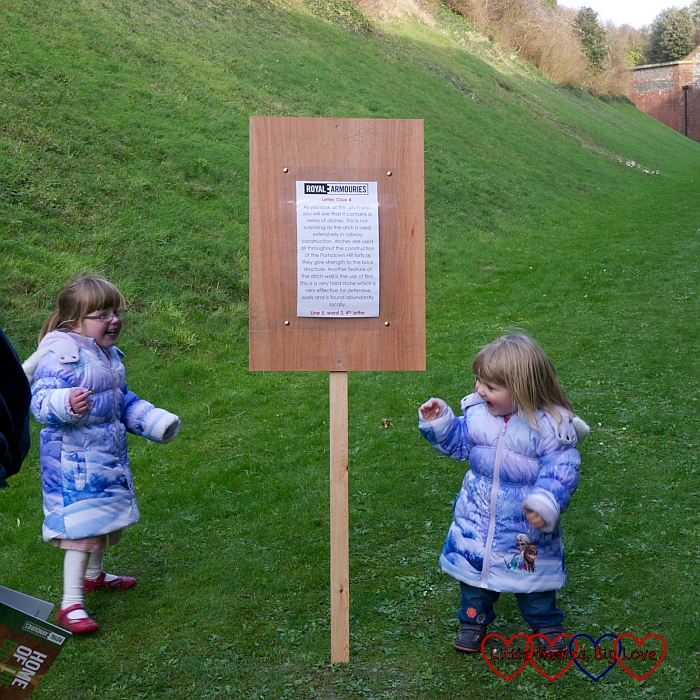 Most of the walk was around the ditch surrounding the fort with the clues displayed on noticeboards along the way. The girls were mostly interested in the daisies, buttercups, sticks and stones which they found along the way. Jessica wasn’t very impressed that some of the noticeboards were a bit wonky though!

We quite enjoyed our walk around the fort, being out in the fresh air, and filling in the answers to the clues. However it was quite annoying to reach the end of the trail and find we had to turn around and retrace our steps in order to get back to the museum entrance! 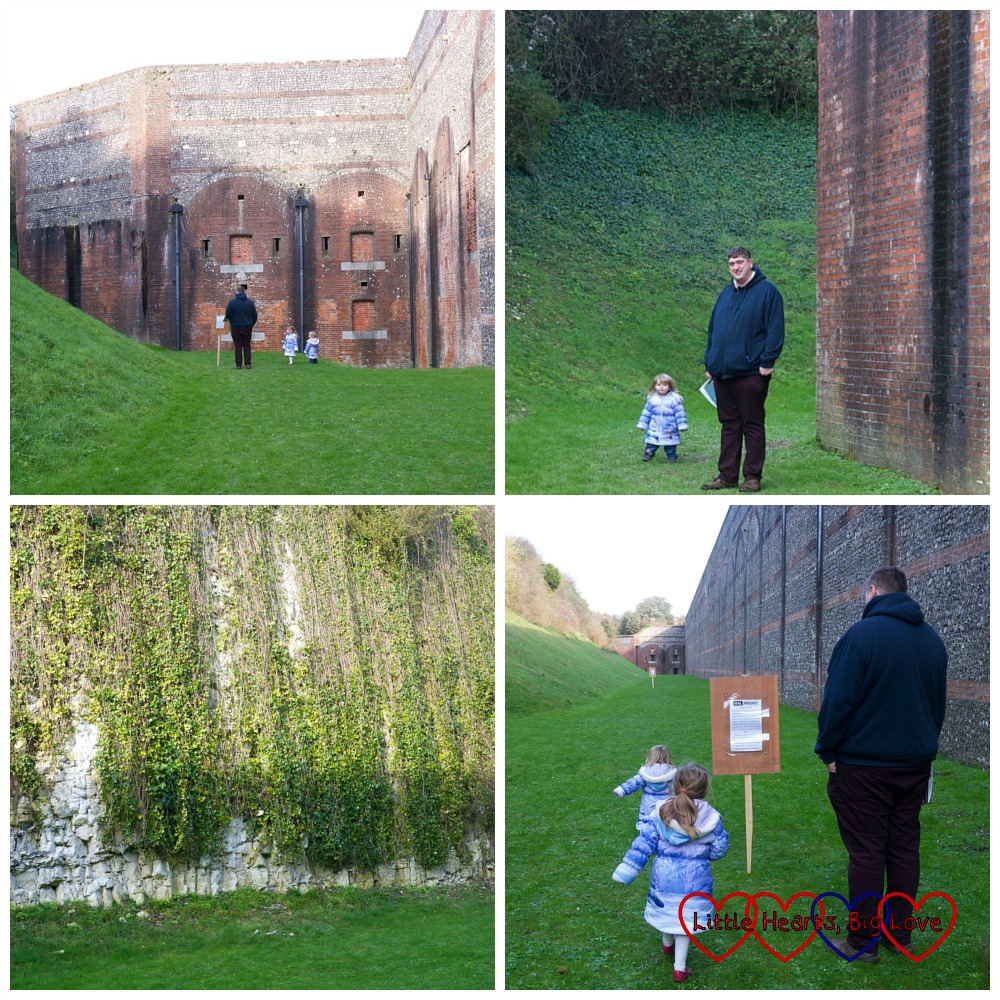 As a result of finishing the trail, we were entered into a prize draw. We also received a 20% discount in the café which was very handy as it was now lunchtime and the girls were very hungry after their walk!

After we’d had lunch, it was time to explore the inside of the fort. There were two treasure boxes available for preschool children to use. In order to access them, we just had to ask at the information desk. We chose the box in Sergeant Dobson’s kitchen which was aimed at 2-4 year olds. A member of staff then escorted us to that room and unlocked the box for us. 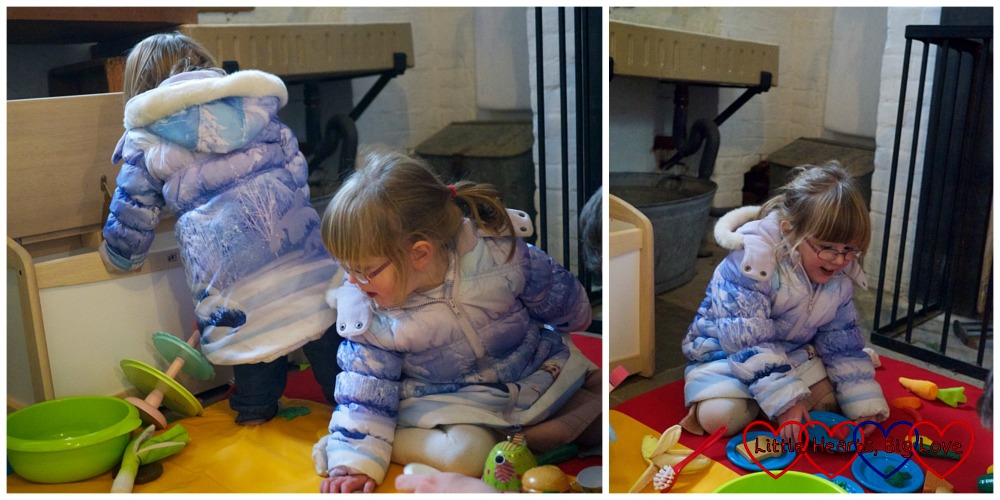 The box contained play food, toy cups and plates, crockery and cutlery and books about food. There were some sheets of suggested activities to help link what was in the box to the items in Sergeant Dobson’s kitchen. The girls preferred to play freely with the contents of the box rather than being guided though. Hubby and I quite enjoyed sitting on the mats on the floor while Jessica and Sophie prepared a little picnic/tea party for us!

We’d rushed through some of the other galleries on the way to the kitchen. Once the girls had finished playing, we packed up the box and retraced our steps. The areas that we had missed focused on life inside the fort, on recruitment and on medical care (an area which I found especially interesting). I was pleasantly surprised by how much there was for Jessica and Sophie to do. There were activities for children in most of the galleries. While the girls were a little young for some of the activities; others, such as the dressing up area, kept them amused for ages! 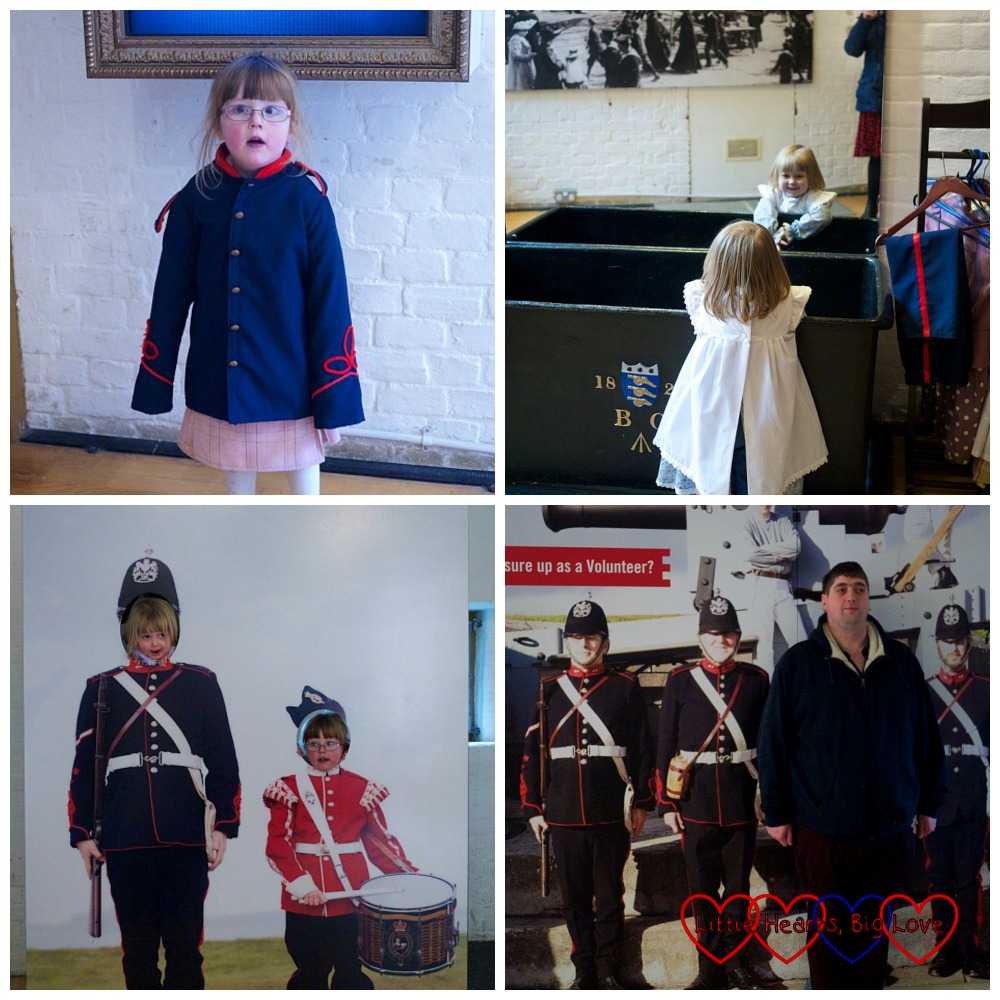 The rest of the museum mostly featured the artillery collection. Hubby found this a lot more interesting than I did. I have to confess I had lost interest in all the different guns long before we reached the end! There is usually a daily gun firing which is at 1pm each day. However, a technical error at meant it didn’t happen on the day of our visit. I wasn’t too sorry about this though. Loud noises scare Jessica so I know she wouldn’t have liked it. 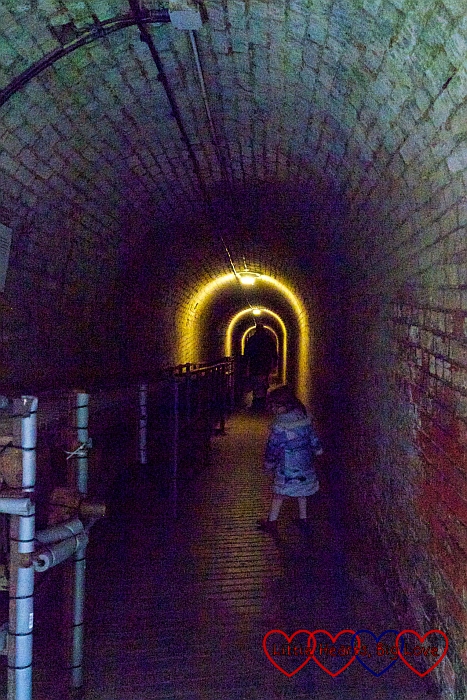 By the time we were ready to go home, it was late afternoon. I’d thought initially that we’d spend a couple of hours at most at Fort Nelson. I was quite impressed at just how much there was to see and do. We all enjoyed the day out and had a nice walk in the fresh air. It’s probably not somewhere I would choose to visit again (artillery collections really don’t interest me!) but I’m glad we went once.