I have to confess that sometimes I drag my family out for an outdoor adventure purely because I need to write an outdoors post for the Country Kids linky! Our most recent geocaching adventure was one of those occasions. I’d spotted a nice loop of geocaches around Saxon Lake in Harmondsworth – perfect for an afternoon walk.

Harmondsworth is one of the villages under threat due to the proposed third runway at Heathrow. We could clearly hear the noise of the aeroplanes at nearby Heathrow during our walk. I imagine you must get used to it to some extent if you live in the village though. 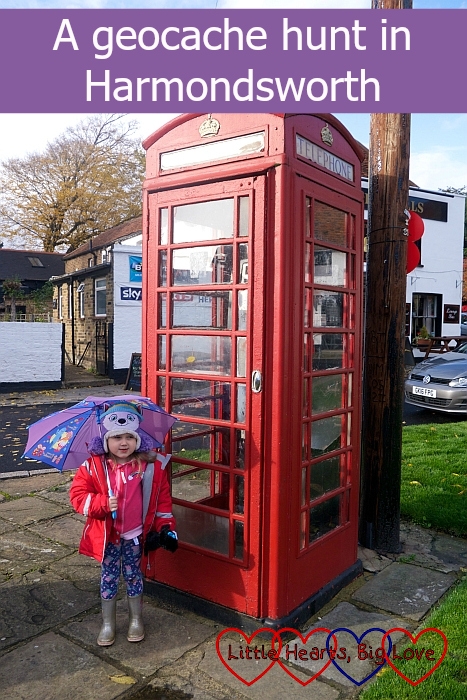 We parked easily near St Mary’s church. The village was decorated with lots of red poppies in honour of the centenary of the WW1 Armistice. 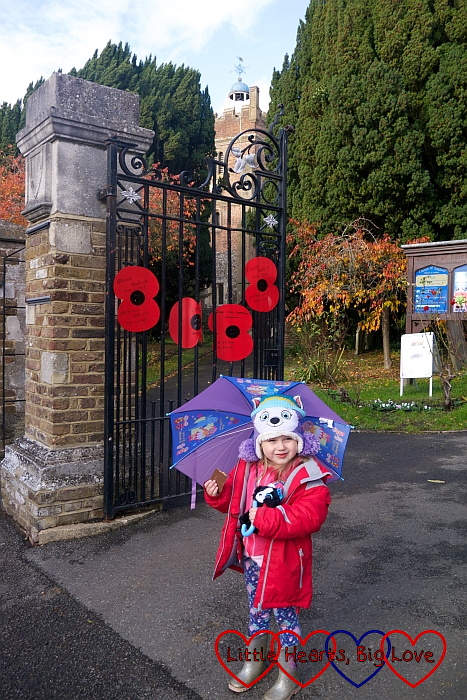 The first set of coordinates was for a multi. This is a geocache which involves two or more locations to find the cache. In this case, we had to use some information at the posted coordinates to solve a puzzle. This gave us the coordinates for where the cache itself was hidden. We solved it but decided to leave it for the end of our walk if time allowed as it took us in a different direction to the one I had planned.

The weather was dry as we headed off on our walk although I was aware of the moody clouds heading over. The weather forecast was for showers in the afternoon. Hubby hadn’t been able to find his waterproof at home and a little way into our walk realised he had also left the umbrella in the car. I did offer to turn back but he was happy to carry on. Sophie had both a waterproof jacket and umbrella and I had an old waterproof jacket that hubby had outgrown. It was just the right size to cover both me and Thomas in the sling. 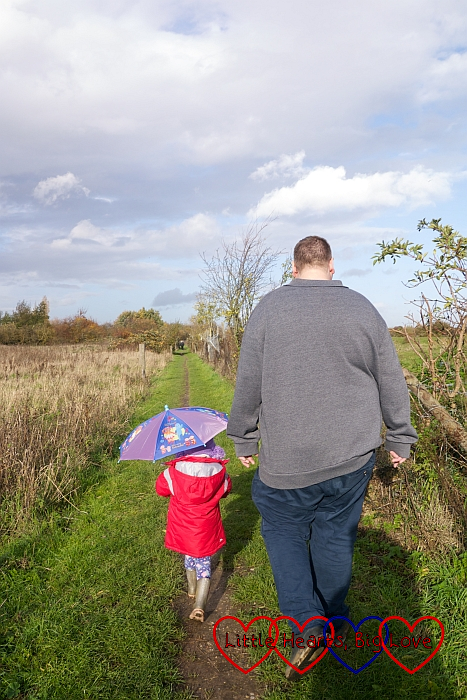 Hubby found our first geocache easily. He’s not really into geocaching though so other than the first one, most of the hunting was down to me! 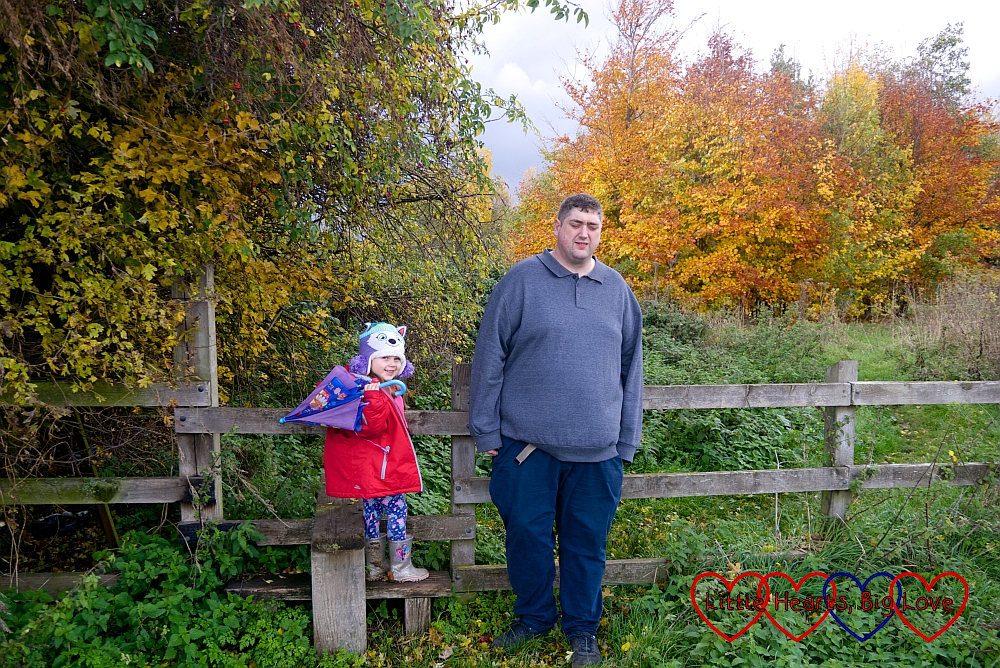 We didn’t manage to find the next two – a combination of Sophie being impatient to move on and the threatened rain starting to make its appearance limited my search. 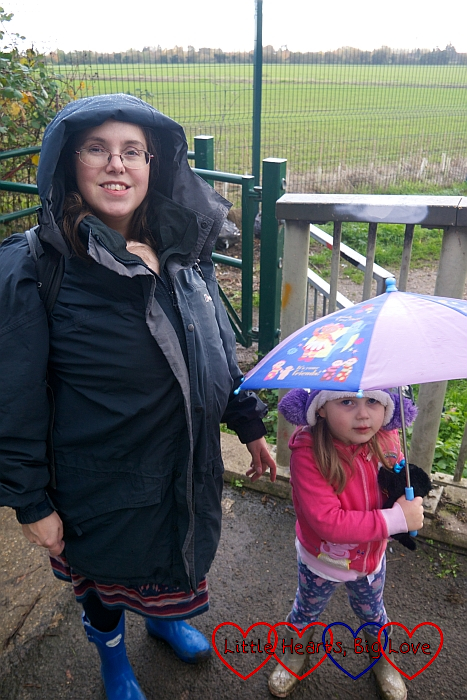 The initial shower was brief though and as our walk took us into the woods, we were somewhat protected from it. Sophie was unwilling to lend her umbrella to Daddy. She didn’t want to wear her jacket though so gave him this instead. The hood just about covered hubby’s head, but it didn’t provide much protection from the rain otherwise! 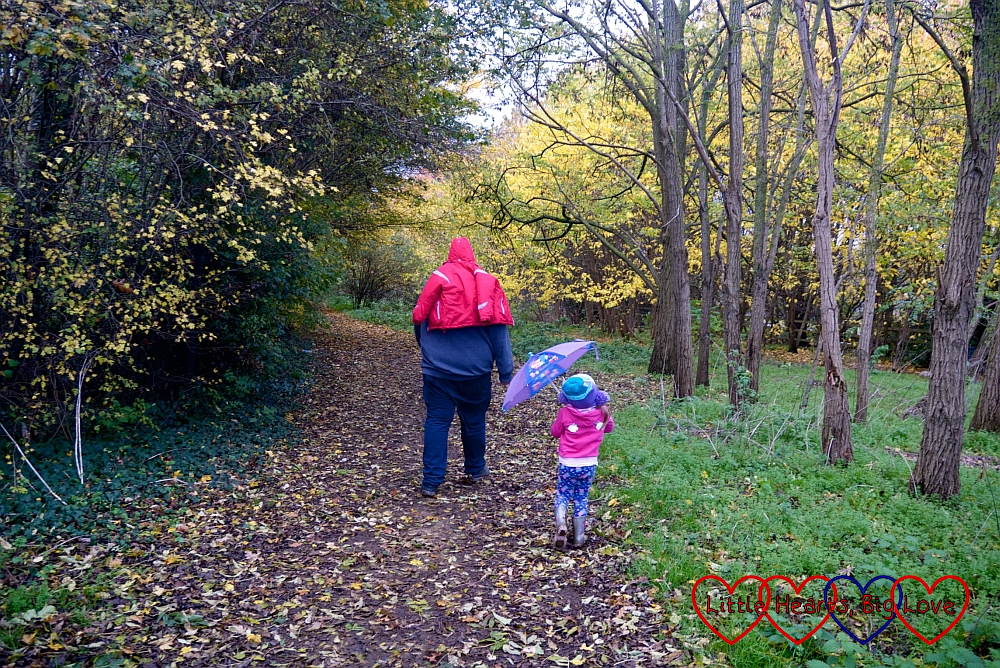 The next two caches were nice easy finds. One was hidden inside a metal lizard – my favourite find so far. We also found our first trackable item which we’ll re-hide next time we go geocaching. Sophie was a bit disappointed when I told her we couldn’t keep it! 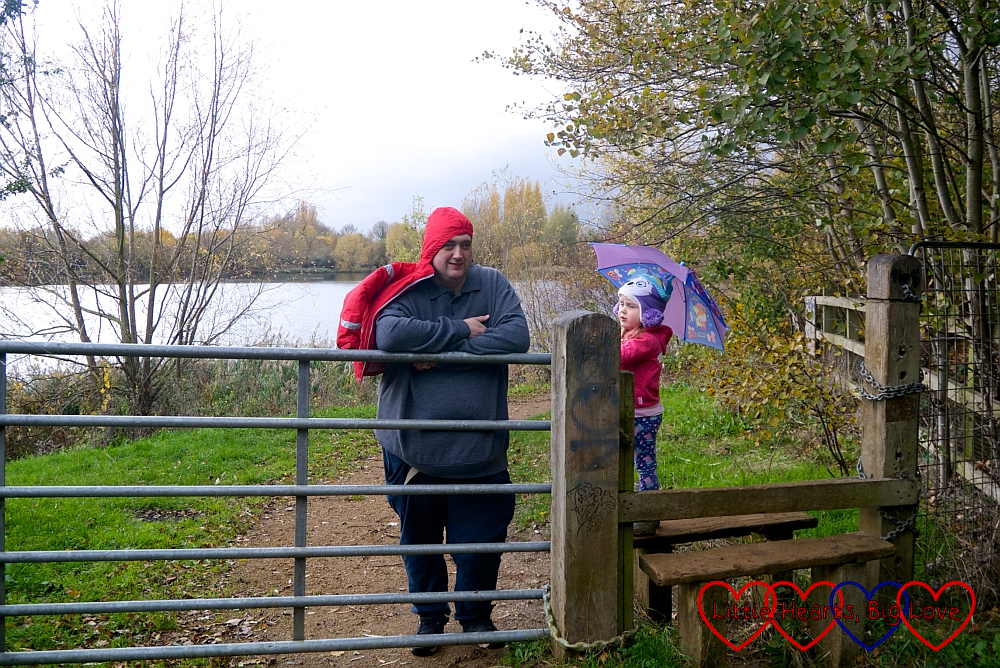 As we headed off in search of the sixth cache on our list, the heavens suddenly opened. We were only two-thirds of the way around the lake and a fair distance from the car or any form of shelter! The geocache hunt was abandoned as we tried to get back as quickly as possible. Thomas managed to stay dry inside my jacket. Sophie and I both were a bit on the soggy side but poor hubby was absolutely drenched! I thought he’d be grumpy about it, especially given my reason for dragging us all out! He stayed cheerful though and pointed out that he’d been out in similar weather many times during his time in the Boys’ Brigade.

Sophie was the least impressed at the change in weather. “Mummy, let’s not go here ever again!” I might have to go back for the geocaches I missed when she’s at school. 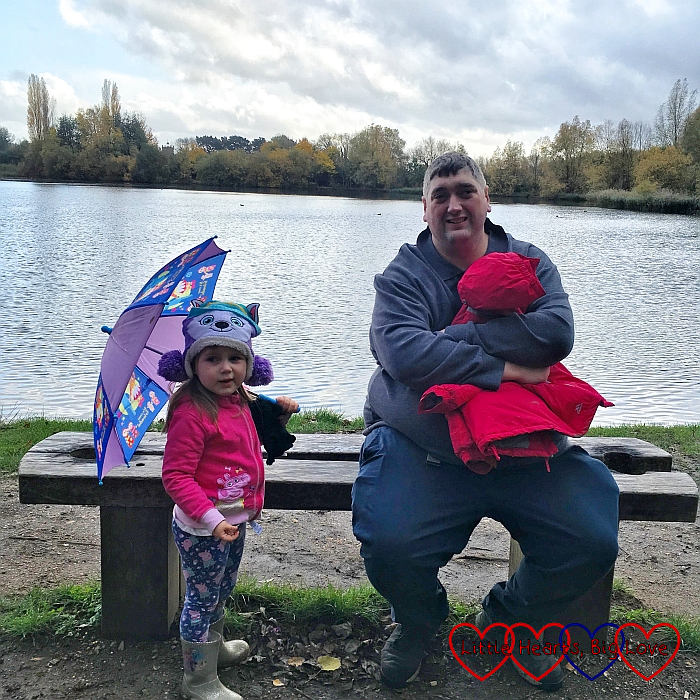 In spite of the rain, it was good to get out and about. One of the things I have always loved about Country Kids is that it does inspire me to get out with my family, even if the motivation to do so is so I can write about it! We all feel better for getting outside, whatever the reason for doing so, and we’ve had some fun family adventures that we might not have had otherwise.

10 thoughts on “A geocache hunt in Harmondsworth”